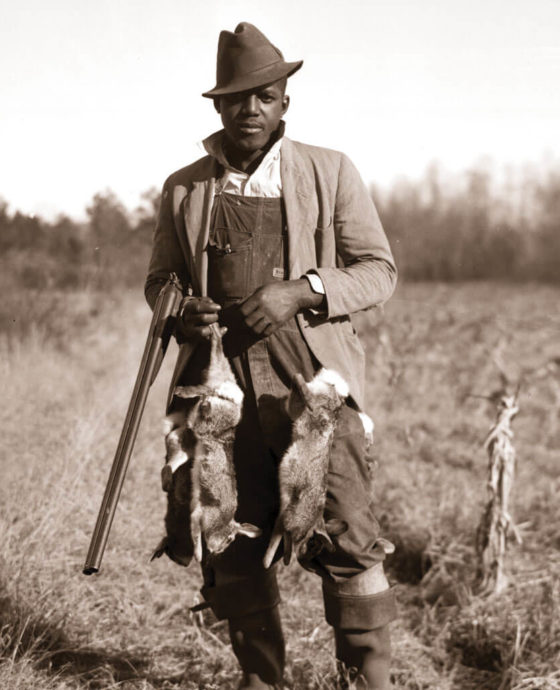 For more than 70 years, from the 1880s to the 1950s, Chatham County was overrun with rabbits. These bunnies were not typical; they were larger, more like Australian jackrabbits. By all accounts, they were sweeter and more succulent than the typical hare.

The rabbits of Chatham multiplied quickly, and every Chatham County yard from Bynum to Siler City brimmed with bunnies.

Soon, the Chatham rabbit became fodder for humorous conversations around the state.

On February 4, 1884, the Chatham Record reported on a rich Raleigh merchant describing a man he just met. He said he did not know the man’s name, but he knew the man was from Chatham County because “his breath smelled of fried rabbit and corn whiskey.”

And in 1907, Chatham County Sheriff Johnny Milliken vented about Chatham’s situation to the Chatham newspaper.

“People treat our rabbits as a joke,” he said. “But really the cottontail forms a big item in the economy of our county.”

Yes, people blamed the raffish rabbits for many things — terrorizing gardens, tunneling under foundations, getting trapped inside wells, and polluting the water. The rabbits, for many, were a menace. The Chatham rabbit was even blamed for the loss of a local election.

A daily newspaper in Greensboro justified the Republican Party’s defeat in 1906 like this: “Election Day was an ideal rabbit-hunting day, and being a general holiday the temptation to go rabbit hunting for a few hours before voting must have been too strong for a number of the Chatham voters. We further conclude that the plentifulness of rabbits and the ideal character of the day must have proved too much for the men who had intended to bring home their bag in time to vote.”

People in Chatham County were serious about their rabbits. Soon, the rest of the nation would be, too.

Selling Chatham rabbits began in earnest in 1880 when the Chatham Record reported about the “vast quantity of rabbit skins” people shipped to Greensboro and Raleigh and sold for 3 cents each.

But it was the timely juxtaposition of the rabbits and the railroad that made Chatham County the rabbit capital of the Carolinas. With the opening of the railroad in 1884 in western Chatham County, the Chatham rabbit morphed into a food commodity and source of revenue as locals shipped the meat to other states.

In 1910, people shipped nearly 20,000 rabbits from Siler City, and by 1912, businesses shipped 26,000 by rail cars to places like New York and Connecticut. Those quantities didn’t include the ones shipped from the western part of the county, making the total 35,000 rabbits shipped from Chatham alone. That year, rabbits added nearly $15,000 to local coffers.

Henry London, editor of the Siler City Grit, cheered on the Chatham rabbit in 1913. “Even as Kentuckians think corn in the liquid state is nowhere else as mellow, so Chathamites know that nowhere else are rabbits so prolific or as delicious as in her own confines,” he wrote. “But Nov. 1st is here, and the rabbits will get it in the neck.” 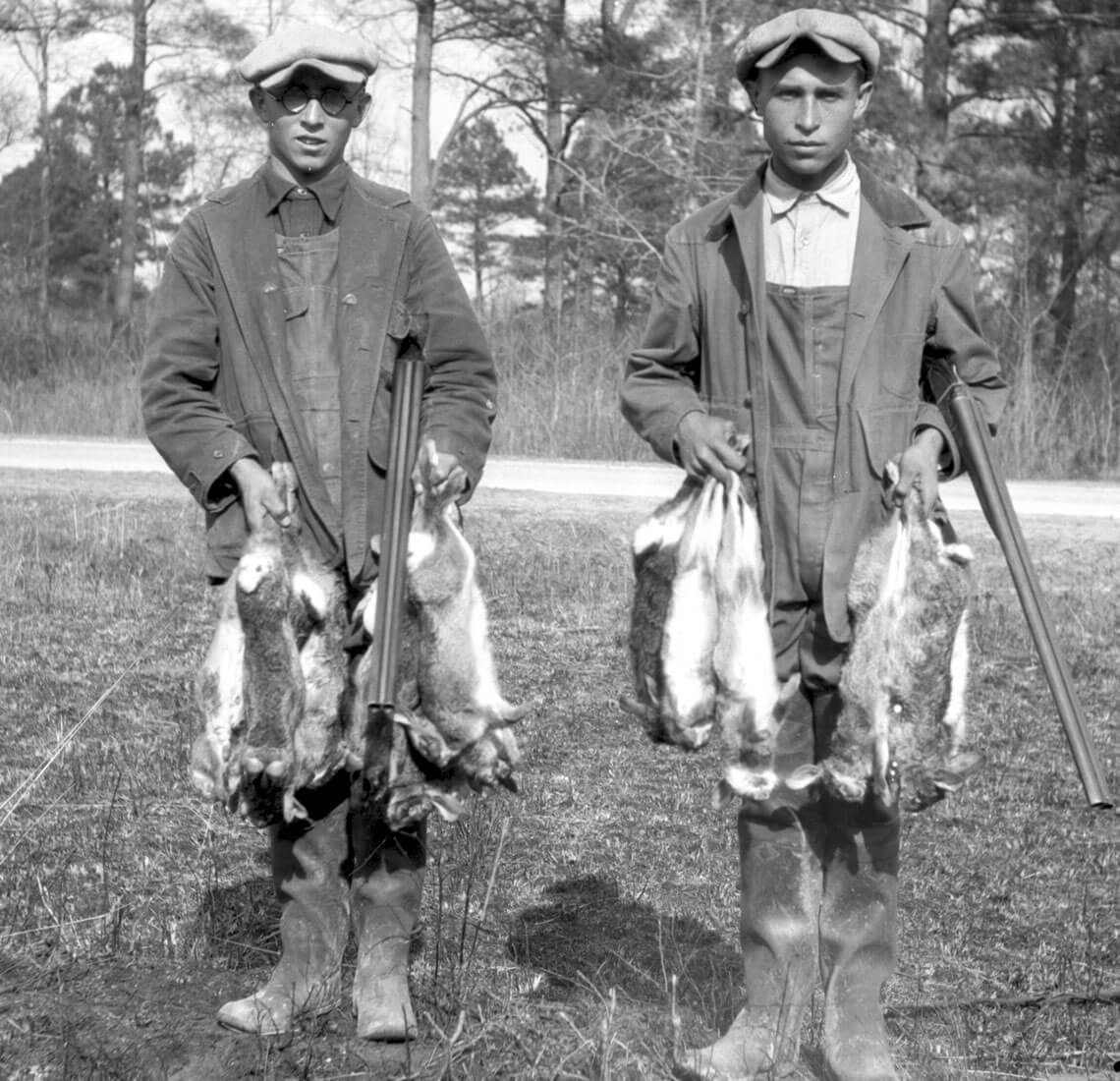 Businessmen sent letters to the local newspaper, The Chatham Record, pleading boys to trap as many rabbits as they could. photograph by State Archives of North Carolina

The quicker, the better

Every Chatham County family has heard of the Chatham rabbit. Oral history is full of stories handed down from generation to generation. For all the rabbit’s raucous notoriety, very little was written on the topic.

Brent Glass of the Southern Oral History Program captured one of the most colorful accounts in 1976. He gathered interviews from old-timers throughout each of North Carolina’s 100 counties. Glass snagged a conversation with John W. Snipes of Bynum, who offered a story about the Chatham rabbit. Like many young people, Glass had never heard the story before.

“What would you kill them with, guns?” Glass asked.

“Sticks and guns, and the dogs’d run them down and catch them. We’d just take the entrails out in real cold weather and hang them up in the smokehouse with the hide on them and dry them out. Then we made rabbit hash and cooked them. Chatham County has been blessed with rabbits: just thousands and hundreds of thousands of them way back 75 years ago.”

Snipes was right. Hunters packed dressed-out rabbits with skins still attached in a briny water solution and stored them inside barrels during the cold winter months, with the frigid temperatures serving as the only source of refrigeration.

One man couldn’t wait for his Chatham County rabbit, and in 1909, he placed an ad in the Siler City Grit. G.O. Sanders of Boston, Massachusetts was in such a hurry for hares, he offered people cash at the nearest express office as soon as they shipped the rabbits. He gave a two-month window for hunters to send him 3,000 hares, and they had to be shipped “open,” so they wouldn’t spoil. “The quicker you ship, the quicker you get your money,” he said.

With all the revenue from rabbits pouring into the county, Chathamites began to take pride in their local cottontails. Chatham County became known for the finest rabbit delicacies in the world.

In 1906, the Chatham Record wrote about a Chathamite who had a conversation with a man from Connecticut. The man knew all about the Chatham rabbit.

“Oh yes, that is the county where the Populists wanted to make rabbit skins a legal tender,” he said.

By 1914, the Raleigh News & Observer reported that the rabbit had made its way into Raleigh restaurants.

“Raleigh people are very fond of the Chatham rabbit, and it has been said that they consume so many of them during the fall and winter season that they gradually take on the ‘rabbit lope’ when walking around on the terrestrial sphere,” one article stated. The rabbit lope was a phrase used to describe the way rabbits scampered about in a loping, hopping hustle.

The late Wade Hadley,  a Chatham County historian, of the Chatham rabbit in the North. The president of a Raleigh bank reported seeing Chatham rabbit on menus at hotels in New York City; Baltimore, Maryland; and Norfolk, Virginia, during a trip in early 1914.

The rabbit mayhem reached a feverish pitch that same year when a Siler City store owner named Capt. W.S. Durham wrote an open letter in the Siler City Grit. Durham, who founded his store on South Chatham Street in 1895, saw the rabbits as a way of making extra cash; he was already the leading wholesaler of rabbits, chickens, and eggs. He just needed more rabbits to increase profits. He enlisted the help of young boys by offering them 8 to 15 cents to trap and deliver the rabbits.

“Dear boys,” he wrote, “the rabbit season is here again and I am ready to buy. I want your rabbits and will pay you every cent for them I can afford to pay. I have a nice present for every boy who sells me his rabbits. Bring them along and I will treat you right. Yours truly, W.S. Durham.”

In no time at all, Durham was packing his own rail cars full of iced-down rabbits and shipping them to restaurants and hotels in the Northeast. Records collected from a book Hadley published show Durham made $65,000 in 1920 alone, thanks to the sale of Chatham rabbits.

Drying off and coming back

After World War I, the rabbit rush subsided, in part due to reports of a disease called tularemia, or as the locals called it, “rabbit fever,” which humans caught while skinning rabbits. But the rabbit industry didn’t die off for another 30 years.

Former Chatham County Commissioner Tommy Emerson remembers chasing rabbits in the late 1940s with his two brothers before going to school. One morning, before the sun cast its light over the land, Emerson reached into a trap for a rabbit. An opossum bit him, and Emerson still shows off the scar on his finger.

After Emerson and his brothers trapped and gutted the rabbits, they sold them at Charlie Buckner’s country store for 25 cents each.

“He’d buy them, hang them up, and sell them to people,” Emerson says. “But if you carried them to Roy Teague’s Feedwell Cafe, a restaurant he ran on Main Street, he’d buy rabbits from people who’d bring them into town, and he always had them on the menu.”

As the story goes, Teague only bought trapped rabbits for the safety of his customers.

Emerson likes to tell the story of the man who once sold rabbits to Teague and came back with more to sell the next week. But Teague wouldn’t buy them.

“I had a customer who broke a tooth on shot from one of your rabbits,” Teague said.

“I trapped him first, but he got out, and I had to shoot him,” the man said.

While the Chatham rabbit population decreased due to excessive hunting, routine killing by predators, and changing 20th-century farming practices, Emerson says the rabbits are returning — only now they are smaller than those born decades before.

Rabbits have been hopping around his yard and farm, munching on grass, not afraid of rabbit traps or gunshot. “They are making a comeback,” Emerson says.