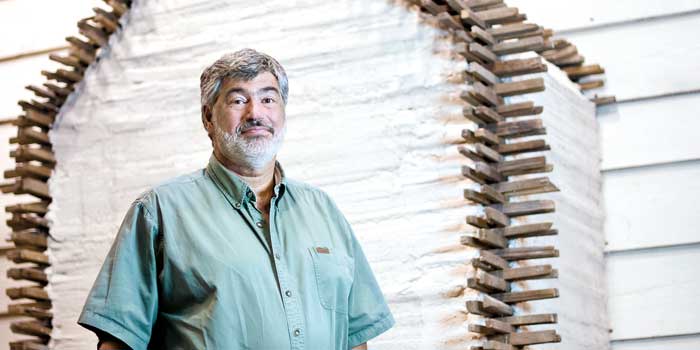 Dean Ruedrich walks into the restored Pitt County farmhouse inside the North Carolina Museum of History, proud as a puppy with a new pull toy. He touches the dent in the wall where a doorknob left its mark more than 200 years ago. He rubs the tiny holes near the windows where the father’s gun rack and the mother’s homemade drapes once hung. He even smiles admiringly at the place where many children’s dirty hands left smudge marks.

Then he steps across the museum exhibit room to the reconstructed Martin County slave cabin, once home to seven slaves who planted and harvested the crops of a white landowner. He can visualize the cots in the corners, and the pallets on the floor.

Ruedrich led the restoration of everything of historic significance from both the 18th-century farmhouse and the 19th-century slave cabin. Combining precise measurements with more than a little emotional investment, he recreated a forgotten way of life inside Raleigh’s state museum.

The two-room Robson house, from near Greenville in Pitt County, dates from 1742. Based on dendrochronology tests, it’s believed to be the third oldest, documented, surviving farm residence in the state. It was hardly recognizable when state museum leaders discovered it, in the mid-1980s, serving as the interior of a tobacco packinghouse.

“But it had so many unaltered features inside that gave it significant historic value,” Ruedrich says. “It was unusual to see a house that old that had never gone through many interior changes after all those years. The walls and floors were actually ideally preserved.”

The museum staff bought the house and stored it inside an aircraft hangar in Goldsboro. The state owned the slave cabin — one of very few to survive intact — and it, too, had been in storage for a decade. Both house and cabin were just waiting for an artisan like Ruedrich to give them a second chance.

The project required several months of on-paper planning with a team of experts, Ruedrich says, and another six months of disassembly, rebuilding, and restoration, one board and one nail at a time.

“Whenever possible, I don’t replace; I restore,” Ruedrich says. “When people walk inside the museum buildings, I don’t want them to see my hands. I want them to feel like the family just walked out.” Ruedrich never sands or paints over authentic material.

The two museum restoration projects represent a departure from Ruedrich’s previous work, although his reputation and experience — sole proprietor of Ruedrich Restorations in Louisburg for 22 years — made him the perfect choice.

“I usually work outside and alone,” he says. But on this job, “I had to get walls inside other walls and into freight elevators. There was no natural lighting. You could never see sunlight. It took a lot of junior engineering. It was a government project, and a lot of eyes were always on it. It all worked, but it didn’t happen rapidly.”

Some people think Ruedrich is a rather strange fellow, and that reaction’s understandable. Here’s a man who’ll travel halfway across the state to see a stranger’s century-old grave marker; who’ll carefully caress a decaying chunk of wood, buried in muck since before the Civil War; and who’ll talk to rusty nails and weathered window frames. Strange, unless you’re passionate about reclaiming what wasn’t considered worth saving.

Ruedrich, 51, refinished his first piece of furniture at age 12. Later, while earning a liberal arts degree at N.C. State University, he opened an antiques restoration business with his sister. He bought his first house, an 1890s fixer-upper in Raleigh, at age 20. His friends thought he was nuts. Six years later, he bought a distressed — he prefers “distressed” to “rundown” — 1820s house near Louisburg that lacked a few conveniences, like indoor plumbing. When he goes on vacation, he says, it’s to look at old houses.

“This is really all I’ve ever done,” he says. “I just try to protect the past.”

He must be pretty good at it because he has a pile of honors and awards, including the Robert Stipe Award, the highest award given for professional excellence in historic preservation in the state. Government and nonprofit organizations, as well as private individuals, line up for his services.

Among Ruedrich’s many restorations are the 1785 Andrews-Moore House in Franklin County; the 1859 Bellamy Mansion slave quarters in Wilmington; the 1747 Duke-Lawrence House in Northampton County; the 1770 Coor-Gaston House in New Bern; and the Old Beaufort Burying Grounds in Beaufort.

Ruedrich spends roughly a third of his time restoring broken or deteriorating tombstones — a particular interest of his. Among the tombstones he’s restored is the Raleigh gravestone of former President Andrew Johnson’s father. “These [gravestones] meant something to a grieving parent or child,” he says. “They’re not really my work. I’m just buffing them up for those who care.”

By the way, Ruedrich no longer lives without indoor plumbing. He modernized. He bought himself an 1850s house in Louisburg.

“I think it’s fair to judge a society,” he says, “by how it cares for what remains.” 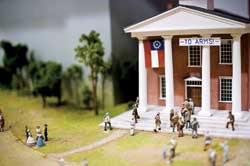 If you want to understand our state’s past, don’t miss the chance to see “The Story of North Carolina” at the N.C. Museum of History. The exhibit is a two-part, 20,000-square-foot blockbuster, using interactive exhibits and all manner of special effects to recreate the past.

The first part, which opened in April, depicts North Carolina life from the early 16th century to the 1830s. The second part, opening on November 5, begins around 1840, covers the Civil War, the two world wars, the civil rights movement, and the rise and fall of North Carolina’s manufacturing industries. A video covers the last half-century.

“Our challenges lay both in what we chose to include and what we had to leave out,” says RaeLana Poteat, the museum’s curator of political and social history.

You seldom hear museum officials use the term “permanent,” but this display is so inclusive and exhaustive — not to mention expensive — that it will remain in place for years. “We owe its durability to the taxpayers and private benefactors,” says Bill McCrea, the museum’s associate director and design chief.

Among the newly opened sections within the exhibit:

Ned Cline lives in Greensboro and is a former reporter for The Charlotte Observer and Greensboro Daily News, editor at the Greensboro News & Record, and Nieman Fellow at Harvard University. Ned’s most recent story for Our State was “Opposite’s Attract” (February 2011).