Bland Simpson is an ideal travel companion to explore and understand the complexity and diversity of North Carolina. In his new book, North Carolina: Land of Water, Land of Sky, the author and musician’s rich narrative voice — often humorous, deeply knowledgeable, and always generous — paints a rich triptych of the breadth of our state, from Down East to the “short hills and sand hills” of central North Carolina to the “jump-up country” of the Great Smoky Mountains.

Simpson devotes the first section of this wide-ranging yet deeply intimate travelogue to the pocosins, the wildlife, and the people of his boyhood home. “Water everywhere is my first lingering memory of North Carolina,” he writes: Tannin-stained water scooped up alongside a skiff. The nasal honking of migrating snow geese over Pungo and Mattamuskeet lakes. Cottonmouths curled lazily in the wet knees of cypress trees. A bright gold prothonotary warbler darting through the wetlands.

Like all fine storytellers and nature writers, Simpson does more than just wax poetic about North Carolina’s natural beauty and rich heritage of food, music, and literature. A haunting photo of men fishing on a Lumber River bridge accompanies his account of Lumbee men kidnapped by the Confederacy and forced to serve a cause they rejected and fought bitterly against. And while water may be everywhere here, clean water is in danger. Land of Water, Land of Sky is an urgent call for us to model our state’s motto, Esse Quam Videri — “to be rather than to seem.”

The book’s evocative color photographs — by Simpson’s wife and creative partner, Ann Cary Simpson; professional photographer Scott Taylor; and naturalist Tom Earnhardt — illuminate the prose that transports the reader from the Outer Banks to the Uwharrie Mountains and beyond. 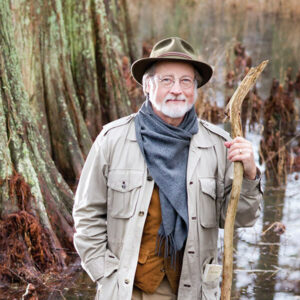 OS: What was it like to write a book about the entire state, and how did you pick what you wrote about?

Bland: When I first began thinking about this book, I put a map on the wall, cut up Post-It Notes into slivers, and got to work. This was just two or three days after Christmas, down in Beaufort, in 2014, I think. I was down there looking at Taylor’s Creek and considering what the book was going to be. I very slowly examined each county on that map and thought, “What do I know about this county?” — whether that was historical knowledge or something I had heard about that I wanted to explore. Then I transcribed those notes and ended up with 100 or so prompts — much more than what I needed for one book! One of my colleagues once said to me, “You really have a cartographic consciousness.” That has always stuck with me, especially as I think about the writing process for this book.

OS: How did you approach incorporating history in North Carolina: Land of Water, Land of Sky?

Bland: To begin my research, I talked to folks and remembered stories that I’d been told. One example: I was looking into Robeson County and found a couple of local history documents. In one of them, I came across references to the Christmastime train wreck, which happened just west of Lumberton. I learned that it involved two trains: A southbound train wrecked, and then an hour later a northbound train ran into the southbound train. It’s still the largest train wreck in the American South, and I didn’t even know anything about it! I included that in the book and did most of my research through archival newspapers because it was very well covered by the press at the time. For the book as a whole, I was looking for newsreel information — not just a single person or family’s recollection, since there are so many recollections and perspectives that are valuable.

OS: As a musician, when you think of sounds that characterize our state, what would they be?

Bland: It’s difficult to figure out, in broad strokes, how I would describe North Carolina in a lyrical way, and I considered it a huge responsibility to sort of make the claim, “this is what North Carolina sounds like” at the beginning of my book. Right now, I would say the sound of an ocean wave crashing, a fiddle sawing away, and cows lowing in the dawn. You know, Holsteins and Jerseys — all cattle — make their low, moaning moos, especially if they’re hungry. I’m remembering a moment when I was returning home at dawn, and I went on a back road that took me by a dairy farm at around 10 ’til 6 a.m. As I stopped, a dairyman — I never saw him, I just heard his voice — was singing to get the attention of his cows, and the cows were lowing as they moved towards him. It was just amazing. You know, there’s the music that humans create, and the music that’s out in the wild. Last night I was sitting outside listening to the chorus of crickets and tree frogs, diminished just slightly by the cooler weather. There’s so much music to be heard in this world.

OS: Do you have a favorite chapter or passage in the book?

Bland: Well, I don’t think I can pick a favorite, but I feel privileged that I got to write about things that I love that aren’t seen as necessarily spectacular in any way. I tried to conjure up those places that had that effect on me, and in some small part translate them through evocative writing for other folks. The things I write about don’t cost anything — it doesn’t cost but a little bit of gas money to take a ride to Linville Gorge or Uwharrie National Forest, but it still means something. I think of when I was writing nonfiction and wrote about taking my bluetick hound down to a dog show in Montgomery County and people would say, “I loved that piece because it reminded me of my dog.” Experiences like that taught me that that was something I could do as a writer — explore touchstone values that were goodhearted, and deep, through stories. That was the goal for this book from the outset: to find those places and stories and include them in a book that was celebratory.

OS: Why are North Carolina’s natural spaces so important?

Bland: I’d just like to emphasize how lucky we are, as citizens of North Carolina, that we have so many phenomenal natural areas. There’s just a great natural heritage sensibility — and it’s written into our state constitution in the last article that we the people will protect our environment, natural heritage, and land. It means that we have a very powerful responsibility to protect, preserve, and defend all of that. We can probably never do enough because the human impact is so significant, but I think we know that we need to. Saying these things is easier than making them so. But this is the purpose of these books we’ve created: If you don’t acquaint people with what they’ve already got, then they may not understand what they have — and that’s where education and communication comes in. I want people to know, “It belongs to you, my friend.”