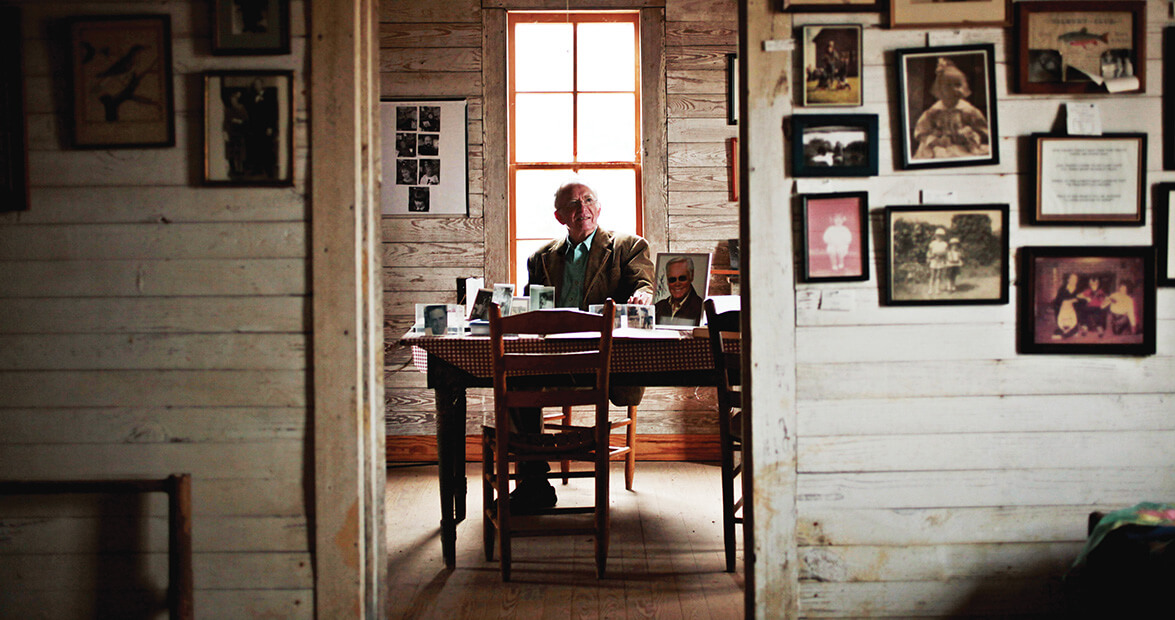 I didn’t grow up with books. There were two in the plankhouse I was born in: the Sears catalog and the Bible. I grew up with storytellers, talkers.

My father never told the same story the same way. Usually, his stories came from experiences. I can hear him now, telling how he couldn’t get his boots off after a hunt.

Uncle Walter (Daddy’s brother) has arrived, parking his pickup behind the house (my mother used to say there’s a place where grass wouldn’t grow, caused by the oil from Uncle Walter’s truck that leaked onto the grass). There he is, at the back door: “Hey–o, anybody home?” And he shuffles his feet and comes in. Daddy gets out the homemade whiskey. Toddy-time. Soon they begin to recount the hunts.

The time is always Sunday morning. We stayed home a lot, away from church. Primitive Baptists held services at a different church every fourth Sunday. Ours was Rehobeth in Elevation Township, near Coats’s Crossroads. Because there was an association of churches, the preaching would rotate among various churches in the association. And because there were so many preachers on the Stephenson side of the family, any of us could escape church without being put down or oppressed by semblances of communal morality.

I published a version of a story-poem in Plankhouse. Here is sort of how my father told the story and how I base the “poem” on his story. The voice, I hope, is mostly his, though it’s certainly an extension of my own, actually and imaginatively.

Those Lassiter boys had bootpullers. We’d go foxhunting and they’d come back, have a drink first, then take turns on that thing. I would go out to the backdoorstep and work my foot from the heel. (I got a heel long as a pinecone.) Then Maytle bought an old Singer sewing machine. It was a perfect bootpuller. I’d stick my foot between the wheel and right mount. We sold that machine for $5, really hated to see it go.

Now it’s different. I got some Ball Bands for Christmas. Thought I’d try them out. They wore good. I said, Let’s get them off, Maytle. Well, it was worse than constipation — all the straining — she got down on her knees and pulled the toe and worked the heel. I grunted. Took us forty-seven minutes by my Hamilton to get them off. I told her to take them back, I’d wear bedroom slippers and stay out of the woods.

When I started filing away what I call “mind-doodles” at age 26, I wasn’t writing like that, out of my background. I hadn’t discovered the richness of my childhood. I didn’t get to the real stuff of my life, my family’s stories and the landscape I knew so well, the fields and woods, the 35 dogs my father raced for the fox. All of that, I didn’t get to until 1973, when I was 35.

Boots, guns, dogs, chickens, mules, hogs, tobacco — the culture of southeastern North Carolina — shape my way of seeing and finding words for what finds me.

My first poem was published in the spring issue of Davidson Miscellany in 1973. It was called “Whales Are Hard to See.” I know nothing about whales. What I do know is that the subject represents for me a fascination with truth, with subtlety, with possibilities within context, hopefully, of a universal situation.

I realized (in time) that I had to write out of memory (whatever it is) and the imagination. I realized that I could never escape the past. It seems like a great dressing room in the Coastal Plain of North Carolina, including the plankhouse I was born in near McGee’s Crossroads. I see my father in his hunting coat; my father at the yearly hog killings, his hunting pants spattered with blood; boots, guns, dogs, chickens, mules, hogs, tobacco — the culture of southeastern North Carolina. Those early influences, those details of my childhood, shape my way of seeing and finding words for what finds me. My father kept his dogs out back in a dog yard. He bought dog food — fish meal and dog rations — by the ton. I can hear my mother: “Paul, you spend more money on those dogs than you do on your family.” (My parents were married for 58 years!) And the fields: They were always coming in, imposing themselves on my life. My father: “Son, go to the low grounds and pull the sheepbur weeds out of the corn.” Family and work, the past and personal history.

Along the way, the storytelling and the ever-present plankhouse I was born in, that three-room shanty, plus the hunting and fishing — formed my voices. And the animals: We had a milk cow. Pigs. And we had music. My father played clawhammer banjo. My older brother Paul played guitar. My middle brother played banjo.

And the sermons at the Primitive Baptist Church. How I write is shaped not so much by the messages of the sermons I heard, but by the music of the preachers in their pulpits, quoting in riffs from the Bible. I cannot forget the songs, either, the “hillbilly” songs, especially those of Hank Williams Sr. Of all the songs Hank wrote, “I’m So Lonesome I Could Cry” is my favorite. It’s certainly a poem.

Robert Frost had something to do with the voices I acquired, too. I saw and heard him read in UNC-Chapel Hill’s Memorial Hall in 1959. That was the first poetry reading I ever attended. And that memory settled in my life like a long-lost friend come home at last to me.

After the law and I failed each other (March 1963), I had a blind date with a woman in Washington, D.C. Her father worked for American Telephone and Telegraph Company Long Lines. I was looking for a job; he got me an interview with someone in the Right-of-Way Department, and I was hired almost immediately. My title was Right-of-Way Agent, working out of the eastern area headquarters in White Plains, New York. I traveled through seven Northeastern states, buying land and rights-of-way (easements) for microwave stations, and underground and overhead cables for the international transmission of telephone and telegraph signals. Thus the name “long lines.”

I recall driving up into the New England area north of Albany. I would keep a little pocket book of Frost’s poems on the car seat. I memorized many of them. Looking out at the birches or at the walls of boulders, I realized that he saw what he wrote about. And what I saw in his poems and heard in my head I translated, as I saw outside my window the context for his imagination and my own. I took Frost personally. He was not just a poet I read in a book. His poems were as real as life — my life! I could hear his voice in “The Road Not Taken,” “Birches,” and “Stopping by Woods on a Snowy Evening.”

One more thing: I always heard my father say that there were slaves buried across the road from where I’m typing these words at 985 Sanders Road in Benson. They lie in unmarked graves in the Nimrod-Stephenson Memorial Cemetery, an old field graveyard where my great-great-grandpap George is buried. He died in 1886.

I knew I had to write about this girl. I wrote more than 50 drafts, trying to find the right voice or voices. I cited snippets of documents, especially around the time of her sale (1851) and forward to 1865, when the slaves were freed into the invisible freedom of Reconstruction.

I tried to write myself out of the story, out of the long poem, if it is a poem. I called the manuscript Family Matters: Homage to July, the Slave Girl. The poet Allen Grossman chose it to be considered for the 2008 Bellday Prize, which it won. He wrote a comment for the back of the book. The part I like most is this: “Family Matters is a strenuous questioning — and exposure — of the fictions of ownership, whether of persons or places, graves or farms.”

More and more I am drawn to the color line, to that past which identifies our history in North Carolina and the South, and, probably, all over the world. And I still hear my father’s voice, my mother’s, too, in her kitchen on our little farm, talking through the screen to the black tenants whom she fed on the porch, telling them that she’s glad that they like the fatback and the peas she cooked.

I never feel quite comfortable with this place in southeastern North Carolina, where I was born at home in western Johnston County. It’s like an itch I have to scratch. Maybe what I feel is a calling. I want to create something that anyone, anywhere, might participate in. I didn’t know what I was doing at the time, when I started. I still don’t. Perhaps I’m documenting and recreating a made-up place based on the actual locale, McGee’s Crossroads.

In Fiddledeedee, for example, a long, autobiographical, lyric narrative I started around 1985, the speaker (who is based on me) is trying to find an image for the world. Home is the main theme, I suppose. In March 1996, my wife and I returned home, to this place, near Benson, in the Coastal Plain of North Carolina, where I was born and lived in the plankhouse that we have restored.

And I keep hearing those voices way back there, as they lead me on to the page, the words leading the way, trying to find me.