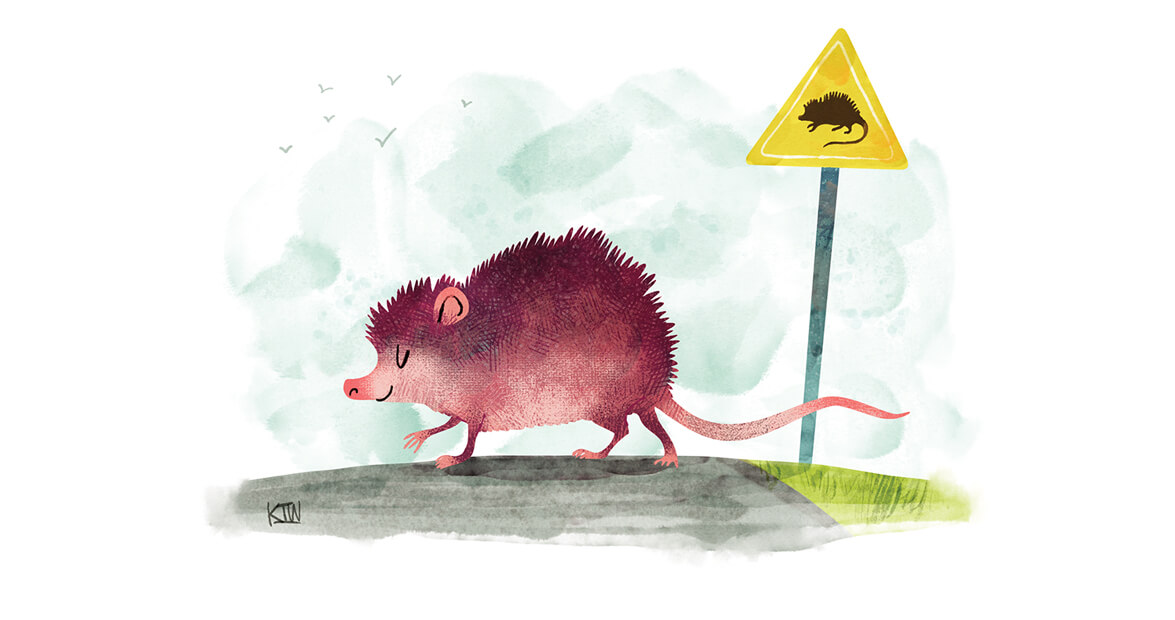 If it were illegal to run over an official state symbol, lots of North Carolinians would end up in the hoosegow after unhappy highway encounters with possums.

Yes, the possum is a North Carolina state symbol, and has been since 2013, when the legislature named it the state marsupial. No disrespect to possums (or legislators), but that’s not saying much — the possum is the only marsupial found in the state (and, for that matter, in all of North America). With no competition from adorable kangaroos or wombats, the possum climbed out of its ditch of obscurity and wandered onto the esteemed list of state symbols. The lawmakers didn’t even quibble over the critter’s scientific name, Didelphis virginiana. (Our state marsupial is a Virginian!)

And it’s opossum, with an O. There’s also a possum — just plain possum — but it lives in Australia and New Guinea, and it resembles a cute koala. Some say our possum looks like a giant rat, found not on the other side of the globe but right in your yard, suspiciously close to the chicken pen. The (o)possum name comes from the Powhatan Indian word aposoum, which might mean “walks into traffic.” We leave the O off our possum, because saying it sounds highfalutin. Or Irish.

North Carolinians are divided over that “giant rat” description. On one side, several million people see possums as irredeemably unappealing; on the other, six or eight folks think they’re beautiful, or vaguely handsome, or at least have potential.

It seems every county in North Carolina has one citizen nicknamed Possum. In my home county, Sampson, that person is among my kin: one Possum Bass, a hardworking roofer and carpenter whom I see at family reunions. I’m not sure what it takes to earn the nickname Possum. Looks might do it, but my cousin Possum bears no resemblance to an actual possum. (I can’t say the same for some of my other relatives.) Being male is a qualification — I’ve never met a woman named Possum, though I won’t swear she isn’t out there. For sure, when someone starts getting called Possum, it sticks. I don’t know Possum Bass’s real first name, or if he even has one.

It’s not clear why legislators figured we needed a state marsupial. Maybe some of them also have a cousin named Possum. Or perhaps they caved to pressure from the powerful possum lobby, a nocturnal passel of slow-footed, thin-faced characters in gray suits.

Possibly, the honor involved two traits that say a lot about the possum: “unspecialized biology” and “narrow braincase.” In other words, it’s an ordinary dummy. At last, the state has a symbol that represents me: a gray, rotund critter that’s none too bright and bumbles into the wrong places at the wrong times. Like me, the possum is not an industrious animal — given a choice between mowing grass or cleaning gutters, it crawls under the house for a nap. And we both have opposable thumbs.

Unlike symbols of intricate beauty or exceptional value, the possum represents the unremarkable majority massed in the middle: thick, ubiquitous, slow, and aimless. If the cardinal and the pine tree are the esteemed grandparents of our state symbols, the possum is the wayward uncle who shows up at night to mooch food and rile up the dogs.

Consider the possum’s attributes: It’s unlikely to carry rabies (again, like me), and once it grows up, it gets too heavy to hang from trees by its tail (ditto here). What it lacks in eyesight it compensates for with keen smelling ability, and its 50 teeth make it a model for dental health. When irritated, it tends to grumble rather than bite. When threatened, it literally plays possum, faking death to avoid real death.

That makes the possum an excellent North Carolina symbol. It stands for the shy, peaceful characters among us who weren’t blessed with the good looks of the raccoon, the grace of the deer, or the agility of the squirrel. While nobody has everything, plenty of people don’t have much. As we cross the human highway, life doesn’t step on the brakes for us, and often our only option is to inch forward and hope for the best. Like the possum, we’re all out there in the dark, just trying to get to the other side.