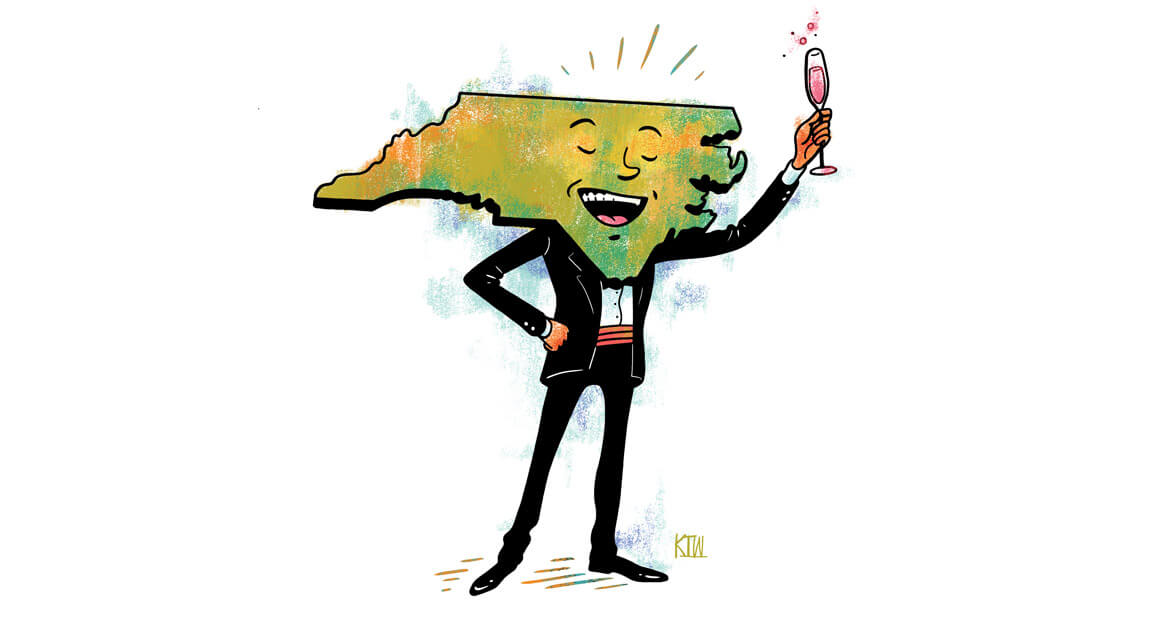 Do you know what people don’t do often enough? People don’t rise and give a toast. When cheerfully drinking together, one ought, on occasion, to rise and share a thought — a word, a melody, a verse. Honor one who is present, or one whose presence is missed. That is, one ought, while sharing a drink, to have something to say. And we seem to have lost track of the importance of this skill.

Yes, there are weddings and retirement parties, where uncomfortable people make stilted comments, and people are always thoughtlessly clinking their unexamined cheers and skoals and l’chaims. But overall, true toasting is a dying — even dead — art.

Dying, I should say, in 49 of the 50 states. Because alone among states, North Carolina has a state toast. State songs abound, of course, along with mottoes, to say nothing of the flowers, birds, minerals, and bugs that demonstrate the marvelous fecundity of the state-symbol ecosystem. But state toasts? Exactly one: ours.

I know this because I once had a detailed literary fantasy involving the North Carolina state toast. Here’s how it was supposed to go.

One of our senators — or governors, or members of Congress — gets elected president or vice president or something equally impressive. The point isn’t who or when, the point is that some North Carolinian is the Big Deal and is paying attention to North Carolina and its writers. Like me! Then perhaps one of my books becomes a best seller or I receive some noteworthy award or something. Or maybe the Important One just likes Carolina writers and wants to help them out. Anyhow, I earn attention, which yields the obligatory invitation to a fancy White House dinner. So there I am, at that gigantic table with the tablecloth and the candelabra and all the forks, and that president asks me to say a few words. I stand up in my sleek, shawl-collar tuxedo, the bow tie having been fastened not by some machine but by my own hand, and I raise a glass. With a glint in my eye, I say:

“Here’s to the land of the longleaf pine,
The summer land, where the sun doth shine,
Where the weak grow strong and the strong grow great …”

At this point, the Carolina-born Big Deal, gazing at me with what looks like wonder, stands and joins me, raising his or her own glass as together we intone, “Here’s to ‘Down Home,’ the Old North State!”

Such cheering! Enchanted guests fete me for the remainder of the evening, and whether the Order of the Long Leaf Pine precedes or follows this moment, that honor is eventually mine. Members of the Order do not have to wait to be asked to say a few words. They receive, as the certificate accompanying the award states, “the special privilege to propose the following North Carolina toast in select company anywhere in the free world,” that toast being, of course, the one the Big Deal and I in fantasy rapturously recite. And, mind you, I would not wait for select company. I would propose the toast promiscuously — at ball games and in bars, on back porches and at bachelor parties. Neither would I limit myself to the free world. I believe toasts can lead to democracy and would be prepared to prove it.

OK, obviously: How many different ways has that particular fantasy failed to come true? For one thing, no current North Carolinian appears likely to get anywhere near the White House. And let’s not even address the disappointing arc of my literary career — though at the very least we can agree that it has left me one longleaf pine short of an order.

But forget all that: Only in North Carolina could I even have that particular — absurdly detailed — fantasy. Because North Carolina remains the only state in the union to have an official state toast.

In truth, the toast, adopted in 1957, is a song, by Leonora Martin and Mary Burke Kerr. The song is in turn confusingly called “A Toast.” Written in 1904, the thing was first spoken publicly that year at a meeting in Richmond, Virginia, of the North Carolina Society. Take that, Mountain of Conceit to our north!

Actually the legislature seems to have intended to adopt the “song” (I can find no mention of it ever being sung and have no record of a tune, if one existed) as the state toast to make up for having failed to adopt it as the state’s official song. That honor the legislature had in 1927 bestowed on “The Old North State.”

So, the legislature calls it a song, the authors called it “A Toast,” I call it awesome. It goes on for three more verses, rhapsodizing about cotton blooms, Mount Mitchell, galax, rhododendrons, and the obligatory “maidens … fair.” In short, the usual. Don’t get me wrong, I married one of the maidens fair, so I’m not complaining. I’m just saying that after that stirring first verse, in subsequently simply listing our assets the toast cannot fail to lose something.

But only a bit. Anybody who’s ever watched a best man stumble through four minutes of cringe-inducing wedding-feast encomium knows that with toasts, brevity, as another man never honored by the Order of the Long Leaf Pine once suggested, is the soul of wit. And that first brief verse, the only verse usually recited, is as good as a toast can get: It sings our praises without arrogance, professing love of, in essence, the soil here, which at its best surely does seem to nurture strength and fineness.

In fact, the decision to embrace the toast is itself testament to a kind of reasonable statewide system of priorities, from which the state occasionally veers but to which it usually seems to return. In my fantasy, I imagined delivering the toast before a president — but I could just as happily deliver it at a local bar. A toast serves many purposes, but one thing is for sure: If you’re toasting, you’ve got a glass in your hand. And I’m for having a glass in your hand, whether a flute of champagne at a country club wedding or a mason jar of the kind of whiskey Junior Johnson used to distill. Say what you like about the Old North State, it values having a drink in your hand. What’s more, it values — alone among the states — having something to say when you’ve got a drink in your hand. Those are some values right there.

That among its hallowed symbols North Carolina enshrines ready eloquence while drinking, to me only underscores our native good sense. “A vale of humility between two mountains of conceit,” Zebulon Vance or Alexander Hamilton or maybe somebody else supposedly once called North Carolina. Between two states insufferably focused on their gentry sits this hilly mecca of families and farms, this range of mountains and meadows and dunes, of small businesses and small bars. A nice place to grow a plant, a pig, a family. To take a walk in some downtown, hear music, turn a corner.

Hey, a bar! That looks like a nice place to have a drink. Oh — a toast! A toast!

Will everyone please rise?