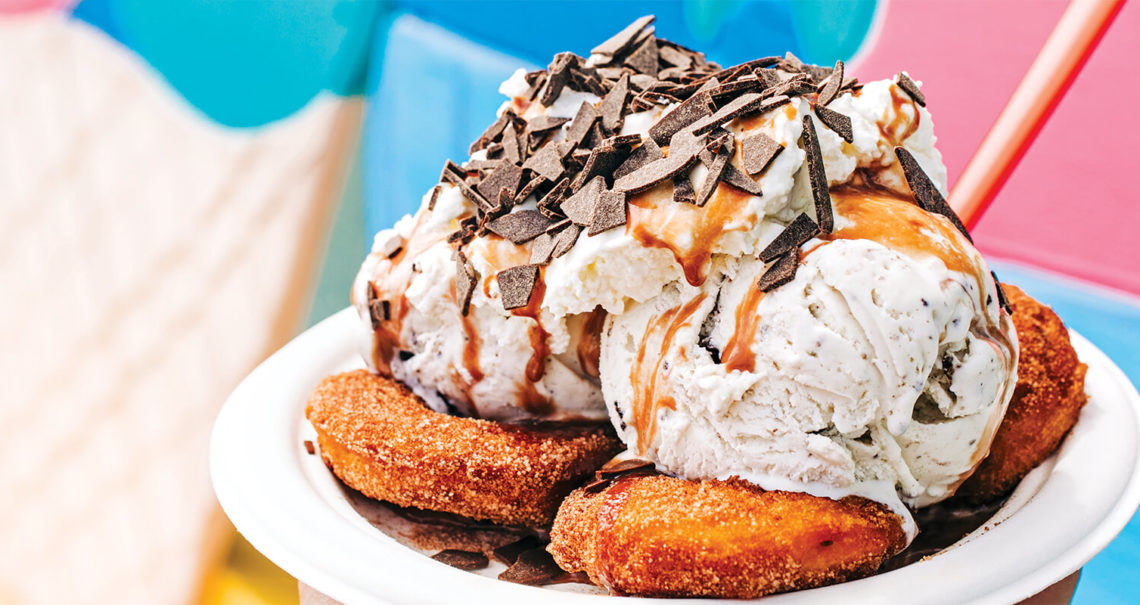 In a seaside town in Ireland, some 3,500 miles from Carolina Beach, Jeff Hogan tasted the best ice cream he’d ever had. It was creamy and dense — with more butterfat and less air than the ice cream he was used to. He spent the next several years trying to convince the shop owner, Joanna McCarthy, to let him bring her recipe to the United States. She refused at first, but during his frequent visits to Ireland, their families grew close, and finally, McCarthy told him: “There’s not a family I’d rather be in business with than yours.”

Hogan spent weeks with McCarthy on both sides of the Atlantic, learning her recipes. Together, they traveled 800 miles around North and South Carolina, looking for the best ingredients. The translation wasn’t exact: In the U.S., for example, we don’t have Kinder Bueno, a European chocolate bar with a hazelnut filling. So the pair substituted Heath Bar, and McCarthy’s popular Kinder Bueno flavor became Heavenly Heath instead. And Hogan knew that for a North Carolina audience, they had to come up with recipes for butter pecan, birthday cake, and banana pudding — flavors you won’t find in Ireland.

Celtic Creamery opened in May of 2018, but at the end of that summer season, Hurricane Florence blew through and peeled off the shop’s roof. Hogan spent the next seven months rebuilding, and in April 2019, Celtic Creamery reopened, once again serving a taste of Ireland on Carolina shores. — Katie Saintsing 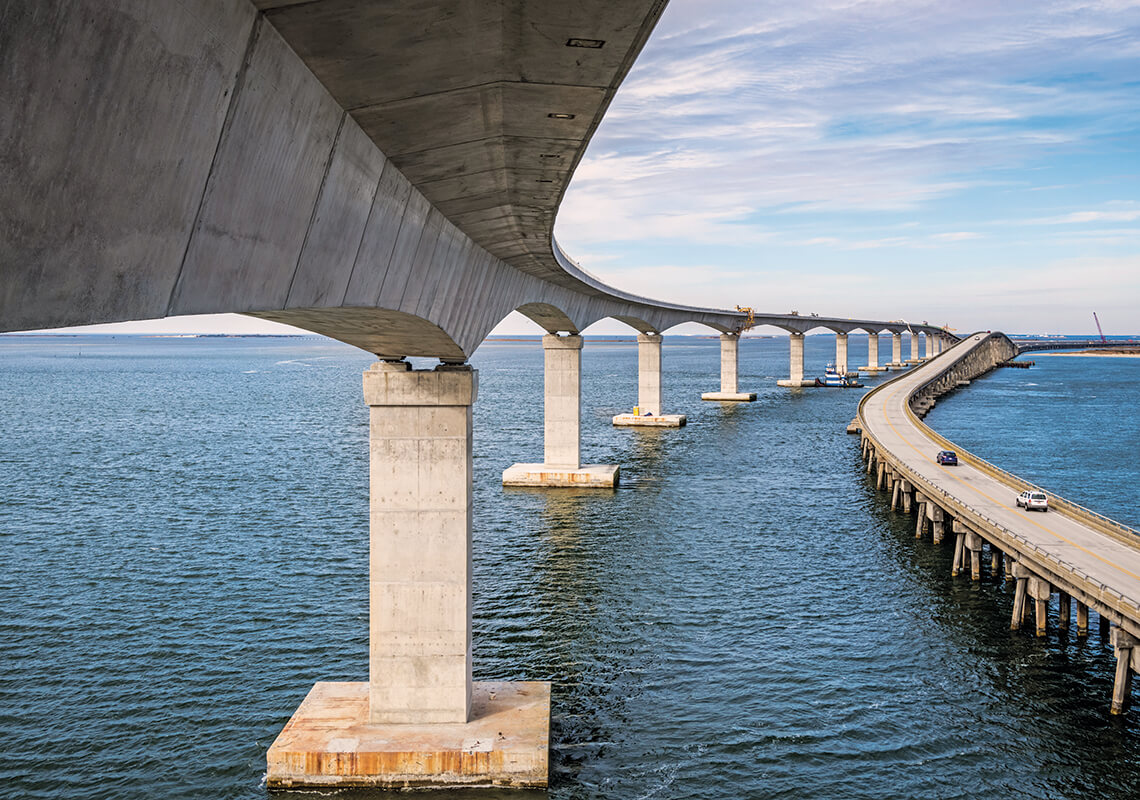 The old Herbert C. Bonner Bridge that connected the northern Outer Banks to Hatteras Island was supposed to last 30 years. It stuck around for 56. Toward the end of its life, lanes were regularly closed for construction. Traffic often backed up. In December 2013, the bridge was shut down for nearly two weeks because inspectors discovered that too much sand had washed away from around the pilings. On a scale of 1 to 100, the North Carolina Department of Transportation once rated the bridge’s condition a 2.

There were a lot of options on the table to replace it, including a 17-mile bridge that would bypass Pea Island and connect directly to Rodanthe. Another idea? No bridge. Just ferries to reach Avon, Buxton, Hatteras Village, and so on. Ultimately, the state built a new bridge right next to the old one — a taller, sleeker structure meant to carry some 2.5 million annual visitors to and from Hatteras Island.

In February 2019, the new Marc Basnight Bridge finally opened. The 90-foot-tall bridge sits on pilings driven 140 feet into the seabed, allowing the sand to do more of what it does naturally. It’s a structural marvel, designed to withstand hurricanes and last 100 years, and it’s won architectural design awards. To Beth Midgett, a real estate agent in Hatteras Village, the new bridge seems magical, like a portal to another world. “It’s where you leave the real world behind and go to [this] world where we all live.” — Jeremy Markovich 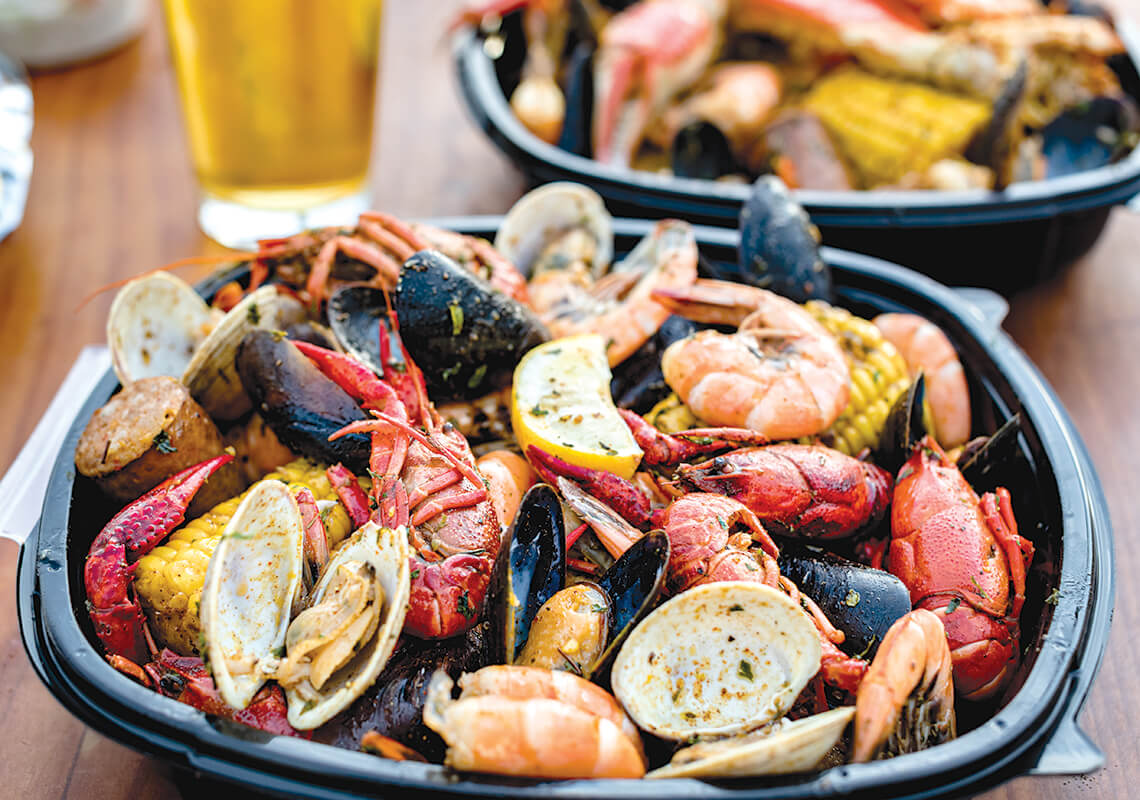 Boro Low Country Kitchen occupies prime waterfront space in this small fishing town that serves as a gateway to the Crystal Coast. About 150 yards from the restaurant’s dock is the cachunk-cachunk of beach traffic driving over the bridge to Cedar Point. Boro’s walk-up window slides open like a fast-food drive-through. But don’t expect a burger and fries: This joint’s specialty is seafood boiled with corn, sausage, and potatoes in a secret concoction of spices — no Old Bay allowed — and served steaming hot on aluminum platters.

“The Low Country boil was a real Hail Mary,” says Randy Swanson, who opened the restaurant in 2019. “It wasn’t really being done around here. Fortunately, it’s really taken off.”

Standing at the window near an old statue of a jolly pirate, you’ll order from a folded paper menu: Should you get lobster, snow crab, shrimp, and mussels? Or maybe blue crab and clams? Whatever you decide, a cold beer will likely come in handy. Then, take your tray and beer back to one of the long, high-top tables on the deck, grab a shell cracker, and savor the taste of the sea. — Cate Doty 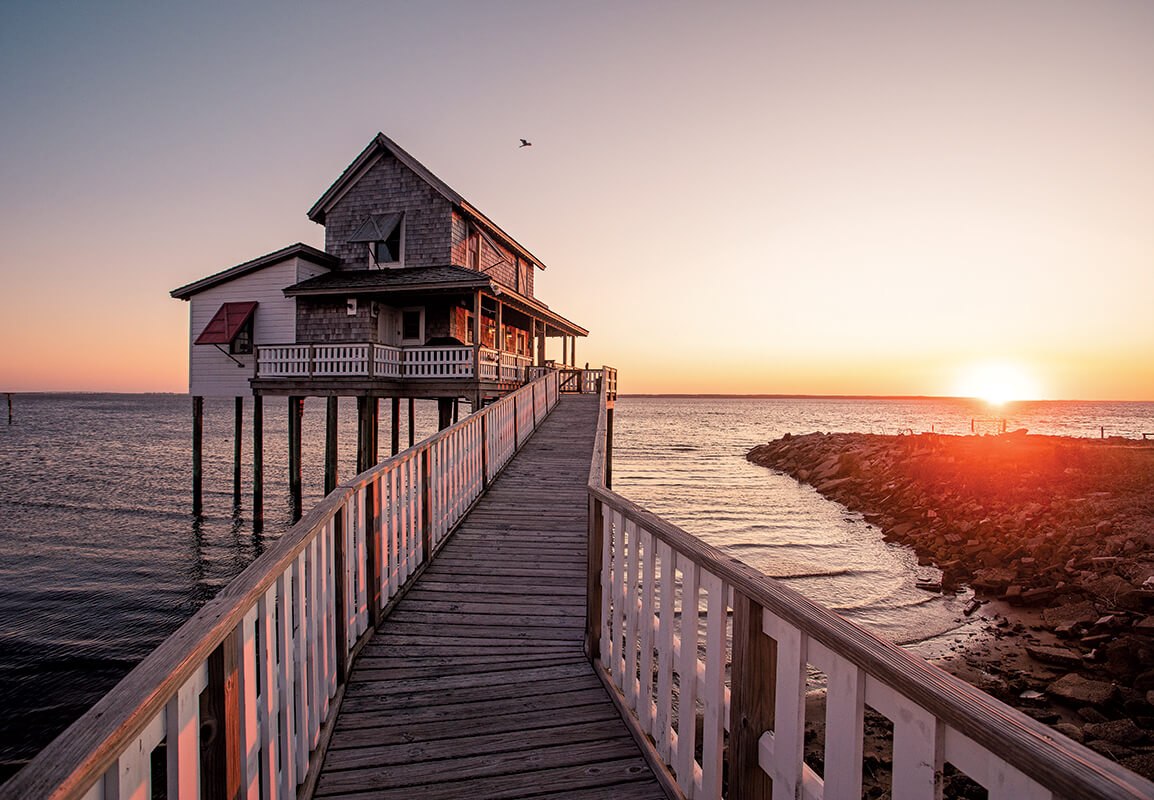 As a musician and an artist, Billy Stinson sold CDs featuring his own songs as well as paintings and prints of his beloved cottage to raise the money needed to rebuild it. photograph by Chris Hannant

Billy Stinson was devastated when, in 2011, Hurricane Irene swallowed up the beloved early-1900s cottage in Nags Head that his family had owned for nearly half a century. Stinson’s Ranch was a beauty: Perched on pilings surrounded by the sloshing waters of Roanoke Sound and attached to the shoreline by a 55-foot-long pier, it had dramatic views of sound and sky, of seagulls and sailboats, and a canvas of stars at night. The inside was cozy and eclectic, a reflection of the retired Greenville art teacher’s creative spirit. On summer evenings, Billy, his wife, Sandra, and their two daughters would play acoustic guitars and sing or create art together against the backdrop of warm, brown beadboard walls and ceilings. “It had a personality,” Billy lamented to a local news site after Irene destroyed the place. “It sure did.”

Then, a miracle happened. A neighbor who owned a construction company and friends from Greenville and the Outer Banks banded together to help raise money to rebuild the iconic cottage, which is available as a rental. Construction was completed in 2013. Now secured with salt-resistant stainless steel beams and brackets and sitting higher above the water than before, the new Stinson Ranch is a nearly exact replica of the old one, its creative spirit reborn. — Mark Kemp 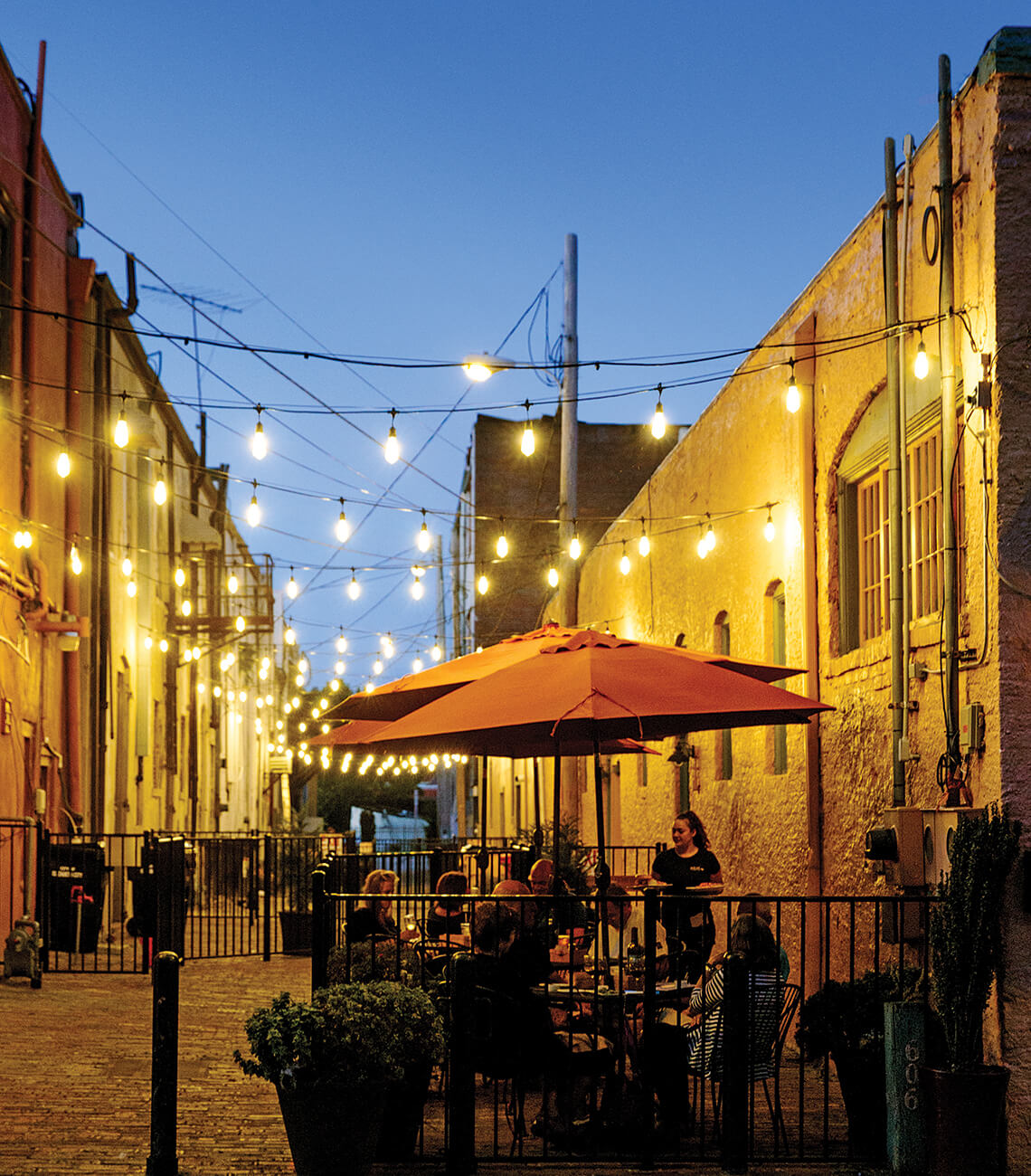 Just a few years ago, Pailin’s Alley was filled with junk and weeds. Today, it’s become the epicenter of downtown social life. photograph by Anagram Photo

A block from the Pasquotank River, alfresco diners in Pailin’s Alley linger over fried green tomatoes and reconnect over Daydreamer blonde ale. The scene is a far cry from how it looked a few years ago. When Jim Nye opened Hoppin’ Johnz on the corner of Pailin’s Alley and Colonial Avenue in 2016, the area was overgrown and neglected. He and his partner, Rose, cleaned it up and carved out a place for bistro-style seating. “When we opened Hoppin’ Johnz, the available alley space cried out for plants,” Rose says. The next year, Thomas and Tabitha Reese opened Ghost Harbor Brewing Company in a former stable and livery. And then, in 2018, lifelong Elizabeth City residents Janne and Scott Mills and their son, Michael, opened The Mills Downtown Bistro. “When I was growing up, it was exciting to come downtown, and then it just died,” Janne says. “But now, I stand here and I see it coming back. It just makes me so happy.” — Ryan Stancil 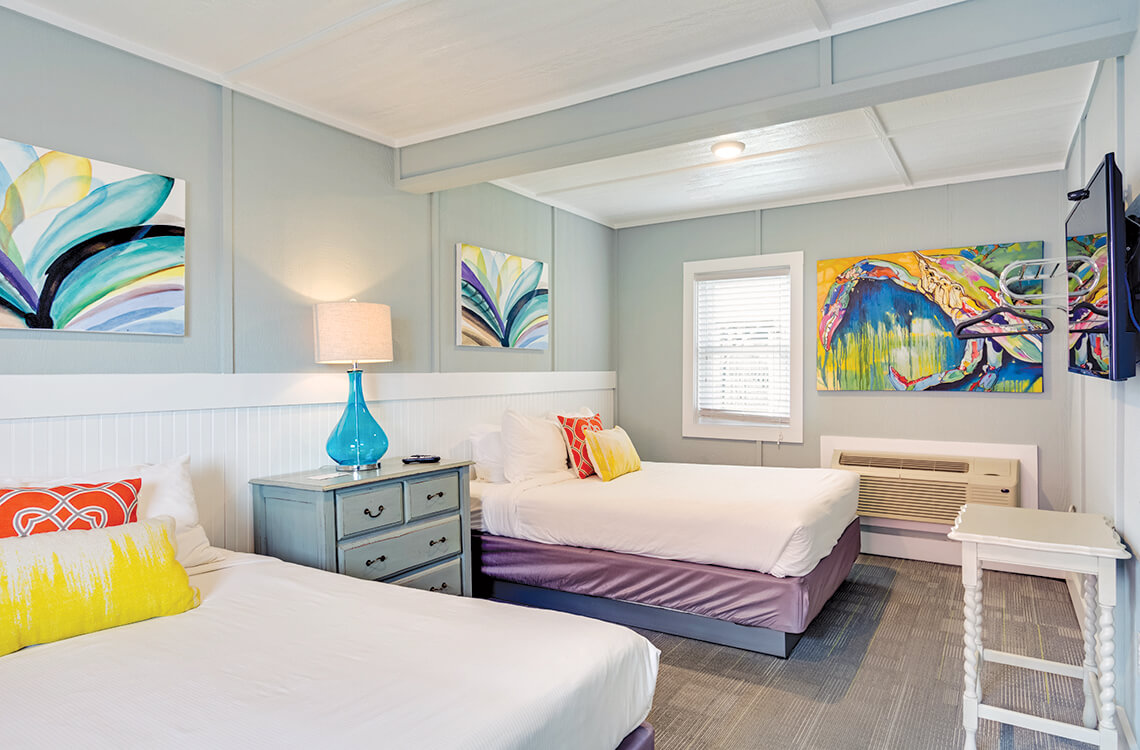 The See Sea Motel aims to replicate the simple pleasures of days gone by with its nostalgic spirit. photograph by Beach Retreats/Village Realty Holdings

On a whim in the late 1970s, Laura Baker’s parents loaded up their three children for a vacation in Kill Devil Hills with no plans or reservations. The only hotel with a vacancy: the See Sea Motel. The family returned every August for 16 consecutive summers. “It was a childhood dream,” Baker says. “I learned to swim in the pool at the See Sea. We stayed in the water until dark.”

Almost two decades before, and seven miles south, George Corey had scraped together every extra cent he had to buy the Star Motel in 1961, renaming it The Tar Heel Motel. “A lot of people would meet at the motel, and by the end of their trip, they would plan their family vacations for the same time the next year to be together,” says Mary Anne Corey Crowe, Corey’s daughter.

A lot has changed on the Outer Banks since then. “Part of that evolution has been less and less of the old-school, mom-and-pop motel properties,” Scott Midgette says. Born and raised on the Outer Banks, Midgette has done his part to slow the decline. In 2018, he and several partners bought The Tar Heel and See Sea motels. “I loved the properties and knew we could do something with them.”

“We had people interested in [The Tar Heel], but they wanted it torn down,” Crowe says. “It’s been part of our family for so long, and we just didn’t want that.”

Midgette, who owns a local construction company, gave both motels a facelift that brought the rooms, furnishings, and exteriors into the 21st century while preserving their nostalgic spirit. “They just needed some love and a little updating,” Midgette says. “I want guests to be able to come and enjoy days gone by. I want to preserve these places for future generations.” — Ryan Stancil