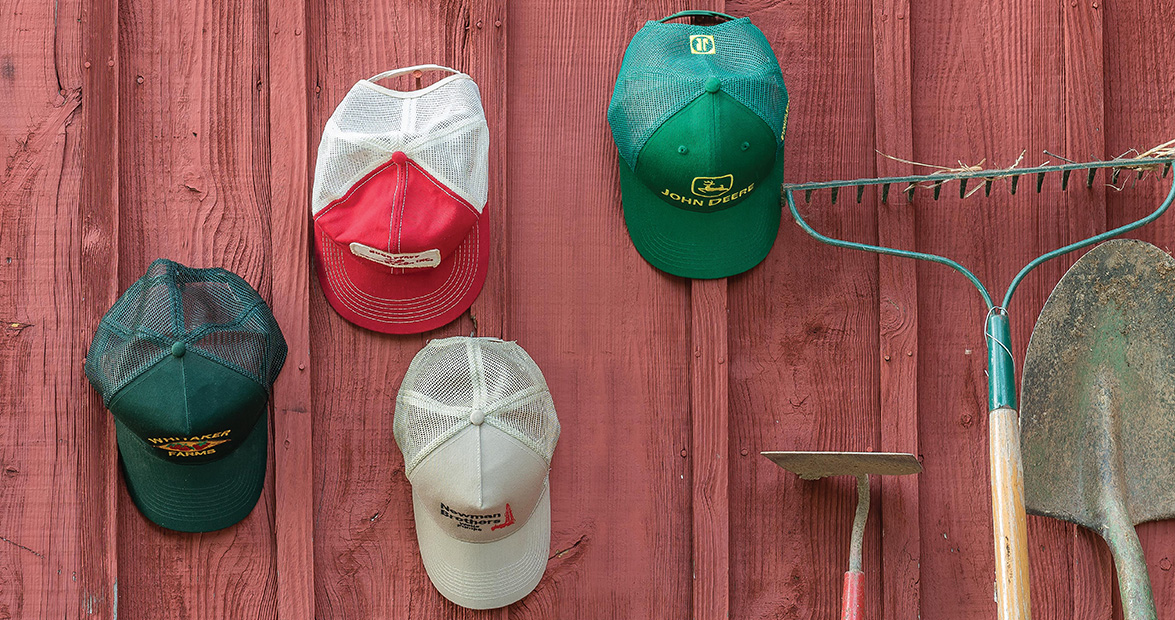 He stands between the racks of Nabs and beef jerky in the Big Blue Store, a farm equipment and hardware outlet in Clinton. He’s wearing Dickies coveralls and a John Deere cap, the kind with plastic mesh and a snap-fit band in back.

A toothpick juts from the corner of his mouth. His countenance says he’s a no-frills, get-’er-done sort of fellow. If he thinks it bizarre that a stranger is inquiring about his choice in hats, he gives no indication. Sherwood Padgette, a good, gallant-sounding name, is here on break from logging timber, a good, manly job. “I like to wear this cap year-round because it lets my head get plenty of air,” he says.

With its curved bill and button on top, it looks like a baseball cap. But unlike the classic baseball cap, it has plastic mesh on the back (as opposed to cloth) and a company logo on a tall, stiff, foam front. Some might call it a trucker hat, though that moniker seems to have lost its currency — if it ever had currency at all — among those who wear it as practical, everyday attire. When a man wears a cap like this, Padgette says, “most know it’s a no-nonsense man. He’s all about work and business. People in my circle of friends are that way.”

His fingers are thick and leathery, with deep creases. A workingman’s fingers. He’s 69 years old, and, with a million dollars in John Deere equipment back in those pine flats and swamps, he has no plans to hang up his hat anytime soon. “That’s the reason I like this hat,” he says. “Most people who wear these type hats, they’re men on the move.”

In the mid-’80s, I didn’t know them as trucker hats. They were just … hats. Simple, made-for-getting-sweaty hats. NASCAR fastman Bill Elliott wore one in the winner’s circle. Cooter wore one on The Dukes of Hazzard. Mechanics, truckers, farmers, plumbers, loggers, spectators at tractor pulls, and old men in hardware stores wore them.

Above all, my uncle Bill wore them.

Every Southern boy should have an Uncle Bill, my exemplar of the rural, self-made Southerner, a man who drove a Silverado, worked in the woods, spoke little, and fished a lot. So when my cousin gave me a couple of hats with the logo of my uncle’s employer — “Florence Timber Company, Pines and Hardwoods” — it greatly bolstered my country-boy street cred.

A neighbor, Tommy Baker, wears a cap emblazoned with NCDOT, a nod to his years of working in equipment maintenance for the transportation department. He’s further proof that if you own one cap, chances are you own lots of caps — “Shucks, 20 or 25 at least,” he says — nearly all of them free. “I don’t buy hats,” he says. “Everybody’s always given me hats.”

The caps earned the name “trucker hats” because rural businesses such as feed stores often gave them away as promotional items to truckers and farmers and the like. Their prominent fronts were tailor-made for displaying logos. Cheap to produce, they also became known as “feed hats” or “gimme hats.”

The Carhartt and Under Armour caps at Big Blue don’t fit the conventional definition of a trucker hat. They’re fashioned with cotton fabric all the way around rather than the mesh-in-back pattern. Have trucker hats gone the way of the CB radio?

But Lewis McDougald appears to reinforce the image of the trucker hat as an essential piece of the workingman’s wardrobe. He’s wearing one with white mesh and a dark blue front. He used to load tractor-trailer trucks with live turkeys for a living, and now he participates in competition barbecue. “If he’s wearing one that’s vented,” McDougald says of any man in a mesh hat, “you know he’s working because he’s sweating.”

As much as these hats appeal to the workingman, they’re also popular accessories for folks who like to play hard and party hard, evoking that old Hank Williams Jr. song about the pig in the ground and beer on ice and rowdy friends comin’ over. Maybe this scene explains why so many caps are emblazoned “REBEL” and “SOUTHERN BY THE GRACE OF GOD.”

A decade or so ago, the hats actually became a fashion statement among the young, beautiful, and city-slicked. The image of Britney Spears crowned with those rugged peaks of foam and mesh is about as natural as the idea of a John Deere repairman in skinny jeans.

Even The New York Times tipped its hat to the trend in 2003, quoting a young man from Greenville — yes, our Greenville — who expressed annoyance at the hipsters who’d co-opted these caps. He thought young urbanites were mocking the authentic working folks he knew back home in tobacco country. The Times pronounced the trucker hat as “a ubiquitous accessory for slumming 20-somethings who favor sideburns, [and] drink canned beer.”

Slumming 20-somethings? What would the Sherwood Padgettes and Uncle Bills of the world make of that appraisal?

When seeking a setting for a story on so-called trucker hats, Sampson County is a natural go-to: thoroughly rural, with a whole lotta hog farms, turkey farms, tobacco farms, deep swamps, and Piggly Wigglys. I muster as much manliness as I can in a hybrid car, sing along to that anthem of the American trucker, Alabama’s “Roll On (Eighteen Wheeler),” and waggle an index finger-wave to passing rigs.

Tomorrow, I’ll put on a tie and drive to a cubicle. It’s a good job, but it’s not a workingman’s work — and wearing caps is frowned upon. Out here, among the smell of manure and the roar of International Harvesters, the simple ball cap, with its complete lack of chic, will never go out of style.

Men who shop at the Big Blue Store aren’t subject to the back and forth of the fashion-forward set. For them, ball caps, trucker hats — whatever one desires to call them — transcend all trends. They’re cheap, comfortable, and made for people working too hard or playing too hard to obsess over image. Trucker hats were never meant for late-night bar-hopping in high-end districts; they were meant to be worn while working on a Hustler twin-dual lawn mower, like John Hale does.

As the shop manager at Big Blue, he’s wearing a cap advertising Yeti coolers, and a light blue button-down with a patch over his pocket that says “John.” His fingers, too, are thick. A taciturn fellow of 54, Hale’s answers to questions are much like his hat: simply crafted.

“I just like the way they wear,” he says.

To which one naturally asks: How do they wear? To which he chuckles and says, quite simply, “Good.”