Justin Miller brought his kids out to walk around the old Occoneechee Speedway because they’ve been cooped up in the house. Now, he’s trying to re-coop them into his Honda Odyssey. After they shed their muddy boots, 6-year-old Grant and his 4-year-old sister, Josalyn, try to describe the experience.

Their dad looks up for a second. “They like looking at the old cars,” he says.

Grant and Josalyn disagree on what, exactly, they’ve been hiking on.

“Racetrack,” Josalyn says, “because cars used to race on it.”

This is the Millers’ third trip here from Durham, and every time they come, they’ve walked a lap. The part that used to be the track is about a mile long. The Millers timed themselves, and today their lap took 28 minutes to complete. The cars that used to race here could turn a lap in about 40 seconds. Put another way, racers could hit speeds of up to 90 miles per hour on the dirt. The Miller family tops out at two. 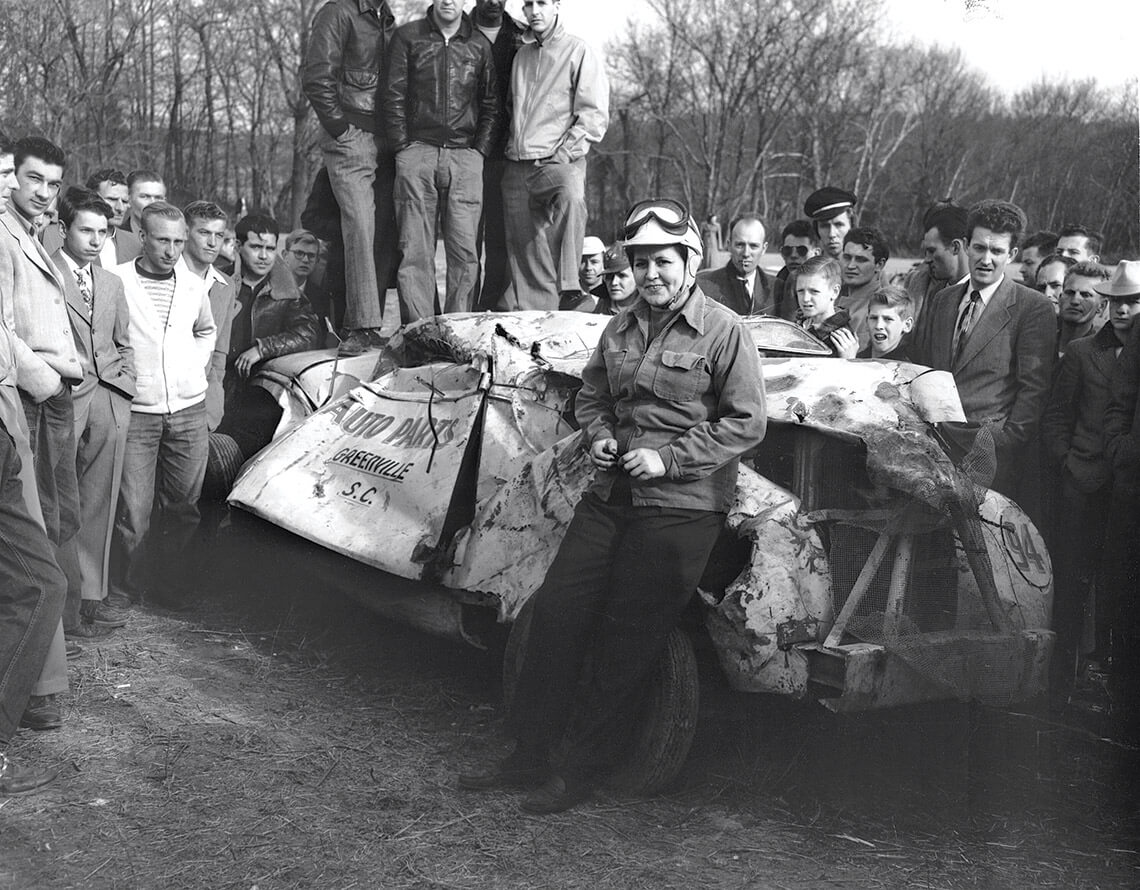 Early female racer Louise Smith posed in front of her crumpled car after one of her many dramatic crashes at Occoneechee. photograph by RacingOne/ISC Archives/Getty Images

Now, compare their trip around the track to a trip that Louise Smith took here 71 years ago. Smith, later the inspiration for a character in the movie Cars 3, was one of the first women to drive in NASCAR’s top circuit. She could drink, swear, and fight just as well as the men. Smith would become more famous — and irresistible to promoters — because of her spectacular, rolling wrecks. She once quipped that she would have been a much better driver if she’d put wheels on the roof of her car.

Smith’s most memorable crash came at Occoneechee in 1950. Curtis Turner, a hall-of-fame driver, had just taught her how to powerslide through turns. Smith thought she’d gotten the hang of it, but during qualifying, she slid a little too far. “Man, when I hit that second turn, that tire blew, and that thang never did straighten up,” she later said. “It sailed off that bank down toward that river like a cannonball. Hit three trees. They had to get me out with a torch.” Some racers thought she was dead. Somehow, she and her car stopped before tumbling into the Eno. 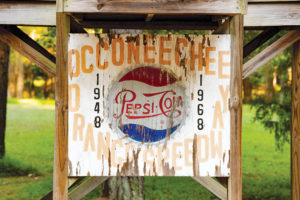 Yes, it is hard to square these two stories about the same place: one of a family gently treading across a quiet, serene spot; the other of a hard-charging woman who turned her car into an airborne mass of scrap metal for a crowd of rabid race fans. At Occoneechee, past and present don’t so much collide as they sort of intermingle. Sometimes, a few old cars return for a parade, but nobody’s turning laps here at any significant speed. Sure, there are overt nods to history at the speedway. The old buildings are authentic. The flag stand and rusty race cars were added to provide a little racetrack feng shui. But the sight lines have long since vanished. Pine, poplar, and beech trees have taken over.

This strange visual — a forest racetrack — also conceals the real history of Occoneechee. What now feels secluded and remote was once a rowdy and reckless place. So what happened? How did a family-friendly nature trail evolve from what we’d now think of as a decidedly not-so-family-friendly speedway? How did the roar of engines and the odor of leaded gasoline become such a distant memory? And why did this track, which was around for the birth of NASCAR, close for good right as NASCAR started to get big?

There’s a fairly simple answer to all of those questions: Everybody grew up and moved on.

In 1957, the Rev. Charles Reckard of Hillsborough Presbyterian Church made what he thought would be two lasting changes. The first was the construction of a new fellowship hall off of the sanctuary on West Tryon Street downtown. The annex was named for a church elder. Strudwick Hall held potluck dinners and Bible studies. It continues to be in use today.

Reckard also worked with fellow pastors to ban racing on the Sabbath so his community didn’t have to choose between church and Sunday races.

In 1956, Reckard delivered a sermon warning of the moral dangers posed by racing on the area’s young people. “We have not done right by our children,” he later told a local newspaper. “The least concern of which is the disruption of our Sundays and the worst a stimulation of our young people to excessive and daring driving and the exposing of them to public drinking and gambling.” On Mother’s Day of that year, Buck Baker won the NASCAR Grand National race at Occoneechee. Some 8,000 fans watched Baker beat Lee Petty and Fireball Roberts, but the story that appeared in the newspaper the next day was just too salacious for some to take. “Baker received a special trophy afterward from Ms. Fay Collins, a pretty Hillsboro girl,” it read, “plus a rewarding kiss!”

Later that year, the Orange County Anti-Racing Association was formed. They went above county leaders and, on May 8, 1957, got the state to officially ban racing on Sundays in Orange County. Occoneechee was one of the only early NASCAR tracks that saw any sustained protests. In this case, the protests worked. 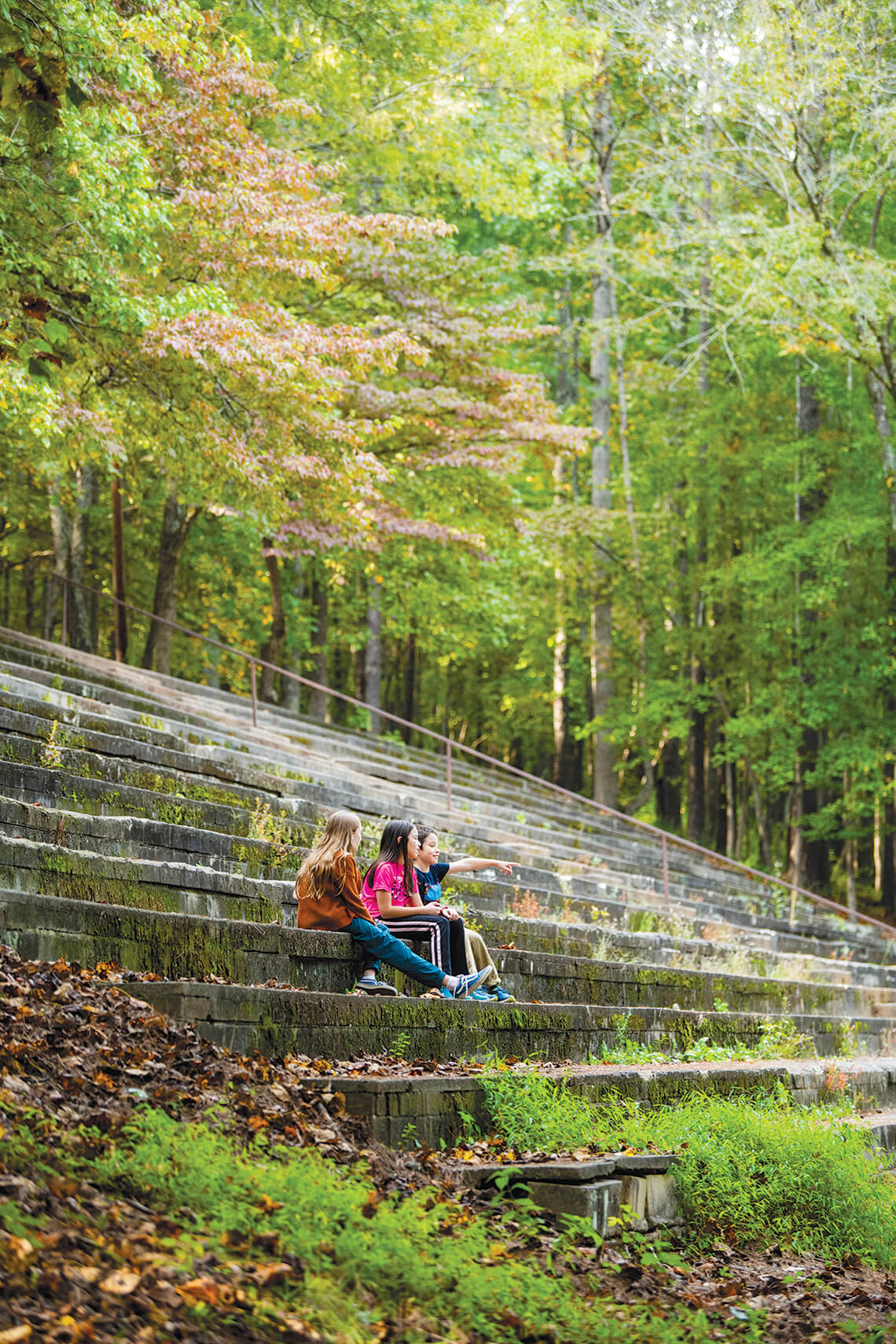 For a while, anyway. By 1961, Sunday racing was back at Occoneechee. The end for Occoneechee came seven years later, when the final race held there, in 1968, managed to deliver a fairly boring result: Richard Petty was seven laps ahead of his nearest competitor when he won. But that victory concealed a fairly violent affair that one historian described as “an epic, fender-crunching, bumper-banging, paint-swapping war out on the track,” in which only nine of the 24 entrants finished. In 1969, Occoneechee’s race moved to the brand-new Alabama International Motor Speedway (now Talladega Superspeedway).

That brought an end to two decades of racing at Occoneechee. When it opened in 1948, the speedway was a mile-long dirt track with not so much as a guardrail separating the racing surface from the infield. It was, as NASCAR historian Ken Martin describes it, 80 percent straightaway and 20 percent turns, which allowed for breakneck speeds followed by hair-raising curves. Engines strained. Brakes broke. To win, Martin says, you had to be good. Some 13 NASCAR hall-of-famers claimed victory there. It was dangerous and risky and thrilling.

Which is what its owners wanted. Bill France Sr., the father of NASCAR, opened the track with several partners. Enoch Staley, who’d also opened a racetrack in North Wilkesboro, invested in Occoneechee. Early NASCAR races featured heavy drinking, guns, and fights among fans. Drivers, too. “The racetrack offered an unpoliced space for uncivil behavior and vile language,” wrote the historian Pete Daniel. 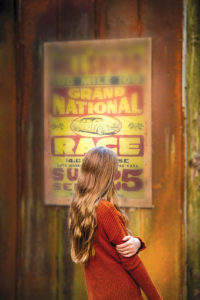 But over time, things that become popular gradually lose their edge and become palatable. Drivers started to complain about the bumpy, pothole-pocked dirt tracks. They wanted to race on asphalt. Speedways had to expand as a result of the demand for tickets. New tracks opened closer to big cities. Corporate tents replaced race-day jails. As Junior Johnson once remarked: “It’s all been tamed now.”

Plus, NASCAR started to expand its way out of the South. There are only so many days on the racing calendar, and the top circuit gradually moved away from North Carolina’s speedways. Occoneechee, Asheville-Weaverville, Bowman Gray Stadium, and Hickory Speedway all lost their biggest races over a three-year span.

Religion didn’t kill off Occoneechee. The track died because time passed it by, and it couldn’t keep up.

Old tracks don’t usually fade away. Most of them get plowed under. Until this year, the last dirt-track race in NASCAR’s top circuit was held in 1970 at the State Fairgrounds in Raleigh. The grandstand remains but the track is now part of the Midway for the State Fair. North Wilkesboro Speedway still stands, visible from U.S. Highway 421, but a dispute between owners has kept the place frozen in time since 1996, rotting and of little use. After losing its NASCAR races in 2004, Rockingham Speedway held two truck series races starting in 2012, but couldn’t keep it going. The only track from NASCAR’s first season that’s still open is Martinsville.

But Occoneechee is still there, still open to the public, saved by the woods that reclaimed it.

In 1985, Richard Jenrette bought and fixed up Ayr Mount, an estate that includes a Federal-era home built in 1815. The property sits on the north side of the Eno, and in the late 1990s, the owners wanted to make sure that the view from the estate would remain pristine. So they looked at buying the property across the water and discovered the remains of the old speedway out there in the woods. They convinced the France family to sell the property, then created a nature preserve and a walking path through the forest. The trail system was connected to the two-mile-long Riverwalk that leads downtown, and the Mountains-to-Sea Trail was rerouted across the Occoneechee property. 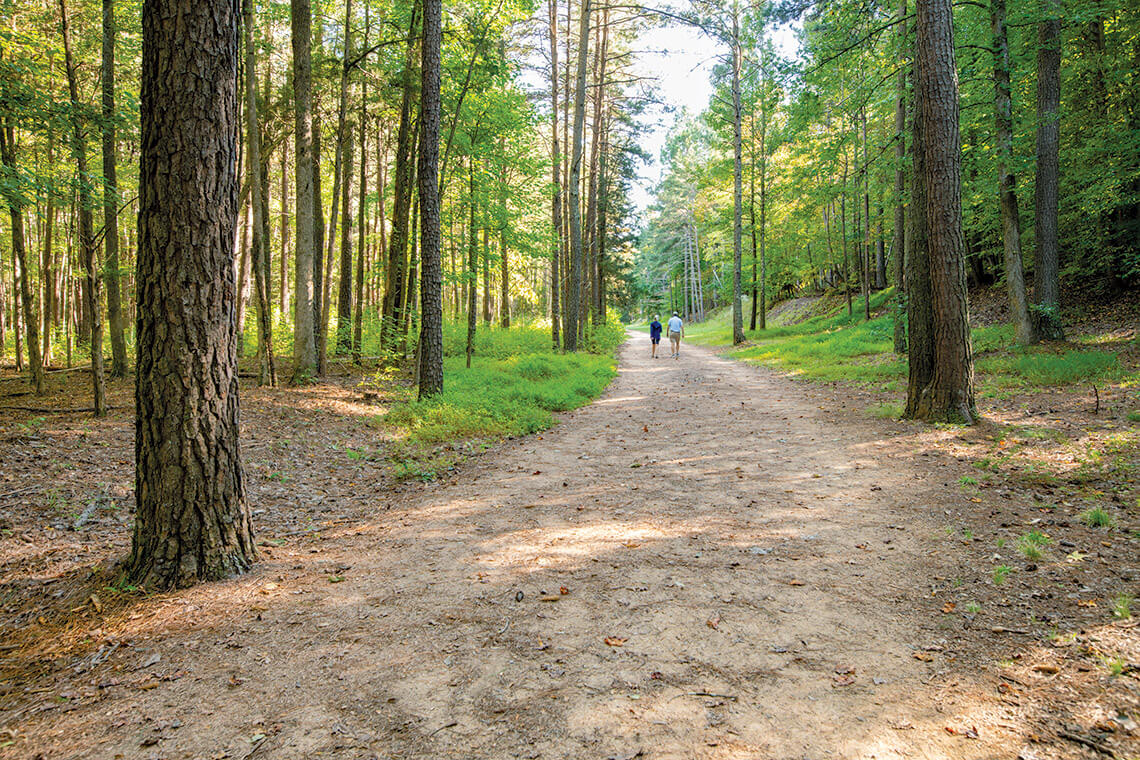 Today, couples enjoy quiet walks like this one along the historic speedway’s front stretch. photograph by Andrew Kornylak

The people here today walk swiftly for the exercise. Some dawdle to look at the informational kiosks that explain what used to be where. Some bring along their dogs. It takes a little bit of imagination to picture this place as a racetrack. Instead of thousands of people, thousands of 50-year-old trees tower over all of it. The forest is its real owner.

It’s a quiet place now. Birdsong filters through the woods. You can hear the subtle gurgling of the Eno on the old backstretch. Occasionally, a train horn breaks the silence. But the trees soften a place that once had a hard edge. Leaves deaden the noise. Pine needles mute the footsteps. Nature has reclaimed a decidedly man-made place. Sure, you can’t hear the cars anymore. Nor the crowds. But one thing remains the same: When you’re feeling cooped up, it’s still the place to go.