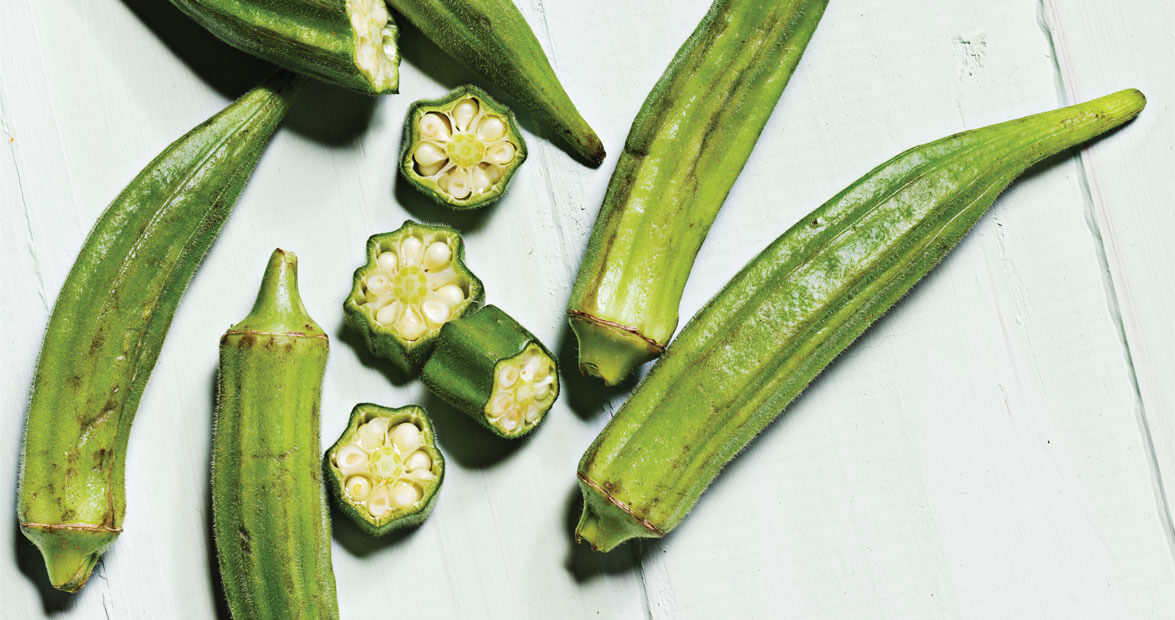 Okra night was a tradition in our home during the summer. I grew up in rural Pamlico County in a house surrounded on three sides by cultivated fields, with nearby woods and swampy pocosin where I’d go in my youth to spot copperheads and snapping turtles. I had a bike and a canoe, and I used both often. And every year, we had a garden that a younger me resented as a source of tedious, unwanted chores. But we always ate what we grew — and we grew a lot of okra.

With its funky, ribbed pods that you have to pick small for them to be edible, and its slimy-when-cooked texture, okra could be a vegetable from another planet. But, like any good North Carolinian, I was raised on the stuff, and I loved it.

We had okra in stews and soups and spaghetti sauces; we had it boiled. Mostly, though, we ate it fried — my favorite preparation for years.

There was something irresistible about okra after it had been chopped, breaded, and pan-fried to within a shade of blackened. Trouble is, there was never enough. Growing up, it was hard to think about sharing with others at the table and take a fair portion. It was also difficult to enjoy fried okra leisurely and to savor the flavor. And, on okra night, there were rarely, if ever, second helpings.

Some 10 years ago, I realized that okra — a vegetable that I thought I knew — had been keeping a secret from me. At a produce stand just north of Asheville, the woman running the place suggested the unthinkable: Try okra raw. I thought she was pulling my leg, but she insisted she was serious. I took a bite, and, just like that, I had a new favorite way to eat okra that is, hands-down, also the easiest: Just rinse, eat, repeat.

On okra night now, instead of fried, I pile raw okra on plates for me, my daughters, and my wife. My girls, Lucy, 2, and Sarah, 4, will tear through some raw okra — they prefer it that way. Sarah doesn’t even like it fried. My wife, Rachel, on the other hand, looks at me like I’ve just sprouted a second head.

As any gardener will attest, okra is tenacious and loves the summer heat.

“Cold weather will kill it really quick, you know. But hot, dry conditions, they just thrive in it,” says David Paul, whose Paul’s Produce sits on a straight stretch of Pamlico County’s two-lane main road, N.C. Highway 55, about halfway between Stonewall and Oriental. If you drive a few miles south on 55 and know where to turn, you’ll find the house where I grew up.

Paul has deep roots in Pamlico County’s dirt. He opened the stand in the early ’90s so that his daughters, Lee and Asheley, could earn their own spending money. Today, Paul has five grandkids, and his daughters — now in their 30s — still work the stand.

“It comes full circle,” he says. “You just don’t believe it until it happens to you. Your kids go away and they try larger city life and everything, but there’s no place like home.” Work was scarce, and subsistence agriculture — growing what you need and eating what you grow — was the rule here as recently as the ’50s. The only jobs to speak of were across the Neuse River in Havelock at Cherry Point Marine Corps Air Station. Growing food was a question of survival. To this day, it’s an exceptionally rural place: There are two stoplights in the whole of Pamlico County.

The subsistence lifestyle is enjoying something of a renaissance with modern consumers who have rediscovered the value of eating locally grown food and buying produce in season. This new agricultural tradition is drawing growers like Doug Jones, founder and former owner of Piedmont Biofarm, who moved to Pittsboro 15 years ago from New York’s St. Lawrence Valley, just miles from the Canadian border. The climate, and the opportunity to grow a wider variety of vegetables, brought him here. Today, he grows unconventional heirloom okra varieties — from the appropriately named Burgundy variant to the treelike Emerald — at Granite Springs Farm, a community farm cooperative in Chatham County. 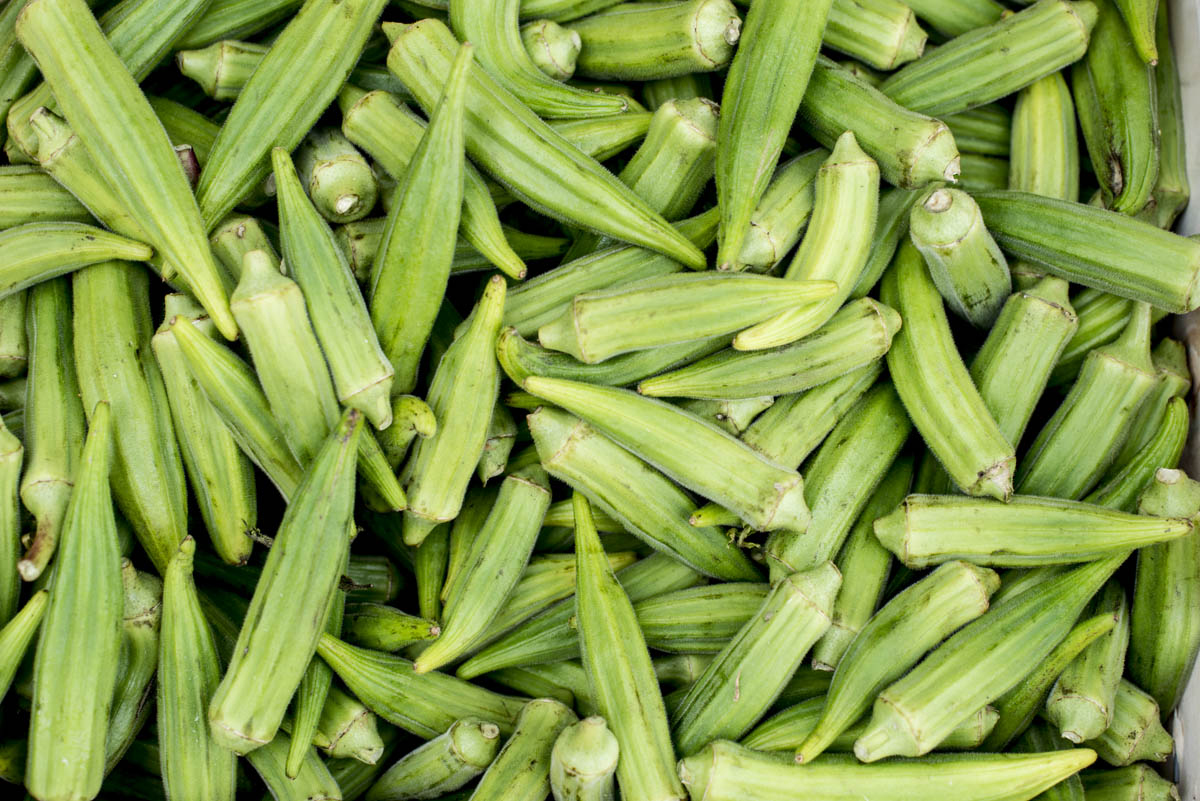 All summer long, farmers markets brim with okra ready for your favorite dishes. Untold bushels of pods will wind up in stews and gumbos, and, of course, chopped and fried. But before your next okra feast, treat yourself to the easiest recipe ever: rinsed and raw. • Photo by Lissa Gotwals. photograph by Horse Studio

If you look for okra on a map, you’ll find it fried in North Carolina, stewed in gumbo in Louisiana, and added to Brunswick stew throughout the Southeast. You’ll find okra growing as a cash crop in Florida and California, and taking over North Carolina gardens in late summer.

The map is even less precise when it comes to pinpointing okra’s origin, which could be anywhere from Africa to India to Southeast Asia. Experts, it turns out, aren’t entirely sure where okra originated.

“It’s very clear when you start to dig into this that it’s very controversial,” says Chris Gunter, an associate professor in North Carolina State University’s Department of Horticultural Science.

Gunter is a horticulturist by trade and by education — he has a doctorate in the study of growing plants — yet his connection to vegetables goes deeper than professional interest. He is genuinely excited to discuss the detective work used to untangle okra’s historical roots.

“One of the ways that we look at how plants are related, or how plants get to us, is to find where in the world these plants are grown and eaten,” Gunter says. “When you do that, you find Southeast Asia, India, and Africa all have long histories of cultivating okra.” But it’s hard to tell with any certainty who had it first.

The most popular origin story is that okra began in Africa and came to the 13 colonies on slave ships. The English term for the plant, in fact, comes from Nigeria’s Igbo language. Thomas Jefferson wrote about growing okra in his garden, Gunter points out, and native tribes developed their own strains. One heirloom variety, Fife Creek Cowhorn, was given to a Kentucky family by an old Creek Indian woman around the start of the 20th century, as the story in a seed catalog goes. For there to be a tradition of okra in a place, it has to be grown there, Gunter says. He explains that okra doesn’t travel well. For much of history, it was only really eaten where the climate was right to grow it. Here in North Carolina, the climate is right — especially in August — so there’s a history of growing okra and a tradition of eating it.

Conditions are perfect for okra elsewhere, too, of course.

“One reason I love okra, and I love watermelon and I love tomatoes, is I associate all of them with August,” says Angelina Koulizakis-Battiste, namesake of Angelina’s Kitchen in Pittsboro. “It just evokes childhood memories,” she says.

Koulizakis-Battiste is thinking, though, of summers in Greece, where okra is called bamies (pronounced: bom-yehs). There, it’s often paired with tomatoes and included in chicken dishes. Koulizakis-Battiste turns up her nose at our beloved breaded-and-fried okra, instead preferring it lightly sautéed in olive oil — which is what she means when she refers to “fried” okra.

As far as she’s traveled to develop her tastes, and as international as her culinary approach seems, her rhythm — and, in her own way, her menu — is pure North Carolina. She only serves okra in season, and it doesn’t travel far to get to her. Koulizakis-Battiste gets most of her ingredients from within a 25-mile radius — 60, tops.

The cook grew up eating okra many ways, and she serves it to customers in flavorful dishes, but does she eat it the way I’ve come to love it: uncooked?

“I’ve never really appreciated okra raw,” she says. “But now that you’ve mentioned it, I’m going to try it.”

And just like that, a new okra tradition is born.