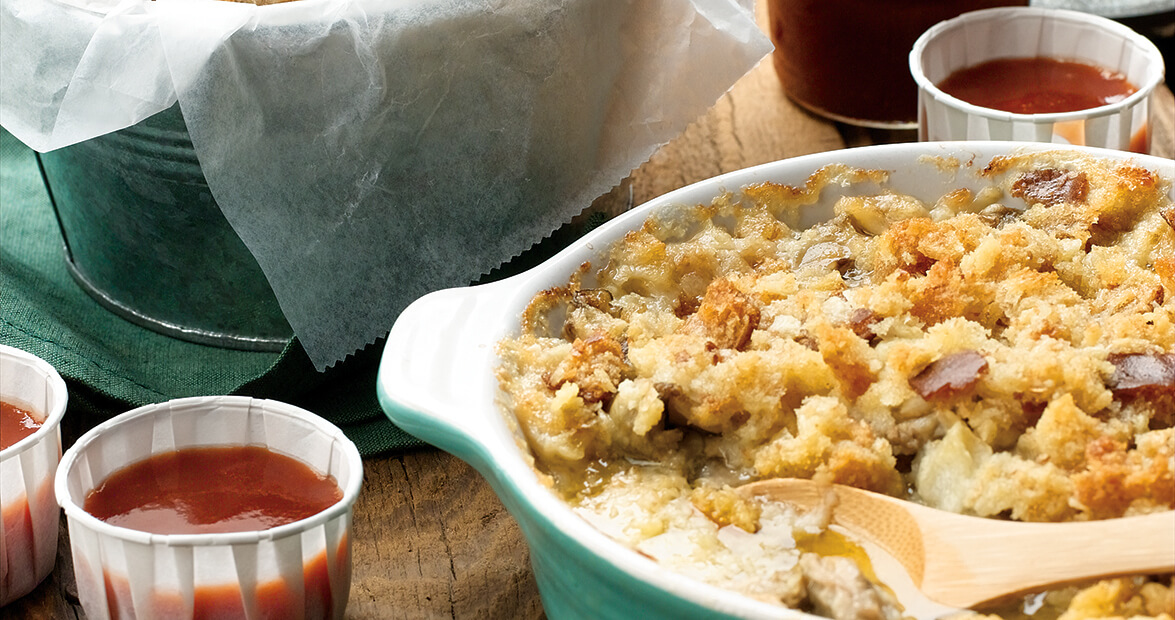 In the early 1900s, oysters came to Cherryville by way of the Chesapeake Bay. Each fall, a salesman in Baltimore sent several bushels from the bay to the door of J.H. Rudisill’s general store. The oysters were a gift from the salesman to thank Rudisill for buying his goods.

Rudisill’s friends, family, and employees anticipated the oysters’ arrival. Rudisill took the oysters and turned out a spread of them fried and scalloped, and served them with cocktail sauce.

The meal became an annual event for a time, and the Rudisill name became synonymous with it. To keep memories of the meal alive, J.H. Rudisill and his wife, Sarah, shared the recipes with their relatives.

Mamie Rudisill Houser regarded her recipe for scalloped oysters as a family keepsake. Every August at her home in downtown Cherryville, Mamie celebrated her birthday with a baking dish full of scalloped oysters. When she died, the recipe lived on with her daughter and then her granddaughter.

For a century, the recipe has remained the same: Shuck some oysters; layer them, season them, grease them; then soak them in the oyster liquor found in the shells.

In 2011, Mamie’s granddaughter, Cathy, submitted the scalloped oysters recipe to a cookbook to raise money for the Cherryville Historical Museum. The local historical society published the cookbook to coincide with the centennial anniversary of the building that houses the museum.

Bobbie Rudisill edited the volume. Her late husband, Edwin, was one of J.H. and Sarah Rudisill’s 10 children. Knowing how much the oyster supper meant to that family, Bobbie knew the cookbook needed to be about more than lists of ingredients and instructions. It needed to tell the history of Cherryville.

The cookbook includes stories about families, like the Stroupes and the florist they operated downtown for 17 years. The Stroupes submitted a recipe for shrimp hush puppies. And there’s a mention of J.H. Rudisill and Company’s annual oyster supper next to Mamie’s scalloped oysters and recipes for fried oysters and oyster cocktail.