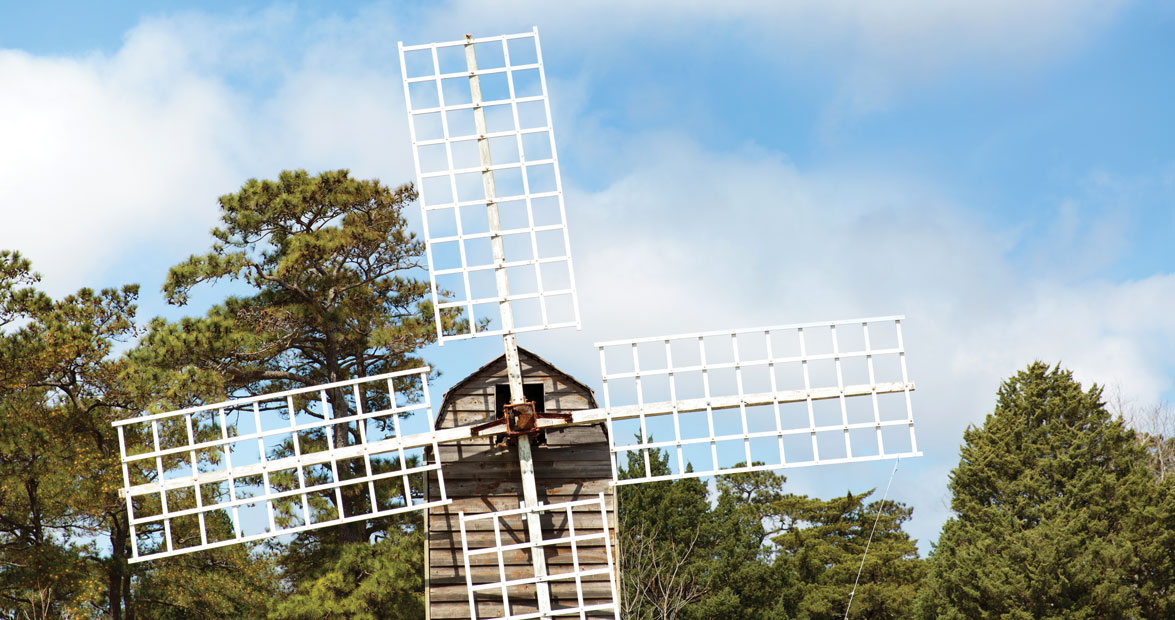 Lynanne Wescott was pregnant, and her mind had turned to that staple of storybooks: windmills. Not the towering structures we associate with Holland, but a far older type — known as a post-mill windmill — whose history stretches back to the 12th century. Quaint and compact, they’re “a dime a dozen in England,” Wescott says. They’d been brought to America as early as 1621 for milling and irrigation, and, in the 1970s, Wescott decided that one belonged on the Outer Banks, too. 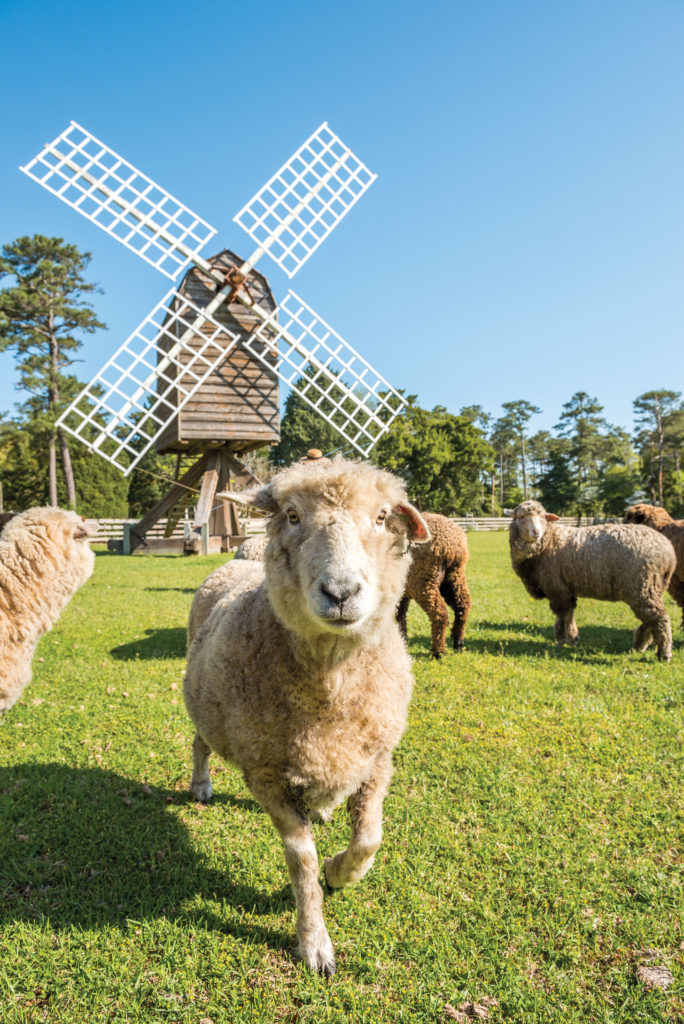 At Island Farm on Roanoke Island, the windmill is a landmark for animals and visitors alike. photograph by C2 Photography

Who doesn’t love windmills for their romance, their place in history, their graceful silhouettes on a horizon? And with prevailing northeast and southwest winds and weathered cottages, the barrier islands seemed to Wescott well-suited for one of these magical structures. Her bosses at the Cape Hatteras National Seashore and the Wright Brothers National Memorial, where she managed the book and souvenir shops, liked the idea, but didn’t have a budget for it. So Wescott took out a loan to buy property in Nags Head, and began the long process of bringing her vision to life.

A post-mill is an ingenious bit of early — and movable — agricultural technology, consisting of a small, roofed house for milling, perched above the ground with a ladder leading up. The “post” in the name refers to a center post upon which the little house revolves. A long pole protruding from the house is attached to a wheel. By moving the wheel around a track — a job for an ox — the entire structure can be turned to the most advantageous position for catching the wind. Because, as any beachgoer knows, sea breezes are as capricious as life itself.

Poring through historical records, old maps, and architectural sketches of post-mills, Wescott discovered that her favorite windmills were in such extensive use along the North Carolina coast at the time of the Civil War that a Union soldier stationed on Hatteras Island observed “a greater number than I supposed were in existence in the whole country.” One post-mill had stood in Manteo, two had existed in Avon, and another was in Rodanthe. In the Cape Fear region, post-mills pumped water to flood rice fields, but by far, most of them north of Pender and Onslow counties were gristmills. The sites of about a hundred 18th- and 19th-century windmills have been discovered in Carteret, Hyde, and Dare counties.
But few people seemed to know about them, much less remember them. That fact gave Wescott a sense of purpose: She would bring back the “absolutely authentic” post-mill windmill to the land where it had once belonged.

“It was no hot glue and double-faced tape thing,” she says. Every single piece of the building would be created and fitted with the same tools as would have been used in the 17th century. “There was a cheaper, easier way to do it, but that wasn’t the point,” she says. 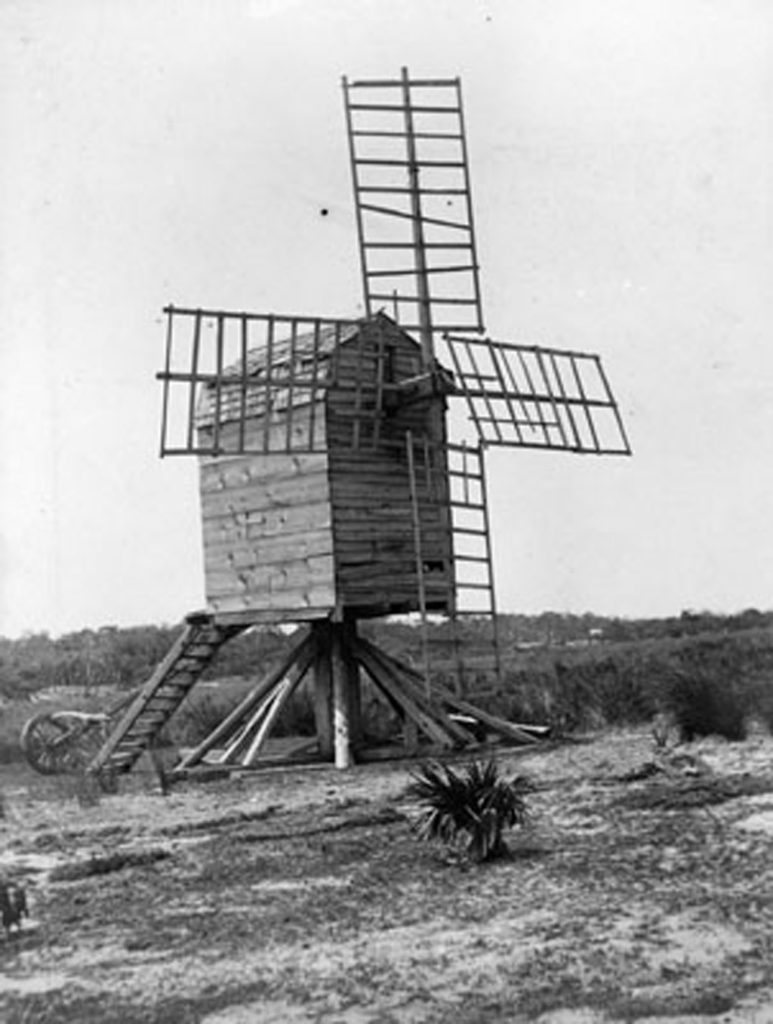 The windmill on the sound near Cape Hatteras was in full use until August 1905, when a heavy gust took it down. photograph by North Carolina Museum of History

As she investigated where to find materials and people skilled to do the work, she came across a historically certified English millwright in Surry County, Virginia, and a stonemason who had cut stones for watermills. “I didn’t know people like that even existed,” she says.

The drive wheel to power the interior had to be exact, so that the gears would work, and the wood had to be able to withstand stress. Most of the windmill was made of oak, with the house clad in cedar. The central piece, on which the house revolves to face the wind, was even more critical: It had to be sturdy; it had to last. A 200-year-old oak tree grown in Germany’s Black Forest was cut, dried, and shipped by boat to North Carolina.

One year turned into two, and then three, before all the parts were in place. “I wanted it to feel like the mill belonged to the area. That this was its home,” Wescott says. She also wanted it to be a reminder: “The folks who’ve been here forever make it look easy to live here, but it’s not,” she says. “The windmill should be a symbol of what life was like on the Outer Banks.”

The beauty of a post-mill windmill is that it’s designed to be transported. Wescott moved to Philadelphia in the early ’80s — her windmill stayed put — to establish a bookstore at the U.S. Mint. Eventually, she went to law school. “The mill was safely launched, like a child into the world,” she says. “It was someone else’s turn.” She sold the property on which it sat, known as Windmill Point, to Dr. Sarah Forbes, who incorporated the windmill into a themed restaurant that closed in 2007. After that, the windmill fell into disrepair. The Town of Nags Head and the Dare County Tourism Board bought the property, but there was no use for a windmill, no matter its authenticity.

John Wilson, a history-loving founder and member of the Outer Banks Conservationists (OBC), stepped in to take his turn with the windmill. His nonprofit was restoring Island Farm, at the north end of Roanoke Island, to portray a thriving mid-1800s farming and fishing homestead. The OBC and the Dare County Tourism Board joined together to bring the post-mill across the sound to Island Farm, where it will be restored.

Because authenticity is as vital to Wilson as it was to Wescott, the windmill is situated away from buildings that could block the airflow, just as it would have been in the 1800s, and facing the prevailing winds. The mill shares a pasture with cows, sheep, and the oxen who — when a restoration is finished and the inner workings are fully functional — will pull the wheel around a track. Then, “Lynanne’s windmill,” as the locals know it, will return to its true, original purpose.

“My cries in the wilderness to save the windmill were heard,” says Wescott, now 66. “If things are meant to be, they work out.” The daughter Wescott was pregnant with when the windmill was being built lives in Manteo with her own children, who call their grandmother Hal. One day on an outing to Island Farm, Wescott’s daughter pointed to the windmill and told her sons, “You know, Hal built that.”

Wescott laughs and says, “It was like telling someone you built Cinderella’s castle.”