In 1963, the high-rise Herbert C. Bonner Bridge opens, spanning Oregon Inlet and carrying a parade of tourists to visit the recently established Cape Hatteras National Seashore, the first of its kind. The national seashore encompasses a swath of the Outer Banks including the southern part of Bodie Island as well as Hatteras and Ocracoke islands — affording them the chance to remain as both wild habitat and oceanfront recreational areas.

The Bonner Bridge — built after a decades-long debate about the wisdom of opening up such maritime wilderness to steady traffic — is just one of several planned to provide access to remote beaches, including some of the most pristine natural habitats on the coast. But some fear that private and commercial development will overtake the coast, either destroying what makes it so beautiful or making it inaccessible to most North Carolinians.

Of concern to three governors — Luther H. Hodges, Terry Sanford, and Dan Moore — are the barrier islands between Ocracoke and Beaufort inlets, including Shackleford Banks, Cape Lookout, and Core Banks, all steeped in maritime history and home to an astonishing variety of species.

In 2020, with the hindsight of more than half a century, Cape Lookout National Seashore Superintendent Jeff West explains the imminence of the environmental threat: “There were several housing developments that were already planned over here. They planned to build a bridge over to the seashore … It would absolutely have been developed — there’s no question.”

By the 1960s, state officials want to extend to the area the protection of national seashore status. They envision a new dimension to the effort begun by the U.S. Congress in the 1800s: to guard a dangerous coastline more than 300 miles long with a chain of lights, erected at intervals of 40 miles, each projecting a distinctive beam at least 20 miles out to sea. Any mariner passing close offshore would always be in range of a shore beacon and know exactly which one it was — thereby finding safe harbors and avoiding treacherous shoals. It took the better part of a century to complete the chain. 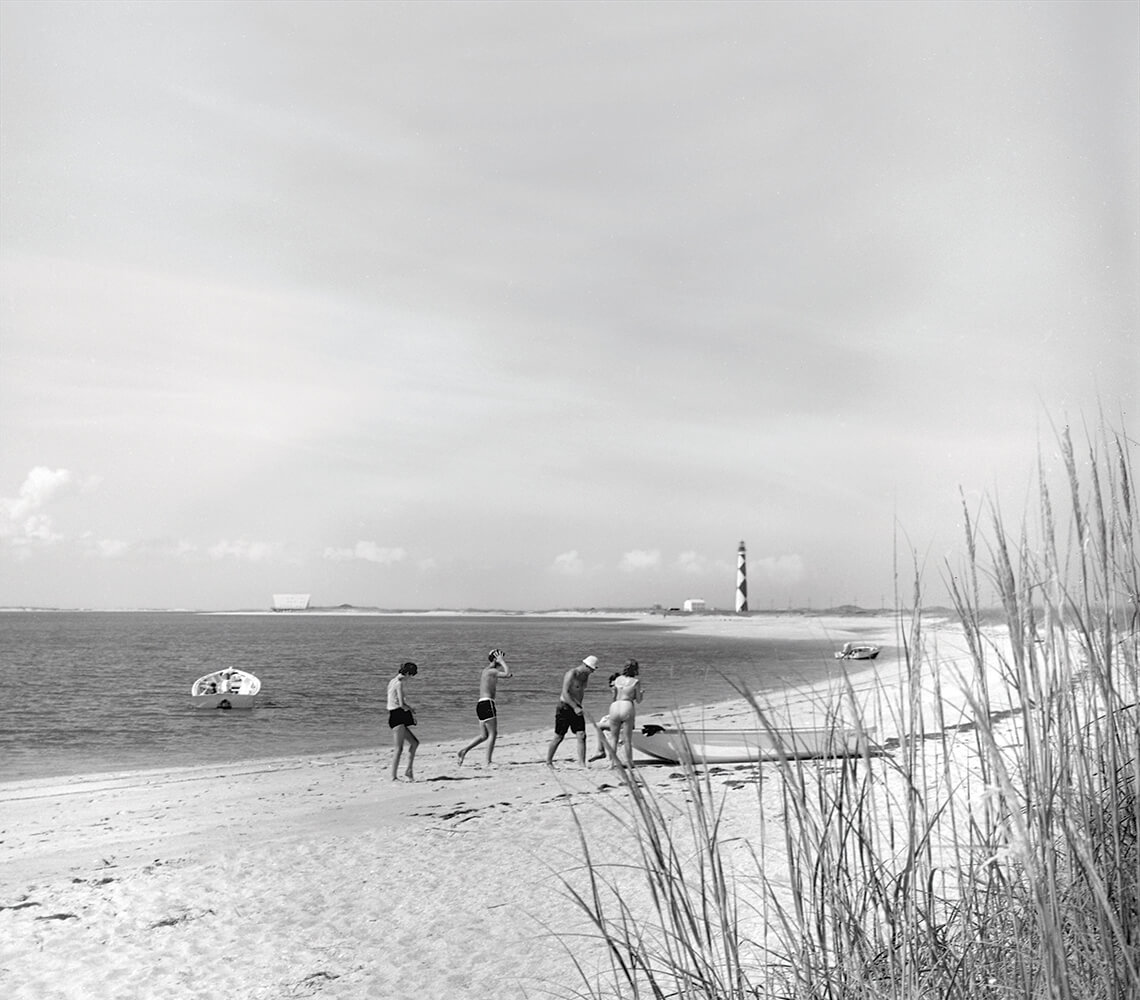 A 1965 issue of this magazine, then called The State, explained that those “who don’t care for crowded beaches go over to the Cape, beach their boats, and picnic, swim, skin-dive, fish, and hunt shells.” photograph by State Archives of North Carolina

Cape Lookout, jutting far into the sea just east of the shipping channel leading to Harkers Island, Beaufort, and Morehead City — the so-called “horrible headland” because of the long seaward reach of its shoals — was a natural early choice for a beacon. Congress authorized it in 1804, but it took until 1812 to complete the 107-foot-tall tower. The original structure, painted in red and white stripes with 13 lamps fueled by oil, was brick with an octagonal wooden exterior.

Like many early beacons, the Cape Lookout Light was disappointingly dim — visible for only about half the needed distance. It fell into disrepair, and erosion threatened to wash it away. But its position signaling the approaches to Beaufort and Morehead City was vital, so a new lighthouse replaced it in 1859 — 163 feet tall, with nine-foot-thick brick walls at its base, which had a diameter of 28 feet. Its fixed white light, projected through a Fresnel lens, now reached up to 18 miles out to sea above a double-decker exterior catwalk for lookouts.

When President Lincoln included North Carolina ports in the Union blockade in April 1861, Gov. John Ellis ordered all coastal lights to go dark, and the Fresnel lens from Cape Lookout was removed to Beaufort. By the summer of 1862, all of the coast except the region around Wilmington was occupied by the U.S. Army. The U.S. government relighted Cape Lookout in 1863.

In 1873, a new keeper’s cottage replaced the old, dilapidated one. And that year, the Light-House Board gave the tower its signature white and black diamonds to distinguish it from its sister lighthouses built to similar designs: Cape Hatteras with its spiral, Bodie Island with its horizontal stripes, and Currituck with its red brick.

The chain of lighthouses becomes the icon of North Carolina’s coastal identity, rich in stories of seafarers.

In the aftermath of the Civil War, the U.S. Life-Saving Service strengthened the lighthouse chain with a cordon of stations every five miles, where practicable — three of them at Cape Lookout, Portsmouth Island, and Core Banks. Surfmen trained, walked patrol, and, when necessary, rescued mariners in distress, sometimes using beach apparatus to shoot a line to a grounded vessel and carry off crew and passengers with a breeches buoy — a canvas chair hauled ashore via the ship’s masts and a system of pulleys. The other, far more dangerous, method was launching a surfboat, usually in the worst weather and seas, to carry them off.

Now, in the mid-20th century, a different chain of coastal protection takes shape, anchored by Cape Hatteras National Seashore. In 1965, after long negotiations to convince the federal government to invest in their plan, state officials succeed: the U.S. Congress authorizes the establishment of Cape Lookout National Seashore, allocating $3.2 million for acquisition and development of an area that eventually extends 55 miles, covering 28,000 acres of water, wetlands, and sandy islands. In consideration for the land ceded by the state, the federal government transfers one and a half acres of land that it controls in Hatteras Village for use as a public health facility. Cape Lookout becomes the fourth national seashore, following Cape Hatteras, Fire Island in New York, and Assateague in Maryland and Virginia.

In “A Joint Resolution Endorsing the Cape Lookout National Seashore Project,” the state legislature cites the value of Cape Hatteras, the pioneer national seashore established in 1953: “WHEREAS, the history of Cape Hatteras National Seashore Recreational Area has proved the immeasurable esthetic, economic, and recreational value of such an asset within North Carolina …”

It endorses the recommendation of Congress and moves to acquire “by donation, purchase, or condemnation, all those lands and marshlands within an area on the Outer Banks of North Carolina bounded on the North by Ocracoke Inlet, on the south by Cape Lookout Point and the Atlantic Ocean, on the east by the Atlantic Ocean, and on the west by Core Sound, Barden Inlet and Lookout Bight and any lands, marshlands, or islands contiguous thereto necessary for the creation and maintenance of Cape Lookout National Seashore …”

The land doesn’t include the site of the now-automated lighthouse and dock, still an operational station of the U.S. Coast Guard. The designation as a national seashore effectively protects from commercial development the land around the lighthouse complex, including Lookout Bight, where sea turtles and dolphins often swim among anchored sailboats and cruisers.

The designation places a primary value on maintaining the quality of the natural environment as a habitat for fish, birds, sea turtles, and other creatures while providing for recreational use — as visitors eventually number nearly half a million per year.

“You know, there’s just no place on the East Coast where you can come and experience an undeveloped barrier island except for here,” Superintendent West says. What has been saved? “The opportunity for solitude,” he says. “There are many places where you can go out on the seashore, and you can look up north, and you can look south, and not see a single soul.” 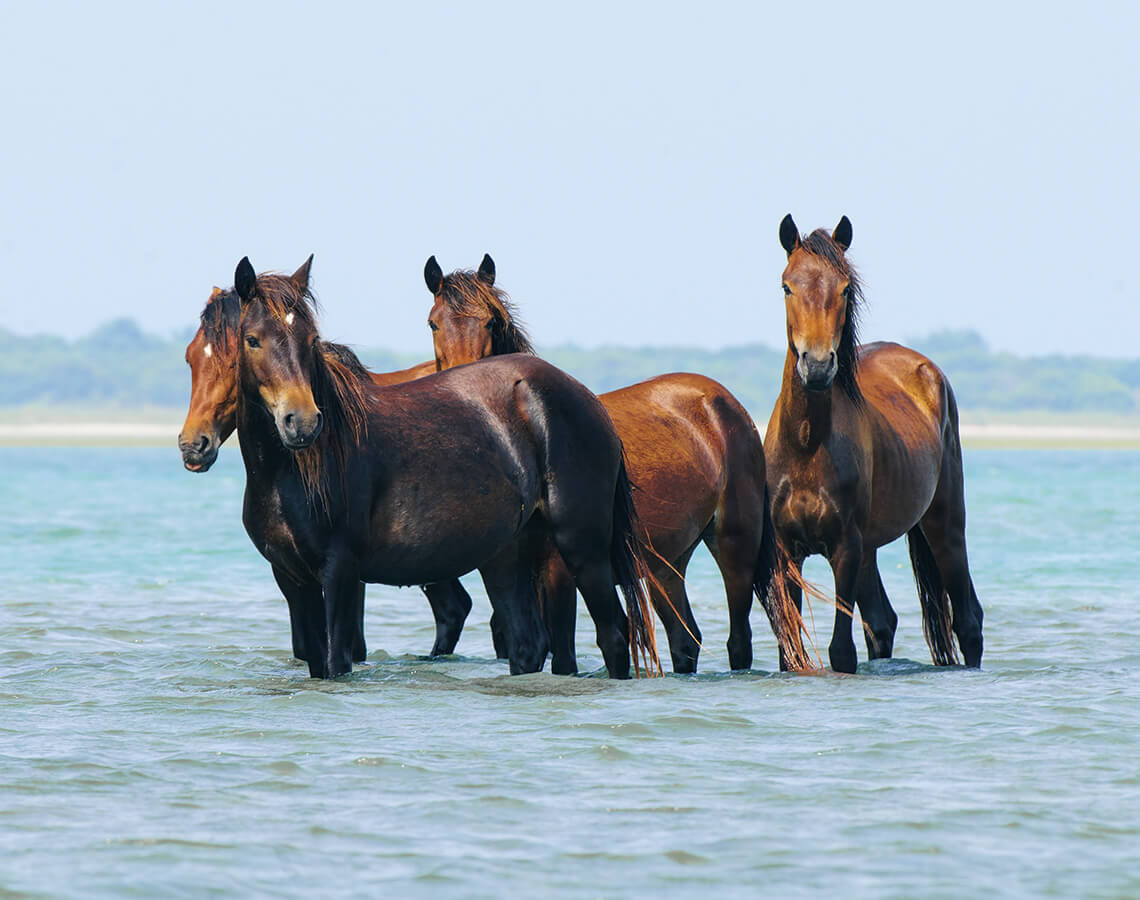 This special habitat, where land meets water, nurtures more than 500 species of plants, among them a profusion of grasses and wildflowers. It is home to a remarkable range of creatures. Four kinds of sea turtles nest on its beaches and swim in Cape Lookout Bight — including the great leatherbacks and loggerheads. Five freshwater species inhabit the inshore waters. And more than 20 species of marine mammals cruise offshore, including seals, dolphins, and whales.

And on the southernmost strip of the seashore, Shackleford Banks, a herd of Banker horses has survived in the wild perhaps since the days of the Spanish expeditions — small, hardy animals that typically stand just 12 hands (four feet) tall. During storms, they fort up in dense thickets or find refuge under the live oaks that form the maritime forest. They forage on marsh grass, spartina, and sea oats, and drink from shallow ponds or dig until the water table rises to fill a pool.

The chain of lighthouses — individually and together — becomes the vivid icon of North Carolina’s coastal identity, rich in the stories of seafarers, fishermen, and life-savers. With the addition of Cape Lookout, the national seashore, identified by those lights, now includes more than a third of the state’s coastline. The map declares a long stretch of North Carolina real estate so priceless it must be protected and shared with the rest of the nation forever.