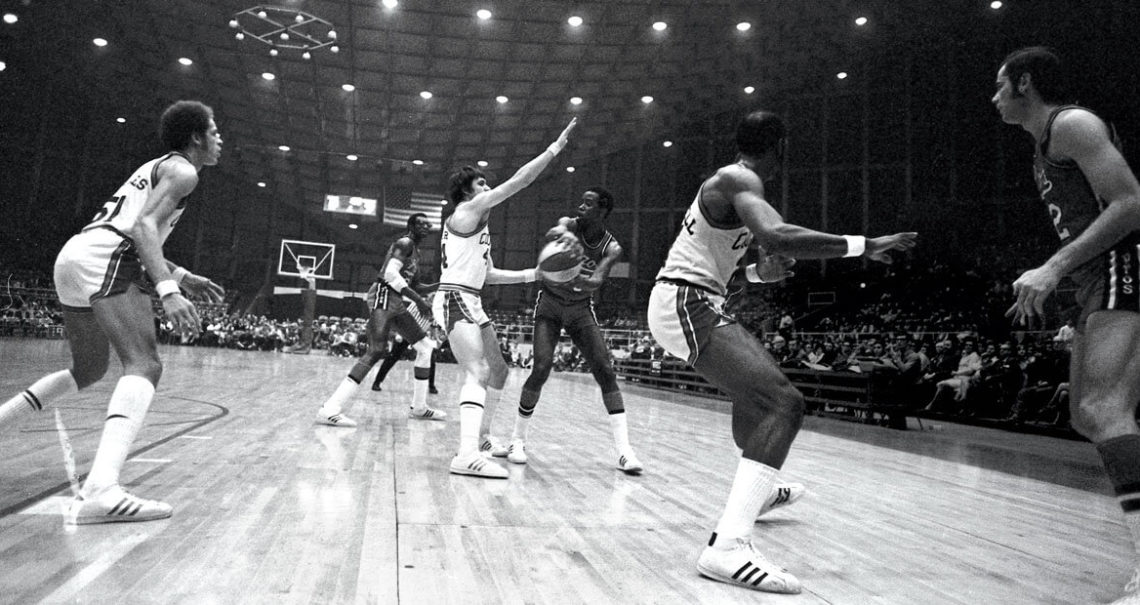 After National Geographic puts North Carolina on the map as the “Dixie Dynamo,” a place of national interest, the state finds itself playing in a higher league — figuratively in business, education, and technology and, in the sporting scene, literally.

In 1960, Kinston has a population of about 25,000 — considered by many to be too small a market to support a professional baseball team. The Eagles, a Washington Senators farm team, left in 1957 after only a few weeks. But in 1962, Kinston attracts a stronger team, affiliated with the Pittsburgh Pirates, to join a league that includes rosters in Burlington, Durham, and Greensboro: the new Kinston Eagles. In their first season, the Eagles take the Carolina League championship.

As Kinston shows it can support a minor league enterprise, many sports fans dream of a major league franchise — not necessarily in baseball.

The state has long gloried in its college basketball tradition — teams at UNC Chapel Hill, Duke, Davidson, Wake Forest, NC State, and others have won legions of loyal, even rabid fans. But it has never been home to a professional basketball team — National Basketball Association (NBA) franchises have mostly been reserved for large metro areas with fan bases that can fill giant arenas, such as New York, Boston, Los Angeles, and Chicago. And since the 1953-54 season, many of their games have been nationally televised — a generous source of income that helps insure against losses from uneven attendance. In 1960, the NBA fields just eight teams. 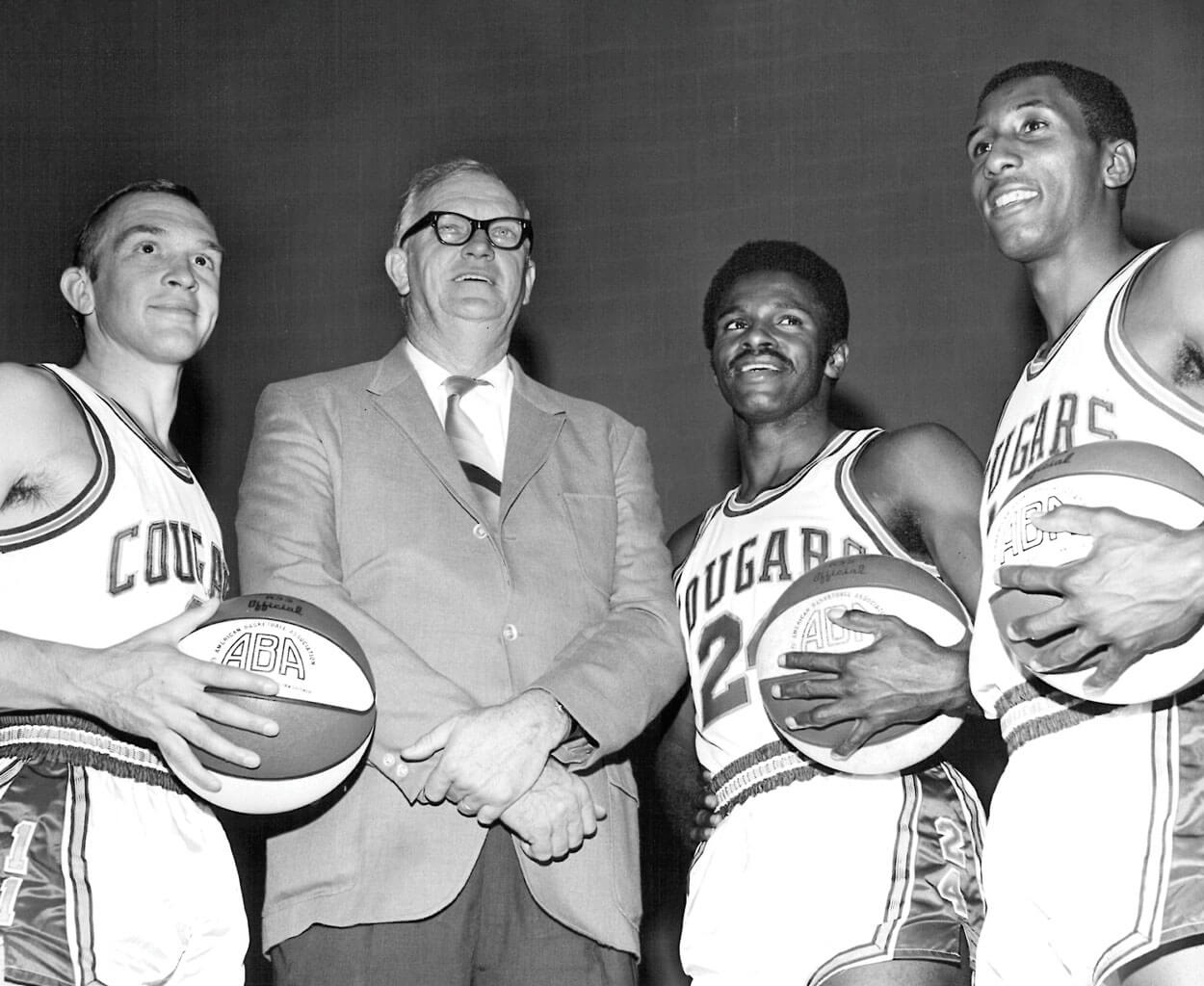 In 1969, Bones McKinney signed on to coach the Carolina Cougars, part of the American Basketball Association. The team included (left to right) Bob Verga, Calvin Fowler, and Gene Littles.

Officially founded in 1949, the NBA evolved from the Basketball Association of America (BAA), where a blade-thin, 6-foot-6, 185-pound shooter got his professional start. Horace “Bones” McKinney was already a legend in his own right — as much for his clownish antics on the court as for his accurate shooting. Whenever a ref called a foul on him, McKinney would wait until the ref’s back was turned, then drop to his knees in feigned supplication. McKinney starred on the Durham High School team that captured three state championships and won 69 consecutive games. In a closed-door scrimmage, they claimed a 15-point victory over the varsity squad of Duke University.

During the 1942 season at NC State, McKinney led not only his team but also the entire Southern Conference in scoring. He did a two-year-and-nine-month stint in the Army as a draftee, then played for UNC Chapel Hill in 1946. But money was always a struggle, and, now married to his lifelong love, Edna, he dropped out to earn his living at the Hanes hosiery plant.

He writes, “The only way I could ever play basketball again was for somebody to pay me a salary to put on a uniform. And since, in 1946, there was no such thing as professional basketball, there was no chance of that.”

But he was wrong: Red Auerbach, head coach of the Washington Capitols (who would forge his own legend with the Boston Celtics starting in 1950), signed McKinney for $6,750 per season — with $500 up front. McKinney went on to coach as well as play for the Caps, recruiting their first black player, Earl Lloyd, and finishing his pro playing career in Boston, reunited with Auerbach.

But “Bones” wasn’t finished with basketball. He served as assistant coach at Wake Forest for five years, earning $50 a week, even as he pursued theological studies to become an ordained minister and preached Sunday sermons at far-flung Baptist churches. “You might think that coachin’ and preachin’ don’t mix,” he writes sardonically, “but all coaches have to do a little preachin’ to their players from time to time and most preachers have to coach the members of their congregation, especially before the collection.”

The games are as much about showmanship as they are about athletic prowess. Bones McKinney fits right in.

As Wake Forest’s head coach between 1957 and 1965, he compiles a record of 122-94, including two conference championship seasons. He is a theatrical figure on the court, dressed in signature red socks — a new twist on his superstitious habits with the Caps. Dressing one night for an away game, he realizes that he has forgotten to pack socks. The only pair he can borrow is bright red. “We won that night, so I wore them the next night and the next night and they became a tradition,” he writes. The one game when he forgets to wear them, the team loses, and that’s the last time he forgets.

He guzzles 25 Pepsi-Colas per day and chain-smokes cigarettes. Courtside, he is always in motion. He is said to have once used a seat belt to restrain himself from his tendency to walk onto the court. Inevitably, legends grow up around him.

So in 1967, when a rival league forms to challenge the monopoly of the NBA — and one of its franchises winds up in North Carolina — it seems fitting that McKinney finds himself in the middle of it. He leaves Wake Forest after a disappointing season.

The American Basketball Association (ABA) brings with it an opportunity for new markets — in places like Denver, Indiana, New Orleans, and Dallas. The league encourages a wide-open, running “playground” style of play, uses red-white-and-blue balls, extends the shot clock from 24 to 30 seconds, and adds a three-point field goal. Its games are as much about showmanship as they are about athletic prowess. McKinney fits right in. 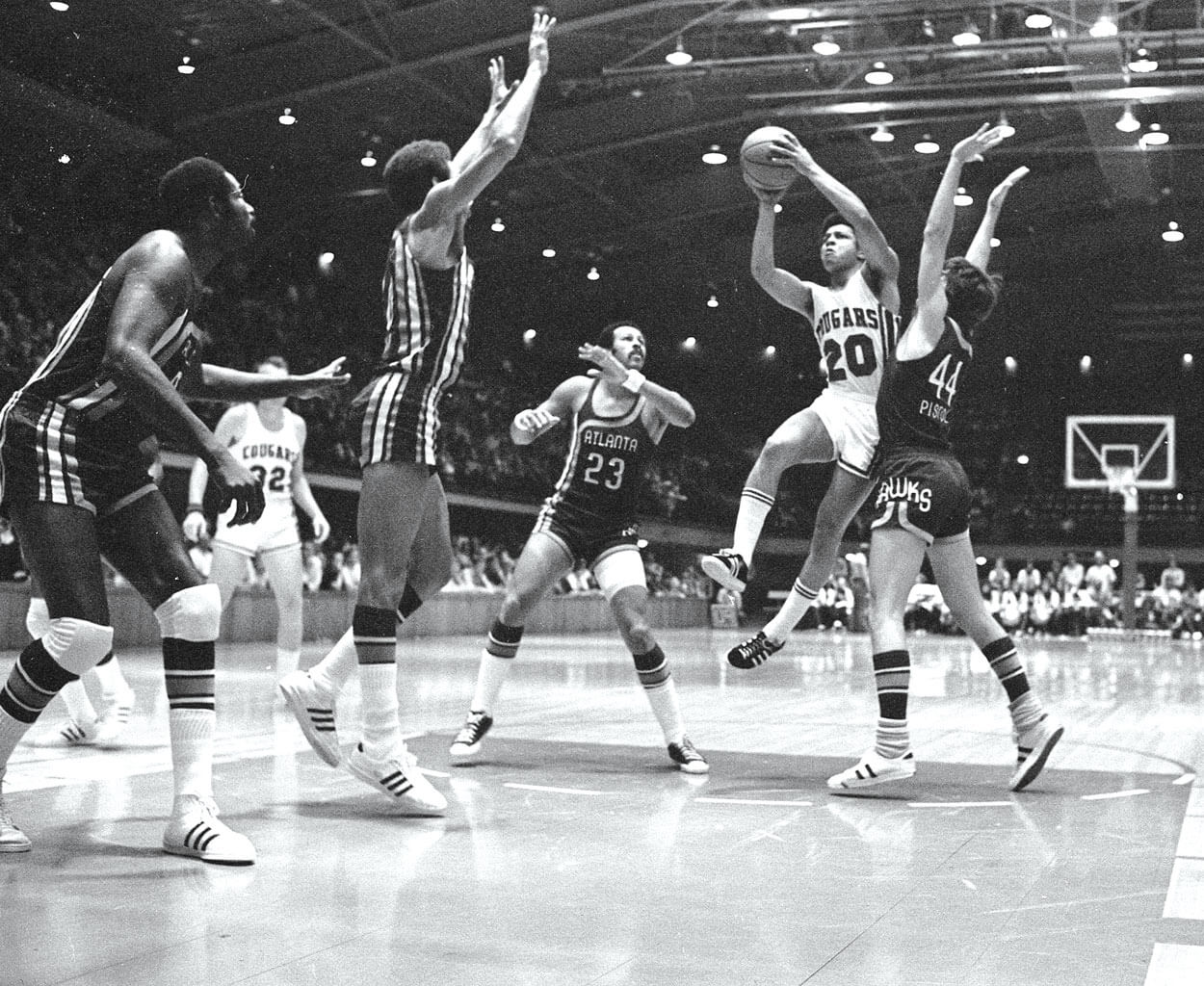 In the early 1970s, talk of merging the ABA and NBA gave rise to a series of interleague exhibition games between ABA teams like the Cougars and NBA rivals like the Atlanta Hawks. The two leagues finally merged in 1976.

One of the new teams, the Houston Mavericks, struggles on and off the court. Jim Gardner, a North Carolina congressman who, legend has it, won his controlling interest in the Hardee’s hamburger chain in a poker game, heads a group of investors called the Southern Sports Corporation. Gardner’s consortium buys the Houston franchise for $350,000 and moves it to Greensboro in 1969. And like the new freewheeling league, Gardner’s consortium takes a novel approach: The team will operate as a regional franchise to maximize its fan base. The newly renamed Cougars will play their “home” games in Greensboro, Charlotte, Winston-Salem, and Raleigh. If one city isn’t big enough to support a pro team, they are betting that four cities together can.

Gardner hires McKinney on a three-year contract for $35,000 per year. McKinney is delighted to find himself coaching young players from his old conference: Bob Verga, who played for Duke from 1964-67 and holds the single-season scoring record with an average of 26.1 points per game; Doug Moe, a 6-foot-5-inch forward who averaged 20.4 points and 14 rebounds per game with UNC in 1960-61 before being unjustly suspended in a betting scandal; another UNC alum, Larry Miller, All-American and two-time ACC Player of the Year in 1966-67 and 1967-68; and George Lehmann, who played under McKinney during his freshman year at Wake Forest.

Of the 12-man Cougars game roster, four are African-Americans.

The Carolina Cougars are pioneers — no other team has ever tried the regional franchise approach. Frank Deford, a writer for Sports Illustrated, claims credit for the idea. Sports such as baseball and basketball have long seasons with lots of games, and the big-city markets are already taken, he writes in the October 21, 1968, edition of SI. A regional team could work especially well in North Carolina, “a great basketball area of medium-size cities with good arenas.” When he revisits the idea on January 19, 1970, he jokes that his “baby” has been “taken in by some people who were much more capable of providing for him than I was. They have nourished him and educated him and given him a name — Carolina Cougars, or Kahlahnah Koogahs, as the team is known in the loving vernacular.”

The team’s example, Deford predicts, “is bound to cause repercussions through the whole of professional sport. The Cougars have proved that a regional franchise … is not only interesting but downright practical.”

The new league, however, lacks a TV contract that will guarantee a reliable big income stream. Its teams play in smaller arenas, sometimes to sparse crowds. Many in the sports world disparage the ABA. Auerbach, by now firmly established with the formidable Boston Celtics, says, “We thought it was a bunch of guys trying to become pests. I felt, ‘Let ’em rot.’”

But the Carolina Cougars present a fast-moving, colorful style of play and gain strong followings in Greensboro and Charlotte. (Raleigh fans seem less enthusiastic, judging by the crowd size at “home” games there.) Bones McKinney is just as colorful: He coaches the Cougars in between directing the rehabilitation program of the state prison system, working the broadcast booth at ACC games, and preaching as a Baptist minister. He is never still, directs critical monologues at the refs, and remains as much a star as any player.

At one game, protesting a call, he supposedly tells the ref: “You are either a thief or incompetent.” The ref ejects him from the game. McKinney asks him why. The ref replies, “Because you called me a thief.”

“Oh, my goodness, no indeed,” McKinney tells him. “I gave you a choice.”

The ABA lasts just nine full seasons before being absorbed into the NBA — and by then, the Cougars are gone from the scene. But the dream of a pro basketball franchise in North Carolina is a stubborn one, big-league ambition outstripping economic reality — for a little while longer.

Special thanks to the volunteers of the North Carolina Baseball Museum in Wilson.

Administration of Programs in exercise Science ESs 480. “The History of the NBA and its TV Rights,” April 29, 2014: blogs.fortlewis.com.

Sarmento, Mario R. “The NBA on Network Television: A Historical Analysis.” A Thesis Presented to the Graduate School of the University of Florida in Partial Fulfillment of the Requirements for the Degree of Master of Arts in Mass Communication,1998: citeseerx.ist.psu.edu.