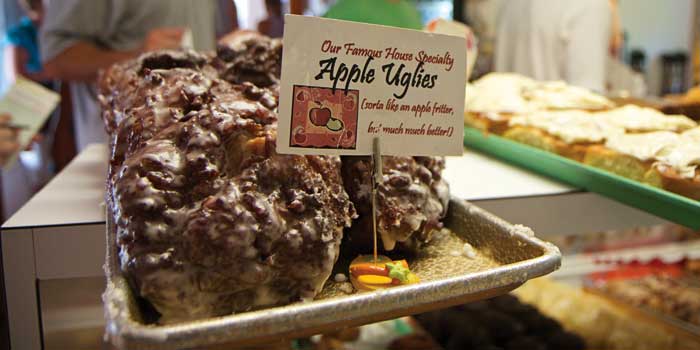 At first glance, you might think there is a platter of mangled rotisserie chickens on the breakfast counter. But you’re looking at the Apple Ugly, a big, deep-fried, cinnamon-laced fritter with apples and glaze that ooze out slowly when you take a bite.

Customers at Buxton’s Orange Blossom Bakery and Cafe know better than to judge the pastry on appearance.

“The uglier and more twisted it is,” owner Charley Pereira says, “the more cracks and crevices it has to soak up the glaze.”

The Orange Blossom began in the 1950s as a six-unit motel. But when Allan and Doris Oakham converted it into a bakery in 1979, a visitor brought Doris a new recipe. Soon, the Orange Blossom legacy took shape in a vat of vegetable oil.

The visitor dropped doughnut dough with apples and cinnamon into a deep-fryer, and Doris Oakham used her son’s drumsticks to turn it. “The more we cooked it, the uglier it got,” she says.

But the Apple Ugly was an instant hit, and customers ate it up, right down to the sticky parts left in the paper bag. They also got a good laugh. A vacationing preacher went home and wrote in his bulletin, “It was the first time I’d ever been asked to stand in the Ugly line.”

“We had two lines,” Oakham explains, one for regular baked goods and one for Apple Uglies. “The Ugly line went clear out the front door,” she says.

Patty Craig of Virginia has vacationed in Buxton since 1996, and she knows you have to be quick to get in that line. The Uglies usually sell out before closing time. One year while training for a half-marathon, Craig got up each morning, ran several miles from the family campsite to the Orange Blossom to pick up breakfast and ran back.

Craig’s daughter Brooke Crawford eventually brought her sweetheart Brandon, now her husband, and finally her in-laws to Hatteras Island to share her childhood experience. When her in-laws rented a house about an hour away from Buxton in 2008, Brooke dragged them all into the car one morning, insisting that they still make it to the bakery. “They all agreed it was worth the trip,” she says.

Now, the Crawfords take their own children to the bakery each year. Their five-month-old didn’t eat anything during the family’s September visit, but his 4-year-old brother did. Luckily, Crawford’s philosophy on Apple Uglies is: “The messier, the better!”

Patty Craig agrees. “It looks deformed,” she says, laughing. “Kind of like a blob, but just delicious. You really have to go there and eat one.”

If you want one, be sure to stand in the Ugly line. It might just make your day prettier.

“When you drink a cup of coffee with one of those things,” Pereira says, “it’s an incredible experience.”

Hannah Mitchell was an intern at Our State magazine during summer 2011.