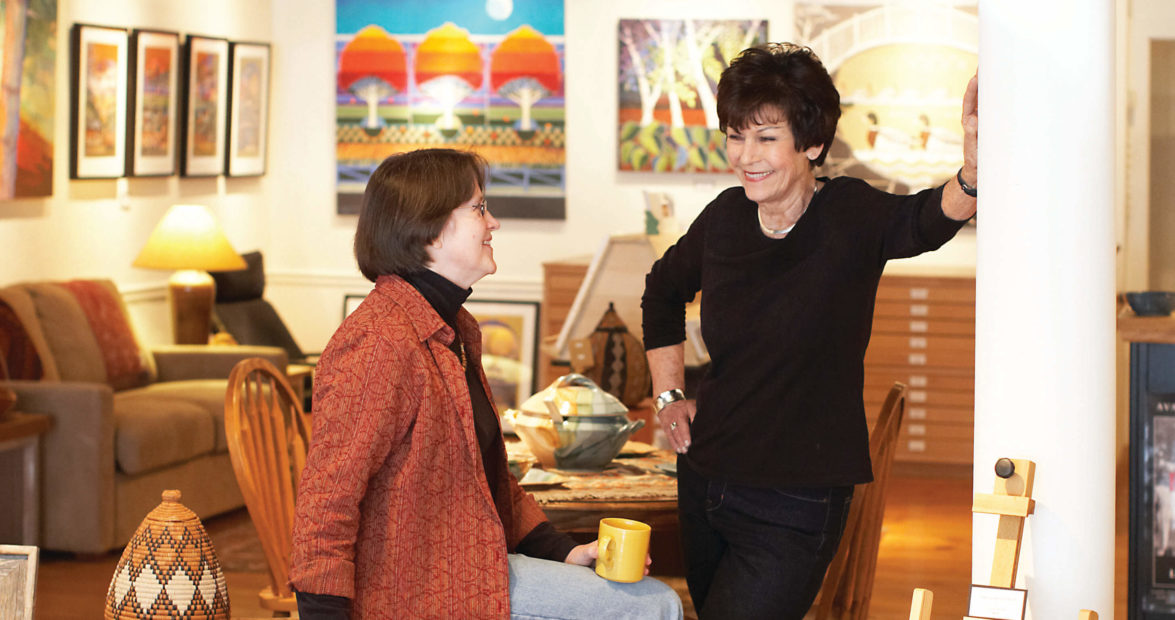 EDITOR’S NOTE: This story was originally published in June 2010.

Lenore De Pree’s hands are not beginner’s hands. The underlying anatomy of tendons and bones shows through the back. Her knuckles are broad and wrinkled, and calluses toughen the sides of her fingers. Purple oil paint stains her fingertips and most of her thumb, the pigment working its way into the whorls of her skin. Literally and figuratively, a passion for painting has soaked into Lenore De Pree.

Paint is often on Joan Bell’s fingertips, too — and on her mind. Even when her hands are clean, her thoughts run to art. Behind the wheel, driving to the gallery, Bell sees the winding roads of western North Carolina as through a viewfinder, composing the landscape into a painting that will soon take shape on her easel.

Bell’s easel sits alongside De Pree’s at Originals Only in West Jefferson. The women believe it’s important to let gallery visitors see their works in progress, so they paint every day in the part of the gallery they’ve set off as a studio. It’s a working gallery, they want you to know, not just a showroom. The smeared palates, the half-empty bottles of linseed, and the canisters of brushes are the proof. Here is a place where art is part of everyday life, mixed in with tables and chairs, and pottery and knitted scarves, which are made by other craftspeople and also for sale.

This gallery is a second home for both women, a place apart from husbands and children. It’s a space they created together when their paths crossed somewhat unexpectedly in Ashe County years ago.

You won’t always find Bell and De Pree in the gallery at the same time, so if you encounter these very different personalities separately, the partnership can be a little hard to grasp. De Pree is an outgoing minister’s wife who has lived in Asia and the Middle East. Bell is laid back, more comfortable talking about the talents of artists throughout Ashe County than about her own considerable gifts.

But just as the gallery is their second home, Bell and De Pree are sisters in the family of North Carolina artisans. Given the same tools as children — Bell picked up oils at age 11; De Pree, at age 6 — they took kindred paths.

A call to travel

De Pree’s grandfather was a Dutch portraitist, and although her parents worked in Kentucky as missionaries and foster parents, her grandmother made sure young Lenore had the chance to explore her potential talent. “A lot of it was just born in me,” De Pree explains. Upon graduating from high school, De Pree traveled north to Wheaton College in Illinois and began studying painting formally with its art faculty. Then, in the first of many instances, she answered a call to travel: she left school to marry and follow her husband, Gordon, to his United States Army chaplain posting in Korea.

Life among the military was comfortable, De Pree says. The Korea posting was up before the couple knew it, and they weren’t ready to head back west. “We realized we really had not experienced Asian life at all,” she explains. Gordon sought out a ministry job that would keep them abroad and found it in Hong Kong.

The couple had the chance to not only experience Asian life, but also to be shaped by it. De Pree was still painting, and her work took a fresh turn inspired by modern Chinese art. “Not the bamboo and birds type,” she notes, but the boldly colored work of the city’s living artists, who followed the rich visual traditions of the Chinese emperors.

Gordon and Lenore brought their family back to the United States when their three children hit their teen years; Gordon also took the opportunity to go back to school (at Columbia University) and retool for work outside of the church.

“Everywhere I went, I applied what I knew about art to the culture I was in,” De Pree says.

The stateside stay lasted only a few years; the family next traveled to Saudi Arabia, and lived there from 1981 to 1990. There, De Pree encountered Persian illustration, in which the artists stretch the scene up to a high horizon, almost like a view into a cutaway dollhouse. They fill every open space with a person, animal, or tree, and add ornate borders as a frame. They aim for the idealized, stylizing their drawing style and flattening their subjects to show as much color and detail as possible.

“Persian art approached illustration in a poetic frame of mind,” De Pree says. “You were drawing poetry about nature.”

She found the work fascinating and inspiring, and its stylistic influence endured after she and Gordon moved again, this time to Ashe County. “We didn’t know a soul,” she says of their move to West Jefferson. Yet this corner of Appalachia resonated with her Kentucky upbringing. “I came here and felt right at home. The moment we got up here, we realized what a creative spirit it had.”

Lenore took to painting local happenings in her Persian-influenced style, from the fiddler’s convention to the Christmas tree harvest. In 1998, she and Gordon opened a gallery on Jefferson Avenue in West Jefferson — one of the first galleries of nearly a dozen that have since popped up in downtown.

At the same time, another couple in Ashe County was mining the area’s creative spirit to earn their livelihood.

A cup of coffee

Joan Bell traces her roots in Ashe County back to her mother’s caffeine addiction. When Bell’s parents became empty nesters, they started traveling the country. “They loved the Blue Ridge Parkway,” Bell says of the road that runs through Ashe County, passing by Glendale Springs where Bell and her husband, Michael, now live.

On one trip, she explains, “My mother needed a cup of coffee.” The travelers hunted for an open cafe but could only find a local who offered his wife’s kitchen as a place to refuel. The hospitality charmed them. So when property came up for sale, Joan’s parents not only relocated to Glendale Springs themselves, they also invited their daughter, son-in-law, and one-year-old grandchild to join them.

Joan and Michael Bell were living in San Francisco, near his family, at the time. “We packed up and moved and never regretted it,” Bell says.

In 1982, the Bells opened Greenhouse Crafts Shop, a craft gallery housed in what used to be the Glendale Springs elementary school building. On a typical spring week now, Joan works five days there, and two days at Originals Only. She says this seven-day-a-week schedule never leaves her feeling run down. “Every drive from home to town is a wonderful inspiration,” Bell says. “The river changes constantly, the clouds and the reflections in the water.”

Bell finished her formal studies in art at Oberlin College in Ohio. However, she found classical training a bit dull. “Oil still-lifes seemed so easy to me, it seemed like it was cheating,” she says. So, after college she turned to the harder challenge of watercolor, and she stuck with it for 25 years.

In the early 2000s, Bell joined a small group of fellow artists who held regular meetings to discuss their new work. In this group, she met De Pree, who had just sold her first West Jefferson gallery and was about to start another. She asked Bell to share in the venture.

Originals Only, started in 2005, was the next chapter for Bell as a businesswoman and as an artist. “It was inspiring for me because I admired Lenore’s use of color, her boldness,” she says. Watercolors offer limited pigment intensity; the technique prevented Bell from painting aggressively. De Pree didn’t have to tell her friend what she was already feeling: It was time to come back to oils.

So, here at Originals Only are two easels, side by side. On one, you’ll see De Pree’s current work: large-scale oil paintings of animals and people in harmonized colors. On the other, you’ll see an oil landscape of Ashe County by Bell.

Bell’s pieces are popular with patrons looking for a Blue Ridge souvenir, or for something to hang in a vacation cottage. De Pree’s work might appeal more to contemporary tastes. The women don’t bristle at comparisons between their styles.