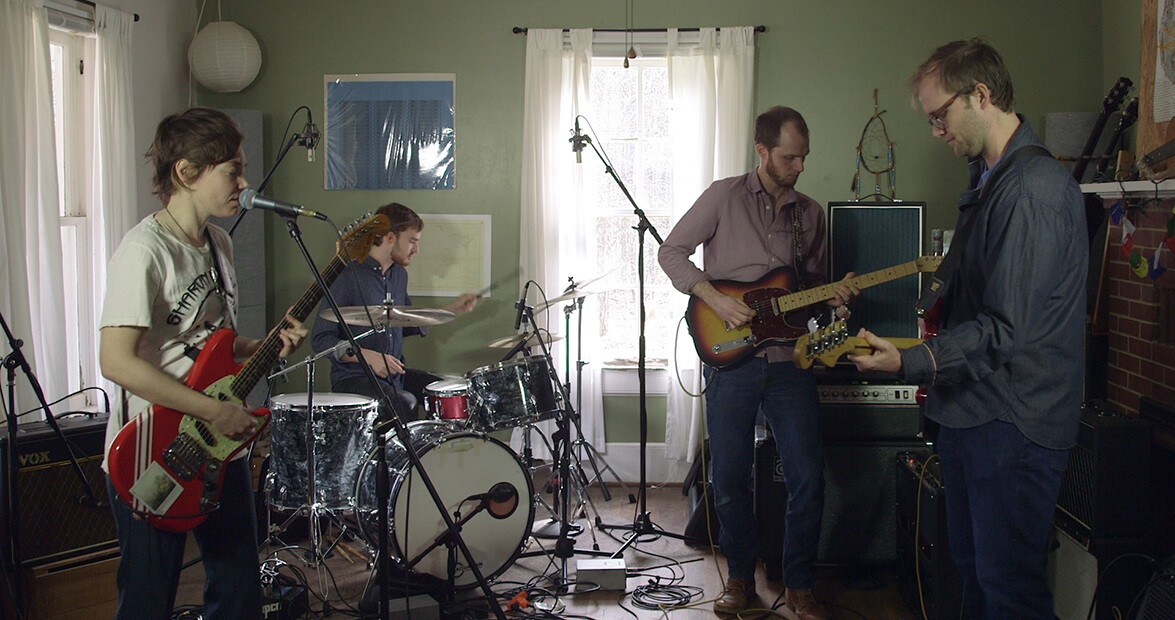 Pulling up to the small, secluded house that Heather McEntire calls home and Mount Moriah calls its studio, we had a feeling that we were in the right place, despite being off the beaten path. Just outside of Durham, we had driven down a dirt road and around a pond to find the place, and could smell the wood stove burning the second we stepped out of the car. The old front porch of the cabin was covered in comfortable-looking furniture, a few potted cacti, and instruments. Yep, a band was definitely near.

Mount Moriah is a North Carolina “country, Southern-rock” band, in the words of Jenks Miller, the band’s lead guitarist. Miller is an original member of Mount Moriah along with McEntire, the lead vocalist and guitarist. McEntire and Miller have been friends and band mates for years and were later joined by Casey Toll (bass, keys) six years ago. More recently, about six months ago, Daniel Faust joined as a drummer. They performed two songs for us: “Baby Blue” and “Calvander,” which are off their newest album, How To Dance. The album was released on February 26, and the band will tour the country from March 11 to April 27.

Enjoy the band’s performance below, and continue on for Our State’s interview with Mount Moriah about its history, new album, and what it means to be a young, progressive band in North Carolina.

Q: How long have you all known each other and been playing music together?

McEntire: I’ve known Jenks the longest. 2005? 11 years? We met at a house show in Chapel Hill, and then worked together in a record store. Then we were roommates, then he proposed – no, just kidding [laughter]. Then we started a pop band together called Un Deux Trois, which was short-lived.

Miller: Then we shifted gears, started Mount Moriah, made a record in 2010 – but when we were about to go on tour for that record, our rhythm section quit. So we hired Casey in the fall of 2010. I knew Casey because I was working on campus at UNC at the time, and Casey worked in the parking deck that I would park in. He noticed a drum set in the back of my car one day, and he was like, “Oh, you play drums? I play bluegrass.” And we had already booked this tour, so we had to find people really quickly. So we thought, “Who do we know that’s good?” And I was like, “Oh! The guy from the parking garage!” [laughter] So we made a record with Casey, went on the road for that record, with a different drummer from Daniel. Our old drummer Terry, who is on this most recent album, went back to school. And that’s when Daniel came in. Daniel’s the newest.

McEntire: The newest! The youngest! The cutest! The freshest! But we hope he’ll stay forever.

Q: North Carolina plays a big role in your songwriting and your sound. What kind of role would you say it plays in your music?

McEntire: It’s hard to be subjective, but I mean, we all grew up in North Carolina, and it’s just in our bones, you know? The pace, and the weird political tensions, and the passion of religion and all that. But I guess the first thing that comes to my mind is that I lyrically write a lot about place, and it’s just an amazing state to explore. The coast and the mountains, it’s awesome. I’ve never been able to leave.

Q: How would you say your music has evolved from your first, self-titled album in 2011 to your newest album, How To Dance?

Miller: We’ve gotten louder, I think. When we first started, both Heather and I had these other bands that were pretty active at the time, much louder and more aggressive bands. Mount Moriah was created to be a more restrained, quieter vehicle at first. And then over time as we played more shows, we felt that louder stuff creeping back in. So now it’s not nearly as reserved as it once was. The first big tour we went on was with the Indigo Girls, and it made sense at the time, sound-wise. I feel like it wouldn’t necessarily make sense now, because we’re so much louder.

Q: Since you are going on tour again soon, what are you going to miss most while you’re gone?

McEntire: Well, I’ll get called out if I don’t say that I’ll miss my girlfriend. [laughter] But I love my home, and my porch, and being out in the woods. I think I’ll miss the quiet solitude. What about y’all?

Toll: I think that personal space is the hardest thing to come by.

Faust: And you know, Cook Out. They don’t have that kind of fast food everywhere.

Q: What’s your favorite venue to play in North Carolina?

Miller: The Pinhook kind of feels like our home venue, in Durham. But there are a lot of venues that we enjoy playing. We play The Grey Eagle a bunch in Asheville.

Miller: Oh yeah, the Cradle, that’s true. It feels like there’s a legacy associated with Cat’s Cradle, so it’s very cool to play there.

Q: What else do you think our readers would like to learn about you?

Miller: One thing about the band that I feel is unique is that we’re a country, Southern-rock band, but we’re also very progressive and we’ve taken some pretty public stances on current events and current issues, including Amendment One. That was a big victory. We lost the battle, but we won the war. So, there seems to be a lot there in terms of being a creative person, being in the media at this time and in this state. There seems to be a lot of political energy being invested in this state right now. So to be a band from North Carolina, you have to engage with that in some way.

Our record was premiered in The Wall Street Journal. It was cool, but at the same time, The Wall Street Journal is a very conservative paper. There was a lot of discussion about what it means to be a progressive band in a Southern state and then to be working with a media outlet like The Wall Street Journal. Those issues of identity feel very current. We feel like there’s a complexity there, and we feel like it’s important to acknowledge and to work with, rather than try to ignore. [It’s a matter of] interacting with that complexity, finding meaning there somehow, and being able to be secure in who you are and what your beliefs are, even when you’re constantly being pulled in different directions.

McEntire: But also maintaining and developing our family lives – trying to relate to them, as well as conservatives, and other generations.

Miller: That’s true. Our parents’ generation had a very different experience with the South. And we inhabit the musical form that, on the surface, is very recognizable to them. So they might say, “we love that kind of country music,” but then the substance of it is so different. That’s the complexity that we try to engage with. It doesn’t always seem to come across, because it’s hard to articulate, especially if you’re not from the South.