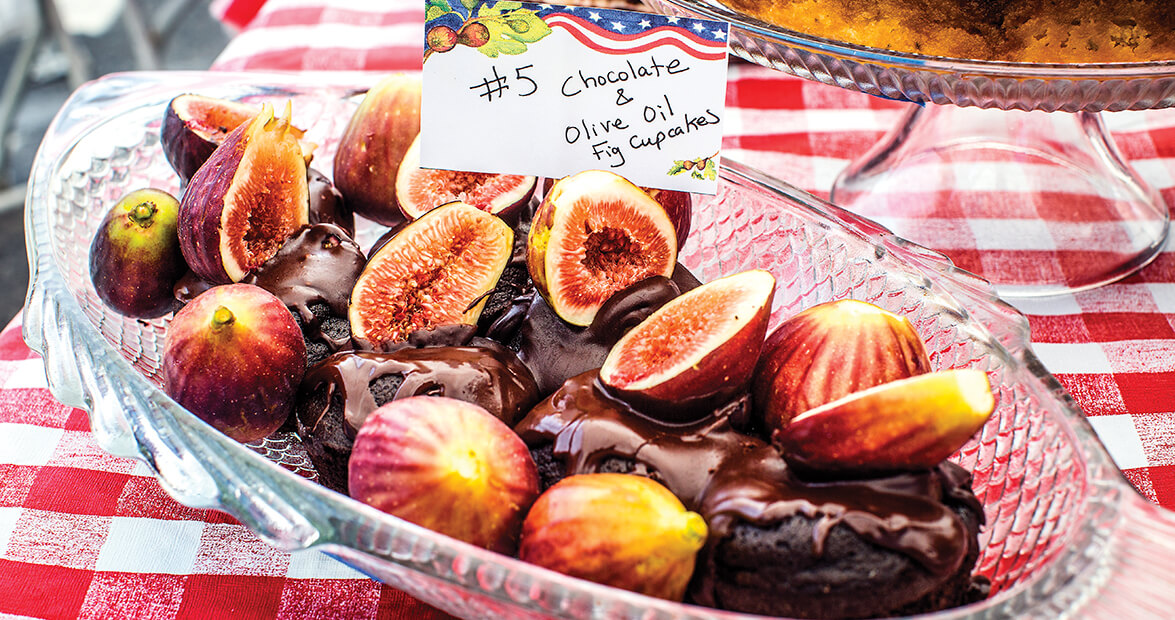 What makes figs special among the canon of Southern fruits is their fleetingness.

It’s that month or so of fevered fig picking. It’s you against the birds. It’s the daily visit to the fig bushes; climbing ladders to reach the highest branches; picking only those orbs bursting with fissures, attracting wasps, and seeping with a drop or two of juice. All that effort for the sweet, chewy, pleasantly seedy taste of fresh figs.

Picking is followed by preserving: making fig jam and fig preserves, or canning whole figs in syrup. Those jars extend figs from a summer treat to a winter delight, when preserves are slathered on biscuits, spread between two slices of bread, or folded into batter to make Ocracoke fig cake.

No other Southern community celebrates the fig more than the barrier island where the moist spice cake was invented. Each August, Ocracoke holds a fig festival in the community square, just off Silver Lake Harbor. Tables are draped with red-and-white-checkered cloths and laden with entries for an annual cake bake-off. Longtime islanders sell preserves, syrups, cakes, and even cake kits.

You might hear Chester Lynn, Ocracoke’s fig expert, give a talk about the 14 fig varieties that grow on the island, including Brown Turkey, Celeste, Blanche Howard, Portsmouth Island, Springer’s Point, and Pound Fig.

Figs are native to the Middle East and Mediterranean. Lynn, a 10th-generation Ocracoker, says letters between North Carolina business partners John Gray Blount and John Wallace, who co-owned Shell Castle, a key 18th-century port near Ocracoke Inlet, show figs were on the island by the 1790s. By the time Lynn was growing up, he remembers “the smell of figs cooking in the yard,” and those trees being vital to islanders’ self-sufficiency.

“There was a time they had to do this because they couldn’t go to the store and get everything,” Lynn says.

That’s exactly what led the late Margaret Garrish to invent the Ocracoke fig cake (recipe below).

Garrish was a homemaker and teacher’s aide who had to feed four hungry children and a husband with a sweet tooth. Her daughter Melissa recalls that her mother often made dessert. Sometime in the 1960s, Garrish substituted chopped, preserved whole figs in a date cake recipe. As Melissa explains: “Living on Ocracoke made you an experimental cook.”

The fig cake recipe spread across the island via PTA meetings and United Methodist Church ladies’ dinners. And now, that cake is an integral part of the island’s festival. Last year, Melissa and her siblings judged the traditional category in the cake contest, with entries based on their mother’s recipe.

Each slice honored the precious fig, and an island’s identity, preserved.

From Ruth Toth, former owner of Cafe Atlantic restaurant on Ocracoke. Her cake won first place at the 2015 Ocracoke Fig Festival. Toth published a cookbook, Cafe Atlantic Cookbook, which is sold at Books to Be Red, Ocracoke Preservation Museum, and The Village Craftsmen, all in Ocracoke.

Whisk eggs in a medium bowl. Stir in sugar and oil until fully combined. Set aside.

Sift dry ingredients together in a large bowl. Stir egg mixture into flour mixture, alternating with buttermilk and vanilla. Fold in figs and nuts. Bake for about 1 hour in a tube or Bundt pan but check at 40 minutes; the cake is done when a toothpick inserted in the center comes out clean. (The cake will take less time in 9 x 13-inch baking pan.)

Let cool. If using a tube or Bundt pan, remove cake from pan, slice, and serve.