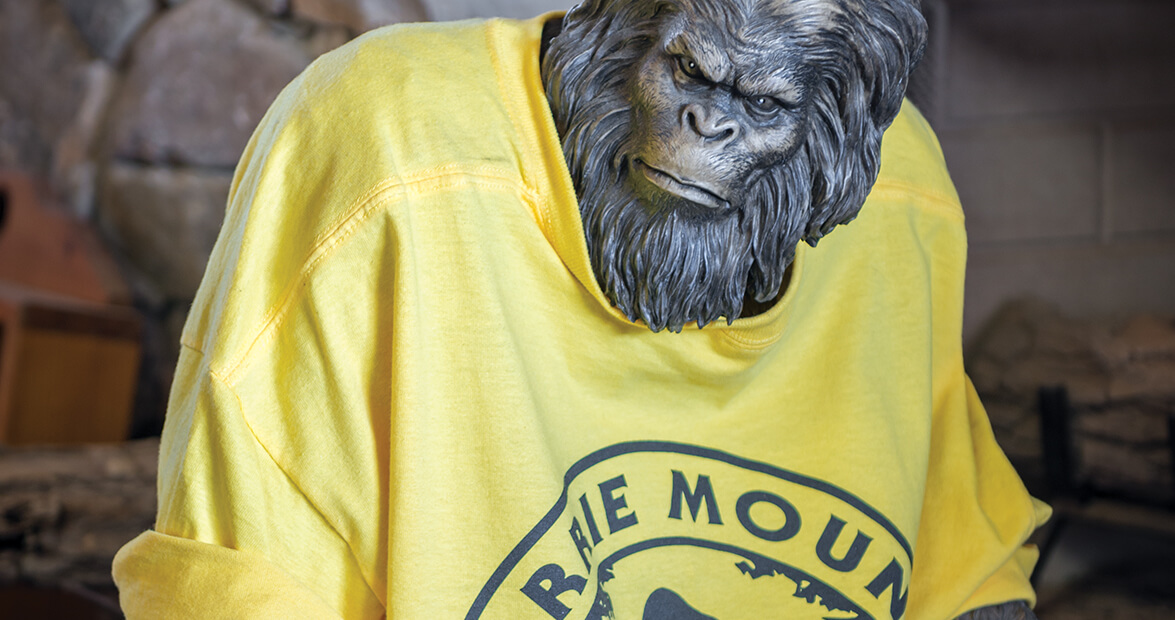 1. In 1967, Philip Morris of Charlotte got a call from a guy in California, asking him if he could buy a gorilla costume. Morris, a magician at heart, had gotten into the costume business several years before, making lifelike gorilla costumes in his home on Kistler Avenue. The suit wasn’t cheap — $435 at the time — but the guy said he wanted to use it for a prank. So Morris sold him the costume, and months later, the same man suddenly happened to have a clear, shockingly real-looking 16-millimeter filmstrip of Bigfoot walking through the Northern California mountains. Morris, whose family still runs Morris Costumes in Charlotte, came forward years later to explain that the suit was his, and that the ’squatch was fake.

2. Some years ago, when I worked in local television news, I was placed on the Bigfoot beat. It started in 2010, when a man in Casar said he saw a local version of the creature, named Ben Knobby Knob, hassling his dogs. “He had beautiful hair,” the man told a reporter, before saying that, to make Knobby leave, he “rough talked” him, then picked up a long stick and held it menacingly while saying “git” over and over.

3. According to the Bigfoot Field Researchers Organization (or BFRO; yes, it’s a real organization), there have been 96 reported Bigfoot sightings in North Carolina. As far east as Havelock, and as far west as Franklin. They’re ranked as Class A sightings (I saw it!), Class B (I saw it?), and Class C (This guy I know saw it).

4. In case you were worried that Bigfoot researchers lack credibility, many of them are quick to disavow most sightings as fakes. Once, I talked to an expert who called a five-second clip of Sasquatch crossing the road in Rutherford County an obvious hoax. It was blurry and too humanlike. These sorts of videos surface so often that the expert had a name for them: Blobsquatches.

5. According to the BFRO, the North Carolina county with the most Bigfoot sightings — 13 — is Montgomery. Most recently, in October 2015, a camper told the organization that he was scared half to death by a noise “deeper than a lion’s roar and as long as a human’s sigh.” The guy shared a common trait with a lot of other people who have made reports: They didn’t believe before. They do now.

6. Out in Montgomery County’s Uwharrie Mountains, the Eldorado Outpost has capitalized on the sightings, and the store and café is the jumping-off point for a lot of people looking for Sasquatch. Last year, the owner, Marion Owen, told me Bigfoot is still a draw. “This is hangin’ on with us,” she said. “I don’t know why.”

7. Well, Marion, I have one theory. It could be that maybe, in a rush to try and explain the unexplainable, it’s easy to distill it all into one singular being: Bigfoot. It’s the embodiment of everything we can hear but not see in the woods. Rustling leaves. A stick cracking in the night. A growl that doesn’t match any animal you’ve heard before. Sure, these things are scary, but it’s, I dunno, a little more comfortable, and maybe more fun, to say it’s Sasquatch. It’s just one way we can make the vast, unknowable parts of our world a little more knowable.

8. Sasquatch smells bad. Or so says this guy I know.