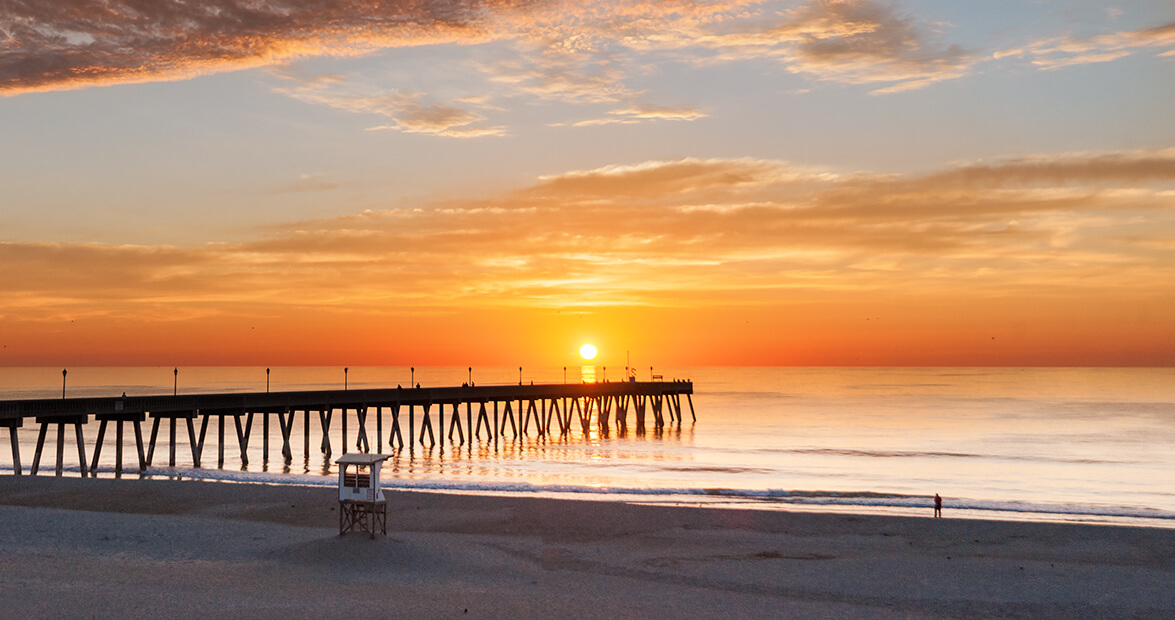 1. Last November, the guy next door to my in-laws’ place in Carolina Beach set up way too many Christmas lights and had them flash, precisely on cue, to the beat of some Trans-Siberian Orchestra song. It was intense. Not only had the neighbor spent hours hanging the lights and then hand-programmed them to pulse with the music, but he’d also done this on a nearly pitch-black street, and I was worried that the display might confuse passing aircraft. Except for us and him, it felt like there was nobody around for miles. I stood in the road for a good half-hour, just watching, not worrying once about getting in the way of an oncoming car.

2. Contrast that with a moment this past summer, when a cashier at a Carolina Beach grocery store, a bit flustered, her scanner beeping constantly, her checkout line getting longer, took a deep breath and wondered aloud how long she had until September.

3. Oh, fall. The big exhale. After Labor Day, the population in Kure Beach deflates from 5,500 down to just more than 2,000. In Wrightsville Beach, it drops from around 25,000 to a tenth of that. The rental homes close their shutters. The traffic winnows to a trickle. Hotels empty. You get to explore a ghost town that, thankfully, still has power and running water.

4. Want to go out to eat? Find the one restaurant that’s still open and pig out! Nobody will be there to judge you. Need to clear your head? Walk on the sand. Maybe you’ll pass three people, who will not speak to you, because they, too, are interested in solitude. If you see me out there in late fall or winter, know that I am friendly, but do not talk to me.
Give me a few months.

5. If you are on the pier, you are there to fish, not to look at the ocean and gaze and think why? The off-season months are practical ones.

6. In a way, you need this. The beach is supposed to be a place to unwind, but the rigmarole of it all — the sticky sunscreen, the sand in unfortunate places, the heat, the search for a place to put down your blanket, the long lines for ice cream — all of it can be, frankly, stressful. Oddly enough, the same place, free of all these things, is eerily peaceful. Everything is wide open and quiet. Off-season is, sometimes, better than the summer. If something’s making your temperature rise, just walk outside and cool off.

7. Also, you can get a weekend place for next to nothin’.

8. From the beginning of October until the end of March, it is legal to have a dog on Kure Beach, so we bring the long leash and the dog just runs in a large orbit, up onto dunes, sniffing, sniffing, sniffing, and then down toward the water, until oh no, wave, no no no. We play this game — dune, sniff, oh no — until we get to the pier, a mile or so down Kure Beach, and turn back, at which time the dog has sniffed everything and discovered nothing, yet looks completely satisfied, which, really, if you’re here now, is exactly how you’re feeling, too.