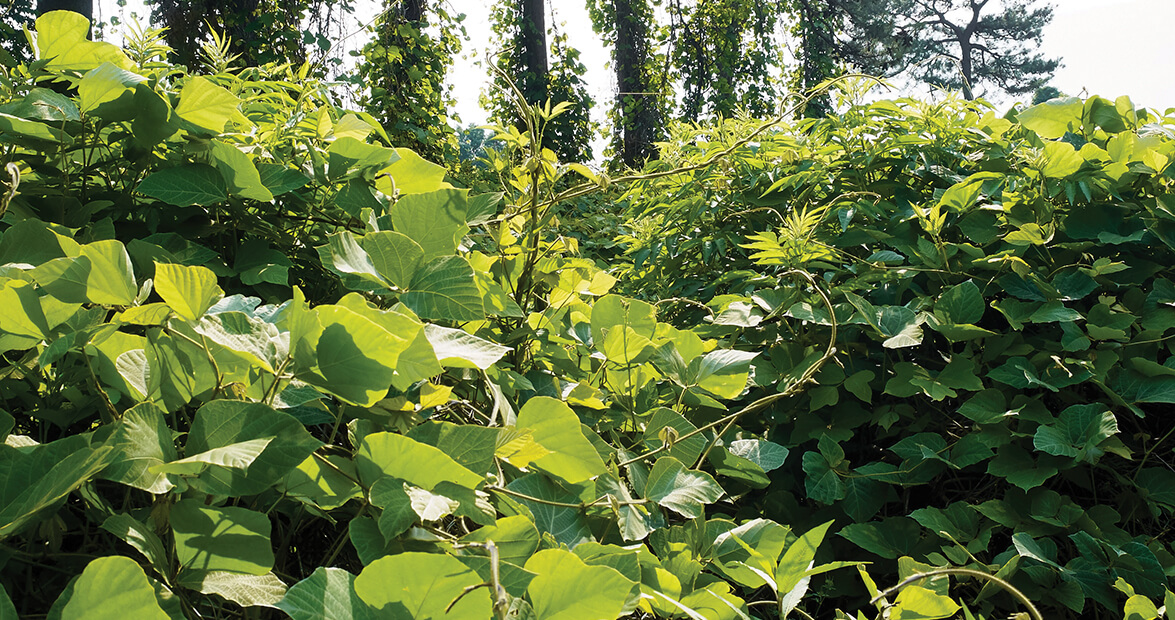 1. Kudzu is a monstrous, hideous, all-consuming vine, and it must be stopped. I know it has pretty purple flowers and broad leaves, and smells sorta grapey. No. Don’t say nice things about it. I bought a house last year, and the property included a deep ravine, and I initially thought, hey, cool — free ravine. But the ravine was filled with kudzu, which had already swallowed a 30-foot-tall tree and was climbing up the hill toward the house, presumably to kill us all.

2. I had already written a longer, more vile screed about this in my head. I would have scrawled it on a crinkled legal pad and handed it to my editor with a large, all-caps note written in red Sharpie at the top: MAKE NO CHANGES. The problem is that it was entirely made up of curse words, so I had to start over.

3. My father, who’s from Ohio, saw Kudzu Ravine for the first time and immediately told everyone he knew about it. You ever heard of this kudzu stuff? Man oh man. He vowed to take it out. We have a plan, he’d say, even though we had no plan.

4. Kudzu was introduced to this country at the 1876 Centennial Exposition (World’s Fair) in Philadelphia, and the federal government encouraged its planting in the 1930s and ’40s as a way to combat the soil erosion that was contributing to the Dust Bowl. Oopsie. A single kudzu crown can produce 30 vines and can grow a foot a day, outward 60 feet or upward 100 feet — to the top of a tree. The root can go down 12 feet into the soil and weigh up to 400 pounds. I throw all of these numbers at you to emphasize this point: If you lie down long enough in a field where kudzu is growing, the green Borg will assimilate you. Resistance is futile.

5. Counterpoint! Last September, Smithsonian magazine ran a long story about how this stuff isn’t really the vine that ate the South, because estimates of how much land it’s consumed have been greatly exaggerated. We just get the impression that kudzu is everywhere because it grows fastest in open fields, in ravines, and on roadsides, where we, the lazy, take real and mental pictures of it from moving cars.

6. I tried mowing it back. The kudzu stopped the blade and wrapped itself around the driveshaft. I also tried, stupidly, a weed whacker (It. Did. Nothing.), and a new Cub Cadet riding mower that got stuck after its wheels spun futilely in a spot that was too steep. I worked for hours on the hillside, nearly passing out from pushing heavy machinery around on a slope in the hot sun. The result? I maybe — maybe — pushed the kudzu horde back three feet.

7. A neighbor told me that his kids like hunting down kudzu crowns, drilling into the roots, and pouring diesel into the holes to kill the vine, which sure sounds illegal. But, anyway, they’re available for hire.

8. You know what works? Goats. They work cheap and eat acres and acres of kudzu. There are companies you can call to bring goats right to your yard for an invasive plant buffet. Which sounds good to me, because after a year of mowing, hacking, and chopping kudzu, I seem to have lost my appetite for anger.