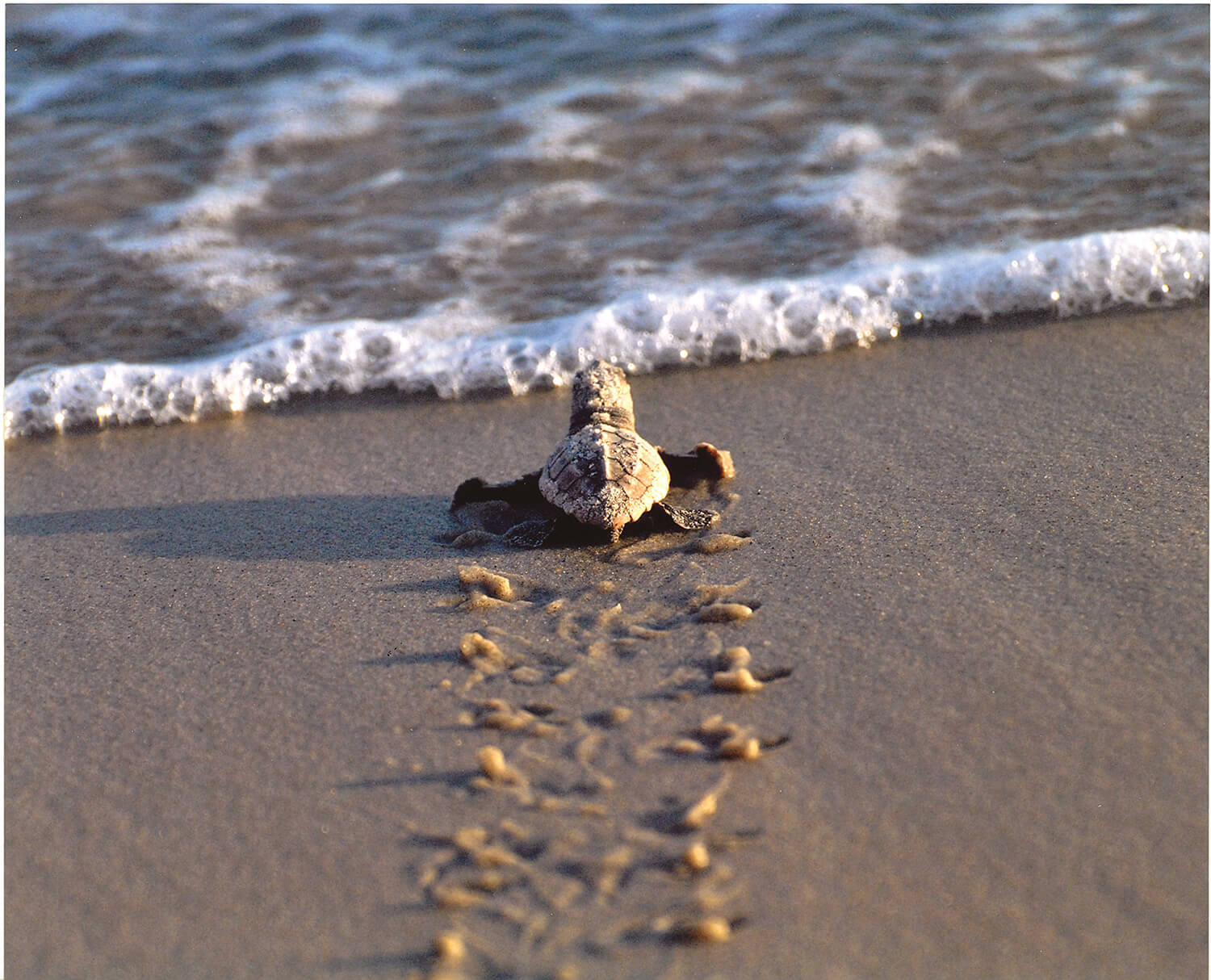 In this monthly online series, we ask the experts to go in-depth on some of our favorite topics from the magazine.

Sea turtles have long felt at home in the warm waters and on the sandy beaches along North Carolina’s coast: Out of seven recognized species in the world, five of them can be spotted in our waters, and our state provides more than 300 miles of nesting grounds to turtles who return each year to lay their eggs. But as an endangered species, these ancient marine animals need us to look beyond their wild beauty and give them our support.

“They go into this big ocean as tiny little creatures, just weighing a matter of ounces, to face the world and all that it has to throw at them,” says Jean Beasley, executive director of the Karen Beasley Sea Turtle Rescue and Rehabilitation Center. “It’s always a very touching moment for people who have the opportunity to see it.”

We chatted with Beasley and three other experts — Deb Allen, island coordinator of the Ocean Isle Beach Sea Turtle Protection Organization; Chris Shank, executive director of the Bald Head Island Conservancy (who had input from Paul Hillbrand, the conservancy’s sea turtle biologist) — to find out what makes sea turtles so special, and asked them to share their best advice for keeping turtles safe.

What is the No. 1 thing people should know about sea turtles?

Deb Allen: They dig the dark! Lighting near the shore, like the flash from your cell phone camera, will disorient sea turtle mothers and their hatchlings. They’re looking for the glow of the moon, the twinkling of the stars, or the effervescence of the waves to find their way to the sea.

Jean Beasley: They are charismatic, wonderful, ancient creatures that deserve a place in our hearts. They are an index species — one that tells us the conditions of the ocean and about the survival of endangered species, and they have a lot to say to us about that.

Chris Shank: Sea turtles are not just cute and charismatic creatures that visit our beaches during the summer months; they also function as ecosystem engineers. Important ecological roles for these marine reptiles include green sea turtles helping maintain healthy seagrass beds through grazing, and hawksbill turtles balancing the competition for growing space among corals and sponges.

It sounds like there’s no better animal to obsess over! What else makes sea turtles so special?

Jean Beasley: They are terrifically engaging animals. They look you in the eye and there is communication. I love to watch the children who visit our facility standing very close to a turtle that may weigh 300 pounds, who is looking back at them, and you can almost see the connection.

Deb Allen: They’re just precious, number one. It’s like a puppy or a kitten: Sea turtles make you fall in love with them as soon as you see one — and you don’t usually see just one; you typically see 50 or 60. They are an endangered species, and our world needs to maintain a balance of all wildlife.

Chris Shank: Sea turtles are incredibly resilient. Their mode of reproduction forces them to fight for space at our beaches and requires them to dodge a constant onslaught of obstacles throughout their lives.

What types of sea turtles might crawl onto our beaches?

Jean Beasley: There are seven recognized species in the world, and five of those species travel along our North Carolina coast: green turtles, hawksbills, Kemp’s ridleys, leatherbacks, and loggerheads. The most important turtle in North Carolina is the loggerhead. It is, more or less, the symbol of our coast. Whenever you see a billboard, article, or restaurant with a turtle in their advertising, it’s going to be the loggerhead.

Where and when can we see them in North Carolina?

Jean Beasley: Along the entire coast of North Carolina, there are projects of volunteers, and we all basically do the same thing: We provide information, walk the beaches in search of turtle nests, and have visitors sit with us near the nest, using that opportunity to provide education about the sea turtles. Most of the time when people see a turtle nesting, they’re walking on the beach and one just happens to be there. It is one of the most wonderful and exhilarating experiences that anyone can have. We usually start walking the beach on May 1. It’s like a bell curve: It starts out slowly, and then it builds from about the third week in June through mid-July, which is the peak period.

Chris Shank: The nesting season in North Carolina runs from May to October, with nests laid primarily from May through July and hatching season from August through October. Nearly all nest layings and hatchings occur at night, with the best viewing conditions being a calm night with a full moon lighting up the beach. It is important to remember that these turtles are protected under the Endangered Species Act and should be observed only at a distance.

Let’s talk danger. What are the major threats that sea turtles face off our coast?

Jean Beasley: We have lots of discarded trash here that’s drifting about in the ocean, which can be detrimental for the sea turtles. With fishing — and no one loves North Carolina seafood like I do — there are regulations in place to help the turtles, from monitoring boat traffic to encouraging people to report injured sea turtles that they may find. It’s all about awareness. If people know that they can help, usually they will.

Chris Shank: One major threat along the North Carolina coast is light pollution. White light from homes and businesses along the immediate coast, or even at a distance beyond the dune line, attracts hatchlings as they emerge from nests, causing them to become disoriented and venture toward the light instead of toward the ocean.

We want to defend our turtles! Are there simple lifestyle changes that we can make to lessen our impact?

Jean Beasley: Yes, there are! On vacation, people want to turn on all of their lights, and when they do, they’re missing all of the beauty of the beach — and it also interferes with the sea turtles’ nesting pattern. The little hatchlings will follow the brightest light and end up in the dunes or over on the road, so we have these sayings: “Lights out for sea turtles!” and, “Love the dark, love the turtles.” Turning out the lights helps you to enjoy the beauty of the ocean, and it also allows the turtles to go about their natural process.

Deb Allen: Reduce plastic use! You can buy toothpaste in a little glass jar so that your toothpaste tubes don’t end up in the trash or recycling. You can also use bamboo toothbrushes, reusable shopping bags, and bar shampoo and conditioner — those are simple lifestyle changes that make a huge impact on our wildlife.

Chris Shank: A great way to protect sea turtles is by volunteering with or donating to your local sea turtle protection program. These organizations are on the front line of the science aimed at understanding the population dynamics of North Carolina sea turtles, as well as serving as primary protectors.