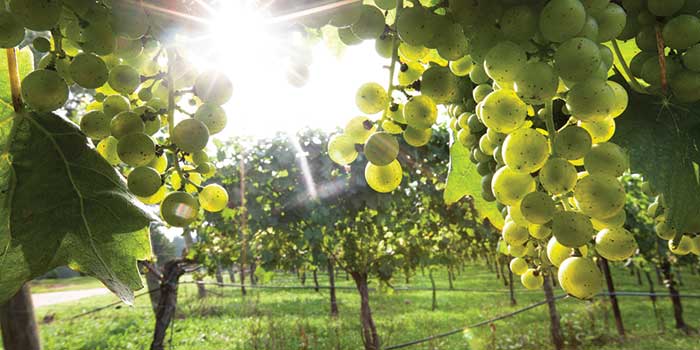 It’s a showery Saturday, and visitors to the tasting room at Overmountain Vineyards in Tryon are whiling away the afternoon on the covered patio. Rain thrums on the roof as they gaze out over their wineglasses at the vineyard. Proprietress Lita Lilly welcomes guests; her elder daughter, Sofia, pours tastes; and the Lillys’ sociable, spirited Great Dane, Jackson, plays host, making his rounds outside the tasting room. Everything here feels clean and comfortable, languorous and effortless.

Making it look this easy is hard, although you can’t tell — especially since the winemaker is nowhere in sight. Frank Lilly, Lita’s husband (and Sofia’s father), is out in the vineyards on the other side of the property, checking his grapes after another downpour. While visitors sit sipping the current vintage, Overmountain’s fourth, Frank is thinking about what the weather means for the fifth.

Overmountain is a family affair and a labor of love, but it is also a love of labor. “I’ve never seen anyone work so hard,” Lita says, recalling Frank’s years of planting vines; getting a degree from Surry Community College’s Enology and Viticulture program (in Dobson); learning from his mentor, Lee Griffin, at nearby Rockhouse Vineyards; experimenting with grapes; reading every wine-making book he could find; and studying the Polk County terroir — the geography, geology, and climate of the land.

Preparation for Overmountain’s first vintage, released in 2010, took more than a decade. The vines are well established now, but the labor is constant. This is difficult, demanding, year-round work. “Making wine is farming, plain and simple,” Lita says, “and Frank’s a farmer at heart.”

A farmer must learn what grows best on his land. Frank had considered planting raspberries or Christmas trees here before he seized on the idea
(inspired by Griffin at Rockhouse) to grow grapes — and not just any grapes. The vines visible from here are red Bordeaux varietals, so it’s a surprise to hear Frank say, “If I could do it over again, I’d tear out all my Bordeaux reds and plant only whites.”

He does make some red wine, and it’s in much demand by his patrons, but he isn’t devastated that this summer’s copious rains might necessitate
turning all the red grapes into rosé for this vintage. Most of the red grapes grown in the vineyards don’t even make it into wines made at Overmountain. Instead, the fruit is sold to the Biltmore Estate and is used in their wines.

“Our winery is designed to make white wine,” he says, as he gives a tour of the spotless cold-fermentation network of gleaming steel tanks, all connected to a chiller. Frank makes a juicy, tropical, well-balanced chardonnay, and a viognier as well. He buys the grapes for these wines from nearby growers in Polk County. He doesn’t grow them himself because much of his own land is devoted to an obscure but venerable white grape called petit manseng. He believes this sturdy grape is ideally suited to Polk Country.

Petit manseng is rare, usually grown only in the Jurançon region of southwest France. There, in the foothills of the Pyrenees Mountains, the grape makes luscious, intense wines, both dry and sweet. The novelist Colette, smitten, called Jurançon wine one of les grands séducteurs. Frank is among the adorers, but his own petit manseng wine eludes many fans: He produces so little (and lost most of this year’s crop, sadly, to an April freeze) that there isn’t any for the tasting room, let alone cases for sale.

Despite the grape’s scarcity, and the frosts, Frank insists that the future of white wine in the foothills belongs to petit manseng. It’s a radical claim, but radical claims are, like wine, part of Polk County — indeed, the revolutionary spirit blazes a path right through the Lillys’ property, which includes a stretch of the storied Overmountain Trail, the route American revolutionaries took in 1780 to Kings Mountain, where they won a key battle over British loyalists.

When the Lillys established their winery, they not only took the name of the Overmountain Men (and called their cabernet Revolutionary Red), but also they inherited the revolutionary spirit. It shows in the winery’s sense of independence and self-determination, from Frank’s unique zeal for petit manseng to the absence of Overmountain Vineyards’ wines on retail shelves. It is the tendency of business enterprise to expand, but the Lillys, despite a plan to increase production of this vintage from 1,800 bottles to 3,000, want to stay small — they want to keep their wine at home on the land they love and farm. To get the fullest experience of Overmountain’s wines, you must make the trip to the place that bears them, where you’ll feel welcomed by the Lilly family and the habitués of their vineyard.

“Wine brings people together, from all walks of life,” Lita says, as the last of Saturday’s visitors pull away. It’s been a long afternoon, but she’s unfailingly warm and hospitable, offering visitors another glass of wine. It’s remarkable how quickly you begin to feel at home at Overmountain. Lita’s words are a reminder that terroir isn’t only about a wine’s sense of place. It’s about a person’s sense of place, too.