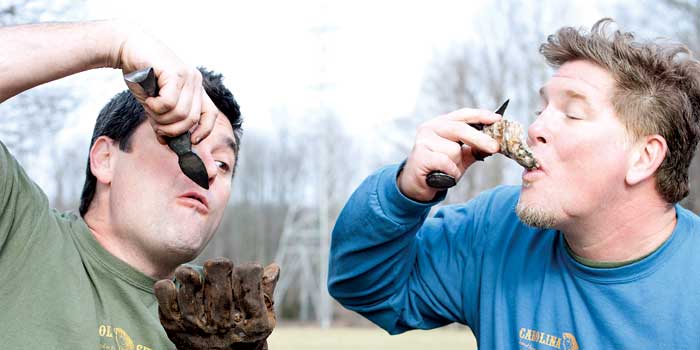 Insert the knife, twist, and pop.

The knife you choose to open your oyster says a lot about you. A cheap, plastic-handled version works for the occasional oyster eater. A screwdriver will do in a pinch. But eastern North Carolinians who gather around long tables in backyards for weekend oyster roasts depend on a knife hand-forged in their home state.

Michael Waller and Kirk Davis grew up in Kinston. They first attended school together at Banks Elementary, and they quickly became best friends. They stayed together through college at East Carolina University. They graduated with sculpture degrees and headed in different directions to make money manipulating metal.

Waller, 40, now lives on six acres in Hillsborough. Davis, 41, lives on the coast in Morehead City.

The men have 180 miles between them, but they bridge the distance with their new business — Carolina Shuckers.

Waller works in a 400-square-foot squeeze of a shop that was once a country store, and Davis has 1,800 square feet of space. Waller starts with a five-inch, rectangular block of steel. Davis recycles old railroad spikes. But both men put 30 minutes of labor into each ornate oyster knife.

Waller grabs a pair of heavy tongs from a bucket of water and fetches a block of steel from a 2,000-degree forge. The steel glows orange as he places it under a high-powered hammer.

Waller works the contraption with a foot pedal. With each tap, the hammer’s belt tightens — like the clutch on a car — and the hammer jerks up and down. It delivers 50 pounds of force with every thump. The sound of metal hitting metal rings off the cinder-block walls, and Waller’s whole body vibrates as he flattens out the blade.

He works quickly. His movements are practiced and determined.

“It’s a race between that color and it dulling out,” he says.

The metal grays. Waller thrusts it back into the forge. The metal glows again. Waller snatches it back out.

He secures it in a vise and twists the metal into a curved handle — a Carolina Shuckers signature. The scars covering his arms remind him not to get too close.

Once the knife cools, Waller grinds and shapes the blade. He places it back into the forge. This last heat ensures stability; a heat-treated blade won’t bend under the pressure of an oyster shell. These knives are made to work with, not look at.

Every Carolina Shuckers oyster knife bears a name etched onto the back — Michael Waller or Kirk Davis. The knives weigh about a pound apiece and cost $40. These fancy, heavy knives aren’t crafted for efficiency. The men don’t expect to see their knives in oyster-processing facilities.

People who purchase Carolina Shuckers knives understand what Waller and Davis call oyster culture. They don’t want a jar of naked mollusks off the grocery store shelf. They want a long table covered with muddy shells. They want to pull out an oyster knife crafted by two eastern North Carolina natives who put 30 minutes into a tool designed for a three-second task.

Leah Hughes is an associate editor at Our State magazine. Her most recent story was “The Little Garden” (April 2012).