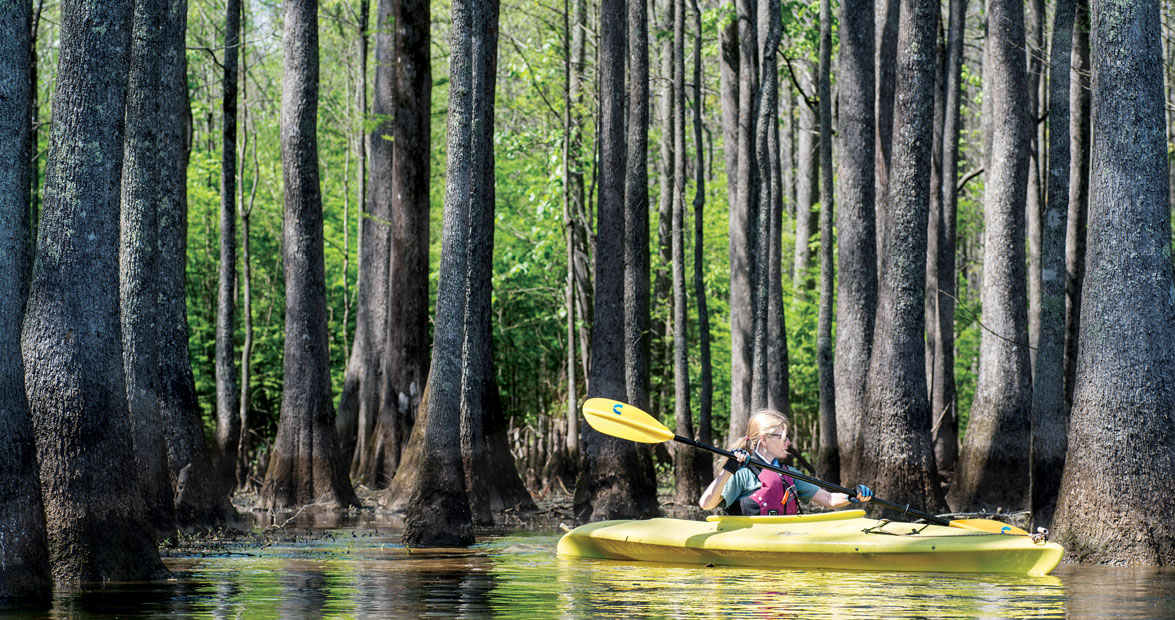 The lower Roanoke River is a wild, forested swamp, slick with peat, speckled with bright green duckweed, and draped in Spanish moss. It begins as a trickle in the Blue Ridge Mountains of Virginia, and by the time it slithers into northeastern North Carolina and passes the fall line, it stops playing by the rules. Here, it spills out, untamed and unapologetic, into the surrounding forest, wetting the hems of the ancient cypress trees. This is choice spawning ground for herring, shad, and striped bass (that’s rockfish, depending on who raised you), and a secret lair for bears and bobcats, otters and eagles, red-bellied water snakes and migratory warblers.

According to my big sister, Karen, it’s also home to great pie.

In the midst of this lush and wild marshland is a tin-roofed restaurant called the Cypress Grill. Open January through April, it’s hallowed ground for fisherfolk and locals, who come for the crispy fried herring and rockfish stew. Almost no one leaves without pie.

I’m a sucker for any larky adventure that involves pie, and it doesn’t take much to convince my sister to go paddling. So, with a nod to the local mayfly, whose entire adult life is measured in minutes or hours, we seize a rare moment when both of us are free, and head to the Roanoke. It’s a warmish spring day in late April, one day before the Cypress Grill closes for the 2017 season. We figure we’ll paddle until we’ve worked up an honest appetite. Pie is best when it’s well-earned.

My sister is a naturalist and a teacher. At 54, she still spends so much time outdoors that her resting state involves binoculars and a field journal. Gutsy and curious, with an outrageous sense of humor, she’s always been the Huck to my Tom.

“I’m a little worried about this snake,” she says casually, about 30 minutes into our expedition. Her bright yellow kayak lags 10 feet behind mine, but I don’t need to turn around to see what she’s up to. Her affinity for snakes has terrorized me since I was 3 and she was 5 and she tried to introduce her pet garter snake into our shared bath. As a child, she had so many snakes — and lost so many snakes — that our mom developed a particular “snake scream,” which was never mistaken for anything else. Once, an eastern kingsnake escaped in the car, and for weeks we all rode with our feet on the seats.

But in this moment, it’s Karen’s use of the word this that has me concerned: This denotes proximity. A bit earlier, I’d scooted past a substantial tar-colored snake floating halfheartedly in a river eddy. As Karen glides past me, I recognize that snake on the nose of her kayak, passed out like a spring break tourist.

I’m not here for the snakes, or the paddling, truth be told. My sister has promised me pie, pie so good, in a place so charming, that the very idea of it once inspired her and a fellow naturalist to persevere through a wicked storm on this very river. As Karen tells it, horizontal rain pricked their cheeks and gales of wind stunted their progress, but still they paddled on, knowing they were less than a mile upriver from the Cypress Grill. “I’m going to have the chocolate pie!” Karen hollered over the tempest. “No, the coconut! That’s it. I’m having coconut pie when we get there!” The promise of that pie kept them going. 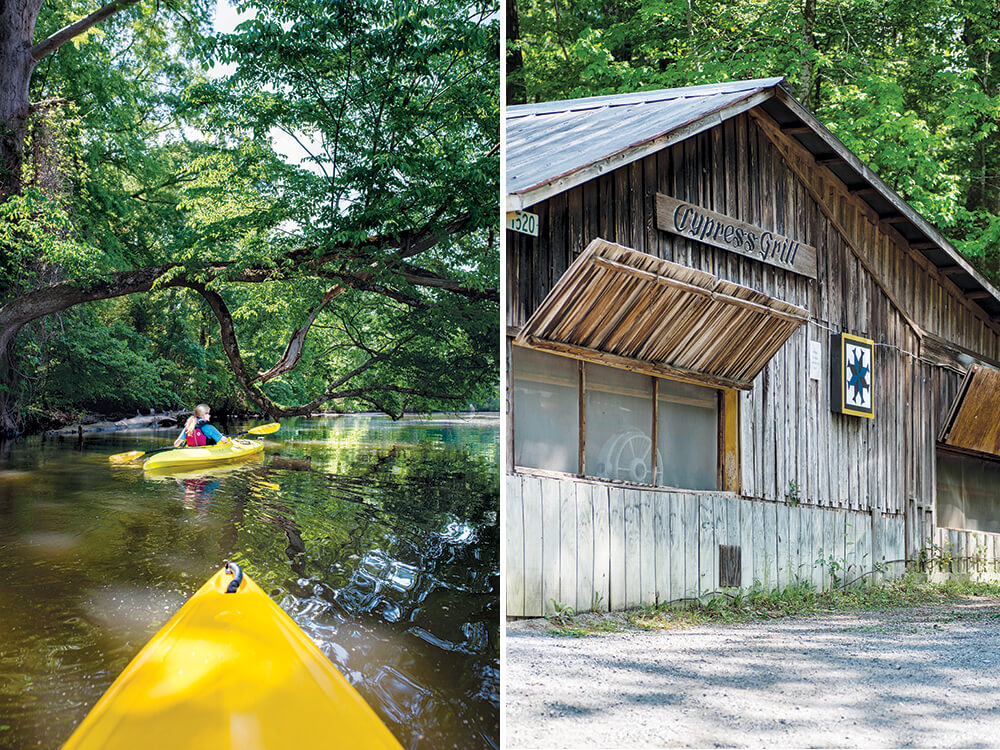 In spring, the Roanoke River is shaded by a green canopy. Kayakers can paddle up to the Cypress Grill, a riverfront destination in Jamesville since 1974. photograph by Lissa Gotwals

As it must for me, too. Instead of heading downriver for chocolate or coconut, we’re traveling upriver, alongside the swamp. Karen’s snake recovers and is released, but there are birdcalls to follow next. And suspicious insects in the water to examine. But I know what Karen’s really looking for: One snake is never enough for her.

The pie calls to her, too, eventually. When I glimpse the restaurant, I take the lead and head across the river. I’m thinking about lemon pie and proper meringue height when, out of the corner of my eye, I spot a wad of brown water snakes entangled in the shallows. I know very well that if I point out these snakes, pie will once again be postponed. But I’m a little sister, and I can’t resist proving that I, too, can find a snake. “Two brown snakes!” I shout without thinking. Karen spins her kayak around, pulls into the shallow water, and gets out — gets out! — to document them for her Instagram feed.

By the time Karen and I finally pull our kayaks onto the boat ramp, the Cypress Grill is humming with activity. A spring breeze slips through the screened windows, which are shuttered in January, but today are wide open and welcoming. We find a booth by the window and announce to the waitress our plan to bypass lunch and go straight to the pie. “One slice of each kind,” I say.

Nearby, at the cash register, owner Kathy Davis is greeting customers who’ve come to say goodbye for the season. Apparently, Karen and I aren’t the only mayflies who’ve made a special trip here today. 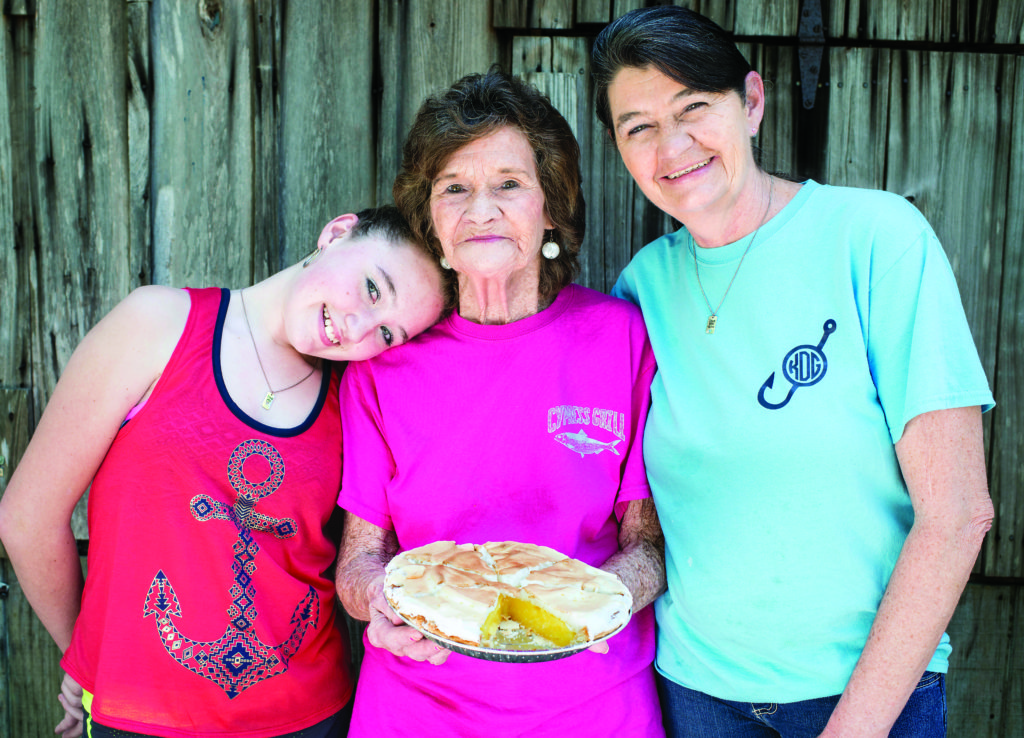 “I hate to see y’all close,” one woman says as she pays her bill. “But I’m sure you won’t miss working!” Kathy smiles warmly, but you can measure the length of the season by the look in her eyes. The Cypress Grill has been a family affair since 1974, when Kathy’s mom and dad, Sally and Leslie Gardner, started running the seasonal venue as a side business to farming. On any given day, family members, most of whom still live within shouting distance of each other, are at the restaurant, waiting tables, cleaning fish, peeling potatoes. Three generations are present today, including Kathy’s inquisitive 14-year-old daughter, Summer, who grew up napping under the candy counter, and her spunky 76-year-old mother, Sally, who’s wearing a hot pink Cypress Grill T-shirt.

“On the last week of the season, I used to say merry Christmas and happy New Year to everyone,” Sally says, laughing as she tells us about the days when she ran the restaurant. “I just got to know so many good people down here.”

In 2012, Sally and Leslie retired and handed over operations to Kathy. That’s when Sally put herself in charge of making the pies, which she bakes fresh every morning in her kitchen down the road. Except for the pecan, which, inexplicably, she prefers to buy ready-made. Last year she made about 800 — 20-plus a day. “I just like pie,” she says buoyantly. “And I give out the recipes. It’s not a secret!”

Not long ago, Summer started helping her grandmother in the kitchen, where a pot of chocolate bubbles on the stove and a line of pies cools on the counter. Before the pies are slipped into a wooden pie cabinet, Sally documents each one in a composition notebook. Season after season, pie after pie, and when January rolls around again, she and Kathy know just what’s needed.

This is not flashy pie. Or fancy pastry. It’s familiar and comforting, like old-fashioned pie is supposed to be, and made fresh each day by someone who expects you’ll come back for more. The lemon is tangy but not overly tart. The coconut is sweet and sticky. The chocolate (Summer’s favorite) is cool and creamy. 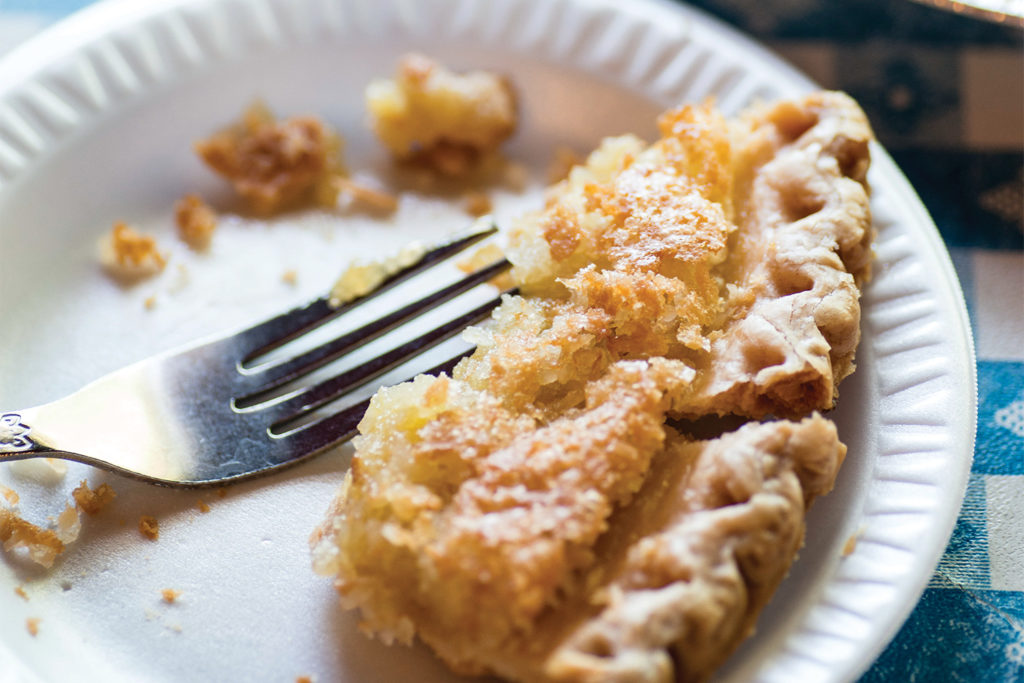 The real purpose of their journey was to find this piece of coconut pie at the Cypress Grill. photograph by Lissa Gotwals

Karen tends to the kayaks while I pay the bill. Through the window, I can tell from her stance that she’s found another snake, this one quite tiny. As I watch her, Kathy mentions that they’ve got two dinners and one lunch to serve. But she doesn’t need a calendar to tell her when it’s time to close up for the year. “The warmer it gets and the snakes start coming out,” she says. “Me and snakes, we just don’t do good.”

When Kathy turned the key to reopen the restaurant in January, the Roanoke River was cold, the breeze chilly, and the snakes nowhere to be found. Long gone, too, was that bright April morning I shared with Karen, searching for snakes and talking pie with Sally. A snapshot in a box full of favorite memories. But it turned out to be more than just a snapshot. It was far more important than we could have known, than we would have wanted to know, in fact: That day was one of Sally’s last at the Cypress Grill.

The pies we ate with her and Summer at the table, our crumbs on the blue-checked oilcloth, were some of the last she ever made. In July, Sally suffered an aneurysm, and Kathy, Summer, and their family found themselves saying an all-too-early goodbye to the vivacious woman they considered their rock. Pie-making now will fall to Kathy and her dad.

I am now in possession of a very special memory that has little to do with pie. Or snakes. But everything to do with the local mayflies. The female mayfly, Dolania americana, lives for only five minutes. Which makes it a lovely reminder of the brevity of human life — and how to consider spending it. Live in the moment and all that stuff. Don’t wait for plans to fall into place, or for the kids to get older, or the lawn to get mowed, or the house to get cleaned. You never know what can happen when you stop waiting for the perfect moment. How many Sallys have I missed because I was too busy to take an afternoon off? How many opportunities have I lost because I was too afraid of snakes?