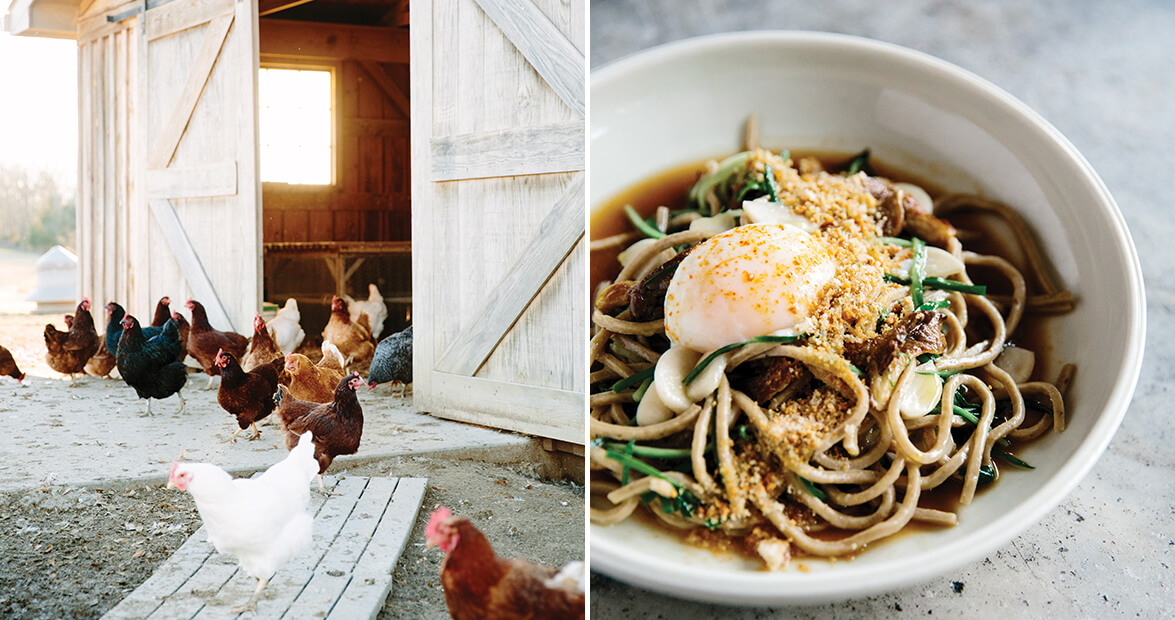 You order the chitarra. It’s like spaghetti, the server explains, but square, not round.

A neighboring table welcomes that same dish: a nest of mushroom noodles, knitted with cucumber threads, glossy with fermented turnip butter. There is sultry pork brodo — broth — shards of chives, a shower of breadcrumbs. A poached egg snoozes on top, waiting to be woken, oozy and yellow, sunny and bright.

This restaurant, Panciuto, opened in 2006 in the beating heart of Hillsborough. Its owner and chef, Aaron Vandemark, set out to explore Italian food with a map of native ingredients. In the decade since, he’s harvested six prestigious James Beard Foundation nominations for Best Chef: Southeast. But he doesn’t take full credit for his restaurant, its food, or its success. 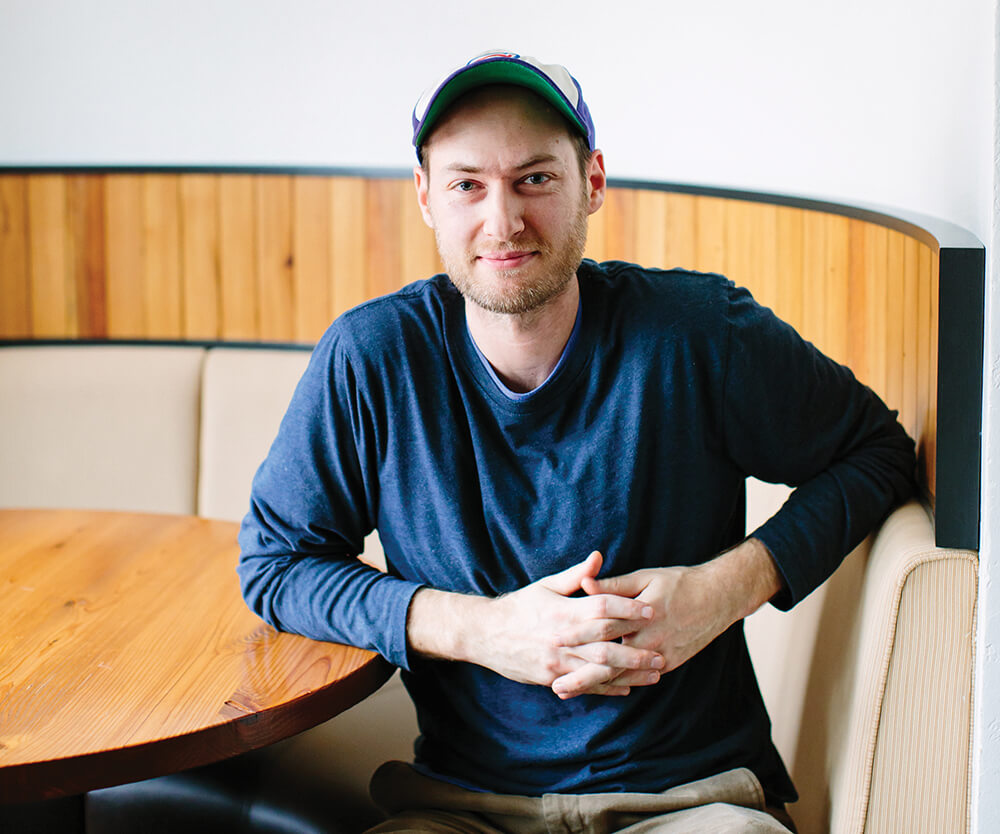 Chef Aaron Vandemark likes to spread the word about his “collaborators” — the local farmers and producers who help make every meal at Panciuto unforgettable. photograph by Anna Routh Barzin

“I define my work,” he says, “by the people I work with.” The farmers and producers, artisans and cooks, waiters and dishwashers. As Panciuto matured, Vandemark’s list of “collaborators,” as he calls them, sprouted and bloomed until it outgrew the menu itself: “Ninety-five percent of tonight’s menu is sourced from neighboring farms, artisans, and friends,” the page reads. “We love to brag on these people, so just ask.”

“I happen to think that maybe they’re the best farmers in the state,” Vandemark says. “Maybe in the world.”

With good reason: Tim and Helga MacAller have been farming off and on for almost 35 years. At Four Leaf, they grow chard, spring onions, arugula, parsley, dill, cilantro, mâche, pea shoots, fava beans, garlic, edamame, and European cucumbers — to name just a few.

The last is one of Vandemark’s favorites — long and lean, with a thin skin and few seeds. They grow in the farm’s greenhouse, where the MacAllers plant them in five-gallon buckets and tie strings to the ceiling. When no one is looking, the cucumbers start to climb.

Duke, a Maremma sheepdog, hears something. He dashes toward the edge of the field and barks — and barks and barks. A few chickens flutter back into the barn. Traditionally, Maremmas protect sheep. But at Bracken Brae, seven Maremmas protect more than a thousand chickens from coyotes, foxes, hawks — and journalists.

Under an endless blue sky, the chickens roam acres of open pasture, munch on bugs and worms, and take luxurious dust baths. Even after their efficiency wanes, they’re never sold for slaughter. Instead, they move to what Linda Sakiewicz calls “the retirement home,” a pasture with a little garden growing sage and bay, where the “old girls” live the rest of their lives — 10, even 15 years. 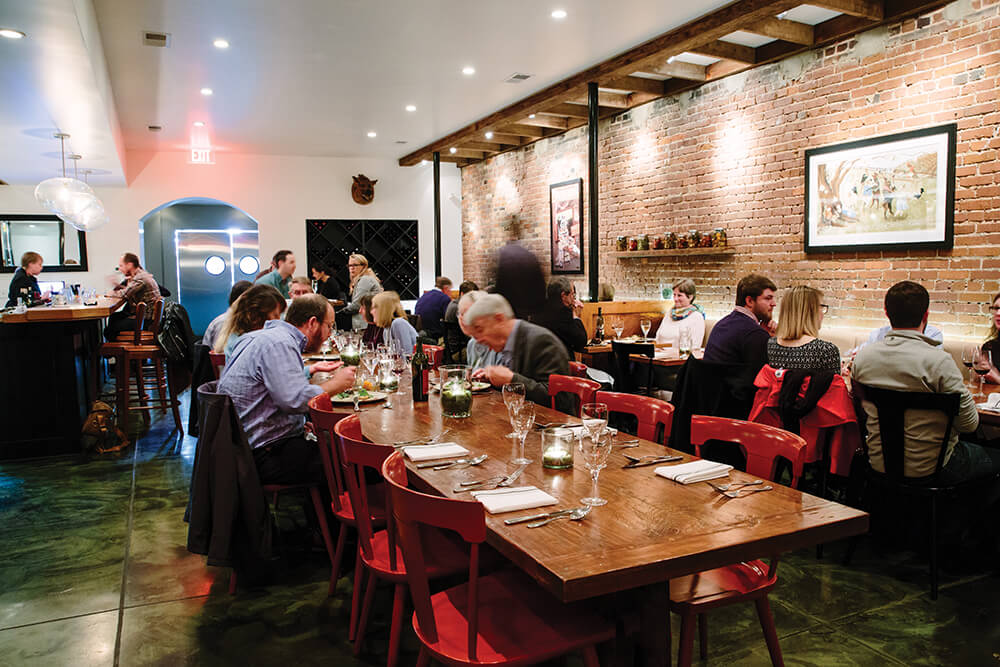 At Panciuto, nearly every element of a dish like the chitarra pasta is local, from the egg on top — laid by chickens at Bracken Brae Farm in Mebane — right down to the bowl. photograph by Anna Routh Barzin

When Haw River Mushrooms started a few years ago, Ches and Laura Stewart produced their crop on 150 logs. But as demand developed, this approach became unmanageable.

Now, they inoculate bags of rye, millet seeds, and hardwood sawdust with mushroom cultures. Imagine foraging in a forest — except the forest is a laboratory. In less than two weeks, the bags yield two to three pounds of oyster, shiitake, or lion’s mane mushrooms.

In its youth, Haw River produced about 10 pounds per week. These days, it’s more than 100. As the farm expands, so does the Stewart family. Last year, they had twins. “They don’t eat mushrooms yet,” Ches laughs. “But they will soon.”

“Who is this guy calling about turnips all the time?” Alice White remembers thinking with a laugh. The year was 2006, and the guy was Vandemark.

Alice and her husband, Stuart, started their farm the same year that Panciuto opened. Vandemark was one of the Whites’ first customers and remains one of their most devoted — especially for those tender hakurei turnips, which he ferments as a pantry staple at Panciuto.

“It’s definitely our favorite restaurant,” Alice says. “The first time we went there, it blew our minds.”

Stuart recalls dining there during the North Carolina State Fair one year when Vandemark took some of their petite, pinstriped fairy-tale eggplants, and turned them into funnel cake.

In a studio tucked in the trees, Mimi Logothetis creates porcelain plates and mugs, vases and lamps, even jewelry, almost all white and black. She views many of her pieces as “vessels” whose purpose is determined by their purchasers.

With Panciuto, this means “pasta bowls,” or Logothetis’s custom plate-meets-bowl shape. When filled with food, they appear plain. But under the noodles, there is a graphic design — often borrowed from an old dictionary or medical book. The design depends on the plate. It could be a dinosaur next to a pair of dice. Or an illustration of a stomach across from the word cured. The latter, to Logothetis, symbolizes feeling satiated — the same sentiment Vandemark attributes to the word panciuto, which means “potbellied” in Italian.

The ticket machine in the kitchen purrs: chitarra. Long before you knew you had to have it, the dish was getting ready for you.

Long before you knew you had to have it, the dish was getting ready for you.

The turnips arrived more than a week ago, when they were plunged into a jar of vinegar and spices. The mushrooms were used for this and that, but their stems were collected and saved, dehydrated and ground, then mixed with wheat flour and eggs. The dough was rolled thin and pressed through a chitarra cutter — Italian for “guitar.” And the cucumbers followed suit, like a copycat sibling, on a mandolin.

Now, a skillet hits the stove — a splash of fermented turnip brine and a big knob of butter. The mushroom noodles dive into boiling water; a few minutes later, they leap over to the skillet. Hot pork brodo pours on top of the word cured in a pasta bowl until it fades, then disappears. The noodles meet cucumbers, chives, parsley, and then the brodo. There are breadcrumbs, a pillowy egg, splatters of chili oil, and, suddenly, a hand.

The server exits the kitchen, walks toward your table. You smell the mushrooms, the butter, the broth. She sets down the bowl, smiles. And you pick up your fork.