EDITOR’S NOTE: This story originally appeared in the March 2014 issue of the magazine as part of its Tar Heel History series. It was updated in April 2018.

For three minutes only, and only on a Sunday, only between noon and 5 p.m., or after 7 but before 9, and only station-to-station, not person-to-person, and never ever collect unless you have an emergency (though it felt so wonderfully important to be able to say, “Collect”).

Admit it. Remembering today’s passwords and PINs is child’s play compared with memorizing rate information to make the least expensive telephone call, known until only recently, by the way, as long distance. Plenty of people remember when our pocket-size telephones were larger than shoeboxes. Even the accoutrements were wondrous: When I wasn’t turning over the clever miniature hourglass — three minutes! — beside my grandmother’s phone, I was continually flipping the alphabetical tabs on the spring-up early Rolodex of frequently dialed numbers next to it.

In 1879, three years after Alexander Graham Bell commanded Thomas Watson to “Come here, I need you,” telephones arrived in North Carolina, and the first long-distance call was made from Raleigh to Wilmington on April 14. Another three years, and Southern Bell opened in Raleigh with 24-hour service via two operators and — imagine! — 29 “subscribers.” Southern Bell had also begun or purchased operations in Greensboro (1889), Wilmington (1890), Winston-Salem (1891), and Asheville (1899). Meanwhile, Down East, G.A. Holderness and other businessmen established an exchange in Tarboro in 1895 with a capacity of 50 lines in Washington, Kinston, and Fayetteville. By 1900, Carolina Telephone and Telegraph Company  (CT&T) had operators in Maxton, Smithfield, and neighboring towns serving 1,645 customers. Despite shortages of manpower and materials during World War I, CT&T could boast by 1927 that nearly every town in eastern North Carolina had telephone service. The combined impact of these two providers was drastic: immeasurable, unimaginable, and, as we have seen, unstoppable.

Previously, a barn fire, a burst appendix, or a rolled tractor on a family farm often equaled death and destruction as the family watched helplessly. Every older person I spoke with (over the phone, naturally) mentioned that in that era, if you were fortunate to have a telephone, you shared it. “Neighbors came to use the phone all the time, and you were glad to help,” says Melba Ruth Jenkins, 92. Her husband received a call one night routed from the Greenville switchboard, on through the Robersonville switchboard, to their home phone. No one had a phone in the small town of nearby Stokes, and a woman’s husband had died in the Greenville hospital. Could Mr. Jenkins drive to Stokes and find her? He got in the car, drove to Stokes, located the address, woke her up, and delivered the sad news. “A telephone was a very special thing, like a car,” Jenkins says. “You respected it and took care of it.”

In the 1930s, the 1,100 residents of Walnut Cove relied entirely on Miss Birchy and her switchboard. Never mind a formal office; the switchboard was in her house. As my mother walked home from school, Miss Birchy might come to her front door and holler, “Your mama said to tell you she was runnin’ into Winston!” This was the same switchboard from which an expensive, emergency long-distance call was made by my grandmother to the Bishop of the Episcopal Diocese of North Carolina, in Raleigh, to indignantly let him know that at that very moment, the Walnut Cove Episcopal minister was raising a dog from the dead. Vital information indeed, as important as the long-distance call made to Miss Birchy from Durham so that she could dispatch the news that the town’s high school basketball team had won the state championship.

In Wayne County, Dr. Hank Stephenson’s family phone was the standing version made familiar in movies, with a mouthpiece, a long barrel, and a side hook for the receiver, but no dial. “Number, please,” answered the operator, known by everyone as “central.” When Stephenson’s elderly mother moved to Little Washington, she announced that, “Y’all have the meanest central!” because the robotic female voice so often broke into her (mis)dials, relentlessly repeating, “That number is no longer listed. Please check and try again.”

Take it from Margaret Adams: Meanness was not permitted. Adams began work as an operator January 7, 1949, at Greensboro’s only Southern Bell office, on Eugene Street. Adams was an information operator, local operator (when there were only four for all of Greensboro), toll — or long distance — operator. Whether on a split shift, night shift, or day shift, Adams sat under the watchful eye of a supervisor, who perched on an elevated chair “to make sure we didn’t misbehave.” Or “enhance their ticket count,” as Adams was accused of when she obligingly made back-to-back calls to Salt Lake City for a local professor, albeit to different individuals. 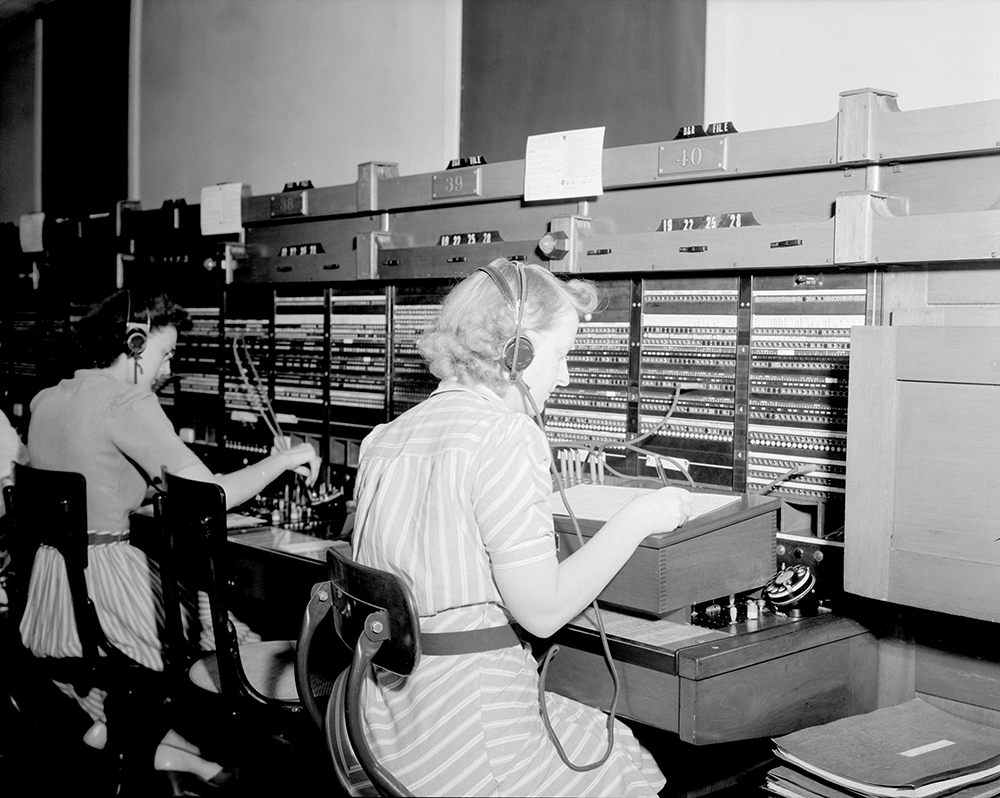 Telephones were a girl’s best friend in 1954. Southern Bell operators (picture dated 1934) connected the party group to select boys — and sometimes parents listened in on the party line. photograph by AT&T Archives and History Center

Strict account was kept of the number of calls each of the operators took, to make certain she was pulling her weight. “If the switchboard lit up, you answered,” Adams says. When country people called and she couldn’t understand their accents, Adams consulted a barrel file of cardboard strips about the length of Popsicle sticks, which contained all the names and numbers of subscribers. A strip was manually removed or added when someone failed to pay his or her bill or moved away. “It was a good job,” Adams recalls. Indeed it must have been: Margaret Adams stayed with Southern Bell for 36 years.

Lauch Faircloth, 86, remembers driving seven miles to Clinton to make telephone calls. The switchboard was located in a room over Reynolds Drugs. “You’d tell Mamie who you wanted to call, she’d connect you, and you went into the booth located in the same room to talk,” the former senator says. “The operators knew everything and didn’t mind telling it. I remember precisely when we got a phone at home. November 1941. One Sunday we came home from church and the phone rang. It was the sheriff calling my father to tell him Pearl Harbor had been bombed.”

Unfortunately, no one is alive to recall the earliest days of telephone service in North Carolina. The party-line stories, however, are alive, well, and legion if you nudge them. With their distinctive rings — one for the Smiths, two rings for the Joneses, three for the McGillicuddys — party lines had nothing to do with dancing and socializing, but with the number of families, or “parties,” sharing the same line. Except, of course, when they did have to do with parties. As a child in Wrightsville Beach in the 1960s, Katie Redhead spent rainy days eavesdropping on Mrs. Lehto chatting to Mrs. Broughton about what they were wearing to the Surf Club, and what would be on the menu.

A friend from Oxford reminds me that the one phone families had was always in a reverent location. As a child, I loved visiting pals who lived in older homes with a gen-u-wine telephone “nook,” usually dark, close, wood-walled, excellent for hide-and-seek, and often located in the triangular space beneath the staircase. But in 1958, CT&T introduced the first colorful telephones, in a Kinston motel, and the telephone became a consumer object. Reverence waned, hide-and-seek paled, and crank calls ensued. Do you have Prince Albert in a can? Why don’t you let him out?

Still, some phone mischief has no age restrictions. Two doors up the street in Walnut Cove, the Woodruffs didn’t have a phone. “Every April Fool’s Day,” my 83-year-old mother remembers, “my father banged on their door at 6:30 in the morning and said they had a call at our house. Mrs. Woodruff would hurry over in her housecoat, pick up the receiver, and Daddy would shout, ‘April Fools!’ ”

Weekdays at boarding school, we were allowed to use the phone only between 9 and 10 p.m. One dorm pay phone was available to 30 girls, and if you left your place in line, too bad. All day you’d fondle your quarters to feed the phone to talk to your boyfriend, constrained by the ticking seconds, the glares of impatient classmates, and that terrifying blankness when the machine was calculating, gurgling your coins, deciding whether to grant an additional three minutes with your beloved, or to cut you, and your budding romance, off.

Thank you, Southern Bell and Carolina Telephone. Thank you for permitting a state of textile towns, wee hamlets, and family farms, stretching from mountains to sea, to be knit together. Thank you for helping to save lives, and time, and comfort homesick children. Thank you for the delivery of news — joyous, tragic, or trivial. Thank you for this marvel, this — tool? gadget? machine? — instrument we so blatantly take for granted. How many smiles and sobs, entreaties and apologies, questions and confessions, answers and demands, proposals and denials, and of course, memories, have traveled the swaybacked lines I watched on car trips, lulled by that dip and rise, undulating and unending and dependable? Most of us would rather return to the days of horse and buggy than relinquish our telephones. Communication always trumps travel.

And speaking of traveling … Is your refrigerator running? You better go catch it!