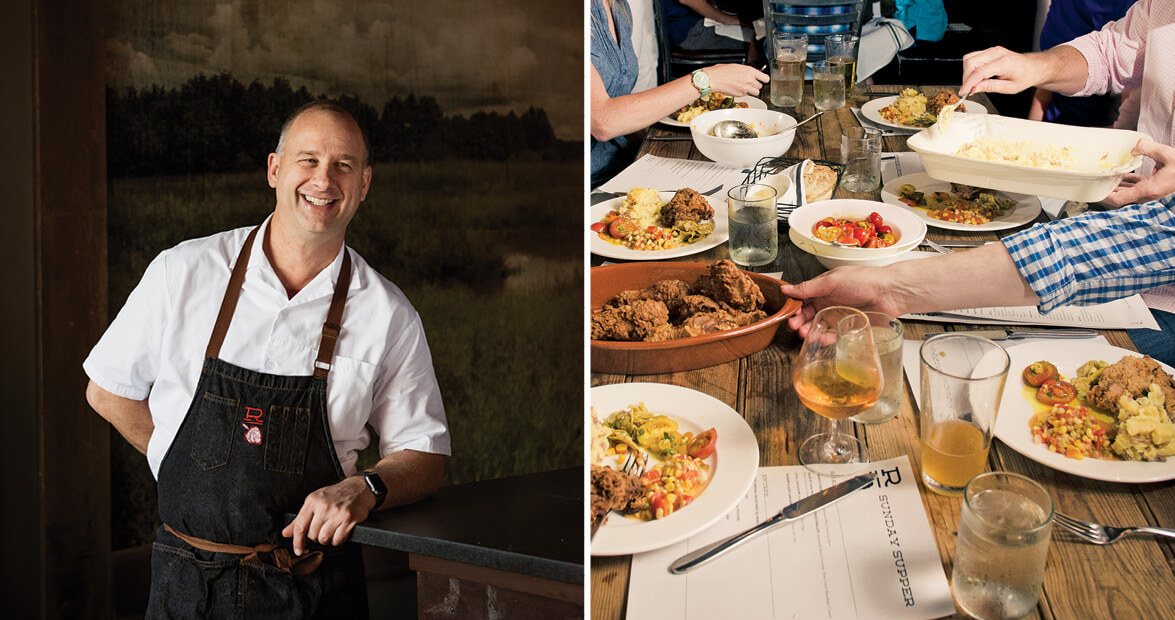 John Fleer has no trouble describing a Sunday supper: family and friends gathered around a table abuzz with chatter, everyone reaching to pass plates and speaking up to spin yarns. And the meal doesn’t end when the eating is done. The most important part — the communion and lingering conversation — might have only just reached cruising speed. You see, Fleer believes deeply in the substance and sustenance of Sunday suppers, so long as they don’t have to fall on a Sunday — or be confined to suppertime.

Among the most admired Southern chefs in the country, Fleer’s career requires a lot of time away from the family table in service of turning tables at his Asheville restaurants. So in years past, Sunday supper happened whenever it could: say, at 10 p.m. on a Monday night, when he and his wife, Katy, a clinical psychologist, came home from a long workday and their sons got in from soccer practice. No matter how hectic their schedules, they always managed to find time to sit down together, because sharing meals matters — not so much for the food as for the conversation and the slow accrual of tradition.

Now that the boys are grown, there’s the wrinkle of physical distance to contend with, too: Jackson works in Washington, D.C., Daniel is a student at Davidson College, and Justin is a student at UNC Asheville. To be sure, food and cooking have a role in this family, but Fleer has never expected his sons to become accomplished cooks, although he’s pleased and relieved that they are “great eaters.”

“I’m convinced their character,” he says of his three sons, “is due to all views being equally valid, valued, and heard around our table.” And with a big grin, he adds, “Well, that, and the fact that they have an excellent mother.”

One might think that a renowned chef would mention food up-front when describing Sunday suppers, but this chef believes that although the food ought to be good, of course, it isn’t the whole point of the meal. “If I got a surprise phone call and learned that we could all eat together tonight, I’d scan the fridge and maybe swing by the store, but I’d be more curious about what we’d talk about,” Fleer says. “That’s what to look forward to in a family meal.”

He taught each son how to make one favorite dish — what he calls their “back-pocket dish” — that can be made with comfort, pride, and joy whenever and wherever it’s needed. Jackson picked coq au vin. Daniel chose risotto. Justin wanted spaghetti and meatballs. When asked what his favorite Sunday supper menu is, Fleer says it’s whatever someone else wants to cook for him. “It doesn’t matter,” he says, laughing. “I’m grateful to be cooked for, to be asked over, to be offered a seat at a table.”

Whether he’s cooking or simply a guest, Fleer says, “It’s the intention that makes a meal special, makes it count.” That premise is rooted in his growing-up years in Winston-Salem. His father was a beloved political science professor at Wake Forest University with a passion for civic engagement and a penchant for inviting his students over for dinner. His mother commuted to NC State to obtain a Ph.D. when Fleer and his siblings were young, and she went on to have a career in adult education and nonprofits. “That made me a latchkey and casserole kid. The point of Mom’s cooking,” he says with a chuckle, “was to make sure we didn’t starve. But the point of our meals was to make sure we were civilized.”

The first thing he ever cooked on his own was a tuna casserole on a night when his mom knew she’d be home later than usual. Over the phone, Fleer’s mother rattled off a vague recipe, and he took it from there, soon tending and feeding his brother and sister, too.

“Passing food hand to hand, holding a platter for the next person — these are the greatest bridges between people.”

His fondest food memories formed during summers with his maternal grandparents in the Tidewater area of Virginia, near Gloucester, and later in their Richmond home. “Starting at age 4 or 5, I spent healthy chunks of time out on the water, pulling up crab pots, or helping in their garden,” he says. His Nana’s favorite dishes, such as tomato aspic, raw oysters, pepper relish, and peanut soup, persist at Fleer family feasts to this day.

His mom’s tuna casserole and too-oft-served Brunswick stew? Not so much, although he’s quick to point out that his parents’ interest in food broadened as they had more chances to travel and more time to enjoy it. They turned into what Fleer calls “Williamsburg Anglophiles,” who delighted in making plum pudding that they set afire tableside. They made wine jelly. They rolled up a bûche de Noël to serve as Fleer’s cake on his Christmas Day birthday.

More important, they shared their joy of having people over. “My parents view everyone they meet as potential best friends. They seek people not just to meet, but to get to know,” he says. “My grandparents, my parents, Katy’s parents, they all made people feel welcome and heard. They taught me the sensibility of hospitality.”

Fleer’s culinary curiosity was piqued during semesters abroad, especially his time in Venice in college. The class was divided into groups charged with exploring local cuisine and cooking for one another several nights each week. It was the first time that many of them had given food much thought at all, much less pondered its role in their culture and value system. “We thought we were making sure we had something good to eat without going broke. But what we were really doing was establishing relationships and forming values around a table,” he says. “It was an epiphany. I was converted.”

Midway through pursuing a graduate degree in religion and culture at UNC (while also working at a local Italian restaurant in Chapel Hill, where he rolled pasta and baked bread), Fleer decided to change direction and head to the Culinary Institute of America to become a professional chef. His first job after school was as chef at the storied Blackberry Farm in Walland, Tennessee, where he made his mark on Southern cuisine. His career and reputation grew, as did his family; however, more and more work meant less and less time eating at home. “There was no such thing as a Sunday off, no room to create a space for a Sunday meal,” he says. Time was limited, but the Fleers took the ritual seriously. “We stayed home. No going out. We cooked. No take-out. Food and eating were our together time. The boys were fed and socialized.”

In Asheville, Fleer now helms two successful restaurants, Rhubarb and The Rhu, with a third, Benne on Eagle, launched in late 2018. He’s proud of all three, but doesn’t hesitate to share his particular pride in the Sunday Supper series at Rhubarb. Guests gather at communal tables in a quiet, welcoming upstairs room, where they share food family-style. The menu is set, and the food comes to the table in large bowls and on platters for guests to pass. “Passing food hand to hand, holding a platter for the next person to take what they want  — these are the greatest bridges between people,” he says. “To sit and eat alongside whatever family you have — through origin, deliberate choice, or circumstances — is what it’s all about.”

When Fleer made that momentous decision to switch from religious to culinary studies and pursuits, he was hesitant to tell his maternal grandfather, who had concluded, despite having no evidence whatsoever, that his grandson was destined to become an Episcopal priest. But Fleer mustered the courage to call and say that he was headed to cooking school. After a pause, his grandfather asked, “Are you going to learn how to make Communion wafers?”

Fleer recalls that question with a quiet smile. But then, he realizes that he has a new answer: “Yes, actually,” he says now, satisfied. “I guess I did.”