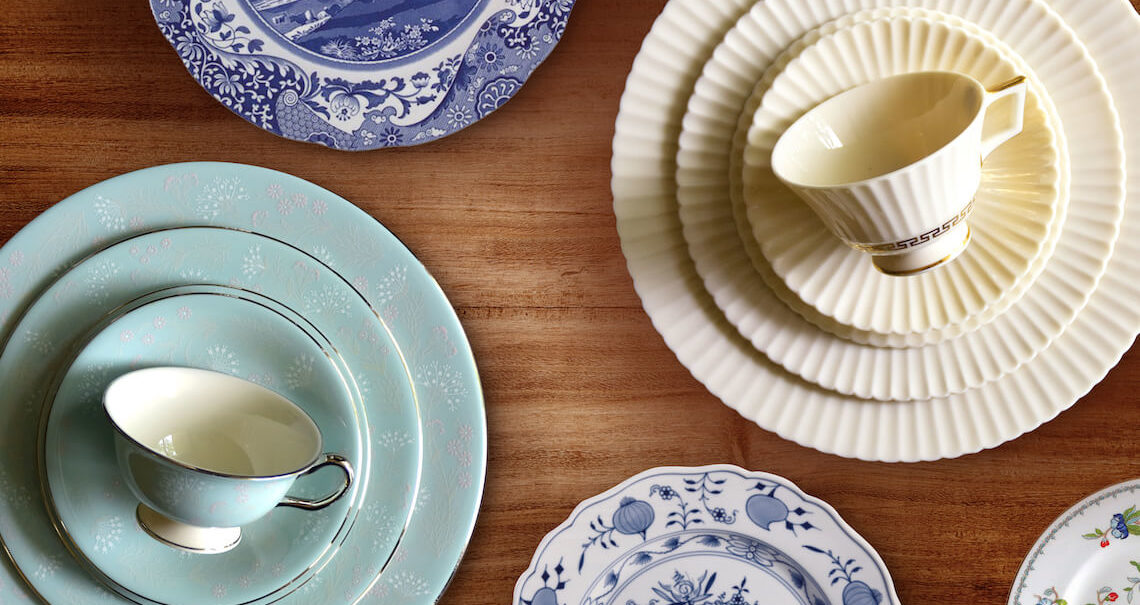 The table was set for three. Each plate was embellished with the delicate, cobalt blue pattern Mindi Truitt had become so familiar with, even at the young age of 11. Blue Danube. The Japanese china was one of a few personal items the Truitt family carried with them through countless international moves, the result of her father’s position as a chaplain for the U.S. Air Force. This latest move, in 1974, had brought Mindi and her parents to the island of Crete in the midst of a war between Greece and Turkey.

“We had just moved into our quarters and there were boxes everywhere,” Mindi recalls. “We were tired, and mom set a table. It was a comforting thing. She always felt like setting a table and having some structure in the middle of the chaos was important.”

Now, sitting comfortably in her Burlington home with the walnut colored china cabinet her grandfather built gleaming behind her, Mindi can rattle off the names of china patterns like a chemistry professor can tick off the elements in the periodic table. There’s the Franciscan Apple pattern dishes her grandmother collected. There’s Corsage by Castleton — her mother’s wedding china that she only used for the best occasions. Mindi still has the receipts from Hong Kong for the red-rimmed place settings her father sent her mother from Vietnam — Gold Hill by Noritake — when he was stationed there. And she knows the Christmas season can’t officially start until the Truitts drink coffee out of the Waechtersbach Christmas Tree mugs after their Thanksgiving meal. 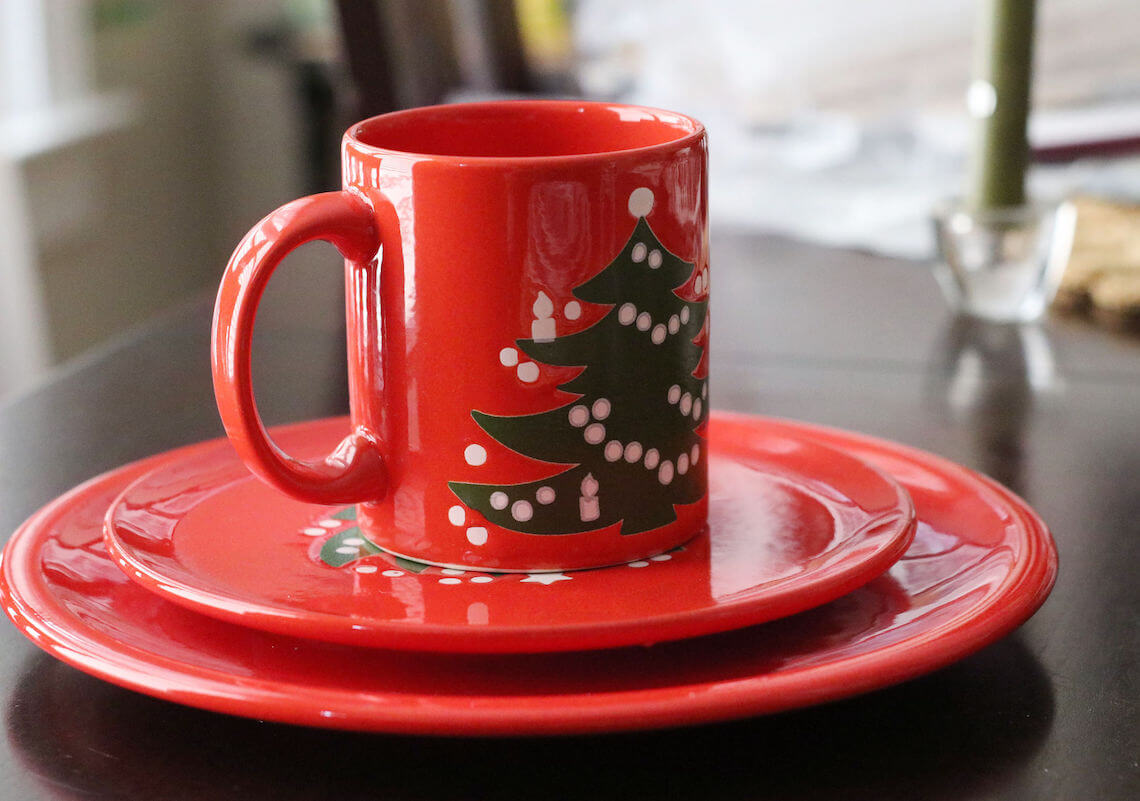 Mindi’s love for pretty place settings was put into motion nearly 20 years before she was born, in an antiques shop located off of NC Highway 70 (now South Church Street) in Burlington. William “Bill” Johnson, Mindi’s maternal grandfather, opened the shop, called Johnson’s Antiques, in 1945. Dolores Truitt, Mindi’s mother, was enthralled with her parents’ shop, and especially with the china. Dolores, now 88, says her love for china was encouraged. When she was in the sixth or seventh grade, she received her first tea set from a wealthy aunt. Her dad also collected many pieces for her, including Carnival glasses in a vibrant shade of purple.

And even when money was tight, Dolores gravitated towards fine china. One instance she can’t recall without breaking into laughter is a shopping trip with her late mother-in-law. Dolores was newly married and “quite poor,” she says. So when her mother-in-law came to visit, she insisted on buying Dolores something. Dolores really needed a new pair of shoes, but as soon as she entered the Lord & Taylor department store, she headed straight for the dinnerware section. That’s when she fell in love with the Blue Danube pattern. “I said, ‘If you want to buy me something, buy me two place settings of this,’” Dolores says with a chuckle. 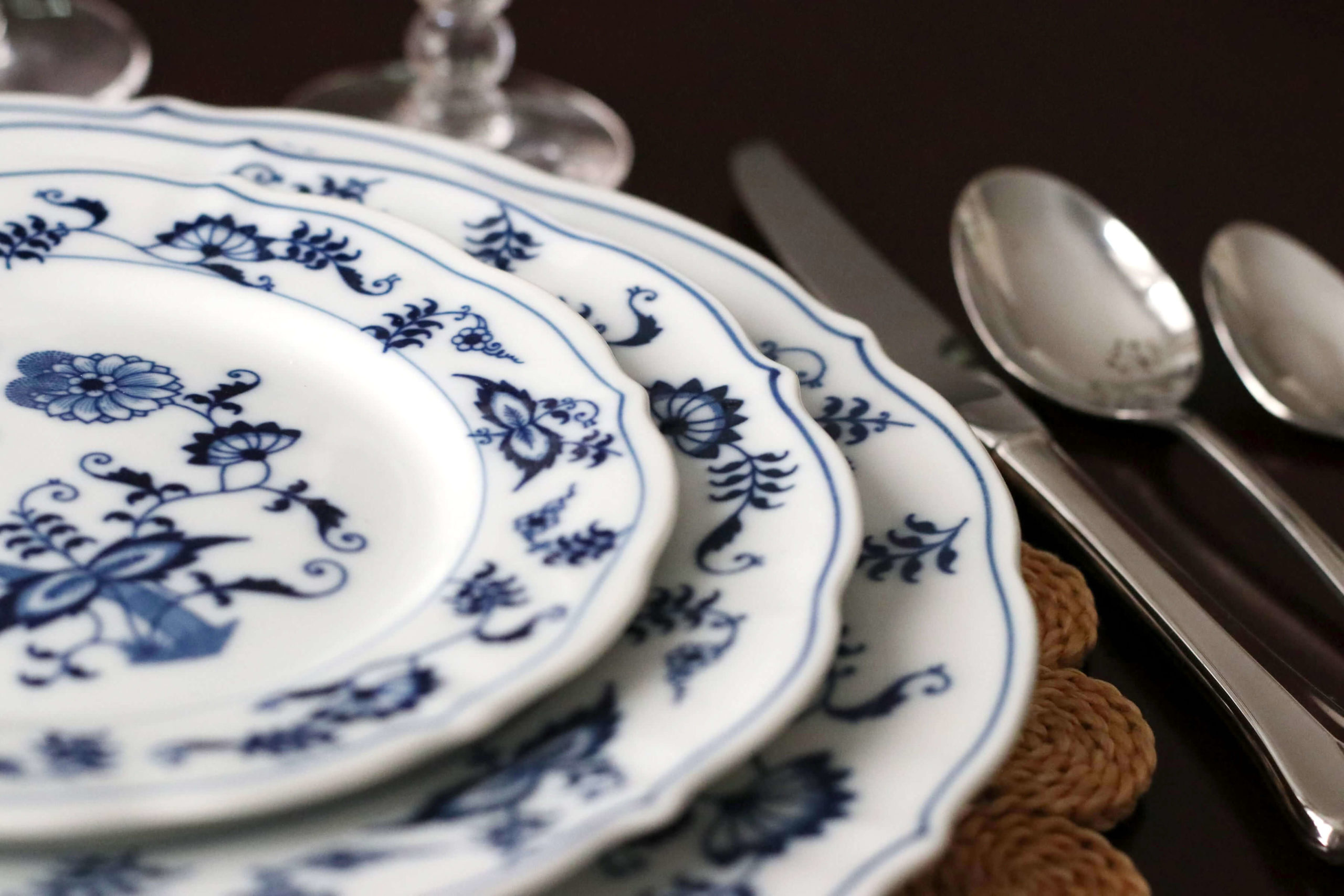 A set of china featuring the Blue Danube pattern was one of the few personal items the Truitt family always took with them, no matter where they moved. photograph by Replacements, Ltd.

Dolores was taught that the dinner table is the most important part of the home. “I was always taught to treat your family like guests and your guests like family,” she says. Collecting china helped Dolores carry out that philosophy, she says. So, as she moved countless times, the Blue Danube china came along for the ride, bringing color to the dinner table and a sense of familiarity and comfort to Mindi’s childhood.

The knack for collecting didn’t stop with Dolores and her parents; it also extended to her sister and brother-in-law, Billiefaye and Don Bolden. Mindi’s family’s gatherings were always a small, intimate affair, mostly because she was an only child — the only grandchild on her mother’s side and her aunt and uncle’s only niece. A love and admiration for china helped bring Mindi’s already tight-knit family even closer.

Mindi visited her Aunt Billiefaye, Uncle Don, and grandparents in Burlington as a child, but it wasn’t until the fall of 1981, when Mindi attended college at Elon College, that she made North Carolina her permanent home, too. Over the years, Mindi’s love for china has remained a constant in her life, even after her grandfather died and her family sold Johnson’s Antiques in the late ’80s. But it was hardships and losses over the last decade that truly reignited Mindi’s passion for collecting.

In 2008, when Mindi went through a difficult divorce, she sought to carve out something of her own: She sold her wedding china, Jefferson by Lenox, and started collecting Cretan by Lenox as an ode to the few years she lived on the island of Crete. Then, in 2017, Aunt Billiefaye died, followed by the death of Uncle Don just a little more than a year later, on her birthday. Mindi had to complete the difficult task of clearing out her aunt and uncle’s home, including her aunt’s 18 sets of dishes. “When I could see after I stopped crying from cleaning out the attic — because it was very emotional — I just fell in love with china all over again,” Mindi says.

It was in the wake of losing her aunt and uncle that Mindi started making more regular trips to Replacements, finding comfort by walking down the aisles lined with gorgeous plates and glasses, bowls and saucers, reminiscing on the dinners she shared with family over their own beautifully decorated table. Mindi says Bob Page, CEO and Founder of Replacements, and his staff “saved her” after the death of my uncle. “I sent Bob Page a thank you note and said, ‘[Replacements] is kind of like Disneyland for adults,’” Mindi says. “He responded with a lovely note. It’s things like that, that makes collecting china special. It’s not just collecting an object, but the memories behind it.”

These days, in between attending Replacements events with her mom, Mindi likes to use her china to pay tribute to special memories in her home or make a mundane experience an upscale event. For example, she commemorated a trip to Budapest, Hungry, last December with her mother by placing a picture from their trip next to a Herend figure of a Hungarian bride and an Anna Weatherly mocha cup with a lid and saucer in the Midsummer pattern. She also likes to take a note out of aunt’s book, and will drink a soda out of a beautiful wine glass, like a Nachtmann Traube. “Sometimes collecting can come from a place of pain,” Mindi says. “But the end result is it brings you a lot of joy.”

During childhood, Mindi told anyone who asked that her home was simply “the military.” But in retrospect, it was the porcelain plates and bowls she knew so well that made each house a home. It was Blue Danube, with its design as deeply blue as the waves in the Mediterranean Sea, that welcomed Mindi to Greece, and throughout her life, it’s been her connection with other patterns that has consistently brought her joy.