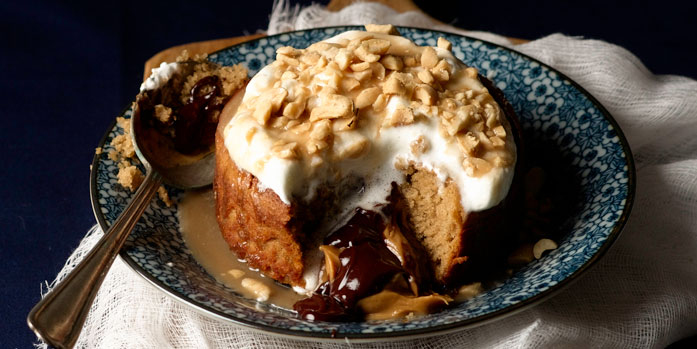 For the cake: Preheat oven to 400˚. Spray ramekins with nonstick baking spray. In large bowl, mix brown sugar, oil, applesauce, and peanut butter until fluffy. Beat in eggs one at a time; stir in vanilla. Combine flours, baking soda, cream of tartar, and salt. Mix into peanut butter mixture, alternating with milk. Set aside.

For the Pepsi reduction: In heavy saucepan, on medium heat, reduce Pepsi until about half of original volume and thickened. Set aside.

For the first filling: In small, microwave-safe bowl, warm chocolate and Pepsi reduction in 20-30 second intervals, stirring after each, until melted together.

For the second filling: Combine all ingredients in small, microwave-safe bowl, and warm for about 15 seconds. Stir to combine, and cream.

To bake cakes: Fill each ramekin half full with peanut butter cake mixture. Put 2 teaspoons of each filling on top of each cake mixture. Top with more batter until ramekin is almost full. Bake at 400° for 15-20 minutes. Tops will crack slightly. Remove from oven, and run a knife around cakes to loosen. Let cool for 5 minutes. Invert onto serving plates. (If using springform pans, slide onto serving plates.) Top with dollop of whipped topping and crumbled peanuts. Drizzle with Pepsi reduction. Best if served warm just after baking.

*Note: For applesauce, use 4 cooking apples, 2 tablespoons water or apple juice, and 2 tablespoons sugar or honey. Peel, core, and chop apples. Place in microwave-safe bowl. Sprinkle with water. Cover tightly, and cook on high about 6 minutes or until apples are tender. (Cooking time will vary depending on type of apple used.) Add sugar, and mash with potato masher until desired consistency. (If the apples are naturally sweet, you can omit adding sugar.)

The first thing you’ll notice about the old Southern tradition of putting salted peanuts in Pepsi is that it’s not all that easy to get those peanuts in.

The opening at the top of a drink bottle isn’t made for inserting or dispensing food. It’s a drink bottle. So be careful. Be slow.

And by all means, be sure. As individuals, Pepsi and peanuts stand just fine on their own. We North Carolinians gave birth to Pepsi-Cola in New Bern in 1898. After 114 years, it’s proved to be a sweet treat by itself. And we’ve been growing peanuts in northeastern North Carolina since we first learned to farm. At ballparks and picnics and anywhere, they’ve proved to be salty snacks that don’t need any help.

The next thing you’ll notice is the fizz, a reaction between the two opposites. To the eye it looks violent, but to the ear it resembles the familiar sound of waking up to the snowy screen on an old television in the middle of the night.

The next thing you’ll notice is that time will pass, waiting for the fizzing to stop. Many North Carolinians will use this time to recall the grandfather who taught them to mix a soft drink and peanuts sitting in front of the old service station. This tradition was born with his generation, and only a few of us carry on with it today.

“It brings back a lot of memories to people who grew up in the South,” says Cecilia Budd Grimes, author of the What It Means to Be Southern series. Grimes remembers the tradition mostly with Coca-Cola. “It’s part of who we are.”

One thing that’s true, though, is that it’s not just Southern. Midwesterners consider Pepsi and peanuts a tradition, too. But in the Southwest, they put popcorn in their Pepsi.

We have other combinations that just work. RC Cola and MoonPies come to mind. Why peanuts don’t go into an RC Cola, we don’t question that. They just don’t. They go in Pepsi.

The reality is Pepsi and peanuts lasted only a few decades as a prominent combination. Even Grimes remembers it mostly from watching her grandfather Budd at the service station in Siler City. We don’t see that very often anymore.

North Carolina is changing. People move here from elsewhere now, and we wonder: How will they mix? Will they take to North Carolina’s traditions?

Which brings us to the last thing you’ll notice about the old Southern tradition of putting salted peanuts in Pepsi: After those first few gulps and chews, it’s not all that easy to get those peanuts out. And so they float in that sweet pool of North Carolina’s soft drink, two opposites waiting together as one fine refreshment.

Try the other quintessential North Carolina cakes that appeared originally with this one:
The Krispy Kreme Cake
The Maple Syrup & Country Ham Cake
The Pimento Cheese Cake
The Nabs Cake