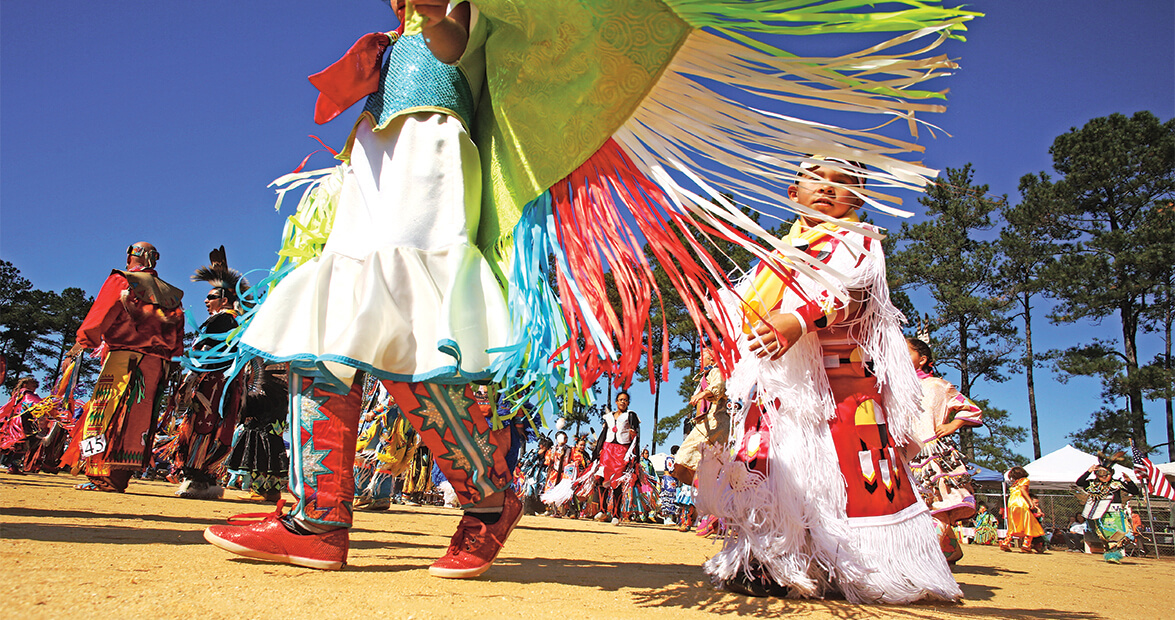 Feature image, above: During an intertribal dance at the Waccamaw Siouan powwow held each October in Bolton, everyone is welcome to join in. 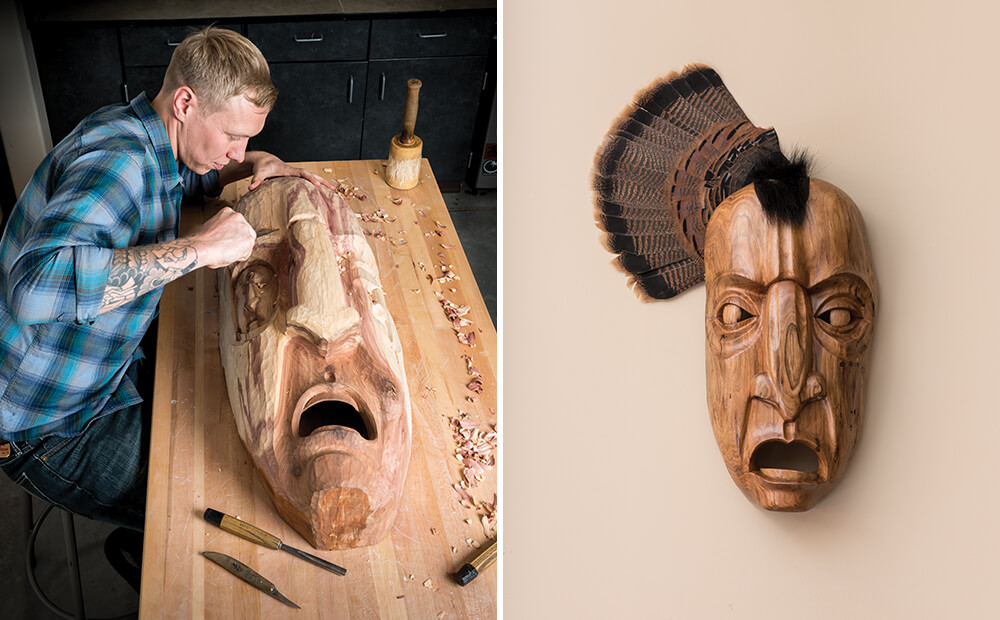 Joshua Adams grew up around wood carving: His uncles carved, his great-uncle carved, and the tools of the trade were always nearby. Adams developed his own style in carving classes at Cherokee High School, imbuing every piece of his art with cultural purpose. Hand-carved masks, with their proven place in Cherokee history, are a natural medium, and he draws on the tribe’s stories and legends to create pieces like the award-winning False Faced God (left) and Clan Gatherer (right). Now, Adams teaches the carving class he once took at Cherokee High, often reminding his students that as artists, there’s no better source of inspiration than their own vibrant heritage. 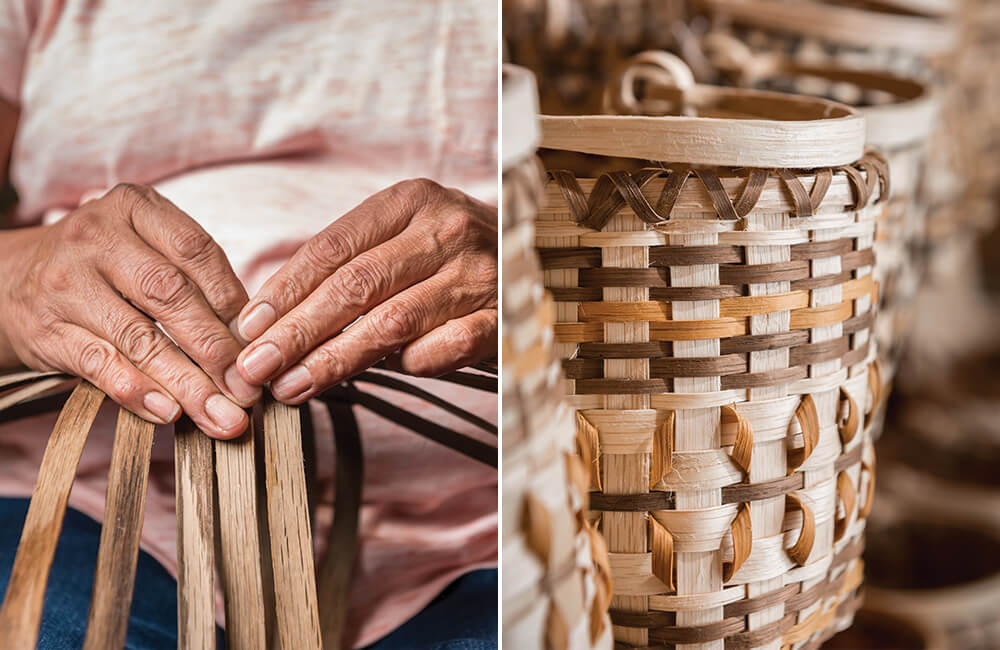 Faye Junaluska would recognize one of her family’s baskets anywhere. Long a part of Cherokee culture — made to catch fish, carry food, and for many other purposes — baskets remain an important means of artistic expression, and families take pride in their distinctive patterns. Junaluska’s mother, Emma Taylor, was a renowned basket maker — her work has been exhibited in the Smithsonian Institution — and when Junaluska and her sisters were young, they’d go into the woods with her, listening to her stories and helping her gather materials: white oak, black walnut, bloodroot. Taylor passed away in 2002, but now, as Junaluska prepares to teach her granddaughters the family craft, she feels a connection, reaching out across the generations and weaving them tightly together. 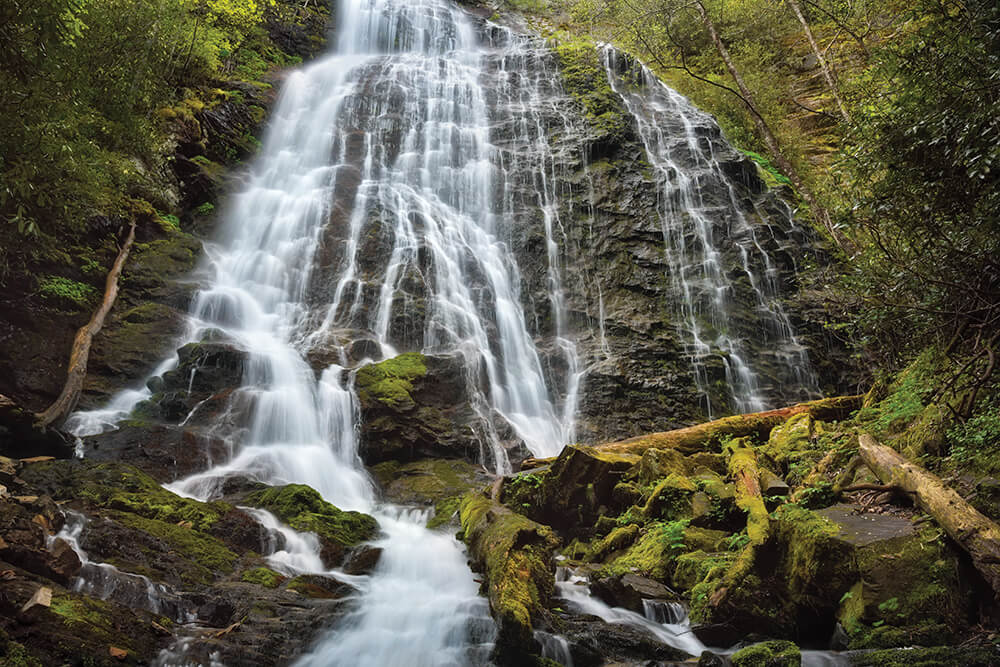 In Cherokee stories, waterfalls can be portals to other worlds. On the Qualla Boundary, the road to Mingo Falls also crosses a threshold of sorts, into a remote area known as Big Cove. Here, some of the most respected keepers of the Eastern Band’s traditions preserve the old ways. Among the stories that have endured is “The Long Man,” the spirit of the water, who holds the power to cleanse people physically and spiritually. To stand at the foot of Mingo Falls, watching the water tumble 120 feet over granite boulders, is to witness a place of beauty and wonder. 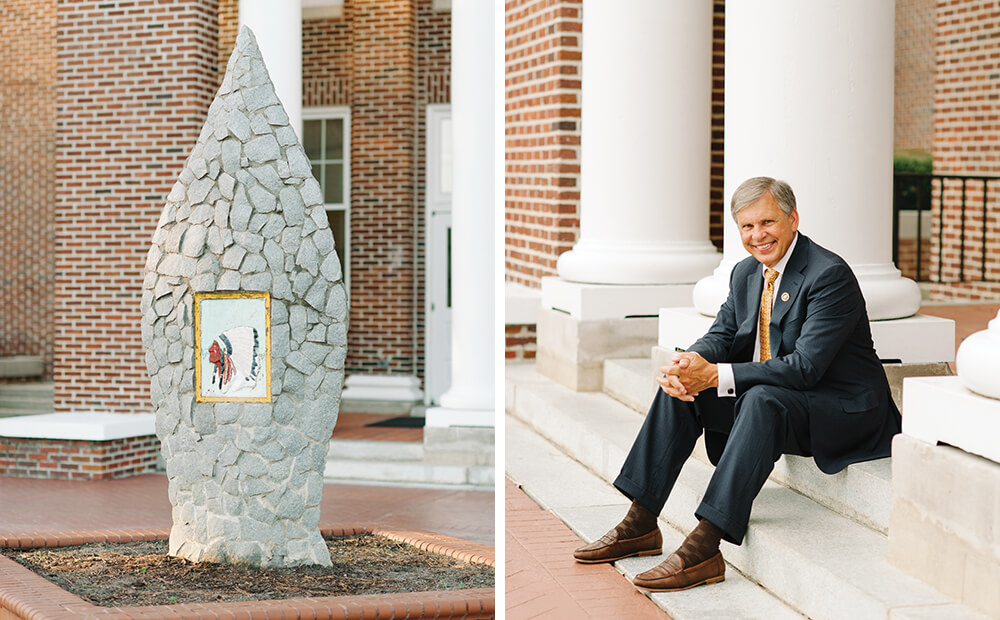 For the Lumbee tribe, largely based in Robeson County, education has always been something worth fighting for. In 1887, the first class of 15 Native American students enrolled at the University of North Carolina at Pembroke, then called Croatan Normal School. Today, the dynamic spirit of the university is embodied in the Arrowhead monument in front of Old Main. Under the leadership of its sixth chancellor, Dr. Robin Cummings — a Pembroke native, surgeon, and member of the Lumbee tribe — UNCP continues to champion education as a path to opportunity. 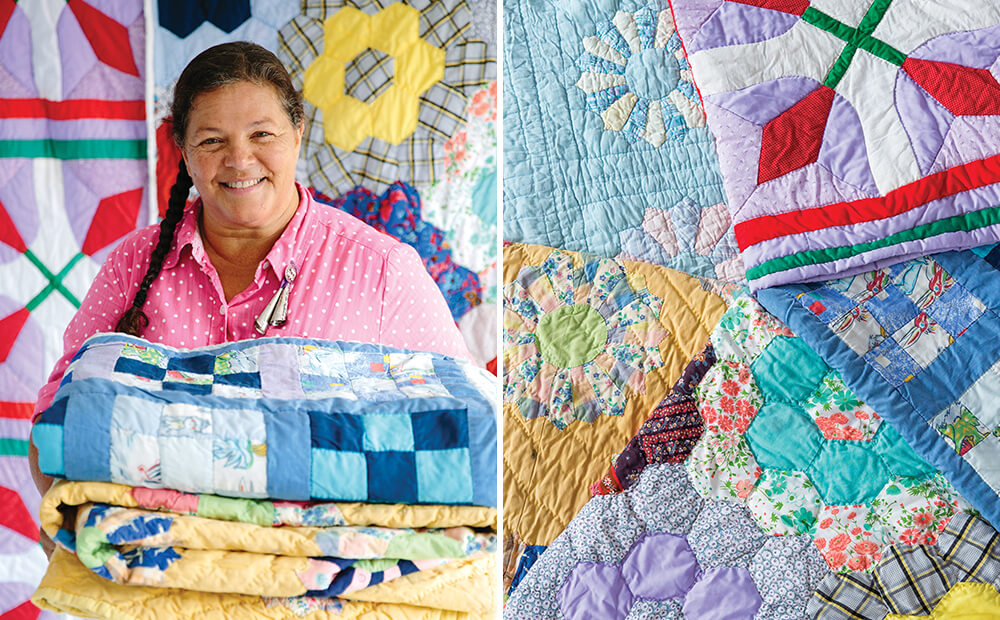 When Shelia Epps Wilson was a girl, it was her job to thread needles and pick up pins when her grandmother Jewel Epps invited friends over to quilt and swap stories. For members of the Sappony tribe in Person County, helping neighbors is deeply ingrained, and the women created quilts to honor their community’s life milestones: graduations and new babies, weddings and funerals. Decades later, when Wilson learned to quilt, she and her mother, Jean E. Williams, helped start the annual Sappony Quilting Bee on the last Saturday in January. To this day, no matter the season, Wilson sleeps under her family’s quilts, wrapping herself in their love. 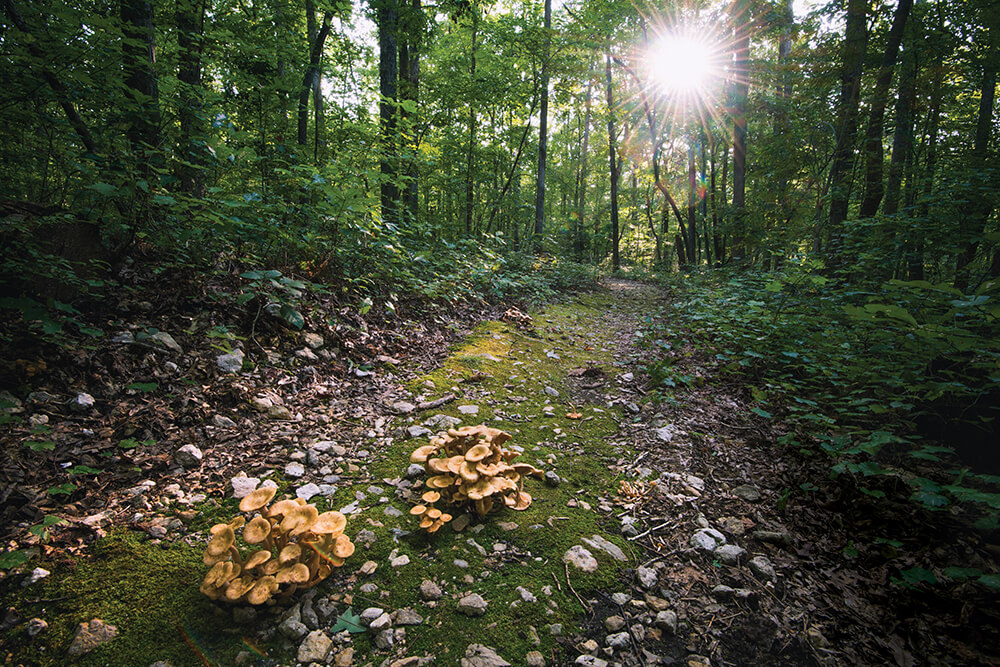 At an elevation of only 325 feet, the granite ridge at the heart of Medoc Mountain State Park is no longer really a mountain; it’s what’s left of a once-mighty range after millions of years of erosion. For the Haliwa-Saponi tribe, which takes part of its name from Halifax and Warren counties, the park is part of an area called “The Meadows,” where their ancestors set down roots in the 1700s. They hunted, fished, and farmed, building their lives on the banks of Fishing and Little Fishing creeks. Even today, most residents in the area are of Haliwa-Saponi descent, and the culture — including an annual powwow in April — is especially rich. Recently, members of the tribe have volunteered their time in the park, helping to care for the land that has sustained them for generations. 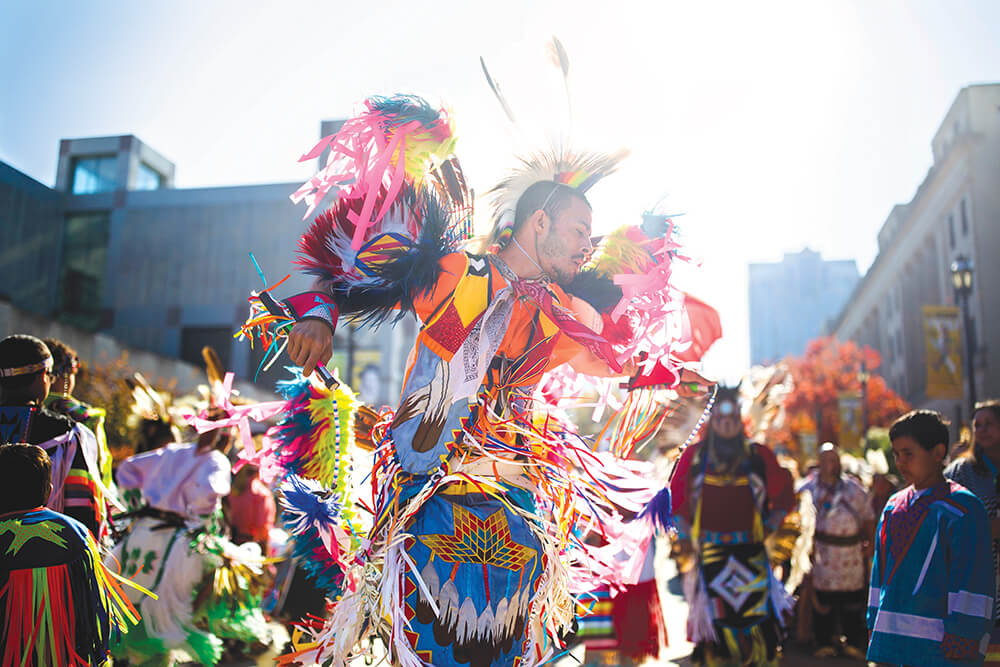 Sharing its name with two creeks and a river that flow through Sampson County, the Coharie tribe maintains a deep and abiding connection to the land where their ancestors settled. At events like the annual American Indian Heritage Celebration, held in November at the North Carolina Museum of History, the tribe shares its love of the land with others. Clinton native Gage McClenny joins dancers from all eight state-recognized tribes — plus musicians, artists, and storytellers — in filling the streets of downtown Raleigh with color and motion and years of tradition, still very much alive. 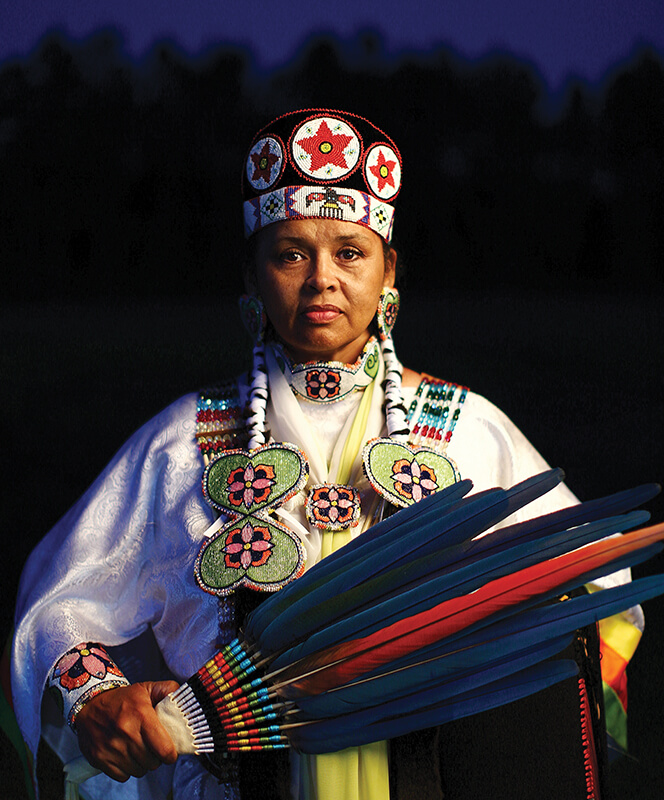 A Waccamaw Siouan legend describes a massive meteor hitting the earth, leaving a crater that filled with water. The result: Lake Waccamaw, near the tribe’s home in Columbus and Bladen counties. Ambassadors like Beverly “Bell” Jacobs (Miss Waccamaw Siouan 2015-’16) carry such stories into the wider world. Although the origin of the name “Waccamaw” is uncertain, historians believe that a Catawba children’s game called Wap-ka-hare (pronounced wahumwar and translated as “ball knock”), may hold a connection to the image of a ball of fire knocking into the earth, and to the “People of the Falling Star.” 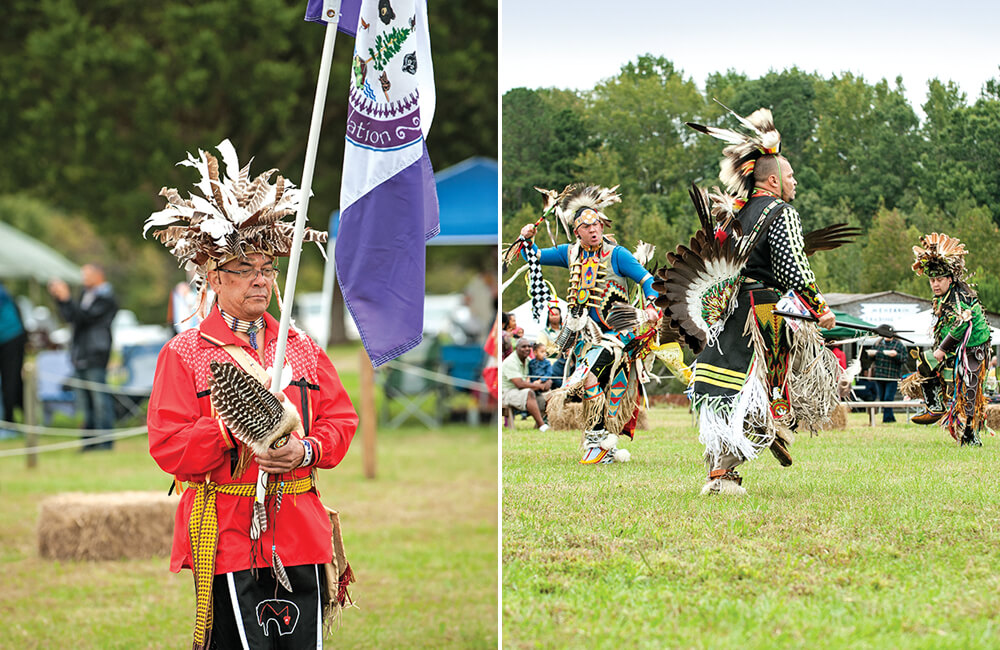 The seal of the Meherrin Nation — rendered mostly in purple and white, the colors of wampum — shows past, present, and future generations of the tribe standing in an unbroken circle. When Mike Watts (top) lifts the seal during the annual Meherrin powwow in Ahoskie, it serves as a reminder of the importance of gathering, and of passing on traditions such as the tribe’s clan system. Patrick Suarez (top right) proudly displays the symbol of his clan — a snipe — on a handmade seed-bead medallion. During the men’s traditional dance (right), a member of the Haliwa-Saponi tribe, visiting from Hollister, joins in. At the Meherrin powwow, everyone — including other tribes and members of the public — is welcomed as a friend.

Occaneechi Band of the Saponi Nation 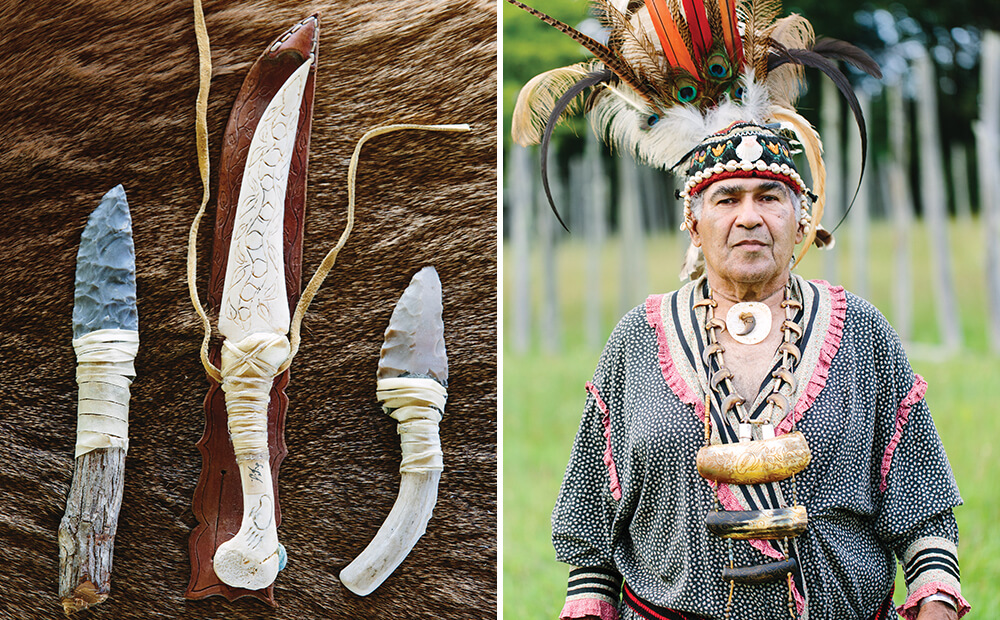 As he watched archaeologists uncover remains of the Occaneechi village in Hillsborough in the 1980s, John “Blackfeather” Jeffries was filled with mixed emotions. It was painful to see his ancestors’ graves disturbed, but the information revealed was precious, and he eventually built a replica village near the site. In 2004, the tribe bought 25 acres of former farmland in Alamance County — another Occaneechi homeland. In a small museum there, Jeffries’s handmade arrows, spears, and knives show his passion for preserving the past.