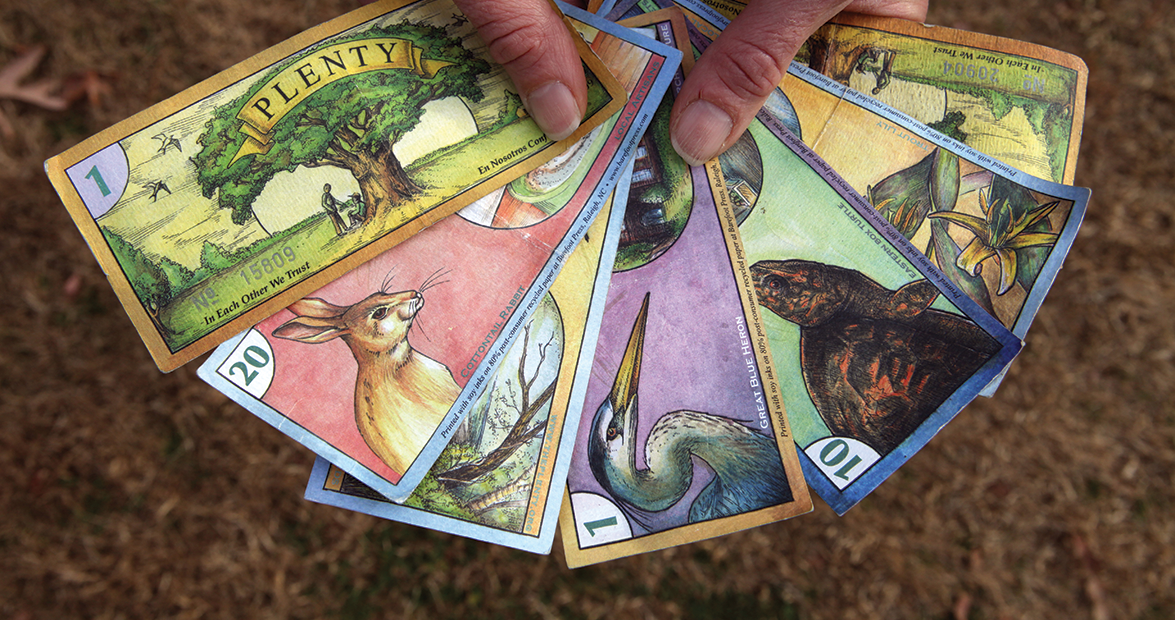 At first, the people of Pittsboro thought the money was fake. The bills were smaller than American dollars. They didn’t have fancy watermarks or portraits of white-headed men. The back of the bills contained words that seemed a little forward thinking, maybe even hippie thinking, about soy ink and recycled paper from Raleigh. The fives and ones didn’t smell like regular money, either, and everyone knows what real money smells like.

The Plenty’s scent was individualistic. This new, local currency wasn’t as distinct or in-your-face as our familiar bills. It didn’t smell as fresh as a magazine or as musty as the pages of a favorite book. It was somewhere in between.

At first, Pittsboro townsfolk looked at each other and said, “How do you know that’s a real Plenty?”

They examined the bills. They made sure the great blue herons and mill buildings were on the ones, trout lilies were on the fives, box turtles on the tens, and cottontail rabbits on the twenties. And then they turned it over, and on the front of each bill they saw a beautiful, sprawling tree canopy with a man helping his friend up from the ground, hand outstretched. The sun was setting behind them. Doves flew overhead. A barn stood nearby. And on the bottom, left-hand corner of every Plenty was a small note in bold, italic type: In Each Other We Trust.

For more than a century, most North Carolinians identified Pittsboro by its historic courthouse at the intersection of U.S. highways 64 and 15-501. Traffic loops around the building in a circle, heading west to the community college, east to Raleigh, or north to the shops and toward Chapel Hill. They knew the town for its antiques stores, too.

But in the last few years, the courthouse burned, the recession hit, and several of the 14 antiques stores closed. In 2009, CNN, Fox News, USA Today, and magazines and newspapers around the world descended upon a local bank to talk about what was happening in the Circle City.

The conversations didn’t concern the courthouse or old furniture. The media were in Pittsboro to ask questions about the local currency, the Plenty. “The stimulus for this mill town turned artist’s colony arrived in the form of green bills bearing sketches of herons, turtles and trees,” reported the Los Angeles Times in August 2009.

Only about a dozen cities in the United States have adopted their own forms of money. What initially began in Carrboro, went defunct, and made its way to Pittsboro remains strong here thanks to local support and volunteers. Capital Bank exchanges it. The Piggly-Wiggly accepts it, and so do Chatham Marketplace and Angelina’s Kitchen. You can pay your Internet bill in Plenty at Chatham Wireless. And some employers pay workers with it.

The people who live here are the kind of forward-thinking people who trust each other and take risks when they see opportunity.

“An empty building does not take the energy out of this town,” says Lyle Estill, an owner of Piedmont Biofuels and a Plenty enthusiast. “These are people who, if they see empty spaces, they fill them up.”

Just 17 miles south of Chapel Hill and 30 miles from Hillsborough, Pittsboro is a town filled with educated, affluent people who want a taste of something more rural. These people don’t like living in university towns, and they desire a less trendy vibe yet are open to being hip. They also enjoy cheaper rent and mortgages that allow them to play with the big ideas in their minds. These residents are woodworkers and farmers and travelers and diplomats. The kind of people who think for themselves. The kind of people who embrace a colorful bill as theirs.

For a decade now, Lyle Estill has been blending methanol, ethanol, and some kind of fat to make sustainable fuel for his tractor and about 400 members of his co-op, Piedmont Biofuels Cooperative. He began making his diesel in a blender after he deep-fried a turkey and noticed there was a lot of energy left in the five gallons of used oil. He had hiccups along the way, like when he blew up a 55-gallon drum of his concoction. He moved locations several times, but he’s now accustomed to a 14-acre plot of land at an environmental industrial site outside of town. He wears grease-stained clothes that smell like fish or French fries. When Estill’s son sees him, he pinches his nose. But Estill’s co-op, which consists of people running 100 percent biofuel in their vehicles, has the highest membership of any sustainable-fuel co-op on the continent.

When the Plenty started making its way to Pittsboro, Estill hoped it would work. But the original Plenty had some issues when it first launched in nearby Carrboro. No bank exchanged it, and the only place that accepted it was Weaver Street Market. At the end of the day, the market ended up with a bunch of pretty money with no place to go. No simple exchange rate existed between the bills and American dollars either. One Plenty was worth $10, then there were half-Plenties and quarter-Plenties. Gradually, Carrboro phased out the Plenty.

Then in 2008, Estill gathered some volunteers and decided to officially introduce the Plenty in Pittsboro. They set up a board, made a phone call to Barefoot Press in Raleigh, and hired a local artist to design some new bills. They printed ones, fives, tens, twenties, and fifties, just like American bills and equal in value. Estill called his friend, Poly Cohen, who was on the board at Capital Bank, and Cohen offered to help.

“I didn’t know anything about [the Plenty] until they put it in front of me,” Cohen says. “If Lyle says it will work, it will work. You’ve got to believe in Lyle.”

Capital Bank agreed to exchange the Plenty for American dollars, no fees attached. Local shopkeepers began to take it because they didn’t see any reason not to. And a once-defunct local currency was reborn. 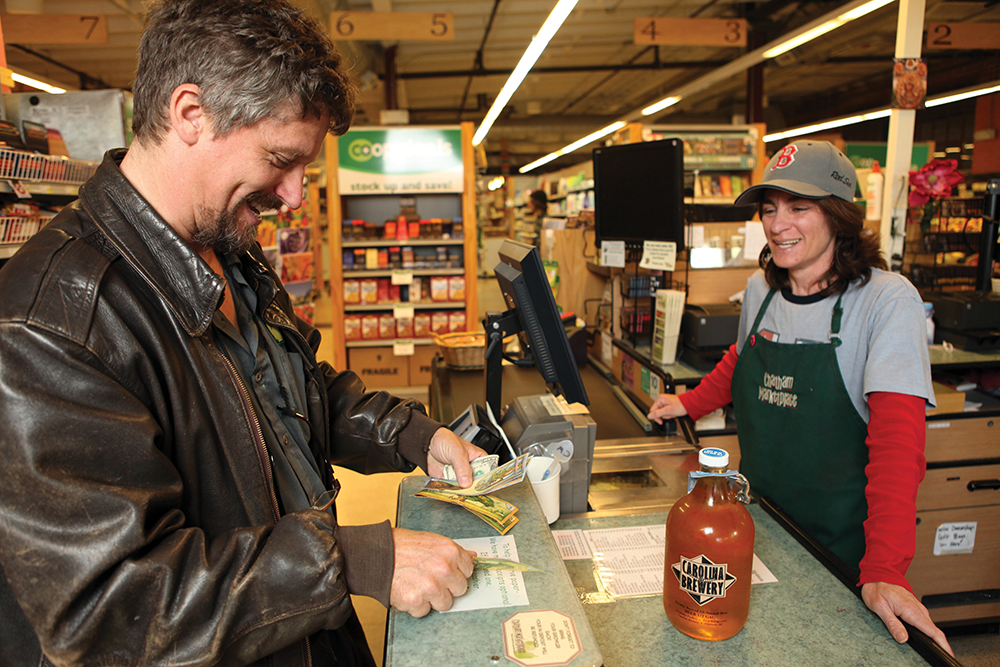 North of the courthouse on Hillsboro Street, past Roy Underhill’s Woodwright School, Virlie’s Grill, and Circle City Books, is a shop about to be devoured by giant, metal lawn ornaments. There are waist-high pink flamingos, of course, and also monkeys, horses, caterpillars, sunflowers, parrots, and spiders. Inside this place called French Connections is more art from all over the world: toy airplanes made from soda and beer cans in Africa, and colorful spools of French toile.

“What is this place, and what is it doing in Pittsboro?” everyone asks.

Store owner Wendy Dufour, a Salisbury native who was a Morehead Scholar at the University of North Carolina, met her husband, Jacques, while on scholarship in Cape Town, South Africa. Jacques was touring the country with a friend on university holiday from France. Wendy and Jacques dated long-distance for a few years, maintaining their relationship through letters; married in Salisbury (surely the most French visitors Salisbury has ever had at one time); and moved to France, then to Senegal. They had children, returned to North Carolina, chose Pittsboro, and laughed when their blond-headed, blue-eyed children went to school and marked African-American as their race.

When they bought the house and began an antiques business specializing in French merchandise, a man in a semitruck kept driving by with lawn art from Mexico. He always told Wendy, “It sure would make your place stand out,” and eventually she gave in. When she and Jacques hung their African art on the walls and people asked to buy it, they decided they should sell that, too. And when Wendy made her children’s clothes from French fabric and customers asked where those cute little outfits came from, they started selling those, too.

The recession killed businesses around them, but the Dufours survived because of their diversity. And yes, they accept the Plenty, too.

“For whatever reason,” Wendy says, “this is an area where people are allowed to try crazy ideas without opposition.”

When the Plenty relaunched, the town held a reception at Capital Bank. As Jacques walked around, he noticed a man from Le Point, a weekly news magazine in France similar to Time. The journalist interviewed the Dufours about the local currency. A week later, a friend emailed them with a link to the story and a picture of the Dufours smiling in front of French Connections. The subject of the email read, “You’re famous!”

News of the Plenty had reached 4,070 miles across the Atlantic Ocean. 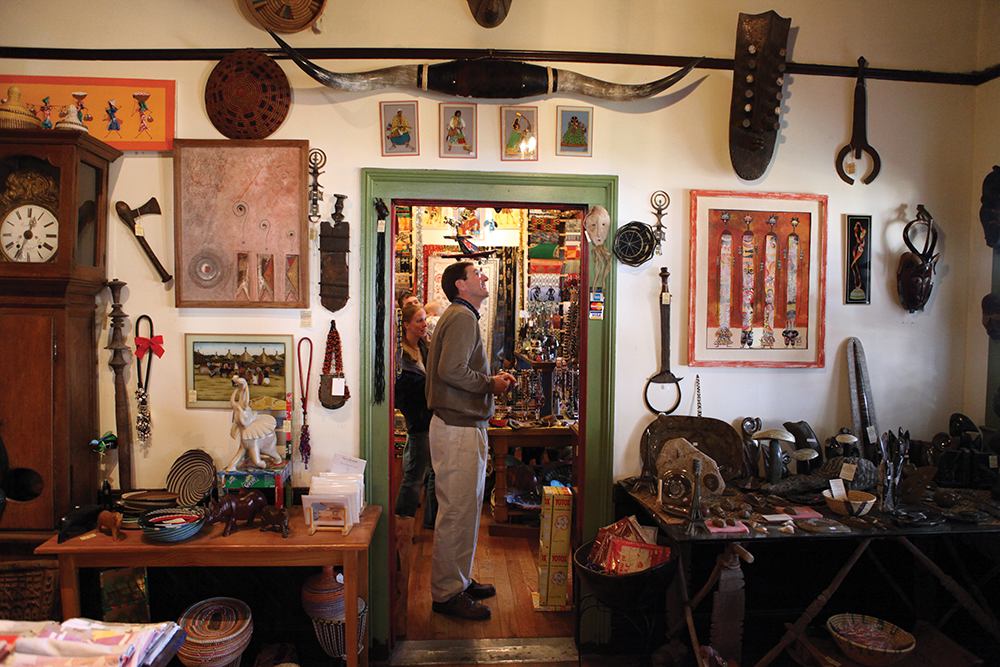 On a recent afternoon, Estill drives to Chatham Marketplace, a co-op grocery in an old mill building. The market keeps $50 worth of Plenty in each cash register. They haven’t received many Plenties lately, but they keep them stocked anyway.

Bridget Perry, a cashier and specialty buyer, sometimes asks to be paid in Plenty. When bands play in nearby Bynum, she drops Plenties in their hats. “Keeps it circulating,” she says.

Estill walks to the counter carrying a glass growler filled with beer from Carolina Brewery. He pulls out his wallet and hands Perry a small piece of paper with a large tree in the background. Perry stuffs the bill in the drawer. Later, she’ll take it to the bank, where it will wait to make another trip around town.

5 things not to miss in Pittsboro

The stories behind how these exotic animals arrived in Pittsboro are pitiful, but the animals have found a good home now. Take a guided tour and see 10 species, including Collins the pacing bobcat, Raj the chortling tiger, and Tarzan and Sheba, the lazy lions who sleep about 20 hours a day.

Most everyone likes honey and wine separately. But what about as one product? Becky and Ben Starr think it’s a good idea, so they opened this business, crafting their homemade meads for everyone. Try cranberry orange, sweet peach, and spiced apple.

Food here is simple and divine. Have the garganelli pasta with goat cheese, paired with an arugula salad filled with beets. You might have to unbutton your pants and catnap in your car, but it’s worth it.

Before you take that nap, be sure to walk to the newest bookstore in Chatham County. Opened in November, this small shop offers an outstanding literary selection with monthly readings from authors. Check out the specials on the cart outside the door, and find a great deal on a rare book.

5. The Woodwright’s School and Tool Shop

You’ll recognize his suspenders and fine handlebar mustache from his hit PBS show. Roy Underhill is a man everyone in Pittsboro knows. Visit the store upstairs from his woodworking shop for antique tools, including planes, saws, and everything else.