The Venus flytrap is an improbable plant. About the same size as a violet, it grows in loamy soil that would kill most other species. It eats ants, spiders, grasshoppers, and anything else unlucky enough to crawl between its jaws — but never the creatures that pollinate the white-petaled blooms that emerge on tender green stems from a nest of thumbnail-size open mouths. With formidable pink maws formed from delicate leaves, the Venus flytrap grows only in a tiny pocket of the planet: fewer than a dozen North Carolina counties and a sliver of South Carolina. 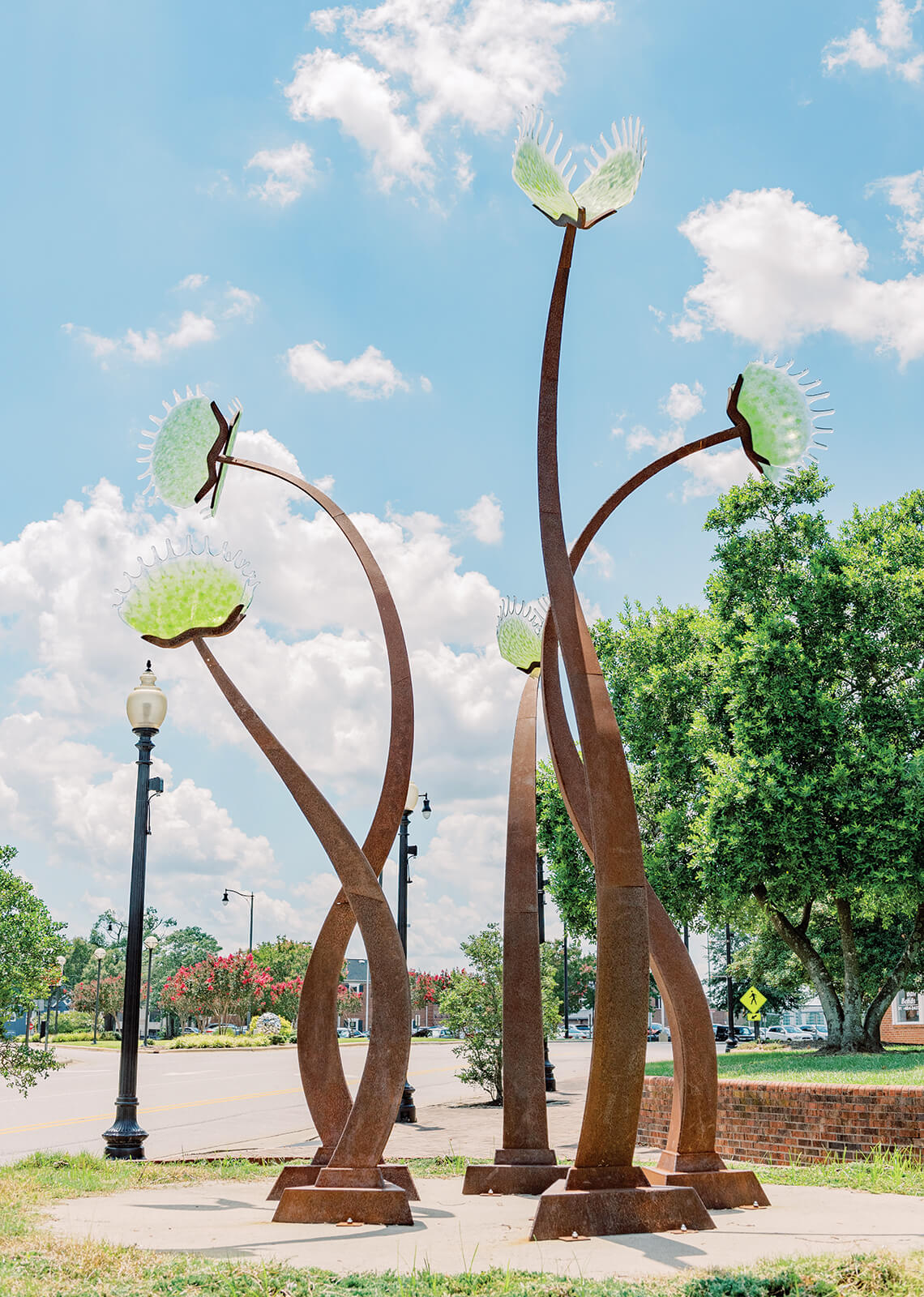 Standing 16 feet tall, with translucent green glass jaws stretching toward the heavens, the Venus flytraps that compose Natural Embrace seem ever on the lookout for their next meal. photograph by Faith Teasley

Fayetteville is one of the places where it thrives. Maybe that’s why, when Paul Hill’s towering flytrap sculpture came to visit downtown as part of the city’s rotating “Works in Progress” public art initiative, the locals fell in love. Perhaps they recognized their community in the plant’s fortitude. Or maybe its scrappiness. Either way, it was a people’s choice favorite.

Waiting to greet shoppers making their way to Fayetteville’s historic downtown, the sculpture’s glass jaws poise open atop five long, steel stems. The heads bow in every direction from the Person Street Plaza, each sharing a toothy, hopeful grin.

The flytrap heads bow in every direction, each sharing a toothy, hopeful grin.

One of a dozen or so sculptures that cycle through Fayetteville’s downtown every year, Hill’s Natural Embrace was destined to ship out at the end of 2018. Instead, residents banded together to keep it stationed at the historic courthouse.

Fayetteville folks called their grassroots campaign “Help Me Stay Planted Here.” They needed $20,000 to keep the sculpture; they ultimately raised more than $26,000. The arts council matched the citizens’ funds, and Natural Embrace found its forever home.

Though one of North Carolina’s oldest cities, Fayetteville is home to many new residents — families who come here to work and live at Fort Bragg’s Army base. Hill also came to North Carolina from someplace else. Originally from Tyler, Texas, he moved to Wrightsville Beach to practice his art almost 30 years ago.

“A job pulled me here initially,” Hill says. A friend wanted him to paint graphics around his surf and sail shop. Once Hill got here, he realized that North Carolina felt like home. “North Carolina expanded my art,” he says. “It’s given me more freedom of mind. I feel good being here. And I think this reflects in my art.”

This sense of autonomy and inventiveness shines through in Hill’s current art, industrial-but-representational steel sculptures. 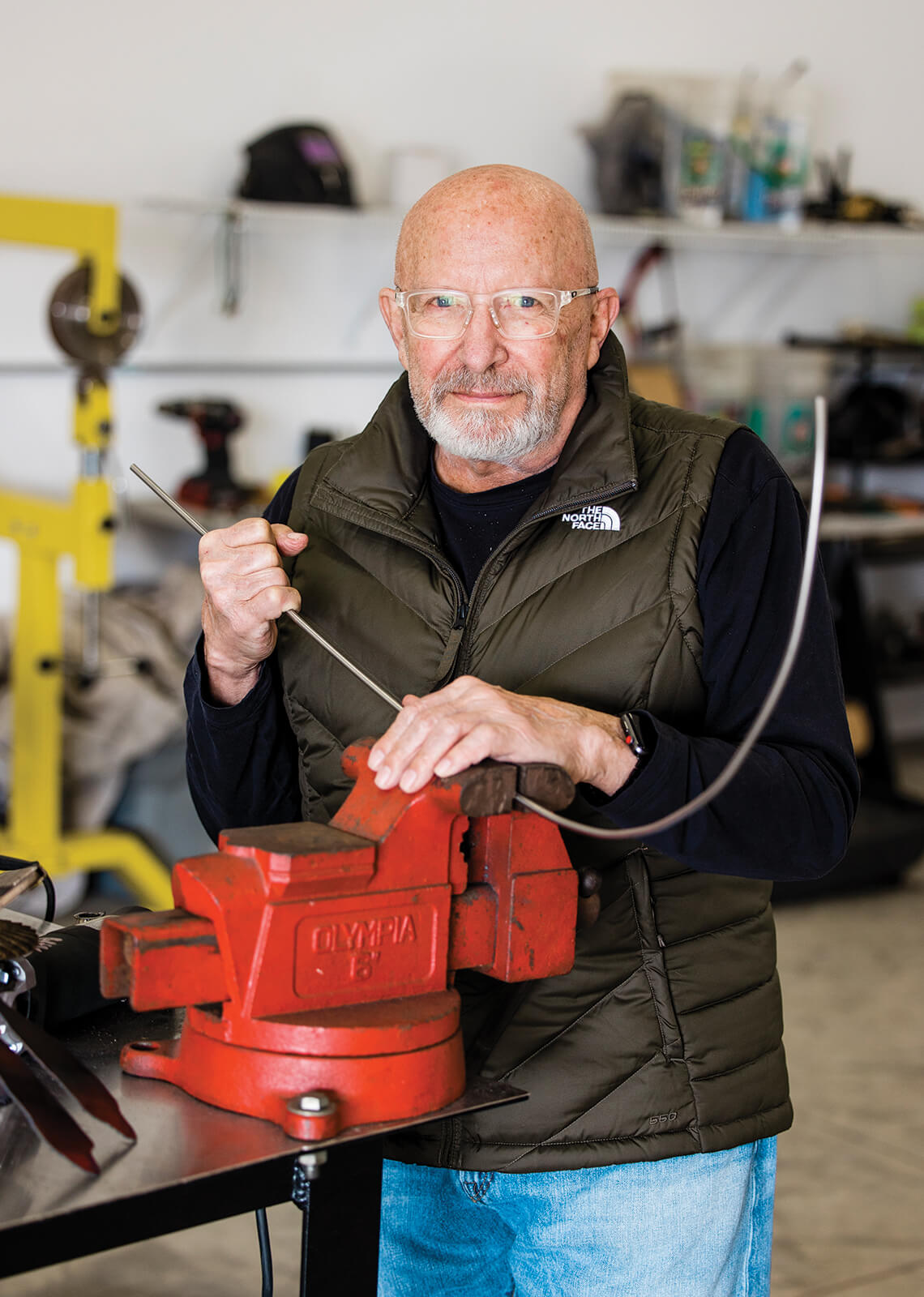 The steel and mixed media sculptures that artist Paul Hill creates in his Wilmington studio can be found along the East Coast and across North Carolina. photograph by Matt Ray Photography

Today, you can spot Hill’s sculptures across the state, in homes, town centers, and airports. In Wilmington, where he lives, a second flytrap sculpture, Southern Hospitality, snaps its glass jaws at the downtown sky. In Fayetteville, some will remember his hopeful For No Apparent Reason goat that peered from its perch atop a slender, 16-foot curve on the corner of Hay and St. Maxwell streets. His sleek Courage piece at the North Carolina Veterans Park that was constructed from recycled military equipment.

Hill builds his animal sculptures like one would build a living being, complete with a skeleton, organs, and flesh. To construct Natural Embrace, he started with an armature made from steel. Then he sketched the flytrap shapes on paper and cut them out of steel, like a dressmaker cutting fabric. In this case, the dress would become the sculpture’s “skin.”

While real flytraps only poke their jaws a few inches above the dirt, Natural Embrace’s five hand-formed steel stems grow up to 16 feet tall. Instead of using steel for the mouth leaves, Hill topped Natural Embrace with green glass.

“I made a mold for the jaws, and an artist named Stan Harmon in Morehead City poured glass to create the flytraps for me,” he explains. These traps capture sunshine instead of insects. “The flytraps look so proud, and when you see them catch the setting sun through them, it’s just lovely.”

Venus flytraps thrive from fire. They grow best in places that burn every now and again, where the life they held helps rebuild the nature of their homes. Fayetteville, too, seems to bloom from destruction. The place was settled by Scots, burned to the ground, and then rebuilt — only to have Sherman trample it in his march southward. Fort Bragg grew in farmers’ fields from the overseas devastation of World War I, and it continues to grow alongside Fayetteville, which always manages to come back, to take root where roots seem impossible.

Flytraps can grow in this small patch of the planet because this is the singular place on earth where conditions are just right for a small plant to need jaws. Fertile soils that would allow other plants to flourish would kill a Venus flytrap. Accustomed to austerity, their jaws snag the nourishment they need. They have adapted to the most specific of conditions: our bogs and combustible forests, our muggy summer days, and our abundant insects. In doing so, they have become uniquely ours — like Fayetteville, shaped by circumstance, with a strange strength that comes from fragility.