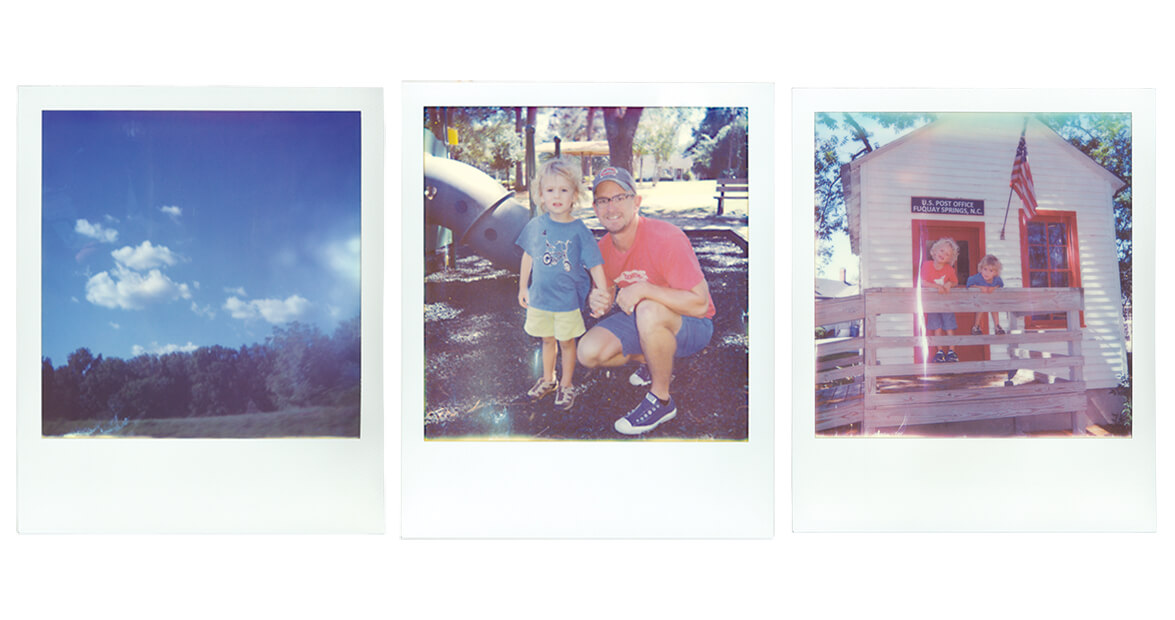 We take the back roads, so we drive right by Harris Lake and the Shearon Harris nuclear facility, with its gently dire warning signs and blue evacuation route postings. All that feels shot through more with nostalgia than dread, though, because the behemoth cooling tower complements, in a surprisingly well-suited way, the music of the Polaroid instant camera in the back seat. We’re headed for Fuquay-Varina: My wife is in search of mid-century furniture and has a line on a shop there. Sure, we’ll come along, I say. Cleaning a closet recently, I found the Polaroid camera that guests passed around at our wedding, and I bought some film for our boys, ages 6 and 3, to try out. Today’s trip seemed as good a time as any.

My sons are growing up in a time of digital wonder. When I was their age, the Polaroid camera seemed an absolute miracle; now, when we can download their favorite TV shows in an instant, an instant photograph seems not so astonishing. In fact, when I first showed him the camera, my older son, The Toad, regarded the machine with suspicion. I tried to explain how it worked. He bored quickly. “Show me a video of a tornado on your phone,” he said.

But now, because the trip has already turned sour, the kids kicking each other and lodging various complaints, we’ve loaded film in the camera and passed it into the back seat. And suddenly: glee. Agreement. Turn-taking. And that sound: a clicking, a grinding, a whir, and out comes the picture — which they want to see right away, but somehow summon patience from well within themselves, an ability I had no idea they possessed. The quiet waiting for the picture is as inconceivable as nuclear power itself.

The boys take pictures of trees. Of Jordan Lake, when we pass it. Of the back of my headrest. Of each other. We only have so much film, I tell them. They take more pictures. We land in Fuquay-Varina. Put in more film, they beg. Let’s look at furniture first, I say, which I know, even as I say it, is a failing, lunatic proposition. Let’s go across the street instead, I say, where, rising up out of a parking lot, there seems to be a museum. With a playground. Their mom can look at coffee tables in peace. These boys have more pictures to take.

We’ve stumbled on the Fuquay-Varina Museums Complex, which has a two-room schoolhouse, a tobacco barn, and Fuquay Springs’ first post office. The boys run wild through this history, stopping occasionally so that my younger son, The Wee, can take a picture, largely failing to keep his brother in the frame. Metaphors abound in Fuquay-Varina.

We take a break before we load the last of the film. I try to explain that after this, there will be none left. “We’ll be out of foam,” The Wee says. Or maybe he says “folm”? I ask him to say it again, and he does, but a nascent North Carolina accent keeps me from knowing which it is. I ask him who he wants in his next picture. He can have any of us, I tell him, and he chooses his brother. I ask The Toad who he wants in his next shot. He misunderstands. “I’ll be a copperhead driving a Coast Guard helicopter,” he says. My sons: one literalist, one fabulist.

On our drive home, I try to get them to wait for interesting things out the window — silos and signs and buildings — but they fire the camera indiscriminately. Only three pictures left, I tell them. Then two, then one, and then: no more. That night, I spread the photographs across the kitchen table. Some are great. Some are of nothing. All of them are blown out in that perfect, damaged Polaroid way. I see, almost right away, what the problem might have been, why they couldn’t hold for any one thing. It’s so plain: They see everything. Everything’s important. Everything matters. It’s all new. Their whole world, their whole lives: instant energy, barely harnessed, one way or another.