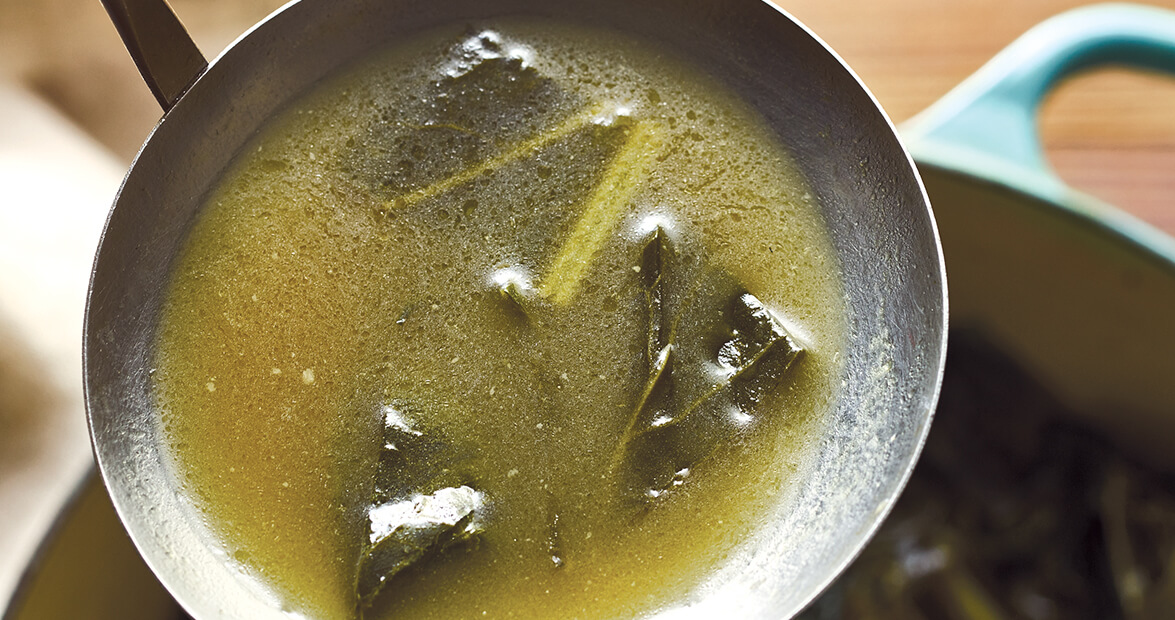 To say that potlikker is broth is like saying that wedding cake is dessert. It isn’t wrong, but it’s not right, either.

Potlikker is the delicious, highly concentrated, vitamin-filled soup that develops as sturdy, leafy greens simmer in well-seasoned cooking liquid. Or, as one connoisseur put it, “Potlikker is the residue that remains from the commingling, heating, and evaporation — anyway, it is in the bottom of the pot.”

And yes, it is spelled potlikker, not pot liquor. This humble food of even humbler origins does not put on airs. Potlikker is what enslaved and indentured cooks — who stirred pots from which they could not eat — had left over at the end of the day. Potlikker kept people going. There are stories of motherless babies with potlikker in their bottles, and of granny women and country doctors prescribing a vigorous rubdown with potlikker as a remedy for aches and pains, from croup to rabies to nervous exhaustion — an inner and outer cure. Potlikker is demonstrably nutritious, and can adjust attitudes, as well. I cannot imagine anyone finishing a bowl of potlikker and cornbread and not feeling better for it. People who love greens often love potlikker even more, getting all emotional over it. As my friend Ruth Moose wrote, “Nothing meets you halfway like potlikker.”

Making a proper pot of greens and potlikker is a deliberate art in which two things are certain: The greens must be sturdy, and the cooking liquid must be richly flavored and smoky. Beyond that, there are choices. Some people add heat to their greens with pepper pods, crushed red pepper flakes, ground cayenne, hot pepper vinegar, or some combination of these things. Some people temper the bitterness of their greens with a little (or a lot of) sugar, cane syrup, or sorghum. Go with what you know and crave. Even when the greens are seasoned thoughtfully by a gifted cook, eaters appreciate bottles of vinegar or hot sauce on the table.

Potlikker should be served with cornbread in some form that is suitable for sopping: big pones, flitters, fritters, hoecakes, or dumplings. On this we can agree, or you’d think we could. Among the top news stories in the nation in February and March of 1931 was when two long-winded and high-minded men (one a Georgia newspaper editor and the other a Louisiana senator) debated and impugned one another over whether the cornbread should be crumbled or dunked into potlikker. This did not occur in North Carolina, but perhaps we Tar Heels were content to stay above the fracas because we grow cabbage collards and other states aren’t known for doing so. So we’ve got that going for us.

I’ve loved greens since I was a kid, cutting my teeth on the pungent mustard my grandparents raised in their Watauga County garden, but I confess that I didn’t get serious about potlikker until I was grown. I’ve tried to compensate for that developmental delay by sharing my recipe in cookbooks and cooking classes.

A few years ago I was teaching a class in which a well-meaning assistant (“from off,” as we’d say in the mountains) strained the greens out of the huge pot that I’d lovingly assembled and simmered for hours, and then poured the potlikker down the drain. When I saw this out of the corner of my eye, I cried out, “Noooo. That’s the best part!” But not a single drop was saved. When I asked the assistant why, she said, “It looked swampy.”

You can lead a body to potlikker, but you can’t make them dunk.