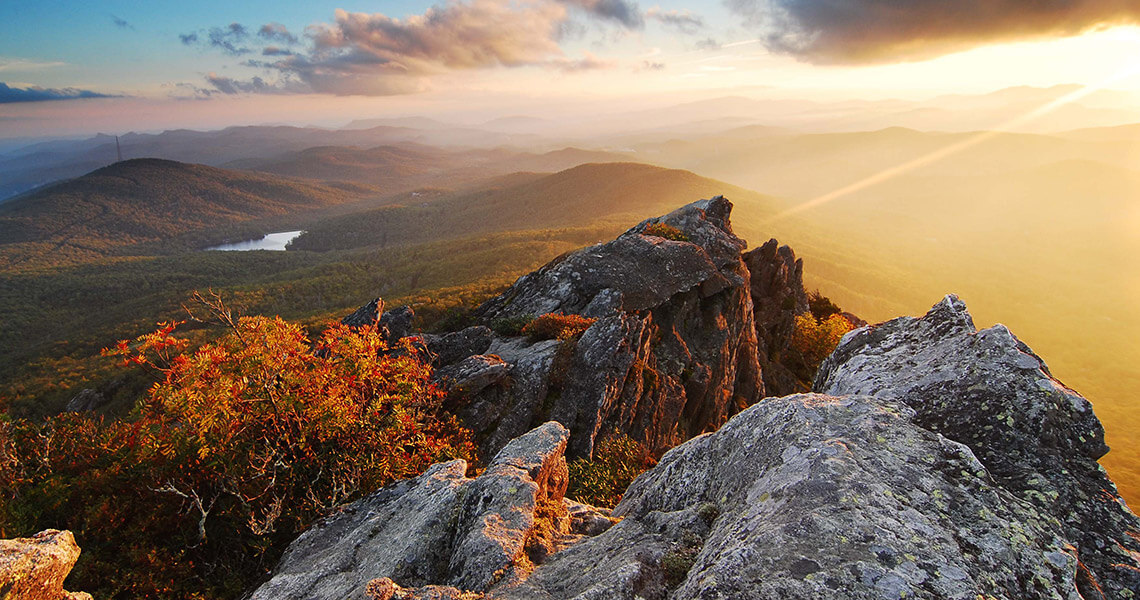 It’s been a full day in the woods on Grandfather Mountain, and H Patton III is headed out of the backcountry, his pack bulging with nets, scopes, wooden boxes, and notebooks. He’s tired and dirty. But when a group of passing hikers asks, “What’s with all the gear?” he falls in step with a smile. This is just the opening he’s been waiting for. 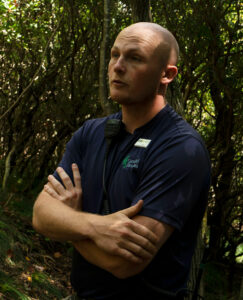 Patton is an educator at heart, his love of teaching as deep as Grandfather Mountain is high. “Promoting conservation — it’s something we all share here, from the education staff to the natural resource staff to the restaurant staff,” explains the natural resource management specialist. He’s part of The Grandfather Mountain Stewardship Foundation, the nonprofit that owns and runs a 750-acre portion of the beloved western North Carolina destination, including the Mile High Swinging Bridge, the wildlife habitats, and the Wilson Center for Nature Discovery.

The Foundation’s mission is to teach wonder and to kindle curiosity about the ancient, rugged, brimming-with-life landscape of Grandfather Mountain. Its mission is rooted in the belief that exploring, understanding, and valuing the mountain’s wonders will inspire people to protect it.

It’s a place that needs protecting. Don’t be fooled by the towering cliffs and fierce weather that make it seem immortal. Grandfather Mountain may be hundreds of millions of years old, but it’s also a unique microclimate: Its soil types, moisture levels, and weather all differ from the surrounding areas, with a regular temperature difference of 10 to 15 degrees.

With temperatures rising, that microclimate is changing. And like all changes in nature, there’s no way to silo the impact: The air, soil, flora, and fauna are all interconnected. The ecosystem is constantly in a delicate balance, and much of the unique plant and animal life on the mountain is at risk of extinction. 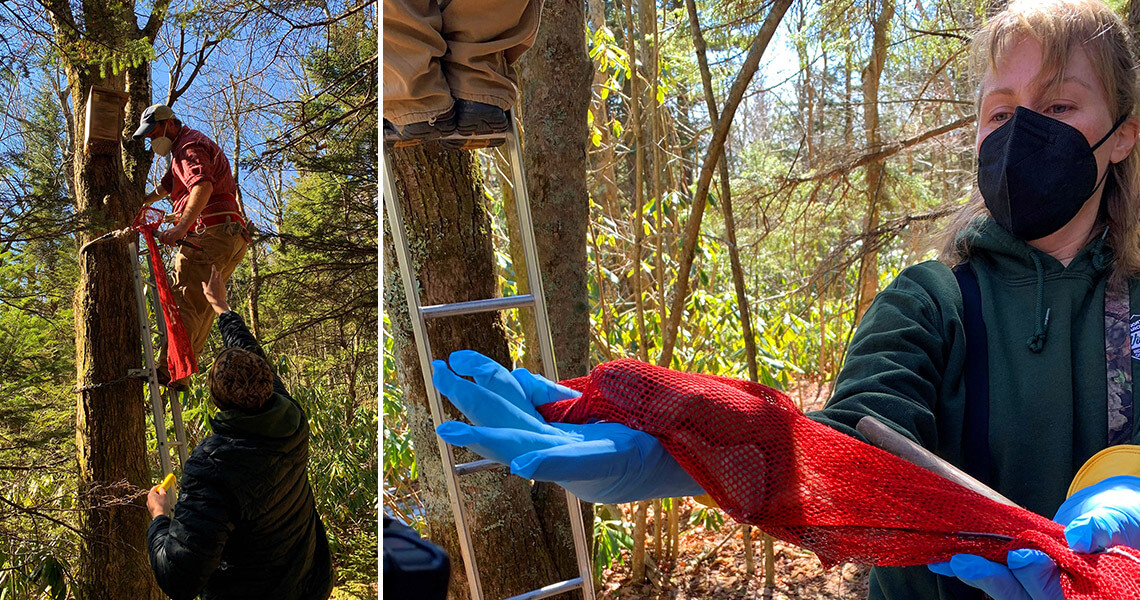 Thankfully, the Foundation’s natural resource management team is determined that Grandfather Mountain’s threatened species will thrive — from mighty peregrine falcons to lowly rock gnome lichen. Along with their partners at Grandfather Mountain State Park, the North Carolina Wildlife Resources Commission, and many other conservation agencies and organizations, they keep a close eye on the mountain’s many endangered species, doing regular check-ins, gathering detailed data, and teaching guests about how they can help with conservation efforts.

The work, says Patton, requires a big-picture mindset. “It’s not just about any one animal or even any one endangered species — it’s about how it affects the whole ecosystem,” he explains. “If you lose one piece, you can’t replace it.” 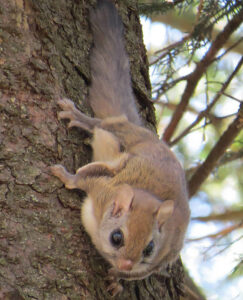 The Carolina northern flying squirrel thrives at the foot of red spruce and Fraser fir trees. photograph by Clifton Avery

Take, for example, the Carolina northern flying squirrel. These unassuming, nocturnal creatures are so critical to the Southern Appalachian spruce-fir forest blanketing Grandfather Mountain that they’re called an “indicator species.” In other words, their health points to the health of the whole ecosystem — one of the rarest ecological communities on the continent.

A closer look at these gliding mammals shows why their presence tells a bigger story. The Carolina northern flying squirrel eats mainly truffles — a fungus that thrives at the foot of red spruce and Fraser fir trees, the squirrel’s preferred habitat. With increasing temperatures, red spruce and Fraser fir trees are dying out and hardwoods are taking over. That means fewer truffles and less habitat for the squirrel, and unknown consequences for countless other organisms as well. If the Carolina northern flying squirrel is on the brink, the rest of the ecosystem is too.

In response, the Foundation’s natural resource technicians are planting red spruce and Fraser fir saplings in an old powerline cut and putting up squirrel boxes for nesting or temporary housing. They tromp out in the backcountry each winter to survey nesting sites, braving early mornings, heavy packs, frigid winds, and knee-deep snow drifts to gather data on the squirrels and measure their health.

And, of course, they spread the word to guests. At Grandfather Mountain, conservation always circles back to education.

Working to protect endangered species isn’t enough: In ecosystem conservation, you have to play both offense and defense. “Invasive species are good at what they do, and what they do is wreak havoc,” Patton explains.

One current culprit on Grandfather Mountain is garlic mustard, an invasive flowering plant that spreads quickly, germinates early, and steals nutrients and light from native plants. “If you don’t remove it effectively, you get a monoculture of garlic mustard under your canopies. You lose diversity,” he says. “And that’s the beginning of the end of an ecosystem.”

Because the Stewardship Foundation wants to minimize the use of herbicides, they have to pick the garlic mustard by hand. This year, they’ve pulled up around 1,080 gallons. It’s a grueling job for Patton and his team, but an essential one to maintain the diversity that keeps Grandfather Mountain thriving. 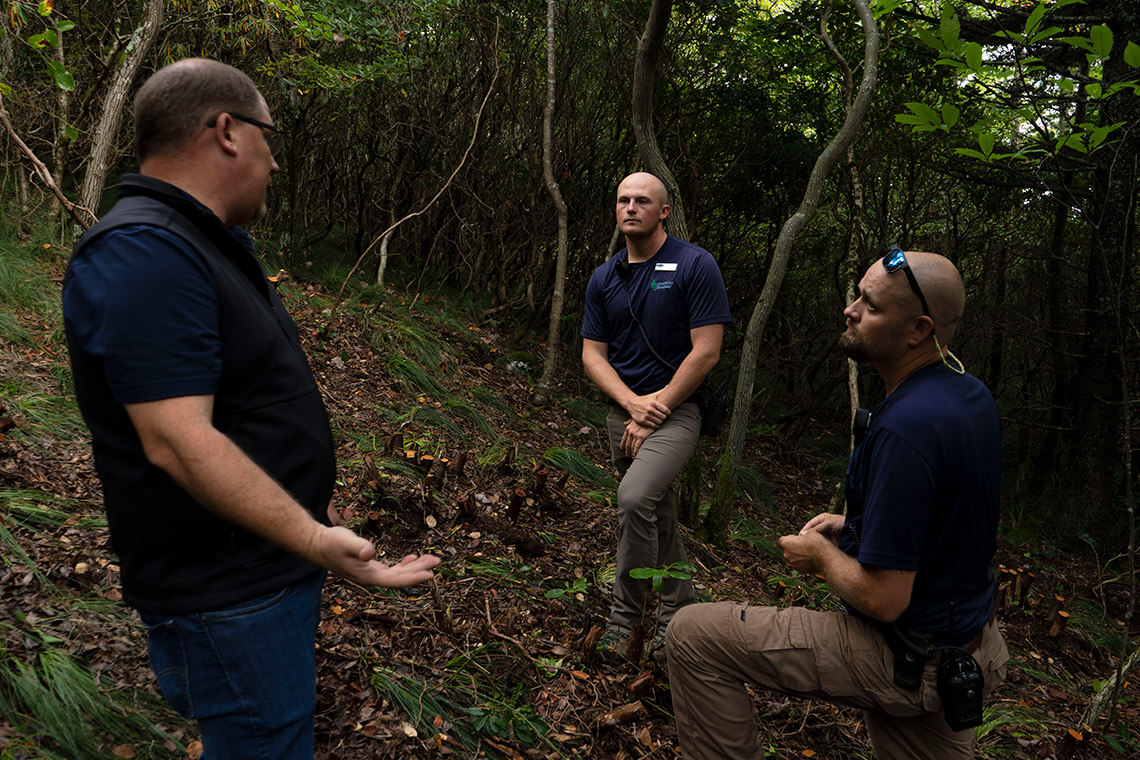 What would happen if they allowed the future to take its course on the mountain — if they allowed invasive plants to encroach and stopped protecting endangered species? Patton says the mountain would be unrecognizable in a decade. “You know that Christmas tree smell in your nose that you get on Grandfather Trail? That would be gone,” he says. “Invasive plants would shade out the spruce and fir saplings, and it would just be dominos from there.” The work of Patton and his team is preventing near-certain habitat and species loss on the beloved mountain. And in doing so, they’re also preserving possibility. 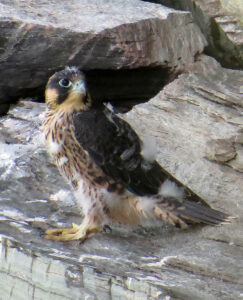 For most visitors to Grandfather Mountain, a peregrine is a rare but special sight. photograph by Clifton Avery

Are there species on Grandfather waiting to be discovered? Almost certainly. Medical cures tucked in the underbrush? It’s possible. No one knows all the secrets the mountain may hold. “We protect this ecosystem in part because we can’t possibly imagine all the opportunities we may miss if it disappeared,” Patton says. The Grandfather Mountain Stewardship Foundation is on a mission to make sure Grandfather’s delicate ecosystem thrives into the future — whatever the future may hold.

Back on the trail, Patton pulls out his scope, and the hikers get a rare peek at a peregrine falcon. There’s a gasp, and then a shower of questions:

It’s the sound of wonder doing its job, inspiring the next generation of conservationists at Grandfather Mountain. Patton answers questions and heads on down the trail, knowing his work here is done. The Mountain — with its wonders around every corner — will take care of the rest.