It’s not yet noon, and Susan Owen is already on her front porch, singing about pawpaws, North America’s largest edible fruit. And she’s dancing, swooping her arms low, as if she’s harvesting an invisible bounty. The folk song she’s belting is one that her mother taught her: “Where, oh, where is pretty little Susie? Way down yonder in the pawpaw patch. Picking up pawpaws, putting them in her basket.” 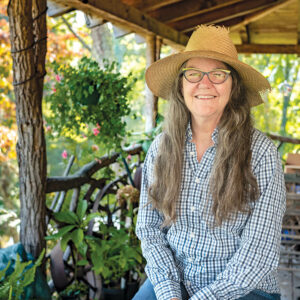 As she pantomimes the lyrics, Owen is careful not to bump into the treasures that crowd the porch of her log cabin: remnants of her blacksmith work, an antique sewing machine, just-picked heirloom peppers of a variety that she’s chosen to grow because of their heart shape. The cabin itself belongs in an antiques collection. It’s a roughly 200-year-old building that she moved from the other side of Watauga County when development threatened. Owen is like some sort of mountain-home Midas — everything she touches turns to art.

On this particular morning, she’s serenading the mountains around Vilas, just shy of the Tennessee line. Back when Owen learned the tune she’s singing, she’d never even seen a pawpaw. “Every time we sang this,” she recalls, “I’d say, ‘Mama, what’s a pawpaw?’ and she’d say, ‘I don’t really know.’ Back then, we didn’t have Google, so we never did find out.”

Years passed. Owen grew up in Winston-Salem, but she dreamed of living in Appalachia. When she was a teenager, she wrote an essay explaining where she saw herself later in life, and she remembers a college counselor telling her: You can’t live in a cabin, on a farm, in the mountains! You need to be a CEO or something. “I didn’t come from farming stock,” Owen says. “People thought that essay was a pipe dream.”

She went on to study art education in college. But after graduation, she dedicated decades to tending medicinal herbs, flowers, and bees on 42 acres of Appalachian holler and slope that she named The Lily Patch Farm. In the late 1990s, she attended an event where she met a man selling pencil-size saplings labeled as pawpaws. Given her childhood association with the old folk song, it was like meeting someone peddling magic beans. “Are those really pawpaws?” Owen asked. The man assured her that they were, and he advised that she’d need to take at least two to ensure cross-pollination. She left with three. 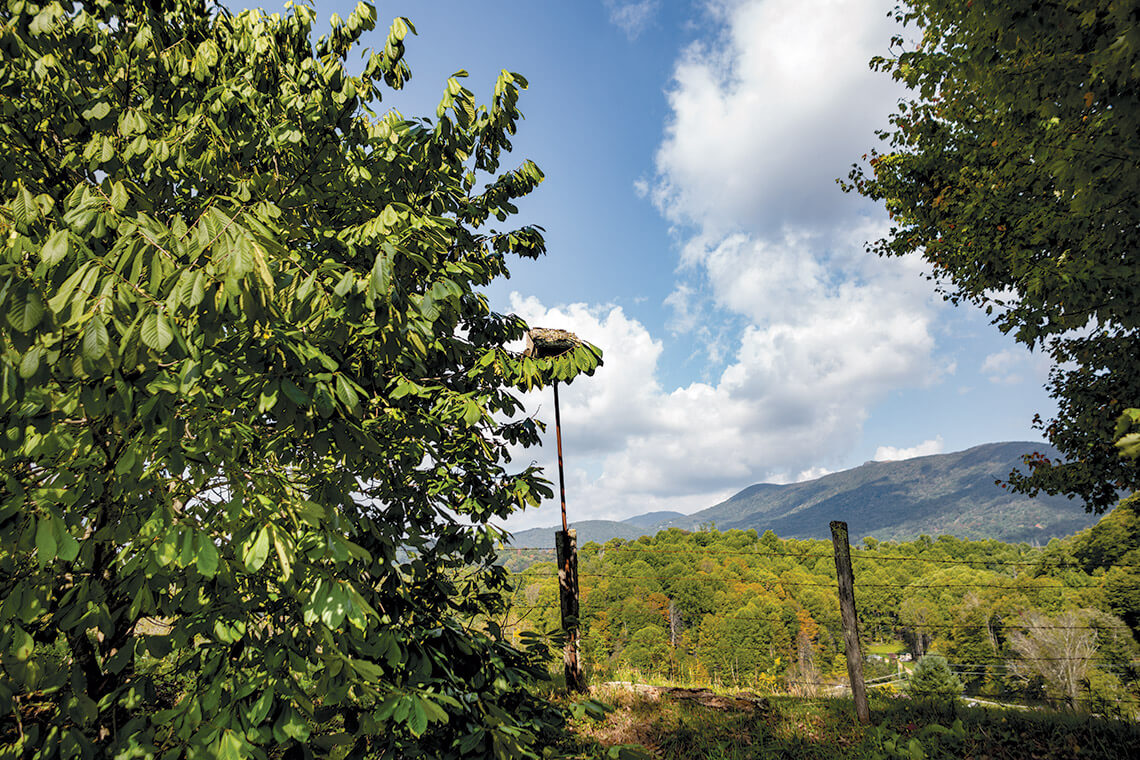 From her porch, Owen can look out at her native pawpaw trees and beyond to the mountains that frame her Lily Patch Farm. photograph by Charles Harris

For a long time after she planted those saplings on a hillside next to her cabin, Owen didn’t think much about them. Pawpaw trees can take up to eight years to start bearing fruit. When that eventually happened, her curiosity was piqued. “We have Google now,” Owen says, “so I started reading about pawpaws.” And once she started, she couldn’t stop.

She discovered that Thomas Jefferson grew them. John James Audubon drew them. And they were rumored to have been George Washington’s favorite dessert. Pawpaws are native to most of the eastern United States and parts of Canada, and they have, historically, been beloved in Appalachia. Yet between the time that traditional folk song was written and when Owen learned it, the fruit had fallen out of favor.

Pawpaws are, in many ways, a challenging crop for a farmer to champion. They’re difficult to transport. They need to ripen on the tree. Pawpaws don’t translate into an industrial agricultural model, and that’s part of why local pawpaw patches were neglected as produce was increasingly bulk-grown and shipped. But Owen — now CEO of her own farm, headquartered in her mountain cabin — has a soft spot for outliers and improbable paths. “All it takes for me to accomplish something,” she says, “is to have someone tell me that it cannot be done.”

Around the time that Owen planted her first sapling, pawpaws were experiencing their own creative renaissance, with related festivals popping up along the East Coast. Before long, she’d attended a string of them. She subsequently secured grants to research pawpaws, traveling to places like Kentucky State University, which claims the only full-time pawpaw research program on Earth. Ultimately, she worked her way onto stages as a speaker, sharing her enthusiasm with attendees from as far away as Germany and Korea.

It was at one of those events that Owen found herself surrounded by a group of men pontificating on the value of cultivars — pawpaws bred for size and other attributes, such as taste — over natives. “I know y’all are about bigger and better,” she told them. “But there’s something to be said for native plants.” Still, she was intrigued by the different flavor profiles of the cultivars. One of the men in particular, Neal Peterson, caught her attention. Peterson, whose trademark cultivars are legendary, has only granted licenses to a handful of nurseries in the country, allowing them to sell his varieties. After some cajoling, Owen’s farm is now one of them.

In recent years, she has found success as a pawpaw cheerleader, particularly in the High Country. Like many enthusiasts, she thought that freezing pawpaw pulp might be a way to share them with a wider audience. Now, with Owen’s fruit, Appalachian Mountain Brewery makes pawpaw beer; the aptly named Over Yonder restaurant, in Valle Crucis, has whipped up pawpaw pudding; and Boone’s Lost Province Brewing Co. uses the fruit for sorbet. Each of these culinary creations began on The Lily Patch Farm and ended with explosions of flavor on the tongues of people — some of whom, like Owen, had been singing about pawpaws all their lives without ever having tasted one.

Owen walks over to the hillside where her original, native trees are growing. When she reaches into the shade of the branches, fruit falls into her hand. She loves pawpaw ice cream. Pawpaw cheesecake might be her favorite baked good. But there’s nothing that she loves more than a fresh pawpaw, straight from the tree. “When it comes to snacking,” she says, “natives are the perfect size.”

She scores its skin with the edge of her fingernail, revealing a soft interior the color of heavy cream. She gently squeezes, and fruit comes out of the halved skin like a push-up pop. The pawpaw’s giant seeds are as slick as the interior of muscadine skin, and — thinking ahead to future planting seasons — she keeps every one of them.

Owen describes the flavor of pawpaws as a hybrid of pineapple, banana, and mango, but adds, “To me, a pawpaw tastes like a pawpaw.” It has the consistency of custard and a hint of something tropical — or, rather, temperate, like the temperate rain forests of Appalachia. “These trees were around in the Pliocene, when mastodons were roaming,” she says. Even their pollination process seems a relic. It’s not carried out by bees and butterflies; it’s dependent on flies and beetles.

“The way I see it, farming is about paying attention to details, and details delight me,” Owen says. “I’m always on the lookout for itty-bitty bugs.” Not long ago, she was standing in this very spot when she spotted a flash of black and white. It was a zebra swallowtail butterfly. Just as monarchs lay their eggs on milkweed, zebra swallowtails are dependent on pawpaw leaves. “I was so excited to see that butterfly, I didn’t know what to do with myself,” she says. “Finally, I ran inside to get my camera. But by the time I got back out here, it was gone.”

The beauty of zebra swallowtails — like the pawpaw harvest season, which lasts only a few weeks each year — is fleeting. “I don’t have a photo to prove it,” she says. “But I’m telling you, there are zebras living here, all because of the pawpaw trees.”

Owen opens the screen door of her cabin and grabs a hat from the deer antlers that act as her coatrack. Then she starts walking — down yonder, into a holler, past outbuildings and garden beds. The gravel road has switchbacks. But Owen doesn’t slow for curves.

She walks through a small forested area, and the canopy opens to reveal her main pawpaw orchard. Many of the trees are less than half the size of her original plantings, although they’re old enough to fruit. “Aren’t they cute!” she exclaims, joyfully clapping her hands at the sight of them. The trees — cultivars — are planted in rows. She started with 30; now she has 60 and will eventually add a hundred or more. But first, there’s fruit to process. What’s not sold fresh will be frozen as pulp for distribution. 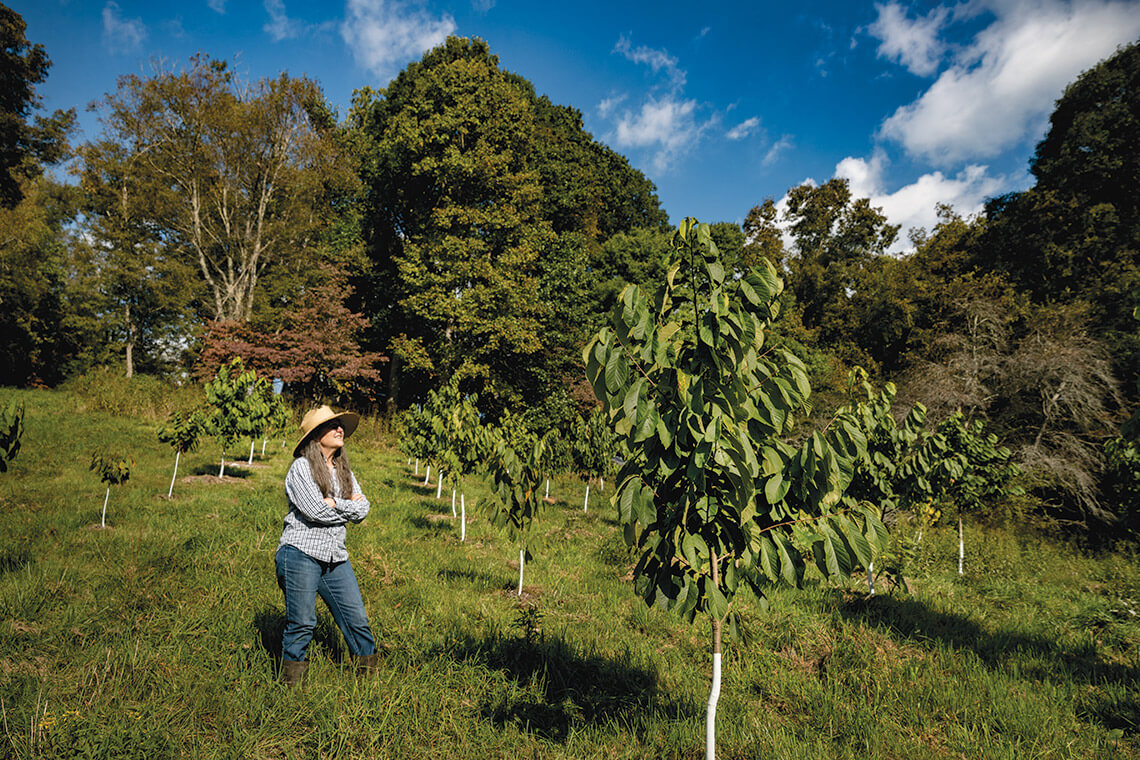 She nods toward a tree that’s lost one of its pawpaws to gravity. It’s a cultivar, large as a baked potato. “Pawpaws bruise easily,” she says. “I try to get to them before they go down, but it’s not always possible.” Still, the fruit isn’t too far gone to be edible.

Owen bends to lift the fallen fruit in a motion that mirrors the dance moves she’s practiced for half a century. Little Susie — born of the beloved folk song — might not have known better than to put ripe pawpaws in her pocket, but grown-up Owen knows that would make a mess of laundry. Even if she wanted to store that pawpaw in her trousers, there wouldn’t be room. Because back when she was snacking on native fruit, she needed a place to store its next-generation bounty. So her pockets are already full of pawpaw seeds.