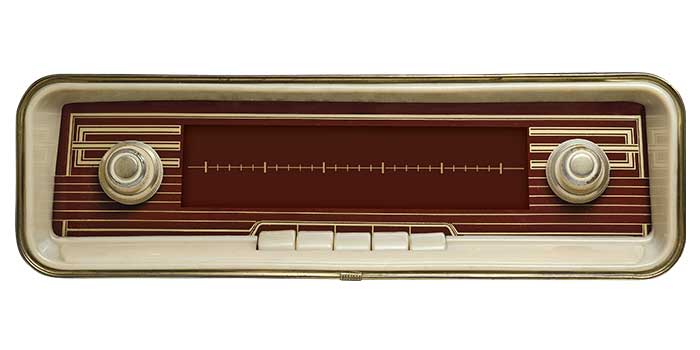 N.C. State College launches WLAC, our state’s first college radio station. It lasts less than a year, but the Wolfpack would be back: Today, State’s WKNC boasts one of college radio’s strongest signals, and is a champion of local music.

The Durham Life Insurance Company buys Raleigh’s second radio station (first known as WFBQ, then WRCO), and changes its call letters to WPTF for “We Protect the Family,” the company’s motto.

Carl Goerch broadcasts a Sunday night radio show called “Carolina Chats,” which lasts for 28 years, as well as a series called “Doings of the Legislature,” both on WPTF. The same year, he founds a magazine called The State.

Edward R. Murrow, a native of Polecat Creek near Greensboro, makes history on CBS Radio, reporting live from Vienna as the Nazis occupy and annex Austria. “Good night,” he says through the war years, “and good luck.”

Rocky Mount native Kay Kyser, “The Ol’ Professor,” airs his “Kollege of Musical Knowledge” on NBC Radio. In 1949, Kyser says, “So long, evahbody,” to radio, but not before building a fan base of 20 million weekly listeners.

Earl Scruggs, just 15 years old, plays banjo on North Carolina radio for the first time, with a local string band called the Carolina Wildcats. It’s a natural next step for the boy from Flint Hill who began performing at the age of 6.

WAAA, the state’s first AM station to focus on African-American interests, starts in Winston-Salem, giving a home to D.J.’s like Oscar Alexander and his “Daddy-Oh on the Patio,” which airs from Ray’s Roadside Drive-In.