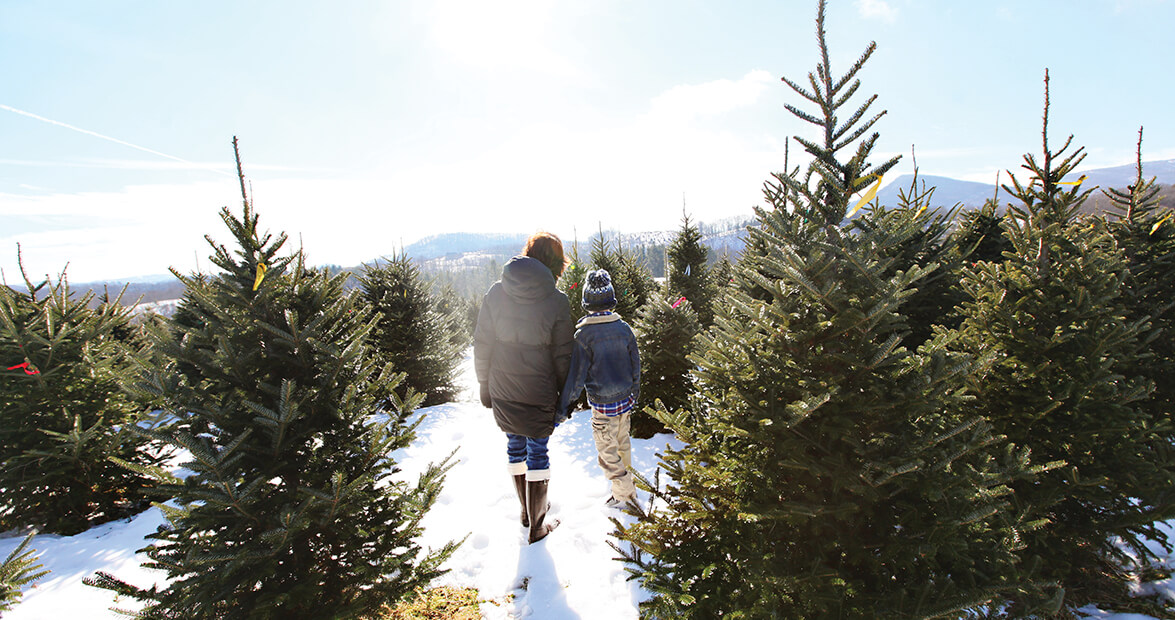 Each Thanksgiving since the kids were little, the Nickens clan has pilgrimaged to the greater Foscoe-Valle Crucis-Meat Camp metropolitan area to camp below Grandfather Mountain, hike the Boone Fork Trail, worship at the altar of the Mast General Store candy annex, and knock through the shops in downtown Blowing Rock. But the main event is our annual visit to a choose-and-cut Christmas tree farm. Always over Thanksgiving. Always to the same farm. Always a Fraser fir. Always culminating with the same photo of Markie and Jack, standing in front of the chosen conifer, holding a PVC pipe marked with the tree’s height, like a High Country version of American Gothic. It is a cherished tradition that nearly always devolves into a nasty, four-way, knock-down-drag-out argument over which tree to cut. That one’s too skinny. That one’s too short. Afterward, we ride down the mountain, toward the infant Christmas season, in a fuming family silence, the way God intended.

We wouldn’t miss it for the world.

Our favorite Christmas tree farm is north of Boone, way up Meat Camp Road, accessible by a skinny one-way farm drive that claws its way to a conifer-clad mountaintop. You pass an old waterwheel where folks once brought their buckwheat and corn to grind. You cap out at 4,010 feet, looking out at the great, green, unblemished rampart of Rich Mountain and Elk Knob. The truck tires bump and lurch over the low gray stumps of Christmas trees cut in past years. There’s a hubbub of activity up there: guys in Carhartt overalls and elf hats on ATVs, kids running everywhere, a big metal barn where hot chocolate simmers. It’s as cheery and festive a scene as you can imagine. I halfway expect Jimmy Stewart to walk around the barn corner to ask if he can give me a hand. I wouldn’t be surprised if Hermey the elf was making wreaths behind the tree-trimming station.

All told, North Carolina is home to some 400 choose-and-cut Christmas tree farms. We are second in the nation in the number of Christmas trees cut and sold, the vast majority of which are Fraser firs. It’s an astonishingly large industry: At any given moment, there might be 50 million Fraser firs growing in our mountain ground.

According to the North Carolina Christmas Tree Association, Fraser fir is the people’s favorite due to its “soft, pleasant-to-touch needles, incomparable needle retention, long lasting aroma, and more pliable yet stronger branches for even the heaviest ornaments.” This last attribute is the clincher for my crowd, because once we get the tree up in the living room, we load that baby down with some doozies.

We don’t go for the magazine-spread look. Don’t misunderstand: We hang plenty of fine, store-bought ornaments. But there’s more than a passel of homemade, homegrown, half-mongrels in the mix, so many that some folks might figure we dragged our tree through the local landfill. The spectrum ranges from the ancient wooden snowman I painted back in 1971 to various handprints from the kids to the cherished “vomit chain” that Markie and I made when she was home from school with the flu one day. I can see it still: The two of us sprawled on the floor in our pajamas, her little face flush with fever, her tiny glue-spackled hands looping red and green construction paper links, one to the other. The vomit chain trumps a Swarovski crystal snowflake every day of the week.

But all that comes later. First, we have to find our perfect tree. 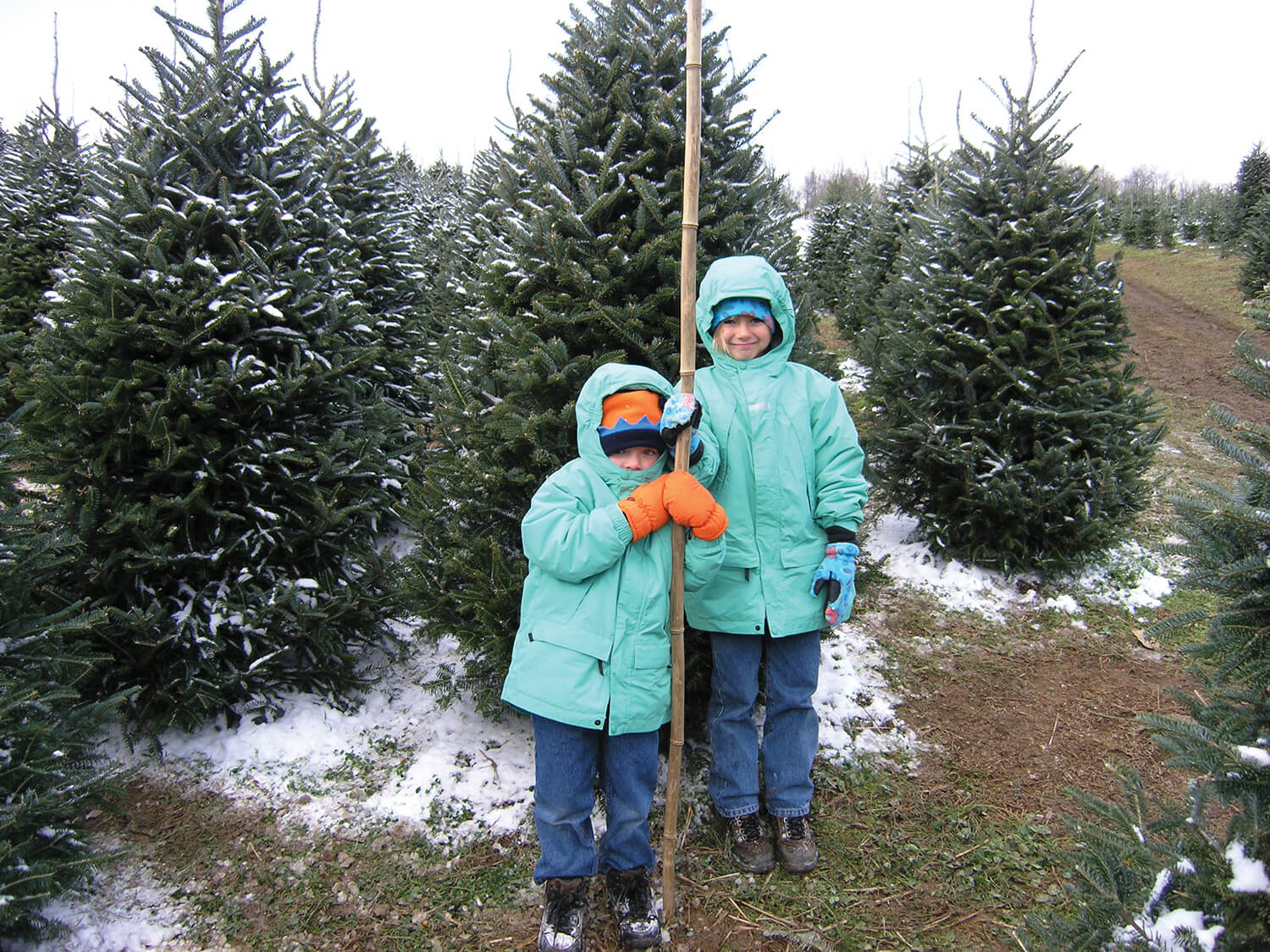 The Nickens family’s tradition began in 2003, with Jack and Markie Nickens — and a cane-pole measuring stick — in the North Carolina High Country. photograph by sara brennan

What started this family tradition was the year we bought our tree at the farmers market. Markie was just a baby, our only child at the time, and she ran out of patience as my wife, Julie, and I parried over the tall-versus-fat paradigm. She got increasingly fussy — Markie, that is — and then it started to rain, so we made a quick grab at a tree lot next to a seafood stand. For weeks, the house smelled of fir and fried shrimp. There had to be a better way, we figured, and when we stumbled upon that mountaintop Christmas tree farm north of Boone, with its panoramic views and dogs running free, we knew we’d found our holiday nirvana. We’ve returned year after year.

And Year after year: You can see the passage of time in the photographs we took of the kids. After the tree hunt, after the arguing over whose choice was best, after the pouting and protests, we’d line Markie and Jack up in front of the lucky tree, hands sharing the PVC pipe — and before that, a bamboo pole — used to measure its height and the commensurate wallop on my wallet.

The pictures mark our family’s life stages, like the pencil marks on the back of the closet door where we charted the kids’ growth. Braces on, braces off, hair long, hair short, snaggleteeth and baby fat, sullen smiles forced by threat and huge grins in a falling snow. For years, Markie, three years older than her brother, towered over Jack. In 2011, he pulled almost even. Last year, he was a head taller. Father Christmas and Father Time, working hand in hand.

The fact that those weren’t always idyllic moments on Christmas tree mountain has helped me understand a few things about the holiday season. For starters, there really is no perfect Christmas tree. Tree farmers prune their trees practically from birth, taking much of the variation out of an otherwise wild thing, shaping the trees into carefully coiffed, Burl Ives-approved inverted ice cream cone shapes. But nature’s vagaries and imperfections can’t be completely domesticated. Every tree has at least one “bad spot” — a crooked trunk, a funky limb, a hole in the foliage that you could throw a cat through. How many times has one of the kids run up to a promising tree, shouting, “Found it! Found it! Over here, everybody!” only to walk to the far side and see the hidden imperfection?

When we stumbled upon that mountaintop Christmas tree farm, with its panoramic views, we knew we’d found our holiday nirvana.

Christmas, for so many of us, is a time of perfection-seeking. From the Christ Child to the platitudes of “peace on earth,” we embrace the notion that this year, this season, we’ll reach some transcendent state of holiday wonderfulness that has eluded us in Christmases past. But then somebody can’t make it to the traditional Christmas Eve dinner because somebody’s in-law’s sister has to work late, and so it goes: The turkey won’t thaw and we can’t button last year’s pants and the stores are out of non-twinkling, plain white tree lights already. Perfection is a chimera. Best be happy with a close brush. Just ask Icarus.

After all, we always make it work with the not-quite-perfect Christmas tree. We turn the bad spot and the funky limbs toward the wall. We cover up the one gaping hole with the gigantic painted Santa Claus starfish my mom gave us that smells, year after year, of starfish. No one will know, as long as they don’t breathe too deeply. When we accept the grace of each year’s imperfect Christmas tree, it’s easier to get past all the other unrealistic expectations of a postcard holiday. It’s the very first gift of the season.

Over the years, marvelously, miraculously, our family has come to some agreement at the end of Meat Camp Road: Our perfect tree would be the tallest, fattest tree possible, its only limiting factor being the height of the ceiling back home. I can’t recall when exactly we hit upon this holiday détente, but at some point it occurred to us: Why choose?

Since then, we’ve not had any more mountain meltdowns. In our singleness of purpose, we hunt down the largest, most rotund Fraser fir that remotely appears as if it will fit inside the house. We’ve bought trees three feet taller than necessary, well aware that we’d have to lop off $30 worth of the bottom in order to maximize the over-the-top proportions we now require. Merry Christmas: Everyone can have what they want, as long as it doesn’t poke a hole through the Sheetrock.

Last year was one of our more impressive Nickens moments. I’d insisted on actually cutting the tree instead of outsourcing the labor to the friendly elves in cotton duck overalls, so I grabbed a bow saw as Markie and Jack swarmed the tree farm. This time, there were no parental admonishments of “no running!” and “stay where we can see you!” Markie was a freshman at Appalachian State. Jack was already three inches taller than me. There wasn’t a snaggletooth to be seen. It was sweatshirt-cool, and I held Julie’s hand as we walked through serrated rows of trees. All around, I could hear other families laughing, calling out to one another, arguing the merits of their favorite Fraser fir.

The tree we settled on was appropriately monstrous, with the appropriately proportioned hole for the slightly rotting starfish Santa. Jack and I squirmed under the lower boughs and worked the saw. Julie and Markie yelled “timberrrr!” when it came tumbling down. Back at the metal barn, the thing proved so fat that it required hauling in the extra-large netting machine to swallow up our Nickens-proportioned Fraser fir. Folks gawked. Our hearts swelled with pride.

Once we got it home, we would snip the netting and let the boughs fall out for a day or two, and it would take all four of us to get it into the house. We wouldn’t be speaking to each other after that little episode, either. But after that, for the next five weeks, the Fraser fir would be an anchor to the family, holding us fast to home as the holidays pulled us in every other direction.

On the drive home, we turned off of Meat Camp Road and threaded south through Boone. On Interstate 40, every third car carried a tree on top. You can see it but a few perfect weeks each year: Christmas, fragrant and alive, coming down the mountain.