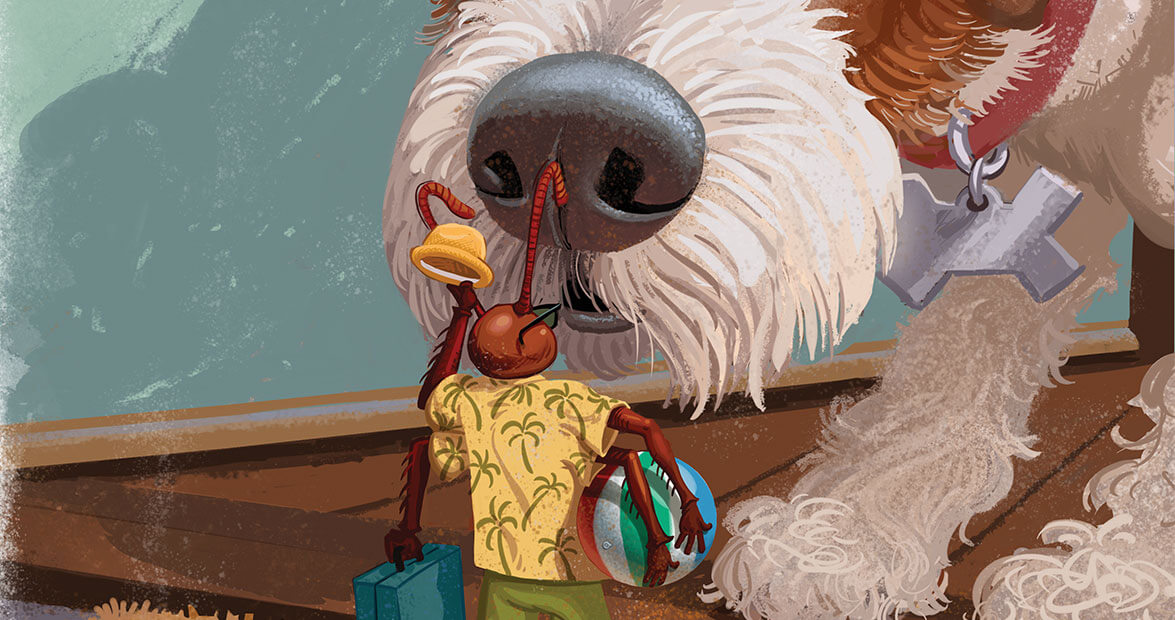 My daughter, Markie, was a smidge offended, I do believe.

She and a friend were living at our house in Morehead City over the summer, working after their sophomore year in college. Markie said her pal was really freaked out. She’d told Markie: “Your parents need to do something about all these roaches.”

I did a double-take. It’s not like we’re neat freaks, but even I won’t tolerate vermin.

“Roaches?” I asked. “We don’t have no roaches. We’re high-class people. Everybody knows that.”

I fact-checked this position with my son.

“Jack,” I asked him. “You seen any roaches down at the beach house?”

He never looked up from his iPhone. “Roaches?” he replied. “No. That’s nasty.”

Julie, my wife, was laughing already. “She must’ve been talking about the Palmetto bugs,” she said. “Those aren’t roaches. They’re just beach bugs.”

“Absolutely not,” I said, settling the question. After all, I subscribe to Smithsonian magazine. I’m practically a scientist.

The family breathed a little easier. Just a little misunderstanding. We sure didn’t want people thinking we have roaches.

If you have a beach place, or frequent the Cackalacky coast, you know what I’m talking about. Here in polite beach country, the large, multi-segmented insects with the lustrous chocolate-brown exoskeletons are known as Palmetto bugs. Beach bugs. They’re as common as sand spurs. Part of the package. They’re not roaches — have you lost your mind? Every beach cottage comes with Palmetto bugs. You don’t even have to place a special order. Heck, we’re on a first-name basis with some of them. Look, there’s Fred. I think he’s lost another leg, poor boy.

I’ll admit that Palmetto bugs can get under your skin. Sort of. We’ve had to install child-proof locks on a couple of cabinets. One or two Palmetto bugs at our place have learned to open the refrigerator. When they get that big and obstinate, Black Flag won’t do. I’ve resorted to .30-06 rounds. You just gotta watch where you shoot.

But mostly, folks at the coast learn to accommodate. We’re not averse to swinging a rolled-up newspaper when we need to, but, like sunburn and sand in the bed, Palmetto bugs — not roaches, fer crying out loud, that’s nasty — are just a part of having a beach place.

I think about that exchange with Markie’s friend every March or so, when Julie and I head down to Morehead City to open up our beach place. Well, we don’t really “open it up” since it’s never really closed, and it’s not really a beach place since it’s three blocks from Bogue Sound in downtown Morehead City. But we do like to roll down in March and get all 950 square feet of it spruced up for the coming spring and summer. For a lot of folks who have a place at the beach or in the mountains or by the lake, it’s a pretty common migration this time of year. 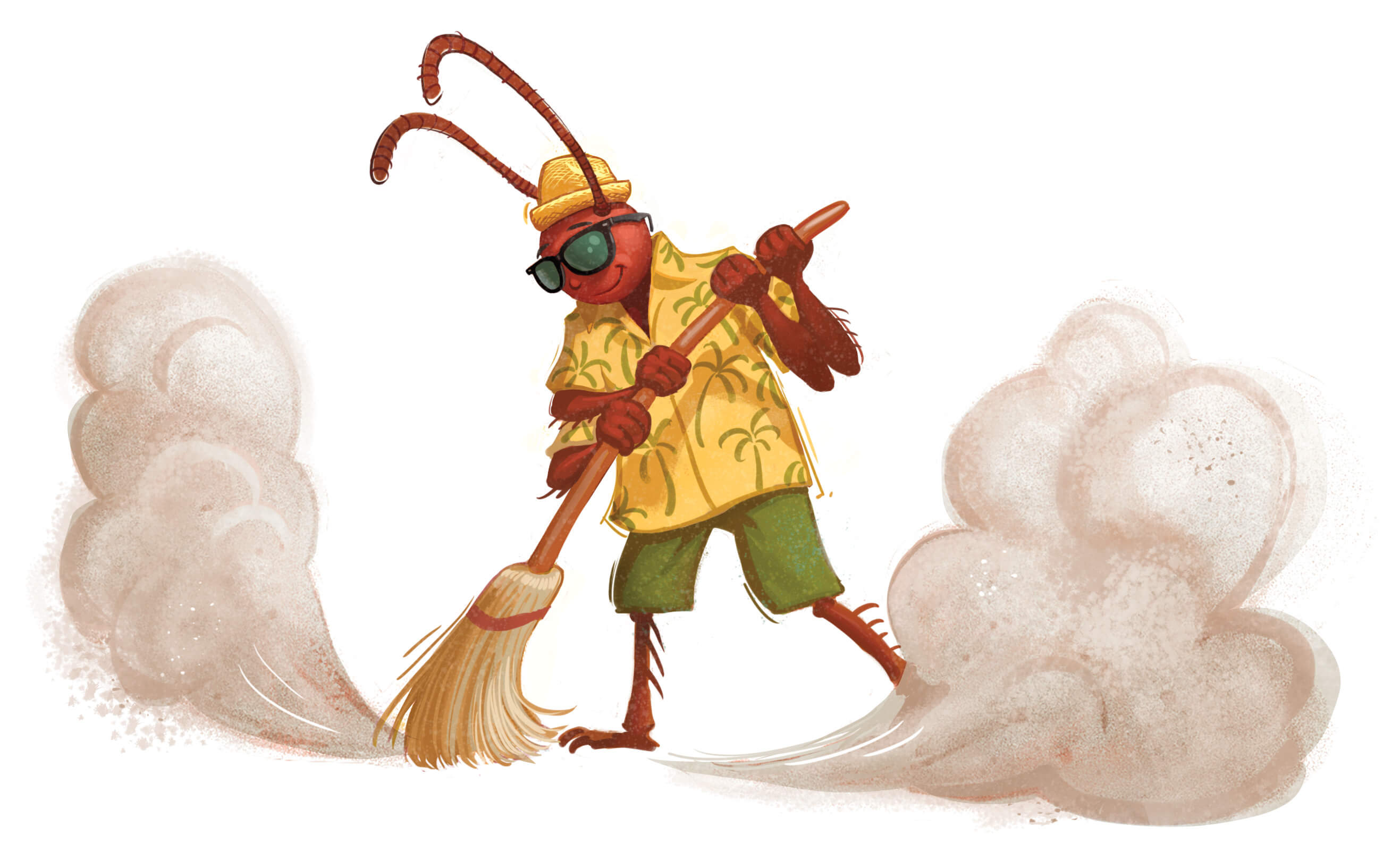 Julie immediately goes into some sort of scary deep-clean voodoo trance while I do the important stuff. I take stock of the spice rack — Old Bay, blackening spices for fish and shrimp, barbecue sauce in all the important styles: eastern, Lexington, Memphis, that stuff with Cheerwine in it. I change out the lines in the fishing reels. Oil the bicycle chains. We have our annual argument over the lack of a showerhead in the outdoor shower. A few years back, the showerhead fell off, and now the water roars from the open pipe in a torrent that will knock you into the back wall if you’re not ready for it. It’s like having a private room at Massage Envy. Jack and I have vowed never to replace it.

It takes us most of a Saturday to spit-shine the place and decide that, yes, we do think we can wait another year before painting the porch railings, because in another year, every molecule of paint will have flaked off the railings, and that will make the scraping a whole lot easier. Then we head out to the back porch from which our pooches, Biscuit and Minnie, have watched with complete indifference as their masters work themselves silly. With the kids off to school, it’s just the four of us now. Julie brings out her beloved leopard-print electric blanket — I told you we are classy people — and we assume the position: She stretches out on the sofa, feet in my lap, dogs on their blankets, house in order, spring on the way, and we think about the summers past, and that time Markie and I filled the boat with the driftwood that leans against the shed, and the summer Jack had his first crab pots and spent most of an afternoon picking seven crabs on the picnic table. And we wonder about summers to come and pray that we’ll all have a chance to be here together, and we drink coffee, and sit quietly in the cold of a March afternoon, still really sort of amazed that we have this place, and that life worked out this way.

Eventually I did spring for the $22-a-month pest-control service. My mom and her friends came to stay at the house one time, and they were, um, less accommodating than I to the gentle pleasantries of the Palmetto bug. “Really,” she said, “you have got to do something about those roaches.”

But I have to say, I’ve missed ol’ Fred. He hasn’t been around to greet me when I raid the fridge for a late-night snack, his glossy back glinting in the light, backed into a corner under the cabinet, antennae twitching as if to say, Hey, man, what’s up? Try the crumb cake over by the coffee maker. That stuff is awesome. He never meant any harm. He always scurried into the crevices of the porch sofa when he saw me coming. He was so gracious that way. Always letting me have the good spot.