A new year is upon us. But before we left 2013, we asked you to take a look back at all the great issues of Our State from the past year.

You voted for your favorite cover, story, photo essay, recipe, and video. The winners for each category are below. Did the ones you voted for win? 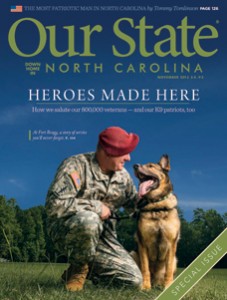 November: Heroes Made Here
How we salute our 800,000 veterans – and our K9 patriots, too. Plus, the most patriotic man in North Carolina and a story of service at Fort Bragg that you’ll never forget.

See the table of contents and the online exclusive content that was featured in this issue.

The Only Game in Town by Megan Crotty (September)
On fall Friday nights, communities gather under stadium lights to root for our sons and grandsons, and cheer along with our daughters and neighbors. Win or lose, we celebrate the successes of the current generation, and revel in the glory of past gridiron stars. 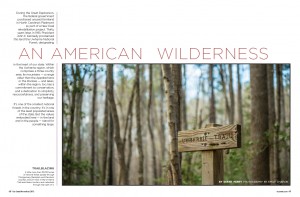 The Uwharrie National Forest (November)
During the Great Depression, the federal government purchased unused farmland in North Carolina’s Piedmont as part of a New Deal rehabilitation project. Thirty years later, in 1961, President John F. Kennedy proclaimed this land the Uwharrie National Forest. Though one of the smallest national forests in the country, the values embodied here — in the land and in the people — stand for something large. Photography by Emily Chaplin.

See slideshows of all the 2013 photo essays. 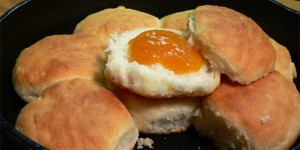 See all the nominated recipes from 2013.

View all the videos that were nominated this year.