In honor of the Fourth of July, we’re highlighting a few places, foods, animals, and businesses across North Carolina — from red-brick lighthouses to bluegrass music — that shine bright with the colors of both the North Carolina and United States flags. 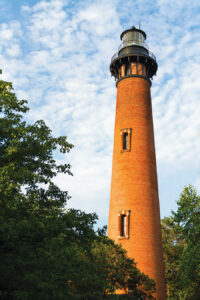 The red-brick Currituck Beach Lighthouse was built in 1875. photograph by KENNETH_KEIFER/ISTOCK/GETTY IMAGES PLUS

In the northeastern corner of North Carolina, standing watch over treacherous Outer Banks shoals, the Currituck Beach Lighthouse is a steadfast symbol in red brick. In 1875, the lighthouse in Corolla filled the last dark space in a chain of beacons along the North Carolina coast, its lard-oil lamp guiding sailors toward their own brick houses awaiting them on the mainland.

There’s no way to quantify how many ships have been saved from imminent danger by Currituck’s light, which now comprises 24 LED bulbs. Site Manager Meghan Agresto hasn’t found any letters of appreciation from mariners to Currituck’s keepers in her 17 years of service; there are towers positioned every 30 miles or so along the East Coast, after all.

But she can point to heroic feats of hospitality. Over a three-day period in 1878, principal lighthouse keeper Nathaniel G. Burris provided food, shelter, and medicine to about 76 survivors from the wreck of the Metropolis, a poorly built steamer that began sinking when it entered North Carolina waters. In those three days, the dozens of stranded seamen likely found solace in the shadow of Currituck’s sturdy brick frame. Perhaps, before boarding another steamer headed to Norfolk, Virginia, they found courage in the lighthouse’s quiet strength. — Chloe Klingstedt 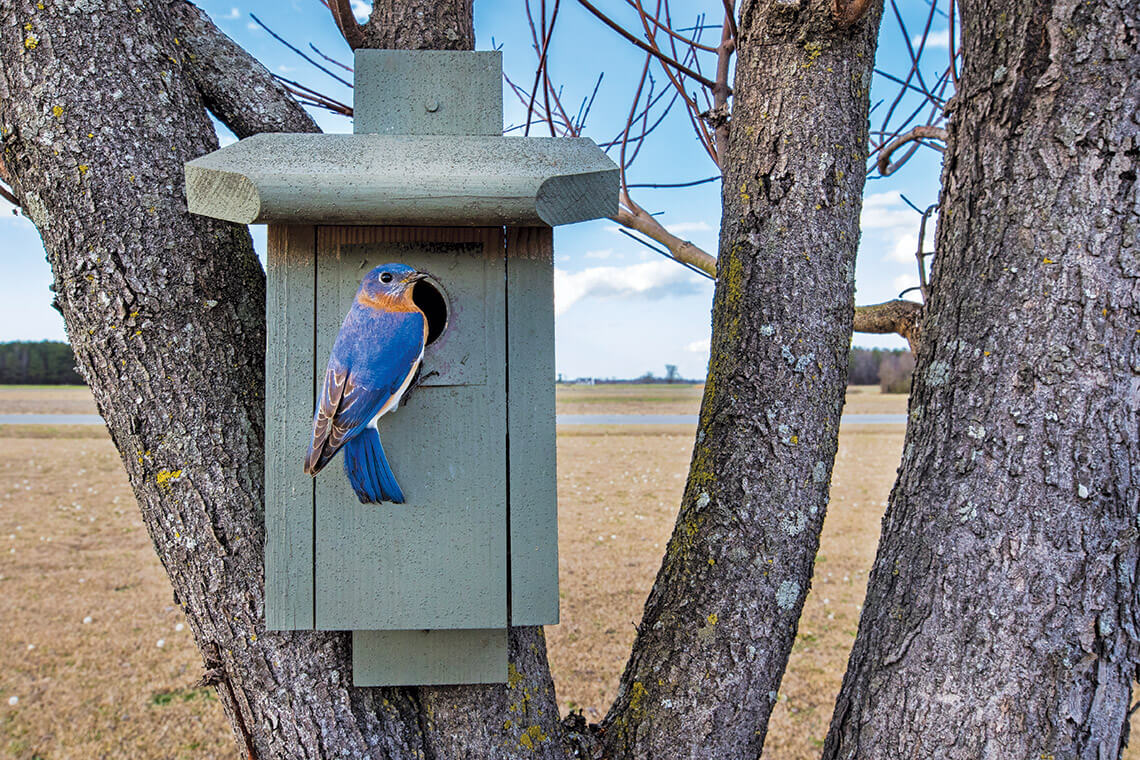 Each bluebird house is built by volunteers in Warrenton using mainly western heart pine or cypress. photograph by Neil Jernigan

For the Birds — Warrenton

As Frank Newell sat on the front porch of his Warren County farmhouse, an eastern bluebird alighted in a nearby dogwood tree. When the bird started singing, Newell felt called to build it a home.

More than 25 years later, Newell’s daughter Kristye Steed recalls how her father, who died in 2020, would sit in his rocking chair and sip a steaming cup of coffee every morning, watching the sunrise from under the bill of his favorite ball cap from the U.S. Department of Agriculture, where he worked as a wildlife specialist. Newell noticed that many of the farmers in Warren County had clear-cut their forests and replaced wooden fence posts with metal ones, destroying much of the habitat of the eastern bluebird, which likes to nest in the hollows of trees and in the holes of wooden posts.

When that bird whistled to him, Newell stepped off his porch, walked to his garage, and started building his first bluebird house. In 1996, Newell, along with Steed and her husband, Anthony, founded the Eastern Bluebird Rescue Group. To date, the organization has built more than 371,000 bluebird houses, sold at cost. Now, thanks to the work of this and other organizations, an abundance of bluebirds make their homes across the state once again. — Rebecca Woltz 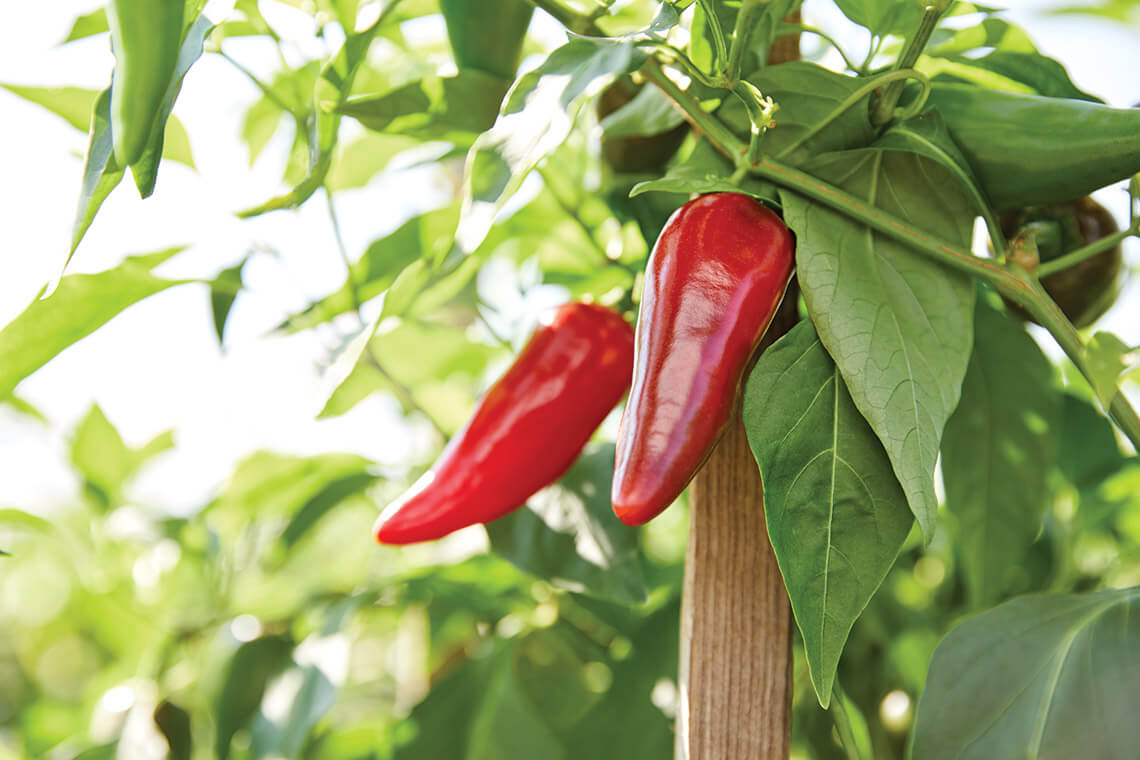 On his farm in Granville County, Randy Bailey grows both sweet peppers and chili peppers like the red Fresno, which falls in the middle of the Scoville heat scale. photograph by Eric Waters 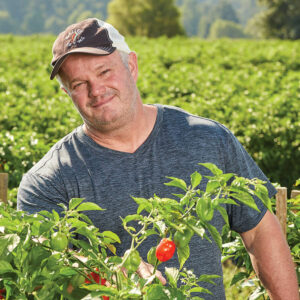 Randy Bailey wanted to grow peppers for a very simple reason: He likes spicy food. He got hooked on heat while eating dinners with his childhood best friend’s family, who were from Mexico. When Randy — who grew up helping his dad, Thomas, farm strawberries, squash, and tomatoes — was looking to start a new farming venture in Oxford in 1990, he didn’t know of any pepper growers on the East Coast. He figured that was a niche he could fill. He and Thomas started small, planting only a few acres in the summer and delivering the peppers in their pickup trucks. Now, Bailey Farms grows peppers year-round in North Carolina and Florida, and has growers in Georgia, South Carolina, and Mexico. At peak summer production, about 70 workers walk the rows on the farm in Granville County, filling five-gallon buckets with peppers ranging in spiciness from sweet Bellafinas to hot habaneros. — Rebecca Woltz 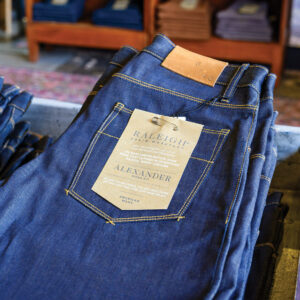 A sea of denim greets shoppers at Raleigh Denim Workshop, from deep indigo to light blue washes that look almost white. Colors and cuts come and go, but the Martin stretch jeans, a tapered fit, are a fan favorite and a point of pride for designer Victor Lytvinenko.

Lytvinenko and his cofounder Sarah Yarborough’s goal is to create the perfect wardrobe with a range of motion for both work and play. “I want to go to work, and I want to look great,” he says. “Then I want to go over to my friend’s house and play Ping-Pong. That’s a lot to ask of a garment, but that’s what I want.”

While shopping, customers can watch the 10 or so Raleigh Denim employees at work on vintage sewing machines. On some nights, Lytvinenko brings out the Ping-Pong tables in the workshop — all in the name of quality testing, of course. — Hallie Milstein 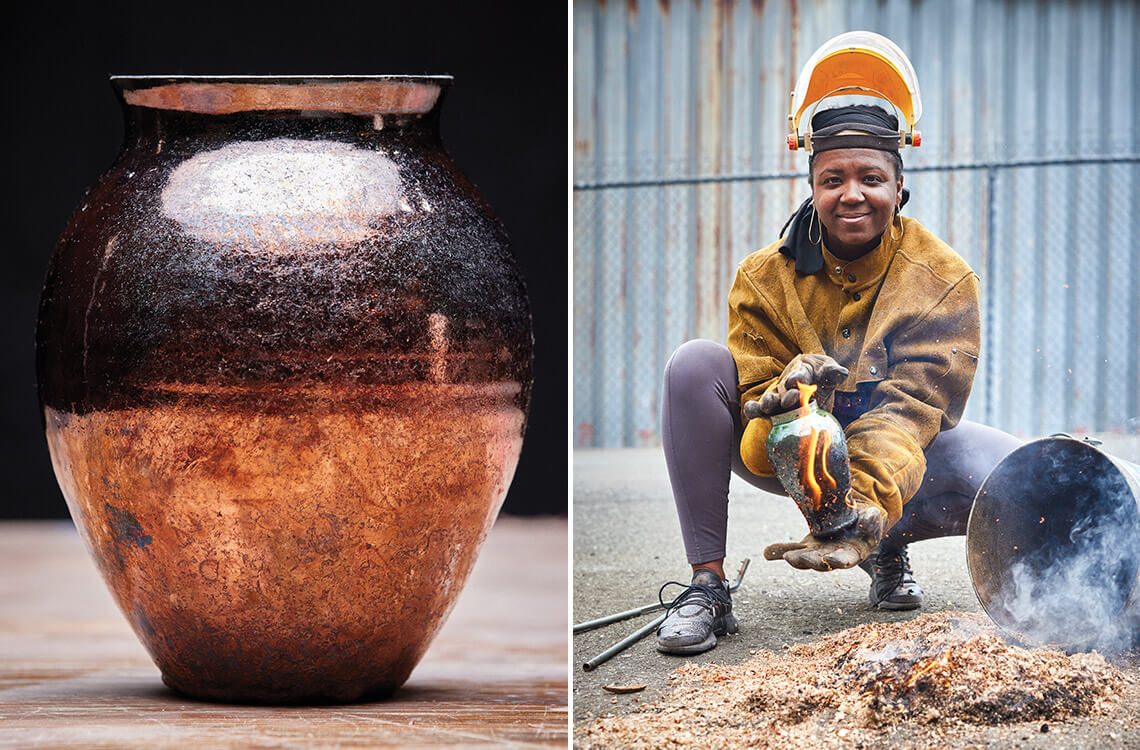 A lava-like glow reflects off of Delores Farmer’s face shield as she extends a pair of metal tongs into a 1,850-degree kiln to grab hold of a vase. Only a few minutes earlier, she’d placed the clay vessel in the kiln behind her Liberty Arts studio space in Durham, and it’s already glowing a fiery crimson hue. But now isn’t the time to sit and marvel. It’s time to move! Farmer quickly maneuvers the vase out of the kiln and over to a nest of sawdust that she’d already formed on the ground. The sawdust acts as a kind of igniter, causing the piece to catch fire immediately. She then covers it with a metal bucket, suffocating the flames and creating a reduction chamber. This firing technique, known as raku, creates a chemical reaction in the vase’s glaze, giving it a copper sheen. She repeats the steps until a collection of flaming rainbow vases surrounds the kiln.

A Durham native, Farmer got her start in North Carolina’s long-standing pottery tradition just down the road at Claymakers, where she began as a studio assistant nine years ago. It was there that she started experimenting with raku before going on to work with New York ceramist Alan Bennett. Now, Farmer has her own studio and teaches raku classes and she’s still filled with excitement each time she uncovers a piece to reveal what the fire has created. — Katie Kane 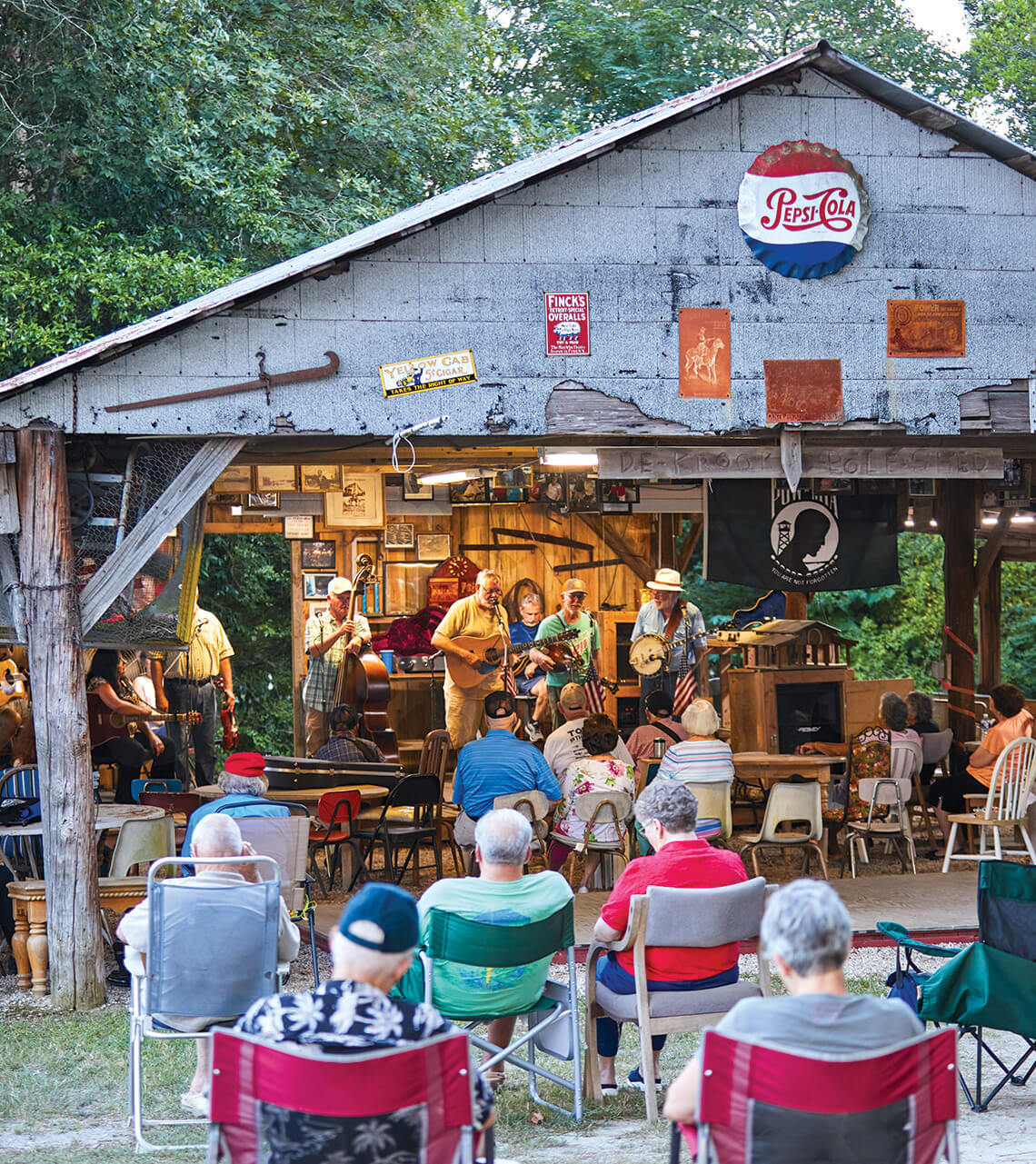 On Thursdays from April to October, Danny Pate (playing guitar) and his current band, the Red Bluff Ramblers, are a staple at The Pickin’ Shed’s open-mic nights. photograph by Eric Waters

Danny Pate called John Gibson, a farmer from Scotland County, with a proposition: He wanted to buy Gibson’s 1950s tractor shed and move it to a spot across from Pate’s grocery store on McFarland Road.

“What in the world are you going to do with it?” Gibson asked. Pate explained that he wanted to transform it into a performance venue for the band he was in at the time, the McFarland Road Bluegrass Band. “I’ll tell you what,” Gibson said. “You take it down and move it. You send me $200, and when you clean up after yourselves, I’ll send you $100 back.”

So in 1999, with the help of the community, the shed was moved, piece by piece, to its current location. Everyone pitched in: One friend volunteered his forklift, a second donated telephone poles to be used as support beams, and a third added sides and a stage. Local cloggers, who wanted a place to dance together, installed a dance floor, too.

Although The Pickin’ Shed started out as simply a place to play music, it has, over the years, become a beloved community gathering place. It’s hosted two weddings, countless receptions, and a fundraising event to buy a handicap-accessible van for Pate’s grandson. But as the photos of regulars that line the walls attest, most people just come to jam. — Rachel Malmin

The Pickin’ Shed
Crossroads of McFarland and Marston roads
facebook.com/redblufframblers

It’s All About the Slaw — Gastonia 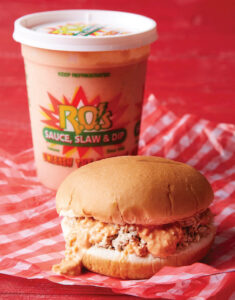 R.O.’s Sauce, Slaw & Dip is sold at Food Lions, Harris Teeters, and Ingles Markets in Gaston, Lincoln, and Cleveland counties, and at R.O.’s Barbecue in Gastonia. photograph by Matt Hulsman

In between running machines at a Gaston County cotton mill and working shifts at Tom’s Barbecue in the 1940s, Pearl Black perfected a recipe that would be enjoyed — and shared — by her family for generations. In her home kitchen, she shredded cabbage with a hand grater and added ketchup, mayonnaise, relish, Texas Pete, and 12 other ingredients — all easy to find post-World War II — for a tangy red slaw.

Eventually, Pearl and her husband, Robert Osy Black, acquired the lease for Tom’s Barbecue on Bessemer City Highway and, in 1946, reopened as R.O.’s Barbecue in a new building on Gaston Avenue. The slaw burger — Pearl’s slaw sandwiched between two large, toasted buns — became the most popular item on the menu for its taste and price (a nickel). “The slaw is what made us famous,” says Pearl’s grandson, Mark Hoffman. “It’s the only reason why we’ve been here for 76 years.”

The recipe, which hasn’t changed, has passed from generation to generation. Pearl taught her daughter, Ruth Black Hoffman, how to make it, and Ruth taught her son, Mark. Decades later, R.O.’s Famous Slaw Sandwich is still a favorite at the storied restaurant. — Vanessa Infanzon 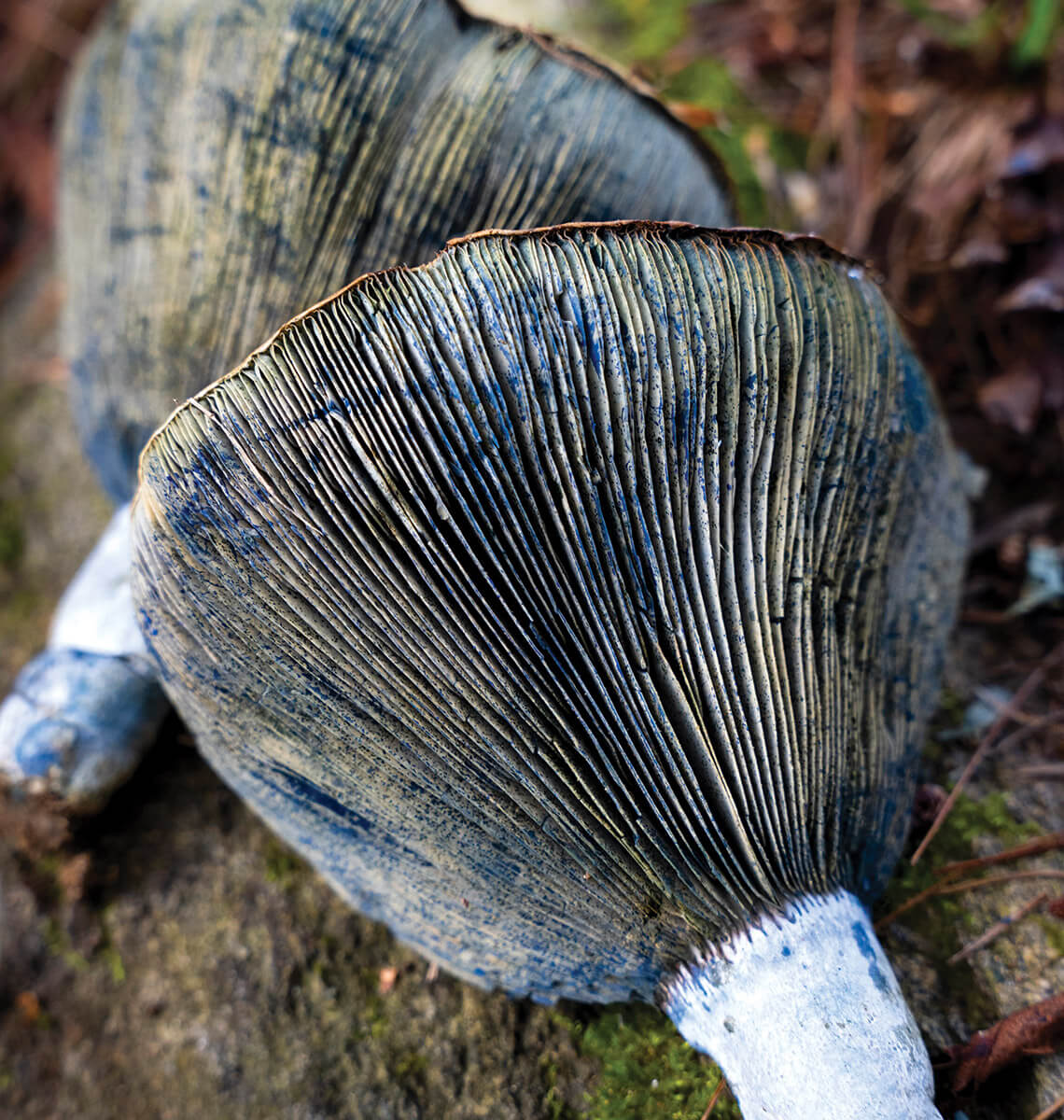 Indigo milk caps, or Lactarius indigo, get their unusual blue color from a compound in the milky substance they exude, which sometimes turns dark green after being exposed to the air. photograph by Erin Adams

Out of the Blue — Asheville

On a wooded trail just east of downtown Asheville, foraging educator and local mushroom expert Alan Muskat sees beyond summer’s overgrown greenery to spot a surprisingly edible mushroom with a Smurf blue underside: the indigo milk cap. Blue may be a prominent color on Earth, but among living things, it’s rare. So while it seems that this bright specimen should easily stand out, finding it takes a trained eye. “Foraging takes practice and guidance,” Muskat says. “It takes a community.” Not unlike the symbiotic networks that fungal mycelia form throughout forests, those in the foraging community share sightings, which is how Muskat came to search this particular area.

In short order, he spots a palm-size indigo milk cap, partially concealed under a composting pile of last winter’s leaves. Milk caps seep a sticky, milky — and, in this case, blue — fluid when cut or damaged, Muskat says. They can be found in coniferous and deciduous forests throughout eastern North America, as well as East Asia and Central America. In North Carolina, indigo milk caps are common across the state, usually from July to September. And while enchanting in their oddness, they are indeed edible and quite tasty when breaded and fried, delivering a mild flavor and a touch of nuttiness. — Melissa Reardon

Muskat does not recommend foraging for mushrooms without an experienced guide. To schedule a tour with his business, No Taste Like Home, visit notastelikehome.org.