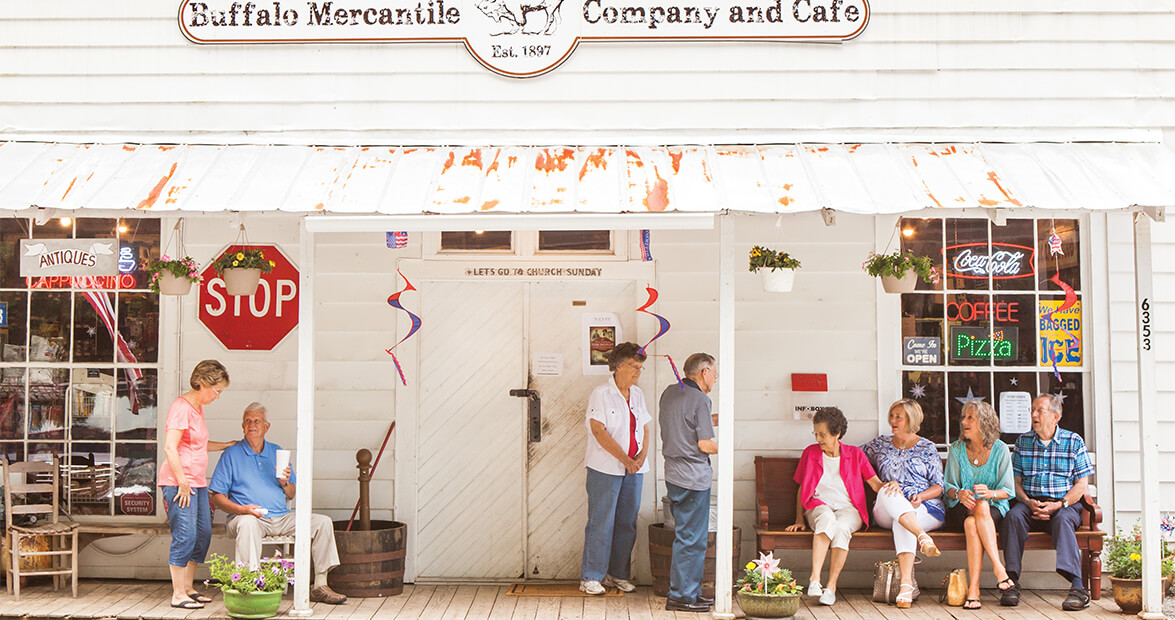 Follow the ribbon of blacktop to the corner of Buffalo Cove and Old Sampson roads: the intersection of past and present. In this corner of Caldwell County, homesteads passed down from one generation to the next are tucked between the hills and hollers. Log cabins shelter flatlanders who drive in for the weekend. There are a few family cemeteries and countless churches. And there is Buffalo Mercantile Company & Café.

The general store is not a destination so much as a place where people find themselves. They come for firewood to make campfire s’mores or to pick up motor oil and a few groceries to save the 30-minute trip into Boone.

The old-timers sit on the worn bench outside the store, their pickup trucks parked in front of the white clapboard building that looks much as it did when the general store opened sometime before 1897. It’s not hard to imagine past generations engaged in the same ritual. Perhaps their fathers and grandfathers — or even their great-grandfathers — came here to catch up on the goings-on in Buffalo Cove, too, hitching up their horses to purchase provisions or to treat their children, dressed in their Sunday best, to penny candy after church.

It’s still a popular spot after church. On Sundays, local congregations fill tables in the dining room. In the kitchen, a teenager works the homemade pizza dough, tossing it in the air before piling it high with fresh toppings and sliding it into the pizza oven. Minutes later, cheese bubbling, oversize pies are delivered to the hungry diners who bow their heads to give thanks before digging in. After the final “Amen,” the sound of clattering utensils fills the dining room.

On most weekends, a picker pulls up a chair and plays bluegrass music. When the music starts, the volume of the conversations in the small dining room goes up. Between songs, you can overhear snippets of conversations: Visitors are asked, “Where are y’all from?” and regulars are greeted with, “How’s the family?” For some, small talk is abandoned in favor of another bite of pizza.

The general store has changed hands — and names — several times. It’s been known, in turns, as Buffalo Mercantile Company, Todd’s Country Store, Todd’s Place, and Todd’s Country Store (again). Although the official address puts the store in Lenoir, the locals are quick to shuck the big-city connection and offer the correction: “We are in the community of Buffalo Cove.”

For the generations who’ve stopped in or stayed awhile, a few things have remained the same over the years: In a community where nothing is nearby, the store is the most convenient place to find provisions ranging from lightbulbs and lighter fluid to ice and ice cream, and the sense of place is the most important thing not stocked on the shelves.
A place to sit can be a little harder to come by. Servers shuttle between the kitchen and the patio, telling customers, “Grab a seat wherever you can find one.”

Outside, most of the kids are too caught up in a game of tag to eat. They race across the grass, and back and forth over a wooden bridge that spans a narrow creek, clutching ice cream cones that melt down their hands in little rivers of chocolate and strawberry. Their squeals blend with the guitar to create a different kind of mountain music.

In the midst of it all, strangers — each of whom followed the road to the middle of nowhere — find common ground.

Pizza & Provisions
Buffalo Mercantile Company was shuttered when current owner Tom Kassab bought it in 2013; it now features more than 800 products and a café with homemade pizza. “We wanted to put Buffalo Cove back on the map,” Kassab says, “and prove that a small business can drive a community.” To learn more, call (828) 758-9879, or visit buffalomercantilecompany.com.