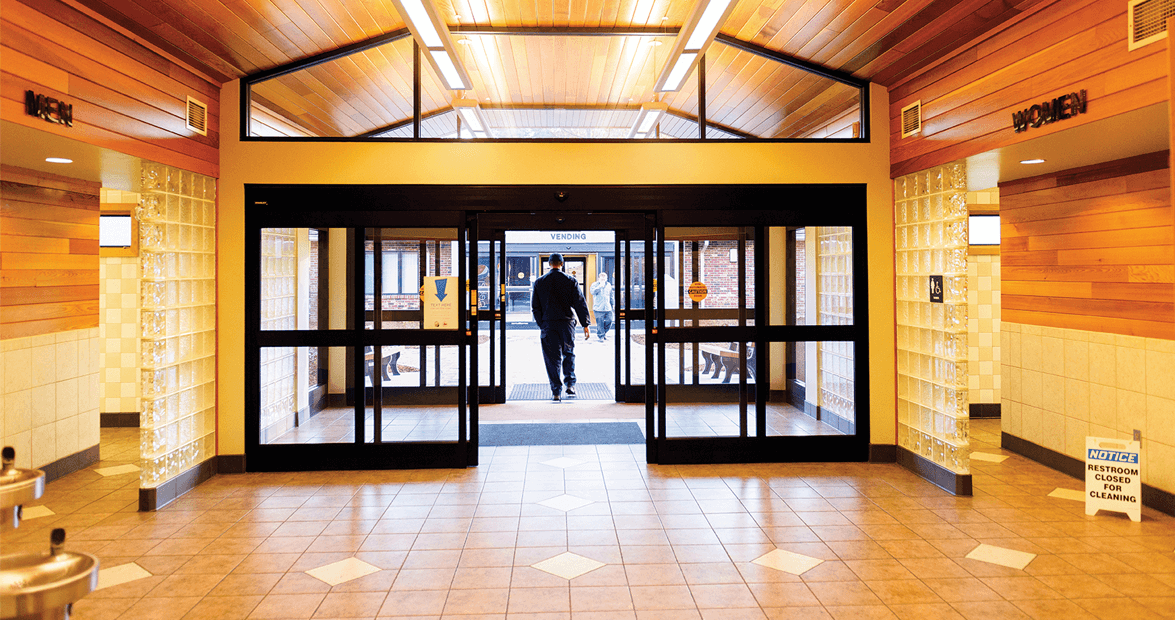 The penny was on the floor in the bathroom, and I noticed that Lincoln’s head faced up. The prospect of good luck proved to be stronger than good sense, so I reached down and snatched the penny from the cold floor. I realized that picking up a penny from a bathroom floor doesn’t make the most sanitary sense, so I washed it in the sink before putting it in my pocket.

The bathroom where I pocketed the lucky penny was the Interstate 85 South rest stop in Davidson County, one of the cleanest bathrooms in the state. This magazine deployed me to write about rest areas, so I’d been paying attention to them. And I discovered a few things.

For instance, in a conventional, public bathroom, the average flush spends three gallons of water. That’s a lot. Every time we use an old toilet, we cause a waterfall.

Experts say that by 2030, water and access to water will be the biggest environmental issues facing our world, and our state’s Department of Transportation is thinking ahead by installing newer and greener toilets. The Wilkes County rest area on U.S. Highway 421 has been gold certified by a prominent environmental group for its conservation efforts — including the reuse of more than half a million gallons of rainwater since 2009.

But our rest areas are about more than just water. They have employees and trash cans and walking trails and snacks and lights for safety. They’re there for us, and they’re among our best resources for safe travel. In fact, the chances of being in a fatigue-related accident are significantly less within 30 miles of every rest area.

The Davidson County rest area, built in 1982, is located at an odd position on the highway, where I-85 South and I-85 North cross each other. For a short stretch, the northbound lanes are on the western side of the land and the southbound lanes on the east. It’s hardly noticeable while driving. But if you look at a map, you can clearly see that it’s one of the few places in America where we drive on the left.

In the middle, the crossed roads leave a 300-acre piece of land that suits two rest areas. A path connects the two buildings, and in the middle of that path is the North Carolina Vietnam Veterans Memorial.

It may seem like a weird place to have an important memorial for veterans — honoring them near bathrooms — but when you consider that more than 400,000 people pass through here every year and there’s plenty of parking, it makes more sense.

There are 1,618 names inscribed on the wall. Among the North Carolinians who gave their lives in Vietnam are surnames like Ballance and Beddingfield and Ellerbe and Farmer and Boone and Locklear and Nesbitt and Oxendine and Spruill. Many of these are identifiable with a place — the Ballances of the Outer Banks, for instance, or the Locklears of Robeson County — and they’re all written together here in Davidson County.

For some of the 24 million people who use our rest areas each year, that stop is the only one they’ll make in North Carolina.

Jimmy Parrish takes pride in making that stop enjoyable. He’s the rest-area-section supervisor for the North Carolina Department of Transportation, meaning he oversees the 60 rest areas in our state.

Many of North Carolina’s rest areas entertain more than a quarter-million people per year, Parrish says. The one in Northampton County on Interstate 95 is the busiest, with nearly 2 million per year.

“And these places, we want to maintain them first-class, so we make a good statement on North Carolina.”

The first rest areas in North Carolina opened in 1948 in Sampson, Cumberland, and Forsyth counties. They were built through private donations. In the early 1950s, the General Assembly passed a bill to acquire land for roadside parks. Then, in 1956, the federal government passed the Federal Highway Act, giving birth to the Interstate System, and rest areas flew up from there.

Of the 60 rest areas, 32 are part of northbound/southbound pairs. And nine of them share land with North Carolina Welcome Centers, which are run by the N.C. Division of Tourism, Film and Sports Development.

On a Sunday this winter, at the welcome center on Interstate 85 at the Virginia border, Emily Perkinson searched for travel guides for a visitor. She works as a certified travel counselor in a cozy building with a fireplace and couches just a few dozen yards from the bathrooms.

She’s a full-time employee here, a permanent fixture in a place where everybody else is temporary. She sees all kinds of people. She’s also worked a shift or two at the Interstate 95 welcome center at the Virginia border, and there’s a clear difference between the two, she says. The 95 travelers are more straight shooters, on their way to someplace else. “And I’ll tell you, they’ll take you right with them if you’re driving out there,” she says, laughing. “They just drive so fast.”

At this stop along Interstate 85, though, Perkinson often meets people whose destination is within the state of North Carolina — the Triangle or Triad or Charlotte or Asheville. The most frequent end point is Biltmore House. That fact produces some interesting conversations with travelers who think they’re close to Biltmore when they reach the state line, even though it’s 270 miles and nearly four hours from here.

About 30 years ago, at the Watauga County rest area on U.S. Highway 221, a maintenance supervisor showed up to work for his 7 a.m. shift. The doors of all rest areas are always unlocked, so he simply pushed open the door to start his shift. As soon as he did, he heard a growl. He looked up. He saw a black bear. The bear had pushed open the doors and come in overnight, but he couldn’t pull the handle to get out.

That story aside, North Carolina prides itself on clean and safe bathrooms.

The people who care for the rest stops are not state employees. They work for companies that have contracts to work the maintenance and grounds. The Davidson County rest stop, for instance, is run by Goodwill Enterprises of Northwest North Carolina.

I met Rodney Hancock at the southbound rest area in Davidson County. He’s the night maintenance worker. The tag on his shirt says Goodwill. Rodney started here four years ago after being laid off from a furniture job in High Point. His dad, Harold, helped him find this one. Harold runs maintenance at the northbound stop.

Every day, they start their 3-to- 11 shifts by doing a major cleaning of the place. Then they check the bathrooms every 15 minutes. They use tongs to remove the paper from the wastebaskets, and they wipe down every toilet. They also clean the outside trash cans every hour.

“People say this is the cleanest rest area in the state,” Rodney says proudly.

I asked Rodney if people ever try to help him or tip him. And he said yes, some people do try to offer tips, but the state doesn’t allow workers to take any cash. Bathroom attendants can’t take your generosity.

To us, the people who live in North Carolina, our state contains one distinct place after another, full of diversity of landscape and people. We know the mountains and the coast and so many changes in between. We know the differences between the names on that veterans memorial.

But to people from far away, North Carolina is just one place. And their lifetime impression of this one place can be formed at any one stop.

Where to Go (When You Need to Go)

The next time you’re traveling on the Interstate, take this guide with you. You’ll never have to search for an exit again.

For a list of rest areas accessible from U.S. Highways, visit www.ncdot.gov/travel/restareas