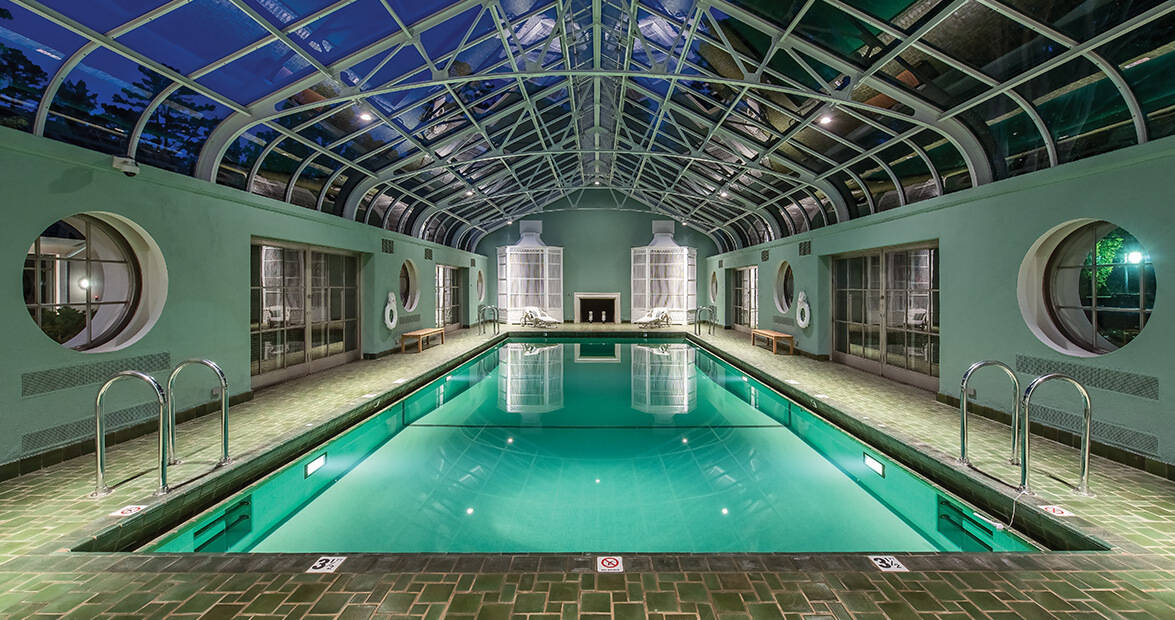 On hot summer nights, when nothing but humid air passed through open windows in 1940s Winston-Salem, Barbara Babcock Millhouse knew she was lucky to have a way to escape the heat. The teenager would slip into a bathing suit and practice the backstroke in the cool water of her family’s luminous swimming pool.

“At night, I could see my reflection in the glass ceiling,” recalls the 81-year-old granddaughter of R.J. and Katharine Reynolds, who completed Reynolda House in 1917. “I loved to spend time there. I always thought it was the most beautiful room in the whole house.”

The conservatory-style pool house was added by her mother, Mary Reynolds Babcock, in 1937, as an extension of the guesthouse, which was later converted into the lobby of the Reynolda House Museum of American Art. The recent $600,000 pool restoration is part of “Reynolda at 100,” a major fund-raising campaign that will rehabilitate much of the family’s original vision for the estate.

Millhouse’s enthusiasm is shared by many who enjoyed the pool in its heyday — as well as the countless children who have splashed there since 1971, as part of summer camp experiences at the museum. Access was blocked in 2012, when it was discovered that the cypress trim holding heavy glass ceiling panels into metal grooves had decayed.

“We became genuinely concerned about glass falling from the ceiling,” says Rebecca Eddins, director of collections management. “That was a major cost, but it was worth it to bring the space back to its original splendor.”

It was surely the grandest pool house in the Piedmont, but this wasn’t the only place to swim at Reynolda. The Reynolds children had previously enjoyed an outdoor pool created from a small retention pond on the property, which has since been filled in. The family also may have enjoyed swimming in Lake Katharine, which had been formed by damming Silas Creek.

Elizabeth Chew, director of Reynolda’s curatorial and education division, says there was another swimming hole on the property that may have been the area’s first integrated pool.

“There was a dam on the west side of Silas Lake that created a pool for people living in Five Row,” Chew says of the African-American community, largely composed of estate workers. “We have recollections in our oral histories that both black and white children swam there. It was also used for baptisms.”

After acquiring the estate from her siblings in 1934, Babcock undertook a major renovation of the home, which included excavation to add a basement-level recreation center for family fun and casual entertaining. With pre-Pinterest passion, she saved examples of decor from magazines to share with her interior designer, Eleanor McMillen Brown. 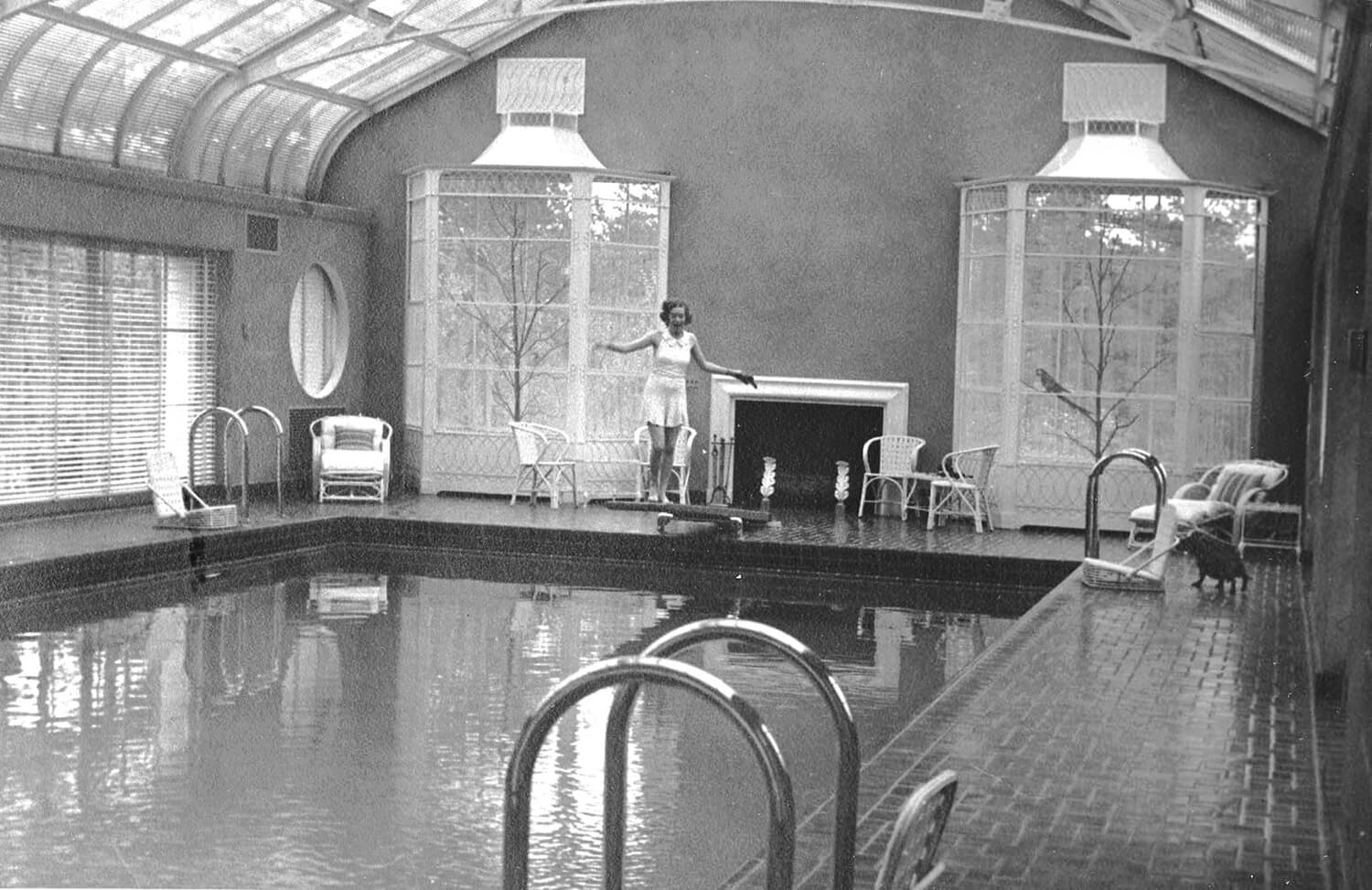 In the 1940s, a Reynolda House guest prepared to make a splash in style, while one of the Babcocks’ macaws kept watch. Photograph courtesy of Reynolda House Museum of American Art Estate Archives. photograph by jay sinclair

Bills were not archived, Chew says, but the dazzling results make it clear that Babcock spared no expense. She commissioned a then state-of-the-art swimming pool and surrounded it with artful tile, custom furnishings, and a pair of dramatic, 12-foot-tall birdcages.

Play was encouraged in the basement, which boasted a squash court, a bowling alley, and floors lacquered for roller-skating. But Millhouse says the children understood that strict rules applied in the pool house. There was no running, no shouting “Marco Polo,” and definitely no splashing of Mother.

“Oh no. I wouldn’t have dared,” she says. “Mother was one of the ladies who had her hair done every week. She always swam a sidestroke to not spoil her set.”

The pool house served as the backdrop for many parties, and although the idea of tipsy revelers tumbling into the pool in formalwear teases the imagination, Millhouse says it was unlikely. Guests who forgot bathing suits could choose from a stretchy supply kept in the changing rooms. Phil Archer, director of public programs, says Babcock worked with the architects to ensure that company enjoyed every comfort at Reynolda.

“Guests could step out of their bedrooms, wind down the stairs, change into tennis whites or bathing suits, and while away the afternoon in style,” Archer says. “Call bells could summon a butler to provide refreshments, and there was a drinks cart in the pool house for parties.”

After the home became a museum in 1967, staff members sometimes slipped into the 46-by-20.5-foot pool after visitors left. Now retired, Cynthia Leonard worked at Reynolda House for 20 years. In the fall of 2000, she kept intern Ellery Foutch company while Foutch swam laps. “She’d cross the length of the pool in three or four strokes,” Leonard says. “It wasn’t designed for that kind of swimming, but it was fun to watch.”

“It was so beautiful to swim under those overarching windows,” Foutch recalls. “Even in the middle of winter, it made you feel like you were outside. The naturalistic setting made it a truly magical experience.”

All three of Leonard’s adult children attended camp and swam at the pool; this summer, her 7-year-old granddaughter is old enough to enroll and swim.

“I don’t know if staff will ever get to swim there again,” Leonard says, “but we’re happy that she’ll get to continue the family tradition of swimming at Reynolda. It’s really fantastic to think how many generations have been able to enjoy Mary Babcock’s hospitality.”

Renovation of the Reynolda House pool took place from June 2014 to February 2015. The first phase was abatement to remove lead paint from the metal ceiling braces, followed by the replacement of each pane of custom-made glass. Residue was scrubbed off of the tile on the pool deck, leaving a richly variegated green. Smaller tile inside the pool was buffed to a shimmer. As for those birdcages? They’ve been fully restored, but there are no plans to have birds in them. The Babcocks’ macaws, Polly and Major, spent most of their days in the kitchen, where they squawked “hello” when staff went in and out.