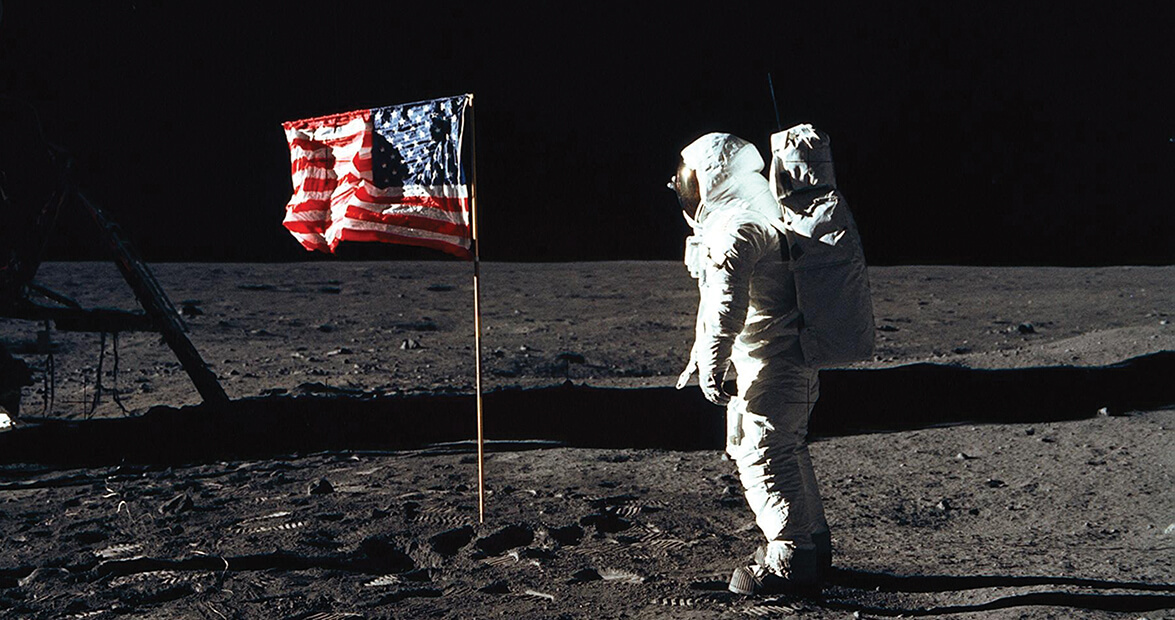 In the summer of 1969, a few weeks after Neil Armstrong and Buzz Aldrin became the first men to walk on the moon, a note went up on the bulletin board at Burlington Industrial Fabrics’ Plant Number 2 in the tiny Foothills town of Rhodhiss. The news spread quickly, first through the mill, then through the town. Soon, an article appeared in the nearby Granite Falls Press. But by then, everyone knew. The material that ended up becoming the American flag — the one planted in the lunar dust? The one Aldrin saluted? The one seen by a worldwide TV audience? That material was woven right here in this mill, on the banks of the Catawba River, in this hamlet of just a few hundred people.

Soon, a picture of the flag on the moon went up in the lobby of the mill. The story was repeated in newspaper articles throughout the 1970s, and at a town bicentennial celebration in 1976. In 1983, when the mill shut down, the story came up again. In 1988, Sherrie Sigmon interviewed 55 townspeople for a history of Rhodhiss. They talked about the pride they’d felt when they heard the news. By then, the story of the moon flag was being taught in local elementary schools. In 1995, a NASA administrator presented the town with a plaque and a small North Carolina flag that had been flown to the moon and back on Apollo 16. Although the plaque didn’t mention the Apollo 11 flag, it was a thank-you for the mill’s many contributions to the space program. Around that time, Rhodhiss decided to adopt its first town seal, which included an image of an Apollo astronaut standing next to an American flag. Town leaders ordered new green signs to place at the town limits. The signs included the astronaut image, along with the words: “U.S. Moon Flags Woven Here.” More recently, television crews and newspaper reporters have come around, usually on anniversaries of the landing, and interviewed former workers.

In 2014, Art Delaney, the new town manager, decided that the still-standing mill deserved a historical marker from the state. But when a woman from the North Carolina Department of Cultural Resources did some research and returned his call, she told him something that nearly knocked him out of his chair. She said that the story, the one that’d been circulating around Rhodhiss for nearly five decades, couldn’t be proven.

“We were blindsided,” says Sigmon. “We had no clue.”

Here’s what we know for sure. We know that industrial-strength fabrics woven at the mill in Rhodhiss certainly ended up in space, most notably in the heat shields of returning capsules and shuttles. We know that the moon flag itself was made of nylon. We know that the flag was almost an afterthought on the Apollo 11 mission, and that the design and assembly of the pole happened quickly, headed up by a NASA engineer named Jack Kinzler, who only had a few months to create something that could be easily set up by two men wearing space suits that limited their range of motion. Because of the rush, we know that the flag was not specially made or ordered. We also know that engineers cut the labels off the flags to make them fit onto the specially made poles, and that NASA itself has never confirmed their manufacturer. 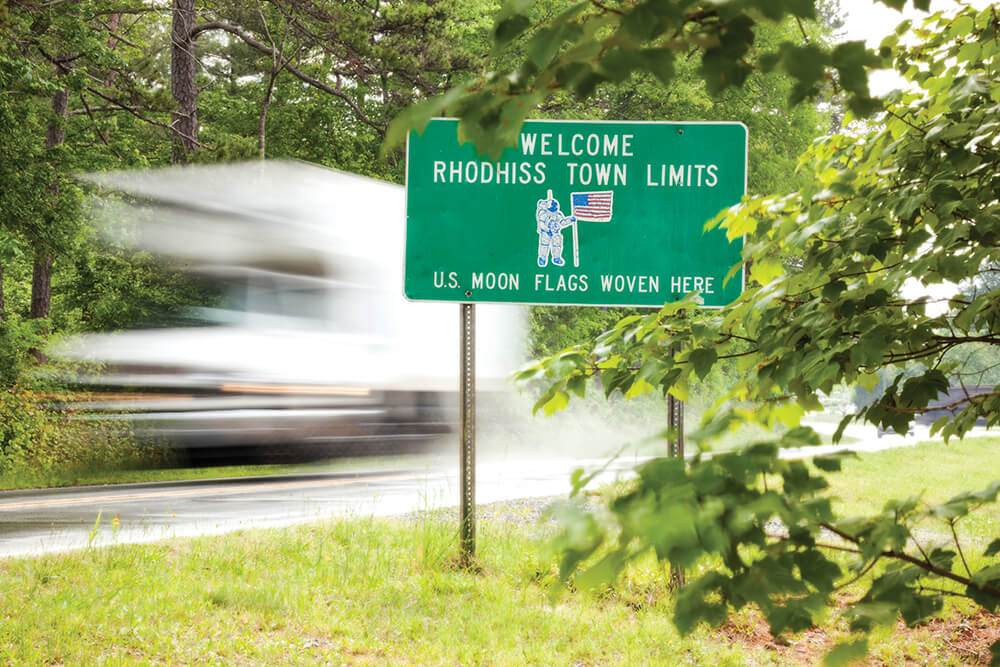 But that’s where the definitive facts apparently end; from there, the story splits and goes into two directions. One seems to be backed up by some notes from Kinzler himself, who died in 2014. The notes imply that the flag was bought out of a government catalog for $5.50. The supplier of flags to the U.S. government at the time was a company called Valley Forge. But another story, also told by NASA, hints that the flag was bought at a department store in Houston. When an executive from Annin, the country’s oldest and largest flag maker, called NASA, he was told that several flags were bought at Sears by secretaries during their lunch breaks. Annin was the official supplier to Sears.

Valley Forge and Annin didn’t weave the nylon themselves; they bought sheets of it, had it dyed, cut it, then sewed it into flags. So it would be possible to take a step backward, and simply find the mill that wove the nylon and shipped the sheets to the flag makers. Several former Rhodhiss workers say they made flag fabric, and at the time, Burlington was the world’s largest textile company.

But even here, things get complicated. Another textile company, Glen Raven, says the fabric that went into the Apollo 11 flag was woven at its plant in Burnsville, high in the Blue Ridge Mountains. Allen Gant, the company’s current CEO, says nearly all of the nylon being used in flags in the 1960s was manufactured by his company. “NASA didn’t want any one company being able to claim that the flag was theirs,” Gant says. “But we made the fabric for both [Valley Forge and Annin].”

It seems that, even though Rhodhiss and Burnsville are just 70 miles apart, and even though some people ended up working for both Burlington and Glen Raven, nobody in either town knew about the moon flag claim the other town was making. And nobody had heard of an exhaustive and definitive research paper written for NASA by Anne Platoff all the way back in 1992. It detailed the political and practical mechanisms that put the Apollo 11 flag on the moon. Platoff had pored through old archives, interviewed Kinzler and many others, and accumulated stacks of documents, before concluding that there was no way to prove the manufacturer.

There had to be more information. Something somebody missed. I started my own search. It took months. Sigmon sent me several packages of old newspaper clippings and documents, and gave me phone numbers of former workers. She sent emails with bits of information. I called Glen Raven, International Textile Group (which had bought Burlington), Annin, and Valley Forge. All searched for documentation, but none could produce any hard evidence. Bill Barry, a NASA historian, said smaller, more mundane documentation from 1969 may no longer exist. “The receipt for buying the flag,” he says, “probably wouldn’t have been saved.” Freedom of Information Act requests and phone calls to both NASA and the National Archives produced no new leads. Platoff went back through boxes and boxes of notes and documents to see if she could shake loose any new information. Nothing. There’s no proof that the material wasn’t woven in Rhodhiss, but she can’t say that it was. “Just because you can’t disprove it,” Platoff says, “doesn’t make it true.”

The proof may be elusive, but in their hearts, they know it’s their flag.

In March, Sigmon convened a meeting of 25 former employees to figure out what everyone remembered. Some of the workers hadn’t seen each other in years. It was a nice reunion. They remembered that their mill, for a time, made flag fabric, and that it was a supplier to hundreds of companies and agencies, including NASA. And all of them, every single one, remembered the posting on the bulletin board. It told them about the Apollo 11 flag, and its fabric. Their fabric. This story wasn’t just a rumor. It wasn’t hearsay. It wasn’t a joke. It came from the company itself.

But for now, that’s where the trail ends. To pick it up again, you’d have to know how managers at Burlington knew enough about the moon flag to post that note. Or you’d need to know, with certainty, whether Annin or Valley Forge made the flag, and who supplied them with woven nylon. You’d need to discover a document that nobody else has found, or a person that nobody else has talked to. These things might be out there. Until they’re found, the case has gone cold.

Sherrie Sigmon lets out a deep sigh. “The people of Rhodhiss have been living this for 47 years,” she says, “and then all of a sudden, you don’t have that, almost. It’s hard.” Sigmon’s father worked at Plant 2, making material that ended up in bulletproof vests, parachutes, bomb blankets, and space suits. She still believes. But her voice starts to waver. “This was the heart of what they did,” she says. Blayne Hollar, who worked at the mill from 1954 until it closed in 1983, repeats what several former workers told me: “We made the fabric of the first flag on the moon.”

Delaney says that even though plans for a historical marker are on hold, he knows that the story is true. “It was made here,” he says, unequivocally, before opening a filing cabinet at town hall and pulling out a square of white woven nylon. This, he says, came from the same batch as the moon flag. He then nods toward the NASA plaque on the wall. “How would NASA know about Rhodhiss?” he asks. “You don’t accidentally drive into Rhodhiss.”

The flag from Apollo 11 is no longer standing; Buzz Aldrin himself said that Neil Armstrong saw the pole blow over during liftoff from the lunar surface. And for a long time, scientists assumed that the rest of the Apollo flags had simply crumbled into dust. But in 2012, a lunar orbiter took pictures, and found something shocking. The photos showed specific shadows at the landing sites for Apollo 12, 16, and 17, confirming that those American flags were still standing, upright and intact, more than four decades later. They were all likely turned beige from relentless cosmic radiation. But they were still there. The people who’d always looked up at the moon and believed the flags still stood? After decades of being told they were wrong, they were finally proven right.

In Rhodhiss, too, the proof may be elusive, but the search goes on. The hope is still alive. And the belief has never wavered. In their hearts, they know it’s their flag. No matter what, that’s the truth.

From North Carolina to the International Space Station
Christina Koch grew up in Jacksonville and went to school in the Triangle. She tells Our State how she made it to her current home, 254 miles above Earth.