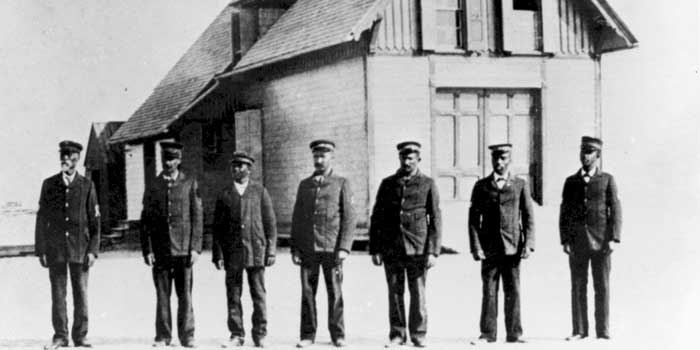 Standing on the Pea Island watchtower, Richard Etheridge peered into the darkness and driving rain, searching for the light a surfman reported seeing moments earlier. Beside Etheridge, the surfman, Theodore Meekins, lit a flare and waved it over his head. Both men willed the distressed ship — if, indeed, there was a ship — to signal again. The flare guttered out. No reply came from the south.

Etheridge, keeper of Life-Saving Station 17, asked for a rocket, lit its fuse, and launched it into the night, a red comet tail tracing its course against the black sky. The rocket exploded, its brief but brilliant light revealing nothing more than empty beach and pounding breakers.

Then, a red glow pierced the lashing rain. A ship
in distress.

Etheridge flew down the stairs, calling orders to his crew. As his men scrambled into their oilskin foul-weather gear, the seasoned keeper weighed his options: bring the surfboat or use the beach cart, made up of a mortar-like Lyle gun and special shot that would fire a line to the ship and allow them to haul passengers and crew to shore, one by one.

On the night of October 11, 1896, a hurricane had whipped the surf into violent breakers and riptides; launching the surfboat would be impossible. Etheridge and his men rushed to the beach cart and harnessed it to the mules. Winds and the sodden shore bogging them down, the seven men trudged with the cart down to the beach to where the E.S. Newman sat grounded on the shoals somewhere miles south of the rescuers.

“It’s a shame no one knows the story of the USLSS or Richard Etheridge. He was a remarkable man,” says David Zoby, coauthor of the book Fire on the Beach, which details Etheridge’s story as the first black keeper of a life-saving station and one of his all-black crew’s most daring rescues. “Spreading his story, that’s an honor long overdue.”

By the time he was standing on the Pea Island watchtower in the throes of a hurricane, Etheridge had proven his mettle time and again. He was born into slavery on Roanoke Island and raised alongside the children of his owner, John B. Etheridge, a prominent Outer Banks entrepreneur. The family even taught him to read and write, at a time when North Carolina law prohibited such instruction.

By the time Richard Etheridge was grown, the Civil War had brought freedom to the slaves on Roanoke Island, and soon afterward, at age 21, he joined the Second North Carolina Colored Volunteers.

Respected by his fellow soldiers, Etheridge was appointed one of four sergeants in Company F. He served in the Union Army for three years in Virginia and, at war’s end, returned home to Roanoke Island and reacquainted himself with the Outer Banks shoals, sandbars, and currents; studied the weather; and returned to hunting, fishing, crabbing, and progging (beachcombing for shipwreck scrap). When the USLSS opened seven stations along the Outer Banks in 1874, Etheridge signed on as a surfman and, in 1875, was assigned to the station on Bodie Island, part of a “checkerboard” crew, so called because it included both black and white surfmen.

Like other blacks in the USLSS, he held the lowest position in the station, the number six surfman. But he drilled with the equipment, studied USLSS regulations and procedures, and took part in the round-the-clock beach patrols. Knowing he needed to work harder than his white counterparts, he drove himself and became known as one of the better surfmen on the Banks.

The men in the Station 17 crew would need every skill they had mastered as they worked to rescue those aboard the E.S. Newman. According to Zoby and David Wright’s account in Fire on the Beach, Etheridge pushed alongside his men as they struggled to move the cart through the high-washing breakers.

Finally, Etheridge spotted the three-masted schooner. It sat on a sandbar close to shore, maybe 50 yards out. But those 50 yards were the province of high breakers churning with debris. Etheridge directed his men to ready the shot; they were already in action. In less than five minutes, they expected to be ready to fire a line to the ship and begin pulling in passengers and crew on the breeches buoy.

Two surfmen grabbed the Lyle gun and searched for a place to anchor it, but the rushing tide threatened to wash it out to sea. Waves destroyed their attempts to shore it up on a mound of sand. They searched in vain for higher, sturdier ground. Frustrated, Etheridge and his crew stared helplessly at the Newman. The ship’s doomed crew returned their gaze.

Throughout Etheridge’s early career as a surfman, the Outer Banks suffered a series of failed rescue attempts that resulted in hundreds of lives and millions of dollars of cargo and ships lost. According to Fire on the Beach, an investigation revealed widespread corruption and dereliction of duties among keepers and surfmen. But one bright spot stood out. “Such as are surfmen, [blacks] are found to be among the best on the coast of North Carolina,” wrote USLSS Assistant Inspector Charles Shoemaker.

His fellow inspector, Frank Newcomb, observed the same, and the two wrote a letter to Sumner Kimball, superintendent of the USLSS (which merged with the Revenue Cutter Service in 1950 to form the United States Coast Guard), recommending that Etheridge be appointed keeper of Station 17. “[T]aking him all in all, [he] seems to be a superior man for the position,” Newcomb wrote.

In early 1880, the service promoted Etheridge to keeper of Station 17. Almost as soon as he arrived, four white surfmen walked out. Station 17, with the first black keeper, became the only all-black Life-Saving Station in the nation.

With his pick of the best black surfmen on the Banks, Etheridge filled his crew easily. Daily they drilled with military precision. In May 1880, after the life-saving season — which ran from fall through spring — ended, arsonists burned Station 17 to the ground. Undeterred, Etheridge drilled his men harder. As a leader, his job was to ensure that each man knew his job, and the job of his brothers, inside and out. His men did.

During the 1890s, Etheridge led his crew to many successes — such as the rescue of the J.W. Gaskill and righting the capsized Rosa Cora in the Pamlico Sound — and a few tragedies — such as the Lizzy Haynes, where five passengers died.

On that October night, when a hurricane prompted other keepers to shutter their stations or seek safe shelter, Etheridge led his men into the storm. The surfmen huddled and awaited Etheridge’s orders. None came. Instead, according to Zoby and Wright’s account, Etheridge asked for volunteers. The only hope, Etheridge decided, was to send two of his men into the surf in an attempt to reach the ship. He would not order his men to accept this task. He didn’t need to. Two surfmen — Meekins and Stanley Wise — stepped up first.

Keeper Etheridge took eight feet of line and tied the men, one to the other. With another line, he attached his swimmers to the cart on the beach. He gave Meekins a heaving stick, attached to yet another line, to toss aboard the ship when they were close enough.

Meekins and Wise, stripped of their rain gear and wearing cork life belts, waded into the surf. The waves assaulted them, drove them back, pulled them down, knocked the breath from them. They clawed their way forward through the cargo and planks breaking lose from the crumbling ship. Half swimming, half wading on the shifting sandbars, the pair inched toward the Newman.

Reaching the schooner, Meekins and Wise scurried up a rope ladder to the deck. The men tied the heaving stick’s line to the ship, took the captain’s toddler son in their arms, and made the trip to shore. Handing the boy to Etheridge, they reported what they saw: nine aboard, shaken and exhausted.

The keeper looked around for another pair of volunteers. Meekins, drenched and full of adrenaline, stepped forward. He was tied to surfman Benjamin Bowser; they hauled themselves to the ship on the line.

The surfmen successfully rescued all the passengers and crew aboard the E.S. Newman. Back at the station, Etheridge wrote in his logbook: “Although it seemed impossible to render assistance in such conditions, the ship wreck crew was all safely landed.”

As the weather cleared, Station 17’s keeper and surfmen, along with the crew of the Newman, made their way south to see if the schooner was salvageable. It was not.

On their walk back to the station, the Newman’s captain found the ship’s nameplate, which he presented to the surfmen of Station 17 as a token of his gratitude.

For 100 years, the plate was all the recognition the men would receive. Finally, in 1996, the U.S. Coast Guard posthumously awarded Keeper Richard Etheridge and his surfmen the Gold Lifesaving Medal, the service’s highest peacetime honor.

Keeper Etheridge stayed at Pea Island until 1900, when, as Bowser wrote in the weekly log: “Keeper Richard Etheridge Died at this station at 10 minutes to 7 o.c. a.m. to day. Disease, likely carried by the mosquitoes from the sound, did what no war, rescue attempt, or human hostility could.”

The United States Life-Saving Service operated seven stations on the Outer Banks. The Chicamacomico Life-Saving State Historic Site in Rodanthe will commemorate the contributions of service members in its centennial celebration on August 4.

Home of the century-old 1911 station house, the site also includes another station house built in 1874, the first U.S. Life-Saving Service station built and manned in North Carolina. Both stations house artifacts detailing the daily life and heroic rescues performed by the men who served at these posts. Costumed reenactors will bring the history of the stations to life.

Weekdays during the summer, the staff provides interactive programs for visitors, including the Breeches Buoy Rescue Reenactment, where Coast Guardsmen perform the complete drill, just as Keeper Etheridge and his surfmen would have 125 years ago. The Chicamacomico Life-Saving Station Historic Site is the only place known in the United States to perform the drill in its entirety.

The Pea Island Life-Saving Station Cookhouse has been refurbished and now stands, with a statue of Richard Etheridge, as a tribute to the contributions of the station’s crew to the USLSS. To arrange a tour of the Pea Island Cookhouse, please call Frank Hester in advance.