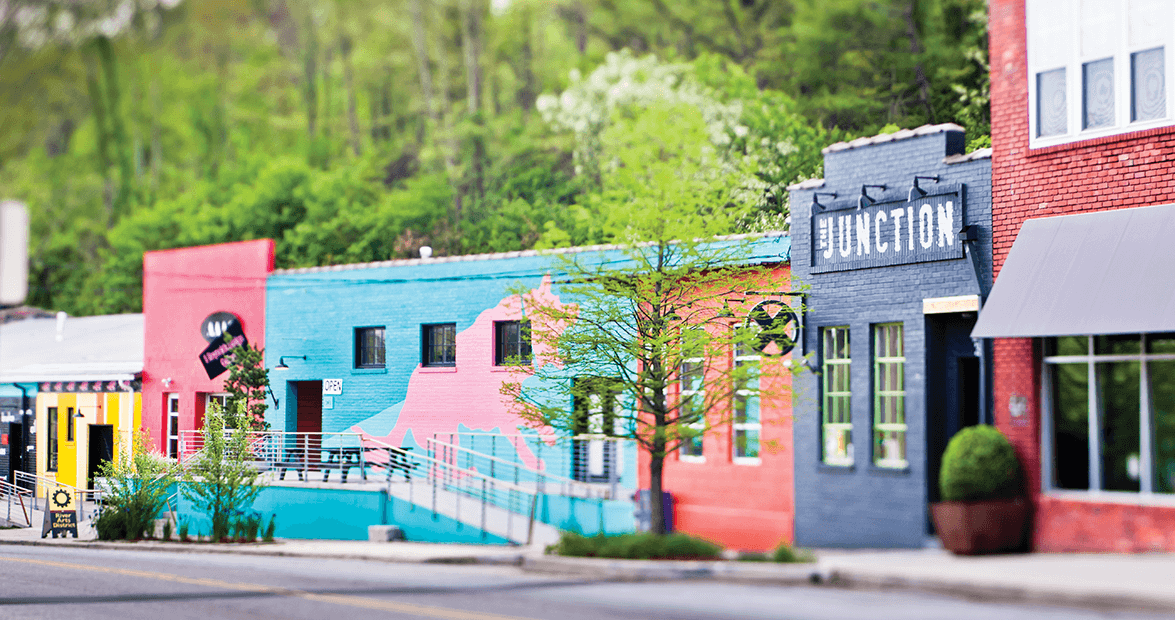 It takes less than 15 minutes to walk the entire River Arts District from end to end.

It’s only a mile by a half-mile. Yet, within this small area comprising 18 buildings, more than 165 artists and crafters are at work.

There are potters and painters here. Sculptors and blacksmiths. Weavers and dyers. Glassblowers and furniture makers. Nearly everything you see here is handmade on site.

In the 1980s, the old, industrial area around the French Broad River in Asheville attracted artists seeking low rents and large, open spaces. The former textile mills were ideal locations. These artists began to transform the historic structures into working studios and showrooms. Now, more than a century after the first textile factory was built, the area is in the bloom of another crafting renaissance. 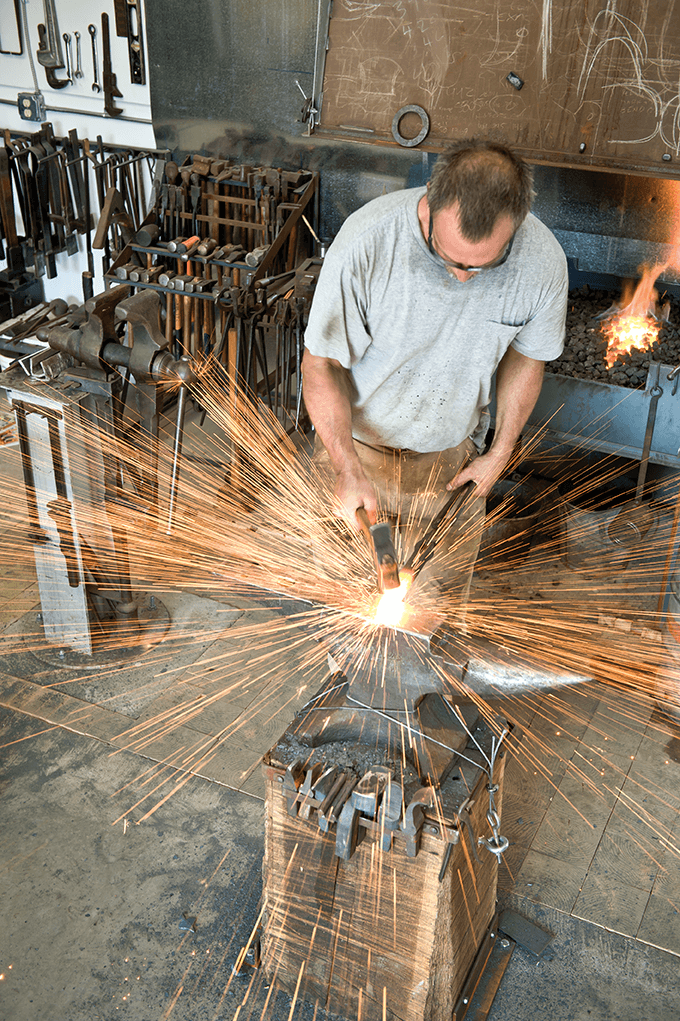 On the steps of the Cotton Mill Studios, fiber artist Barbara Zaretsky watches a car pull into the parking lot. Normally she waves. But at the moment, her arms are elbow-deep in a pot of churning, murky water, hand-dyeing a batch of patterned scarves.

The Cotton Mill building is one of the oldest structures in the district. Part of a complex built in 1887, the two-story, brick factory produced denim and flannel. In its heyday in the early 20th century, the cotton mill employed more than 300 people.

The Great Depression dealt a blow though, and the mill limped along until it finally shut its doors in 1953. Then, a fire swept through the entire complex in 1995, burning most everything to the ground. But the Cotton Mill building survived.

Now it’s one of the busiest studios in the district, home to 12 artisans.

Zaretsky shares a wall with two weavers, who share a wall with two potters. Above Zaretsky, there are landscape and oil painters and a stained-glass artist. Furniture-maker Darren Green bought the building next door two years ago. His business, The Old Wood Co., creates tables and chairs and stools out of reclaimed barn doors and whiskey barrels.

A block down the road, the smell of barbecue from 12 Bones Smokehouse drifts through the air inside CURVE Studios. Akira Satake, an award-winning ceramist who rents a studio at CURVE, is still getting used to it. 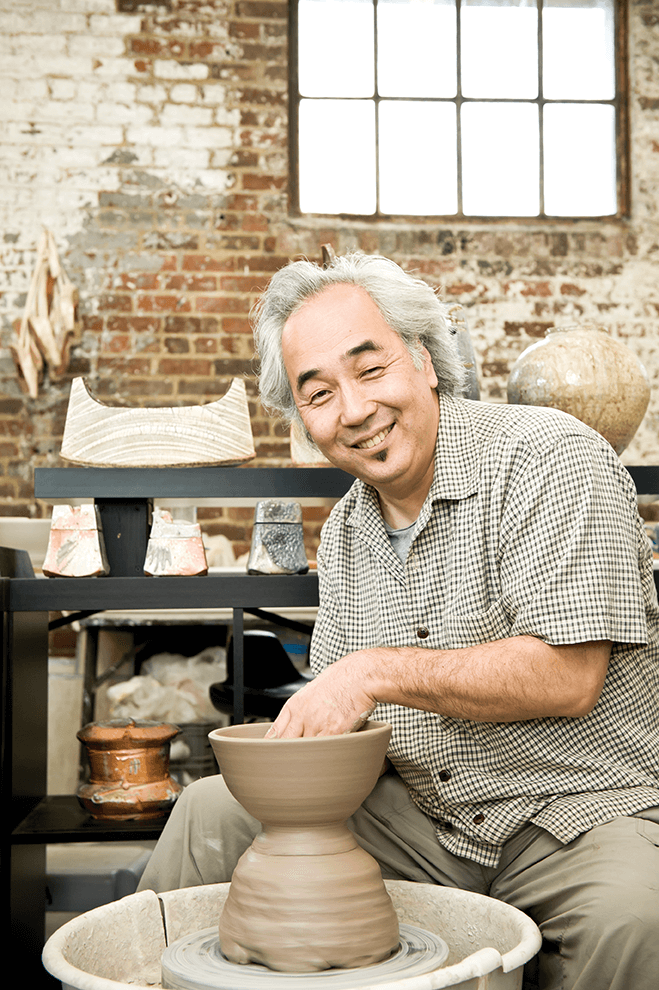 Satake shares the studio space/showroom with Maria Andrade Troya, another ceramic artist. Troya has been renting a place at CURVE for more than 10 years. She’s watched the River Arts District evolve, and one of the main differences now is food. It’s as easy to find a shrimp taco or a latte as it is to find a handmade wine glass. Recently, the district even got its first food truck, Tin Can Pizzeria, which serves artisan pizzas.

Troya guides her hand around a spinning, raw lump of clay, turning it into a teapot as she talks.

Visitors come in and talk to her while she works. From her stool in front of her wheel, she sits and chats with anyone who wanders in. If they’re interested, she’ll give them a quick demonstration. In fact, that’s what drew her to pottery in the first place.

“It’s communal,” she says. “When you draw, you tend to need to be by yourself. [With] pottery, you can actually talk and work.”

The French Broad River is older than the Blue Ridge Mountains that tower over its banks. It’s so old, in fact, that very few fossils are buried under its waters.

Railway workers laid the first tracks along the French Broad in 1879. Asheville’s population was barely 500 people. By 1900, it was 10,000. The trains brought people, but they also carried the raw materials that would shape this district for decades.

Standing in front of his easel inside The Lift Studios, painter Daniel McClendon stops to watch a train lumber by the window. Last summer, McClendon and his wife bought the old cracker factory on Depot Street. The structure, originally built in 1907 by the National Biscuit Company (Nabisco), sat empty and unused for years. “It was in nasty shape,” he says. “At first, I didn’t even want to walk into it.” 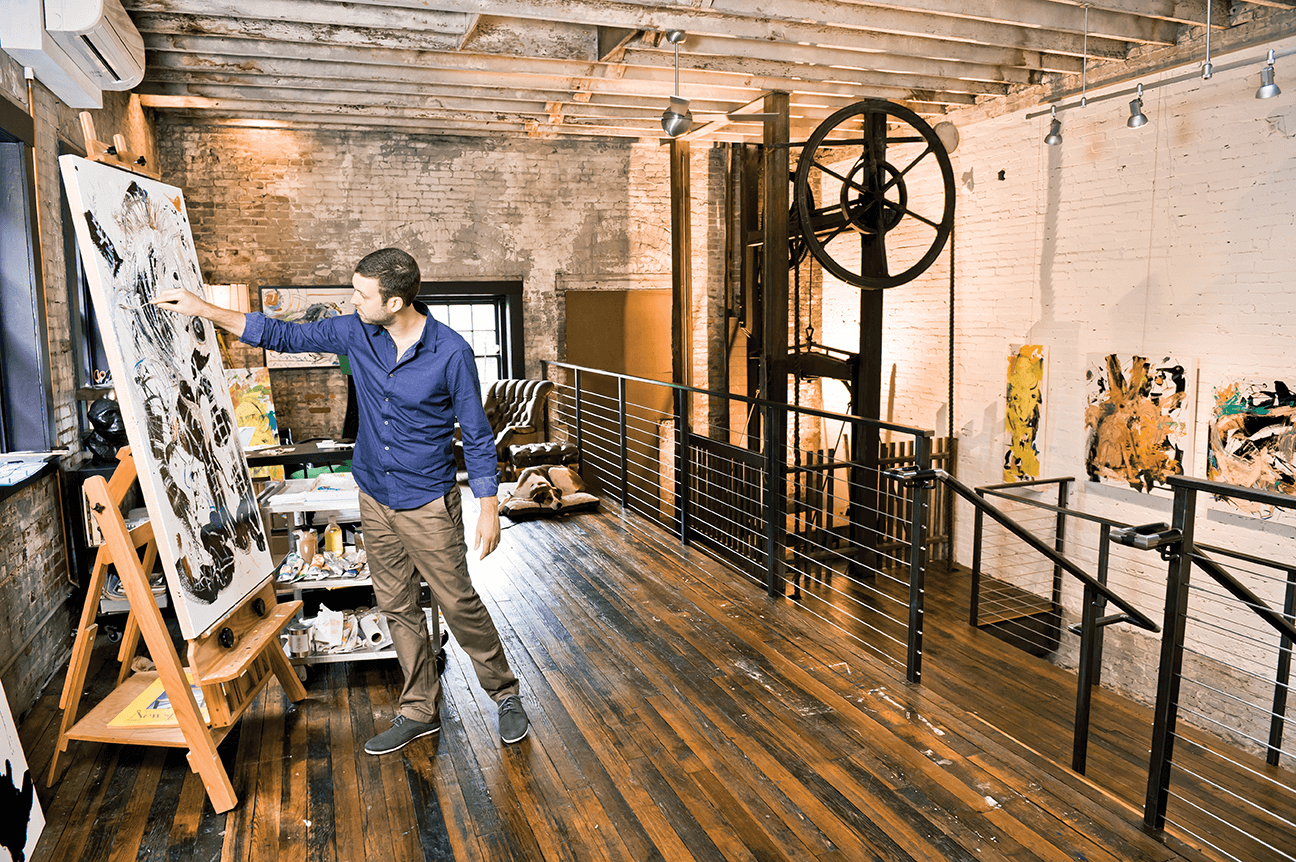 But he liked something about it. As soon as renovations began, he uncovered the building’s hidden beauties: the rustic brick and stone walls, the aged hardwood floors, the exposed ceiling beams.

In the corner of his studio/gallery sits the prize of the building: the original, hand-operated freight elevator, once used to lift bags of flour. The relic is both a glimpse into the past and a sculptural centerpiece. McClendon was so enamored with the antique, he named his studio — Lift Studios — after it.

“It’s an ode to the history of the building,” he says. “To its change. Its evolution.”