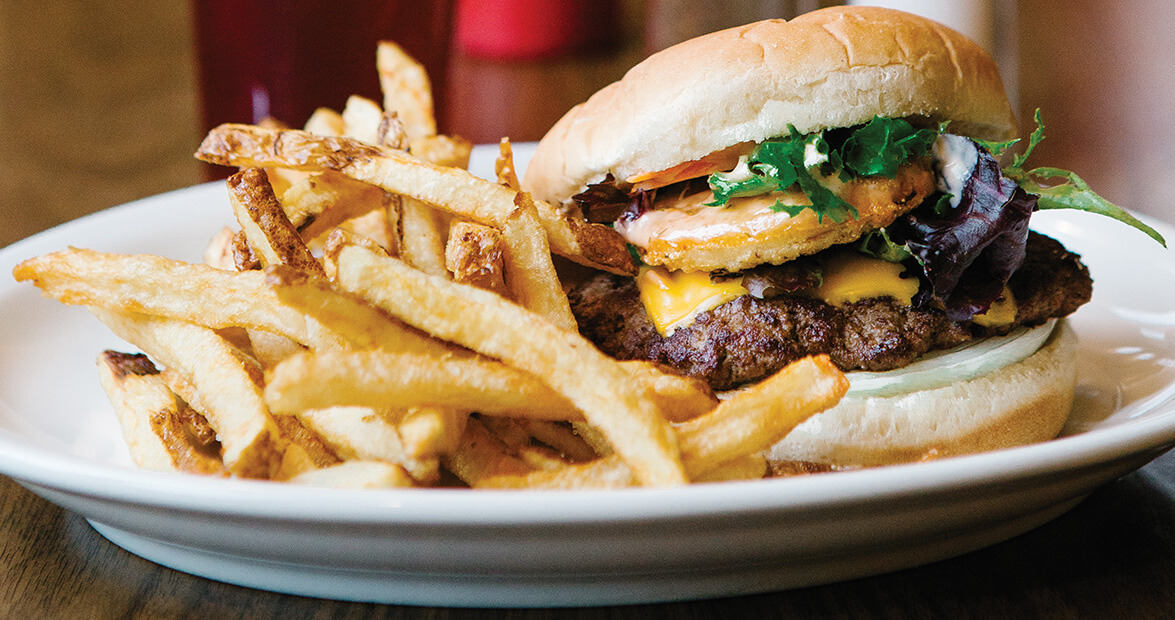 Some days a No. 6 combo at Wendy’s just won’t do. Neither will the Chick-fil-A fries that look like a hashtag or two allbeefpattiesspecialsaucelettucecheesepicklesonionsonasesameseedbun. On those days, you need a counter with pale green leatherette and silver-sided spinning stools, or a speckled Formica two-topper, or a curved corner banquette, or a wooden chair with that low rung you can hook your heels over, or a lazy Susan that revolves four kinds of hot sauce plus one you’ve never heard of.

Because there’s a difference between fast food and road food.

Some day, some meal, some long stretch of macadam or asphalt or concrete, you’re going to picture that granola bar moldering in the glove compartment; the banana — which everyone knows makes a terrible traveling companion — on the console; the homemade, tinfoil-wrapped egg salad sandwich growing flatter and flatter with every mile (and possibly, the mayonnaise getting a wee bit too warm for safety?), and you’re going to crave an alternative.

Because there’s a difference between home food and road food.

Some day, some low moment of misery and self-loathing, you’re going to regard the crumpled white Cheddar cheese popcorn bag on the floor mat, the miniscule sour cream and onion potato chip specks in the crevices of your automobile upholstery, the squashed chocolate milk carton on the dash, or the juice can in the cup holder — even if it’s mildly verging on healthy, like a V8 — and long for a real meal.

Because there’s a difference between convenience store food and road food.

Road food is real food. Ordered from a menu that isn’t illuminated above your head, but more likely laminated and stuck between the napkin dispenser and the Texas Pete. If you’re lucky, road food has one of those ice machines that dispenses small, air-filled, perfectly crunchable pellets. Road food rarely does takeout, though in a pinch, the owners might be able to put your meat ’n’ two in a compartmentalized Styrofoam box.

Road food encourages sitting. You can hustle on down the highway if you like, but you might miss something if you do. You might miss the Peppermint Patties in a bowl at the cash register, or the local circulars strewn on various surfaces, with real estate and livestock and local band sales and announcements. You might miss the scalloped paper place mats printed with tic-tac-toe and connect-the-dot games, or fun facts about North Carolina down the side. You might miss the postcards customers have mailed from other states and Christmas cards sent by regulars, all tacked or taped to the wood paneling. You might miss the waitress who’s been there for 20 years.

Fast food doesn’t have views from the windows. Or characters behind the counter. Or a printed history of the place, shellacked and yellowing, hanging near the entrance. Or framed newspaper articles — or a dollar bill, a Jaycee award, an Eagle Scout ceremony — positioned just above the gum or Hot Tamale dispenser.

Fast food doesn’t do rockers. Or porches. Or, in any authentic context, pie.

It’s pleasant, sometimes, and a good and necessary thing, to look beyond the familiar logos replicated on the blue metal interstate signs, and take a road less traveled by hungry hordes. Pleasant to seek out the hole-in-the wall or the known-by-all. Pleasant to experience cloth or wood against your thighs, and forks and knives made of metal instead of plastic in your fingers. Pleasant to find what your wife won’t cook or your children won’t eat, or your doctor won’t recommend, but that will nevertheless and forever remind you of a time, a person, an experience: Salmon croquettes. Pinto beans. Meatloaf. Squash casserole. Or to find what you came for: the famous mountain trout. The storied sausage. The secret-recipe slaw. The legendary limas.

Road food is Worth-Your-While food. Worth your detour. Worth your wait. Worth finding WiFi to type “local” on Yelp. Worth the initial grumble from the soon-to-be-delighted adolescent. Worthwhile is a synonym for delicious and classic and unique.

If you’re really lucky, the salt shaker will be the old-fashioned eight-sided glass kind that you can practice balancing at a gravity-defying angle on tiny granules of salt. Someone will bring you a new knife when you drop yours on the floor. The butter pecan ice cream will come out in one of those metal cups iced with frost. Your children will recoil at the slice of yellow cheese atop the apple pie, and you’ll point out the fried bologna on the menu as a touché.

You’ll be able to order fried chicken and actually recognize the drumstick.

Road food is a respite from routine. In eateries cozy and noisy, or spacious and quiet; filled with families, or loners with iPads; serving burgers only, or starters to à la modes. True road food is out there, not far from the madding crowd of fast food. On this trip, take time to discover, stop, and savor.

Four for the Road 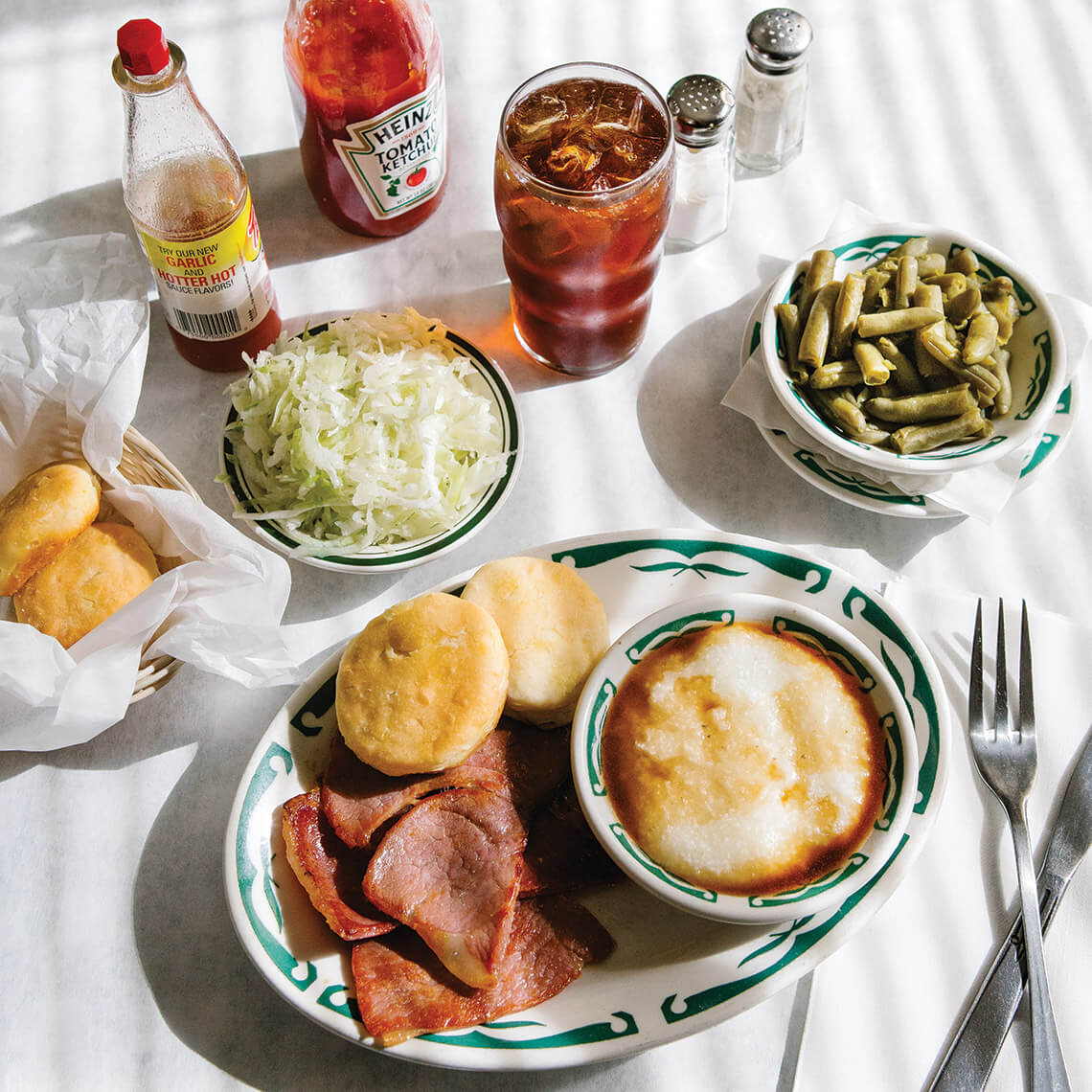 Just inside the screen door of Caro-Mi Dining Room, owner Dane Stafford greets customers with a smile and a menu.

Located in Tryon on the Pacolet River, Caro-Mi Dining Room has played host to generations of travelers.

If you’re wondering how the restaurant got its unusual name, Stafford says the original owners, the Mahafeys, who moved up from Miami in 1945, created the name by combining Carolina and Miami.

When Stafford’s parents, Charles and Annette Stafford, bought the place in 1990, a portion of the sales contract detailed the restaurant’s top-secret coleslaw recipe. Don’t even try to pry it out of Stafford — he can’t tell you — but the first bite offers a tangy, vinegary clue.

Other menu highlights include the rainbow trout, filleted, boned, and drenched in butter with sliced almonds — a presentation prepared right at the table before serving. And the homemade biscuits? They’re just waiting for smooth apple butter. 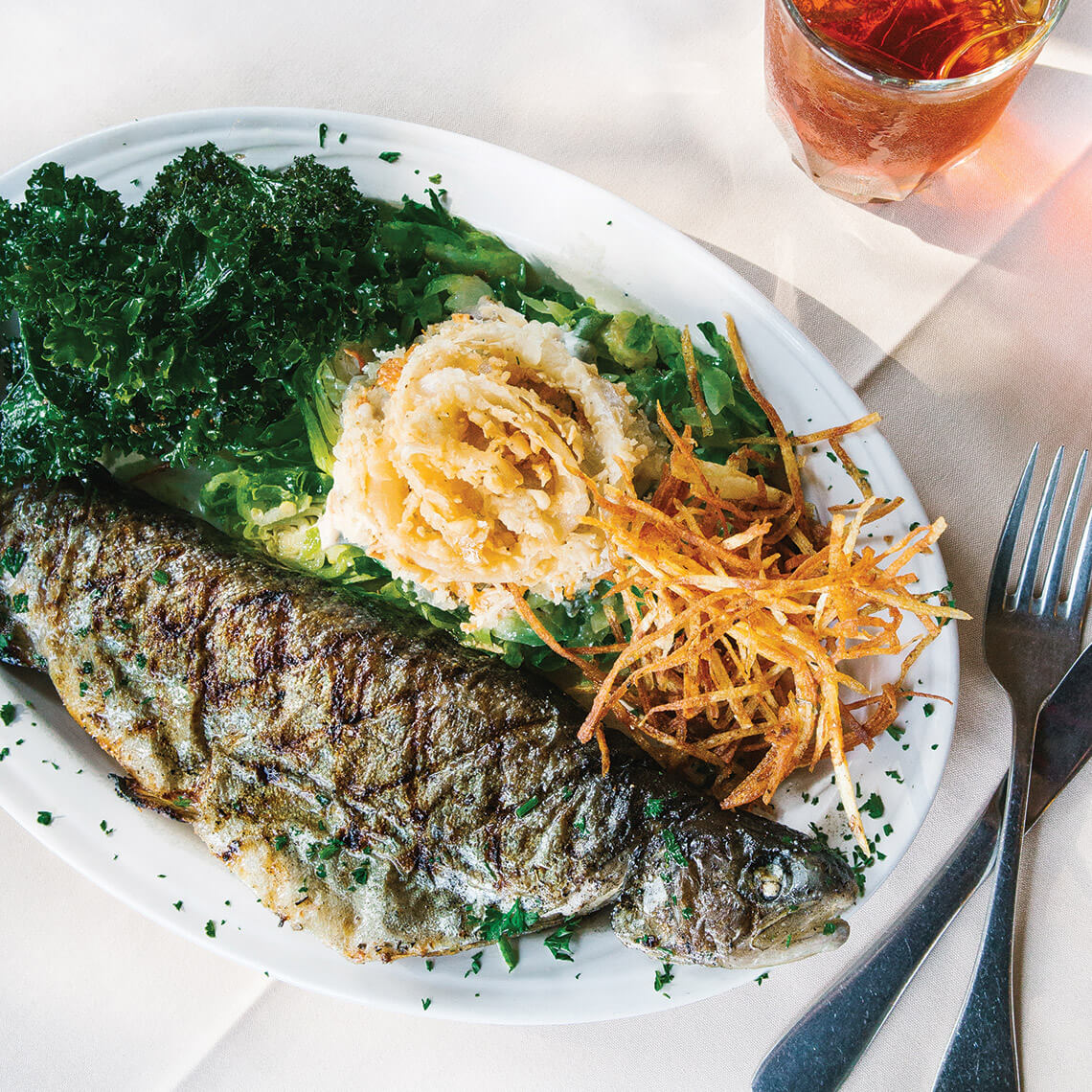 Part of the intrigue of driving up the Blue Ridge Parkway rests in being a part of the mountain itself, blue hills standing watch in the distance and nothing but nature all around — except at mile marker 408.6 north of Brevard. That’s where the Pisgah Inn Restaurant reaches out to capture a stunning view at 5,000 feet.

Windows line every wall of the restaurant, so nothing is shut out, and quilts decorate the ceilings and walls, adding to the Appalachian aura. “We don’t bet on the view,” says owner Bruce O’Connell, whose family has owned the Inn since 1978. Staff members bake the bread; make their own dessert; and offer fresh vegetables, fresh trout, and fresh-cut meats.

Locals and out-of-towners come back year after year during open season from April 1 to October 31. “Pisgahteers,” as some call themselves, use any excuse to savor some old favorites. 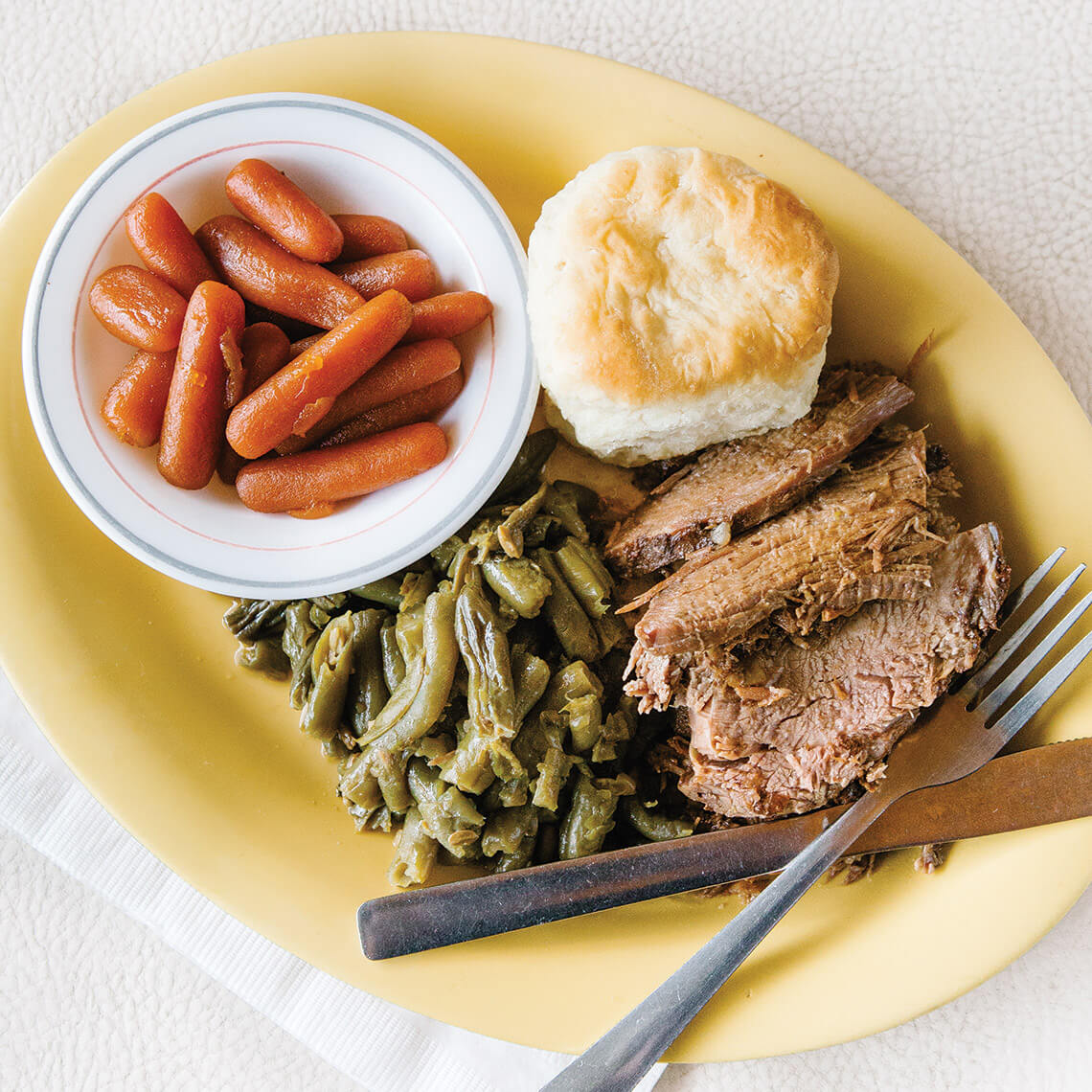 “We make everything from scratch,” says Shirley Yager, whose family has owned Famous Louise’s Rock House Restaurant for more than 30 years. (Shirley is Louise Henson’s daughter.) “The other day I made 98 jars of jam.” Her high-energy voice speeds through the list of jams and jellies she makes. Whatever is in season: blueberry, strawberry, peach, and the legendary strawberry-rhubarb. On a whim, she made pineapple jam one day, thinking it wouldn’t do well, but it, too, became a hit.

In the middle of the road where U.S. Highway 221 North intersects N.C. Highway 183, the sand-colored rock building sits smack in the middle of three counties. You can eat in McDowell County, use the bathroom in Burke County, and pay the bill in Avery County. Built in 1936, the building — originally known as the Linville Falls Tavern — sports a plaque from the National Register of Historic Places.

Besides Yager’s jams, patrons stop in for everything from baby back ribs to steaks and seafood. And dessert, like scratch-made strawberry-rhubarb pie, is simply delicious. 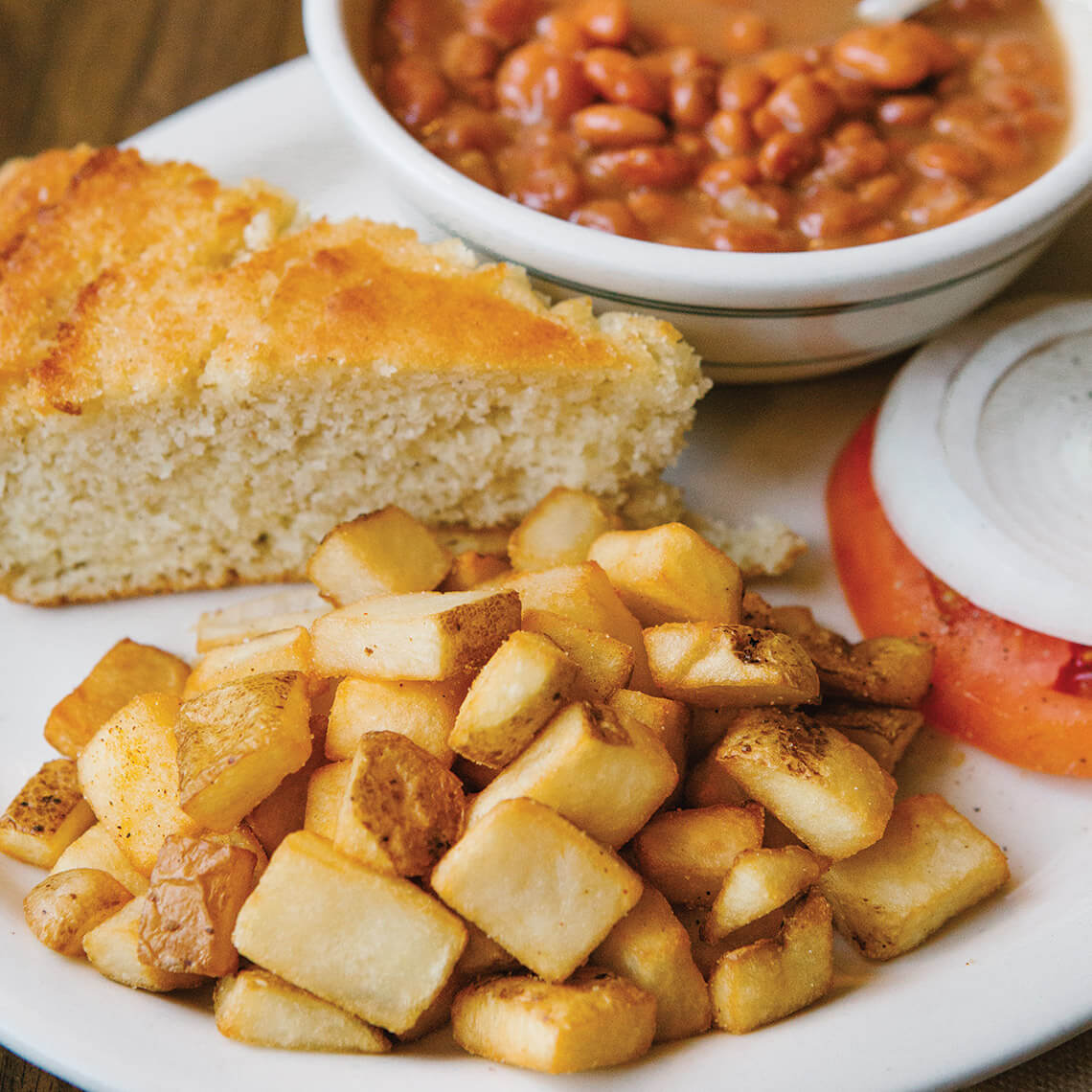 In Mitchell County, you’re bound to get hungry from shopping the art galleries and pottery studios. So as you pass through Loafer’s Glory going up N.C. Highway 226, start looking on the right for Helen’s. A red sign with white lettering on the storefront, plants hanging outside, and a round table for outside dining will clue you in. The restaurant has been there for more than 60 years, so anyone can direct you if you ask.

Long known for hamburgers and hot dogs, Helen’s morphed into a breakfast, lunch, and dinner place with seafood and vegetables when Tom and Glenda Meeler bought it three years ago. But the Meelers have let changes come gradually. The restaurant looks the same inside with original booths, lights, and red-topped counter stools. The old favorites keep a place on the menu, but Glenda has added a few new things.

A specials menu each day includes home-style dishes such as pinto beans, cornbread, and onions. The “soup beans,” as your grandmother may have called them, are the real deal. Cooked long, but not mushy, and not too dry, they have plenty of liquid to soak the corn bread. It’s just the type of family food that makes you feel like you’ve come home.