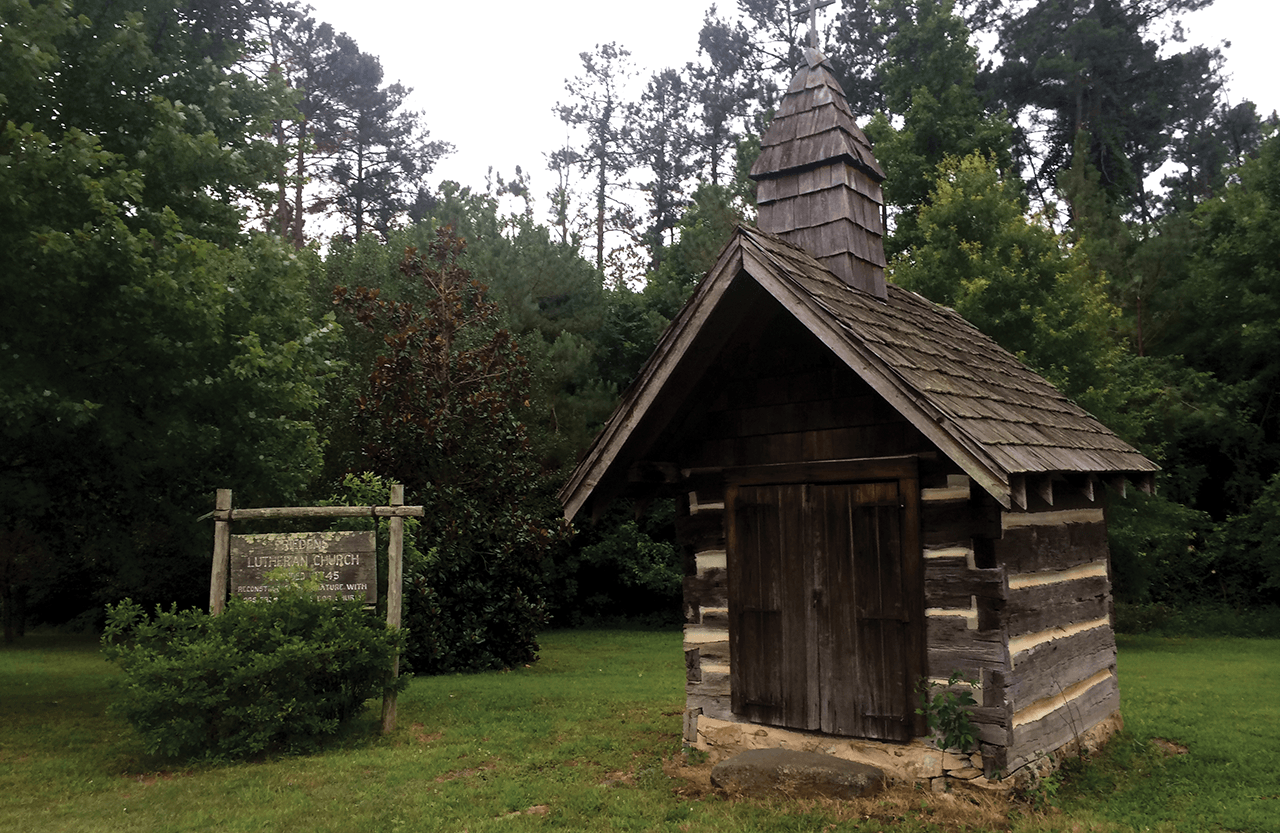 I’m lost. Of course, it’s easy to get lost in the mountains of western North Carolina, where huge, dense forests dominate the landscape. Where narrow two-lane roads wind up and down and around hills that look just like every other hill you’ve driven up and down and around for the past half hour. Where often you can drive for untold miles without seeing a single road sign or a remotely familiar landmark, much less an actual human being who might know.

So, yes, it’s easy to get lost here, but that’s little consolation when you’re, well, lost.

My destination on this gorgeous day is Trust, a tiny community in the southwest corner of Madison County. It’s not far from Luck, another minuscule dot on the map, but there’s been no sign of Luck, either. A better landmark may be Asheville, which sits about 30 miles south of Trust and, at the moment, is a speck in my rearview mirror.

More specifically, my destination in Trust is St. Jude’s Chapel of Hope, a small roadside chapel that’s become something of a destination for people of faith — those who know of the miracle that inspired the chapel’s creation — as well as tourists who simply want to visit the charming little house of worship. In North Carolina, at least, St. Jude’s is the rock star of roadside chapels, so as a journalist — and as a man of faith — I want to see and experience the place for myself.

Beverly Barutio built the chapel and opened it to the public in 1991, fulfilling a promise she’d made to God during a fierce battle with cancer. When chemotherapy proved no match for her relentless advanced-stage cancer, Barutio abandoned her treatments and turned to her faith for healing instead. She prayed to God — and to St. Jude, the patron saint of lost causes — promising that if she recovered from the cancer, she would build a chapel to honor them. 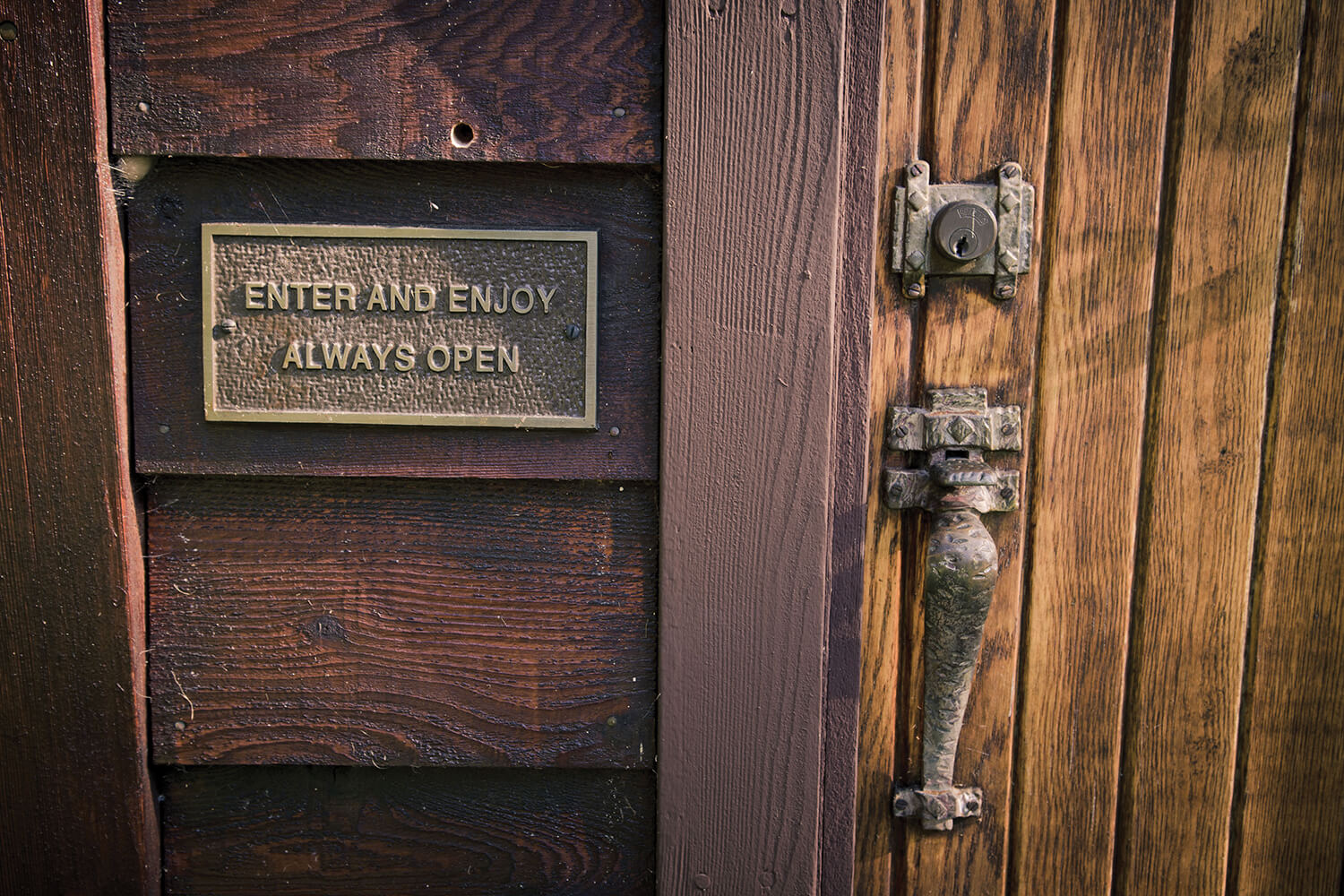 Barutio has since died, but the quaint chapel remains open to the public around the clock, even under new ownership. Each year, thousands of people visit the chapel, and I hope to join that number. However, I’m currently navigating what I believe to be N.C. Highway 63, along which the chapel sits, but which now appears to be more of a long, winding driveway than a highway. For at least the past 10 miles, I’ve seen no road signs, no landmarks, and no people. I have to believe I’ve missed a turn somewhere — or made a turn when I shouldn’t have — and am no longer on N.C. Highway 63.

This may be a job for St. Jude — you know, the patron saint of lost causes.

Life can be like this, too — feeling like you’re one small car navigating a vast, dense forest. Feeling lost on narrow, winding roads that look just like a lot of other narrow, winding roads you’ve traveled. Wandering for untold miles without seeing a single sign or familiar landmark telling you where you are or where you’re going, much less someone whom you can flag down and ask for directions.

And all the while, what you’re looking for could be right around the next bend in the road.

As I wander this interminable mountain road — and wonder what road it really is — I think back to a couple of roadside chapels I visited earlier in the week. One of them, the Little Chapel of God’s Love, can be found on N.C. Highway 62 near Trinity, in Randolph County. The other, which has no formal name, sits on the property of Friedens Lutheran Church, located on N.C. Highway 61 in the Guilford County town of Gibsonville, not far from the Alamance County line. Neither of these chapels has the fame of St. Jude’s, nor the miraculous backstory or scenic surroundings. In fact, they’re pretty easy to miss if you’re not paying attention.

Though the tiny chapel in Gibsonville stands about 15 feet tall — and has a steeple and cross on the roof — the interior is only about the size of a bathroom. A pulpit in the front of the chapel and four scaled-down pews — each of which sits one person — leave little room for congregating. But then, roadside chapels such as this one aren’t meant for congregations — they’re meant for individual worship. Prayer. Quiet reflection. Scripture reading. (There’s a Bible on the pulpit.)

When members of Friedens Lutheran Church built the structure in 1961 — using timber from the original log church erected in 1745 — they intended for it to be merely a replica of the original structure, a way of paying homage to the church’s history. But just as those logs were repurposed, so, too, was the structure itself, and the small building became an impromptu prayer chapel. Visitors from as far away as New York, Michigan, and Florida have spent time there and signed the guest book.

“It’s a nice little place where you can go for a bit of meditation,” says Rev. Bill Zima, pastor of Friedens Lutheran. “But it’s a lot like a closet because it’s so small, so I wouldn’t go in there without leaving the door open if you’re claustrophobic.”

The Little Chapel of God’s Love, once a smokehouse, has also been repurposed as a roadside chapel. Visitors who look up can still see the ceiling hooks that were used to hang slabs of meat. About 40 years ago, a local woman named Kathryn Mendenhall Smithey acquired the old structure and moved it to its current location on N.C. Highway 62 near Trinity, to be used specifically as a prayer chapel. She has since died, but the chapel remains her legacy, a peaceful haven for neighbors and passing motorists who want a few minutes of solitude for spiritual reflection.

The chapel sits only about 50 feet off the highway, but even as cars zip by, peace fills the room, which is about the size of a bedroom. A four-foot-tall wooden cross hangs on the front wall above the altar, and several small pieces of religious art adorn the chapel. In one corner stands a lectern bearing an old King James Bible. Six short wooden benches — each of which can seat two or three people — serve as pews.

On the altar, several spiral-bound notebooks and pens have been left for visitors to write their prayers and reflections in. “Lord, I pray today for my friend Charlie,” one visitor wrote last September. “He is dying of cancer — I was told he has just a few days left.” “I saw this little church from the road as I passed by,” another visitor wrote in an undated note. “I turned around to come have a look. I prayed about my life and my future and my family. Thanks for this little chapel.”

The notebooks are full of such messages — heartbreaking prayers for healing, earnest pleas for divine guidance, simple words of gratitude. Reading through them, I’m struck by the fact that although many visitors simply saw the chapel as they were driving by, many more were very intentional in seeking this place to share their innermost feelings.

Which brings me back to my own intentional quest in the North Carolina mountains.

Did I mention I’m lost?

Well, it turns out I’m not actually lost — I just don’t realize how close I am to my destination.

As I drive, fretting over my whereabouts, I make up my mind that I’ll defy the stereotype of men who don’t ask for directions and, well, ask — if I can just find someone to ask. Sure enough, as I round the next curve, I spot a car turning in to a gravel driveway, and I pull in behind it, hoping the driver won’t think me a stalker.

Then I notice the small cedar building beside the driveway, with a belfry extending from its slanted roof. A wooden sign to the side of the structure confirms what I have suddenly suspected: St. Jude’s Chapel of Hope.

And then this: “I will lift up mine eyes unto the hills from whence cometh my help.”

The peace begins to envelop me as soon as I get out of my car. Leaves wave gently in the breeze, and a creek running behind the chapel offers the soothing sound of rushing water.

Inside the chapel, sunlight filters through several stained-glass windows and illuminates the room. Four wooden pews, each bearing a cross in the seat back, provide seating for eight visitors. A kneeling bench sits at the foot of the altar, where visitors can find a Bible, a hymnal, or a prayer book. 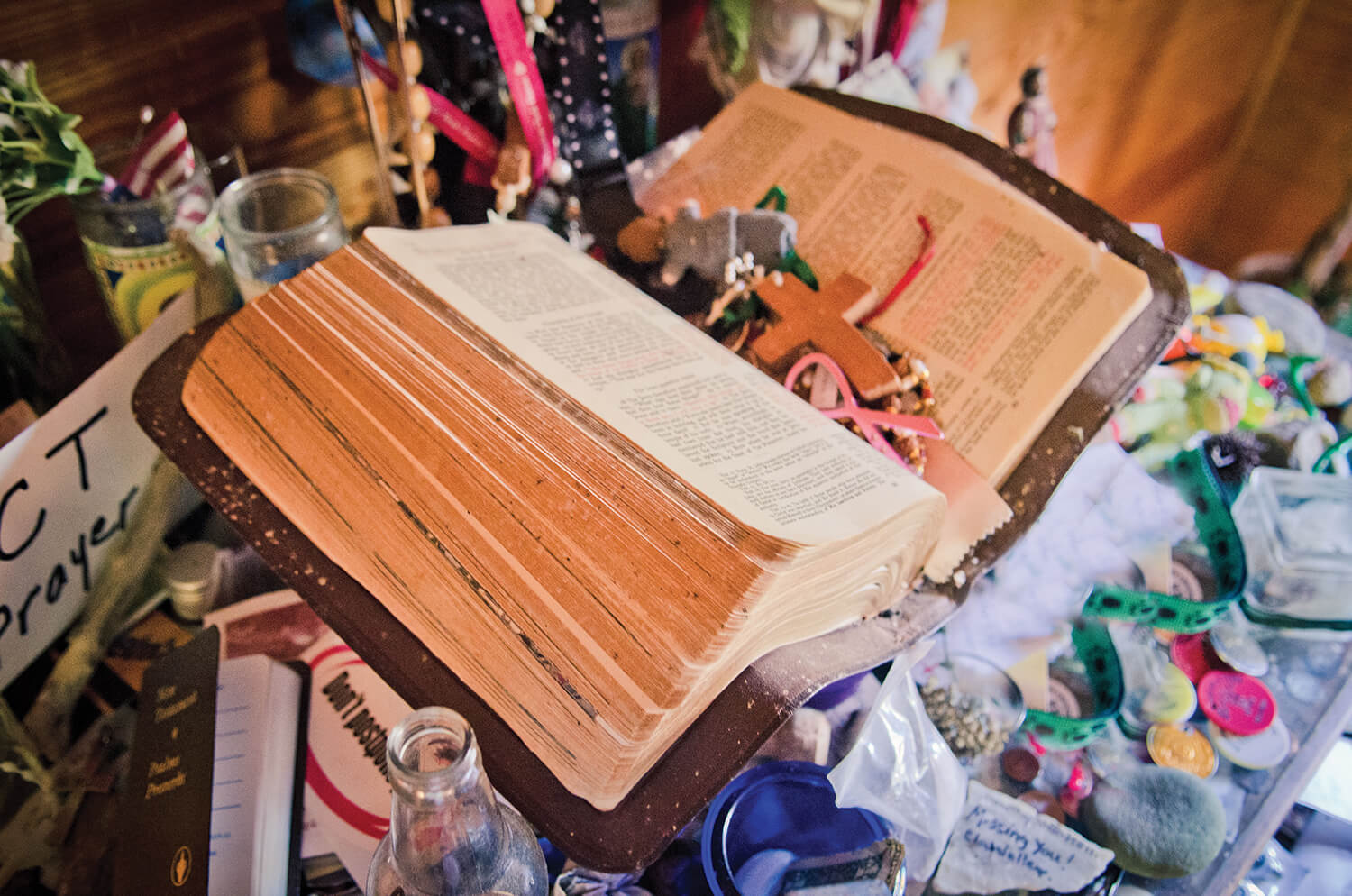 What really grabs my attention, though, is the desk against the chapel’s front wall — the altar, if you will — that’s overflowing with all sorts of trinkets and mementos. The scene resembles a shrine of some sort, adorned with photographs. And Crosses. Candles. Handwritten prayers. Rosary beads. A miniature American flag. Small stones and shells. A baseball. Coins of all denominations. A Cheerwine bottle cap.

I can only guess as to what these items represent, as almost all of them — excepting the prayers, of course — have been left here with no explanation. Who brings a baseball to a chapel and places it on the altar? And why?

What I do know, though — or at least suspect — is that the objects symbolize, in some unique way, the journey that brought those individuals here. Just as Beverly Barutio left this chapel as a symbol of her journey and the miracle she sought, anonymous visitors have left these items to represent their own life paths, whether they were seeking healing, wisdom, strength, comfort, or even a miracle.

A notebook has been left at the rear of the chapel for visitors to sign and, if they desire, to share their thoughts. The messages written there sound similar to those left at the Little Chapel of God’s Love:

“What a beautiful place to rest and reflect — thank you.”

“This chapel is a beacon of light … I’m so thankful for the peace and reflection that is always found here.”

“The most beautiful, peaceful chapel I have ever been in.”

As if to emphasize the point, a ray of afternoon sunlight slips through a stained-glass window and rests on the seat back of a wooden pew, illuminating the cross that adorns it. How beautiful. How ethereal. How peaceful.

I walk back to the altar — the baseball, the photographs, the American flag, the prayers — and it dawns on me what has happened here. Visitors have come to this chapel — this divine retreat that stands only 50 feet off of N.C. Highway 63, though it seems more like 50 miles — and they’ve left pieces of themselves.

And they’ve left with peace.

It’s a sacred exchange that’s available to all of us — in Trust, in Trinity, in Gibsonville, or wherever you happen to be. We just have to be willing to leave the highway for a few minutes.